Become a Member
Read Today's E-edition
Share This
THE THROWBACK MACHINE: Turn and face the strange...ch-ch-changes
0 Comments
Share this

This week, a video of three Gen Z actresses sent a bunch of Twitter geezers into a tizzy, all for the crime of singing David Bowie’s still-timely 1971 single “Changes.”

Sure, they were all out of tune and looked only vaguely interested, but at least they helped remind me that Bowie died this week in 2016.

Oh, how I’d love to walk you through his discography album by album. And don’t think I couldn’t, because his is one of the few I’ve memorized. For the best part getting into the music of Bowie is rolling up your sleeves and digging past those classic hits to find dozens of buried treasures. But c’mon, I know how to read the room.

Bowie never made much of a beachhead on our meat and potatoes classic rock radio landscape, with the possible exception of “Suffragette City.” Because by the time the ‘70s were half over, he was already so over gut-bucket guitar glam rock and had already moved on to plastic R&B grooves. And by the end of the decade he was detoxing in Berlin, churning out angular art-pop and setting the stage for his rightly-earned MTV mega success as the ultimate New Romantic pop icon.

THE THROWBACK MACHINE: It's the 300th Throwback spectacular!

Even after the hits dried up in the late ‘80s, his icon status would ensure that any project he worked on would get promoted. Anyone remember him showing up on Arsenio Hall in a white T-shirt and smoking a cigarette while fronting his hard-working blues-metal lad-band Tin Machine?

Bowie’s music takes me back to that sweet spot of high school, late junior and early senior years, when those “have you ever listened to?” conversations in the back of Madame Sundheim’s French class led to me suddenly being drafted into a garage band. And friends, once you’ve done that, you’ve pretty much nailed the whole “high school experience” thing shut.

And when, on a PBS documentary of all things, I saw Bowie’s famous video clip of him standing in the middle of a smoky laser vortex and singing his 1977 song “’Heroes’” (yes, the quotes are actually part of the correct title), a song that somehow I had never heard before (despite its inspirational ubiquity), I knew all at once that I must have that song in my stereo, and in my life, permanently.

And sure enough, the very next day, there I was at the (long gone) Circuit City in Champaign, holding a copy of “’Heroes’”, on Rykodisc, the record label where all their jewel cases were a green color, and actually almost talking myself out of it because…well, what if the rest of the songs weren’t any good? This is something you actually worried about back then. Well, what a mistake that would have been.

For at the time, I was disappointed that virtually all of the “Side B” songs were ambient instrumentals (I needed lyrics, man!) but it still kicked off an obsession with the man’s music. Why I didn’t start buying them sequentially from that point forward I don’t know. Instead I just sort of skipped around randomly as the months (and years) went by.

And then one year, it was all over. I had entered that period of a young adult’s life when money was slim and the childish pursuits of “buying records” understandably took a back seat. And as even more time went by, I’d sometimes look over and just stare my incomplete Bowie collection and see it as a perfect, sad metaphor for goals left uncompleted and for those carefree years when such dumb personal pursuits were long gone, and to some degree, so was the person I used to be.

But, like the song said, sometimes you’ve got to turn and face the ch-ch-changes, no matter how strange they are and eventually, time does move on. And thankfully in my case it did. Suddenly there I was, wearing professional pants and making professional money. Leave it to me to show this growth by, you guessed it, getting out my notepad and sketching out what Bowie albums I needed to finally make this particular life task complete.

And what a time it was. OK, I won’t walk you through the soup to nuts travails of plugging those gaps like I did with the much similar Lou Reed jag of a few years back, but I will just say it was a pleasant reminder as to just how much buying new music — OK, new “old” music — was something that kept me alive and kicking.

And just when I thought I was finally done, The Thin White Duke himself came out of his unofficial retirement and dropped a surprise album on everyone’s heads in 2013; and then in 2016, yet another album, which was clearly intended as an epitaph as he passed away days after it was released.

My parents got it for me as a birthday present that year, very politely disguising any puzzlement as to why they were still buying their grown son music on CD. I unwrapped it that day only to discover some of the strangest music I’ve ever heard. Yeah, the guy still had it to the very end.

As I finished up this column I took a moment to look at all those records, lined up on my shelf between Boston and Billy Bragg; all 33 of them, 36 if you count the Tin Machine records scrounged from the Mister Music cheap bin back in the day, running my fingers over them all and still feeling like it’s a tableau reflecting a lot of positive, yes, changes.

“Time may change me…” the man once sang. Probably true in my case. “But I can’t trace time”?

I still don’t quite know what that means. Maybe after I buy a few more live albums, I guess.

My Town: Clint Walker's memories of Coles County as pulled from the archives

"The Throwback Machine" is a weekly feature taking a look back at items of interest found in the JG-TC online archives. For questions, comments, suggestions, or his "Song of the Day" recommendation, contact him at cwalker@jg-tc.com.

THE THROWBACK MACHINE: You better watch out!

And all through the house, not a creature was stirring, except...a movie protested off screens after 15 days, and Clint Walker's THROWBACK MACHINE!

THE THROWBACK MACHINE: It's a time-killing TV special Christmas!

We hit the dregs of time-killing TV Christmas specials in this week's edition of Clint Walker's THROWBACK MACHINE!

Julie Coe has announced plans to seek a second term as Coles County clerk in the June primary.

George Edwards to seek another term as Coles County treasurer

The cause of a fire that caused significant damage to the enclosed porch of a Mattoon home Saturday night remains under investigation.

THE THROWBACK MACHINE: It wasn't me who gummed up the works

Oh, Computer Bus where are you when I need you in this week's edition of THE THROWBACK MACHINE! 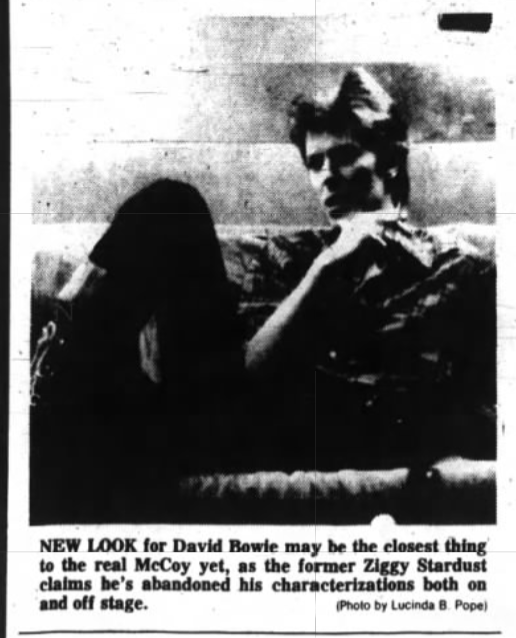 Pictured, clipped from the online archives at JG-TC.com, this photo of David Bowie, in his arty "Berlin" phase, still having to explain to reporters that he doesn't do the "Ziggy Stardust" character anymore, from the Jan. 3, 1978, Journal Gazette. Contact me if you'd like a deep cut playlist, but for those wondering, his greatest song that you've never heard is "Strangers When We Meet." Runner up: "Teenage Wildlife".