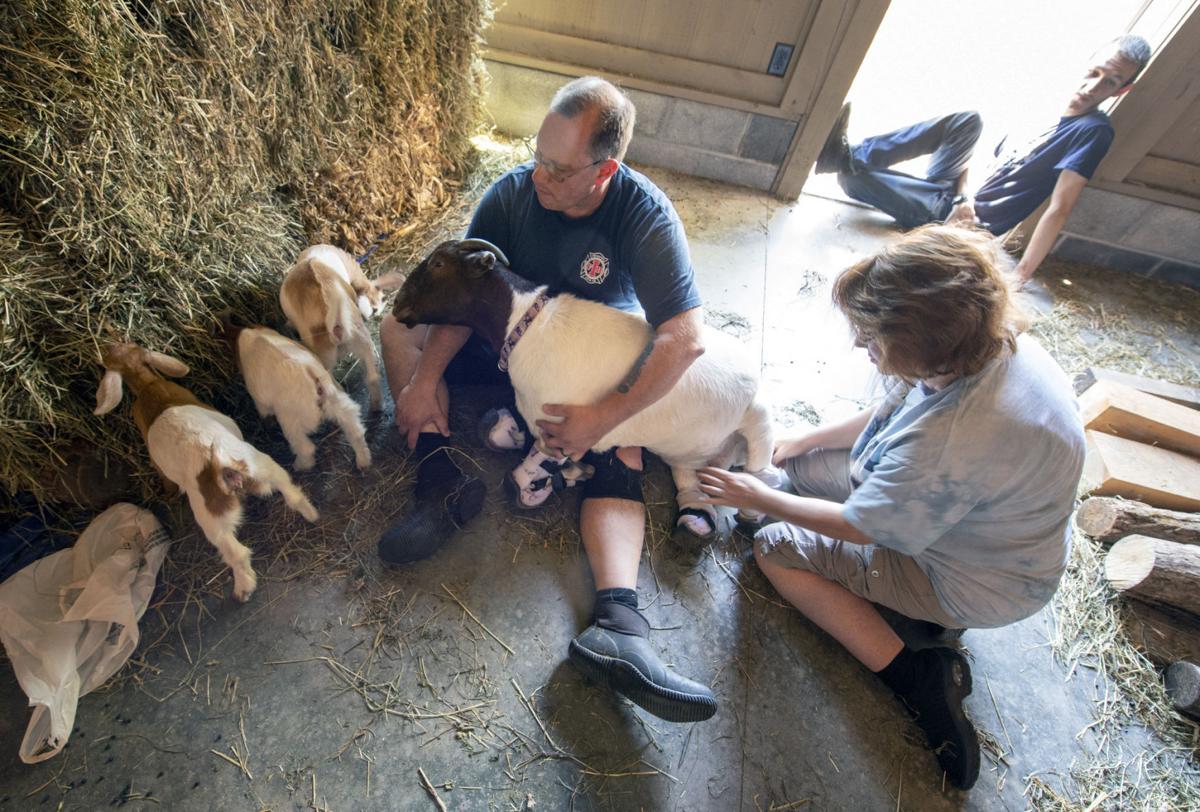 Michelle, right, and Lenny Yourth hold Anna while her prosthetics are strapped on her damaged legs on their farm in Perry County. Anna is looking after the goat kids after their mother died shortly after birthing them. 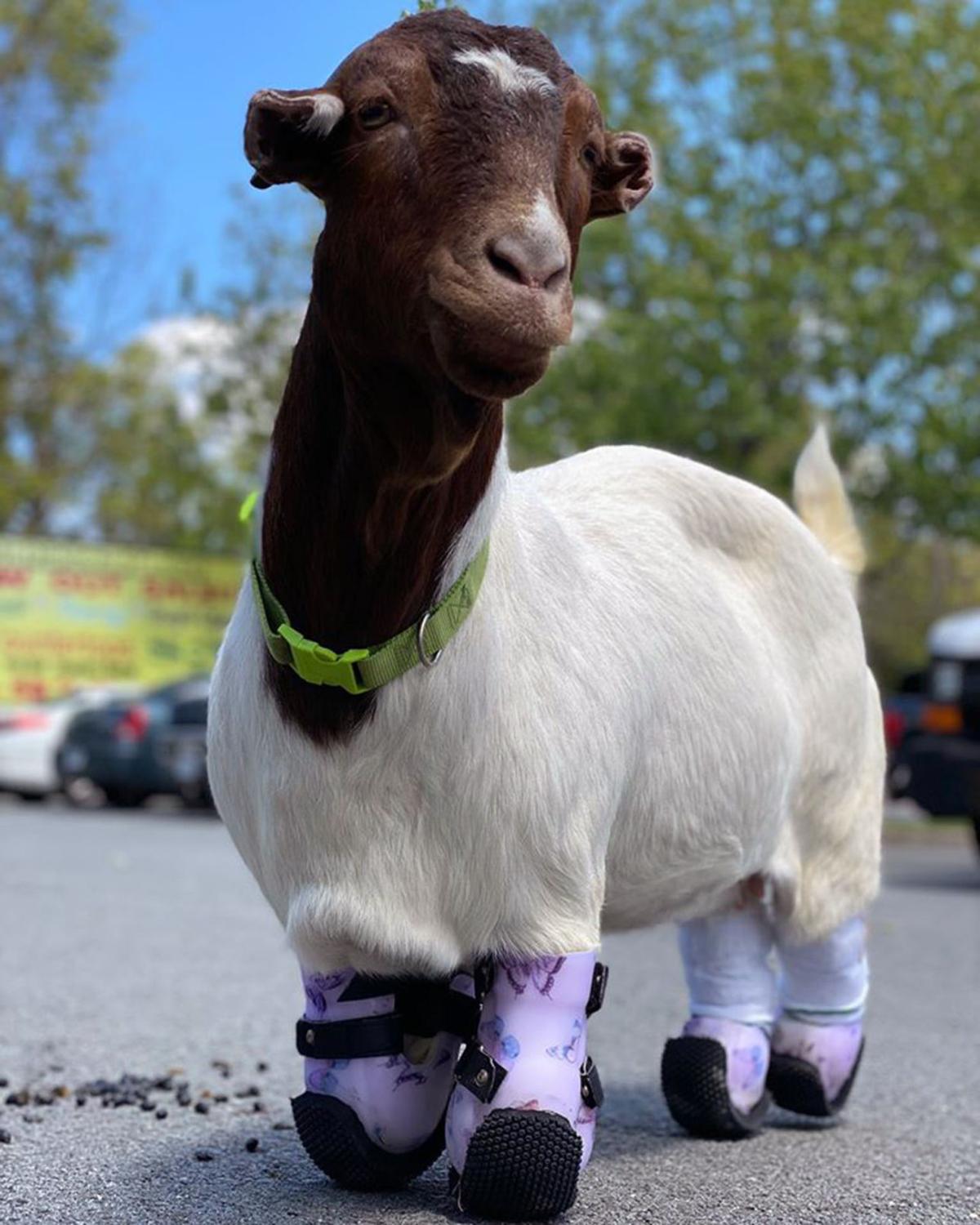 Anna shows off her new prosthetics on their farm.

MILLERSTOWN, Pa. — The Capra Farm, north of Harrisburg, is the home of second chances.

It's where Lenny Yourth moved his family from Staten Island, N.Y., after two devastating blows to his life.

There, just outside of Millerstown, he and his wife, Michelle, started over with a multi-generational family on a sprawling piece of land. With all that land, they thought, why not take on a few goats. Six years later, they have a small herd of 24.

They found that loving goats was just as important as saving them, especially a doe whose life nearly ended before it had begun.

Her name is Anna.

Born to a goat breeder, Anna arrived in the world during a polar vortex, an arctic freeze in the Northeast that caused record-breaking low temperatures in 2015. She and her twin, Elsa, named for the "Frozen" characters, suffered frostbite immediately.

It's not unusual for farm animals born in the winter to suffer frostbite, Michelle said, but the farmers hadn't cared for Anna well.

"With frostbite, the circulation goes, and the parts of you that are frostbitten rot off. Anna's legs rotted off on their own," Michelle said. "There was no surgery, nothing."

Because she had no back legs, she walked on the mid-joints of her front legs – "Imagine walking on your elbows," Michelle said. Unable to walk well, she was fed and primarily kept on a bed of hay.

"They ignored her," Michelle said.

Nearly five years later, the farmer asked around for someone to take Anna, and a veterinarian tech knew just who would take her: the Yourths.

"Without even seeing Anna, I said yes," Michelle said. The farmer described Anna as having no back legs, "and her front legs are all messed up.'"

Michelle asked if Anna could walk. The farmer told her, "She walks, but in her own way."

When the Yourths picked her up in November, she was "unbelievably overweight," from living in a hay bed and enduring a bad diet for five years. She walked on her front knees, calloused from the exertion.

"At first, she would run away," Michelle said. "She wanted no human contact; she wanted nothing from anybody."

But the Yourths knew how to make a comeback. They had done it themselves.

A New York City firefighter, he had accompanied Michelle to Brooklyn that morning to take their young daughter, Rachel, to a doctor's appointment. She has lissencephaly, a rare brain disorder.

They watched as people hurried to TV screens in the doctor's office. Two planes had hit the World Trade Center.

Called in to help, Lenny finally reached the scene after the first two buildings had collapsed. He was just two blocks away from Building 7 when it fell.

The worst terrorist attack on American soil ended the lives of 10 men from Lenny's fire company, and he lost count of the hundreds of funerals he attended, standing arm to arm with his comrades. The survivors. Soldiers in a war they hadn't signed up for.

"You're in such drone mode that you don't know how horrible it is," Lenny said. "You're just going through the motions."

Therapy followed the devastation of grief for Lenny, then a decade later, he suffered a heart attack.

Firefighting had defined him, but it no longer would.

The Yourths found themselves in a different world nine years ago when they started visiting their son at the now-defunct Carson Long Military Academy, in New Bloomfield.

They found good people in Central Pennsylvania. The waitstaff in restaurants was attentive. Drinks were refilled without asking. At four-way stop signs, drivers waved them through first.

"When you walk into a store and somebody asks you if they can help, they help you. The people are real," Lenny said.

Those people and the urge to leave the city's stresses were why they moved to Millerstown. They found a home big enough for their four kids and Michelle's parents, and it happened to sit on 12 acres of land.

The goats and chickens came a little later. Michelle wanted to find market goats, animals raised to breed or to be sold for their meat, hoping to rescue them.

"I have a knack for picking the ones that need the most care and attention," she said. At one point, the family kept two baby goats in their kitchen until they were ready to be outside.

So when the call came in November about Anna, a goat without two back legs, Lenny said, "Just tell me when I can come by with the trailer."

They had learned to let the goat build its relationship with them at their own speed. For Anna, it took time to approach her in the barn, pet her, move closer to her, touch the inside of the feeding bucket then scoop some seeds out for her to eat. Trust built slowly with her, but they gained it.

"She was so heavy, she couldn't walk that well without huffing and puffing. She was craving attention from humans," Michelle said.

It was critical to them that she have a better life than the one she had known, and that meant dealing with no back legs and two front legs that were useless below the knee. The calloused knees that she walked on caused pain they couldn't bear to see her suffer.

They took her to the New Bolton Center in Kennett Square, Pennsylvania, to X-ray her front legs. New Bolton, part of the University of Pennsylvania's School of Veterinary Medicine, is an animal hospital for large animals.

Could her front legs be straightened, the Yourths wondered. The answer was no. Because she had walked on her front knees for so long, her tendons had locked into place, tucking her hoofs up under her legs.

She would need prosthetics for all four legs, and a world-traveling prosthetic specialist would do it.

Derrick Campana owns Bionic Pets, building custom prosthetic limbs for animals around the world. In fact, Animal Planet filmed him fitting an elephant with one of his creations. The Yourths actually saw a wheelchair he made for a lame guinea pig.

They had already called three different prosthetic offices, but none of them would help. Most specialize in dogs, but Campana was different.

On the Capra Farm – Capra is Italian for goat – the mother of three triplet goats recently died when her kids were just 6 weeks old. Anna, who shared the same barn with them, became their surrogate mom.

"They follow her around," Michelle said. "If they separate, she starts yelling, and they come over to her."

They sleep near her too. And when their dog approaches, even 200 feet away, she makes snorting noises to keep him away from her small goats.

Anna lost about 120 pounds since she's been with the Yourths, following a different diet and walking around freely. She turned 5 in January.

"Goats are fun. If you handle them, they're just like dogs. They crave attention; they're unbelievably intelligent," Michelle said. "You need a good fence for a goat, though. The grass is always greener on the other side."

With a weekly newsletter looking back at local history.

FARM FOCUS: A look at agriculture in Central Illinois

Farm Focus is our showcase of agricultural producers and farmers in Central Illinois. Have a story idea? Tell us about at chris.coates@lee.net.

Michelle, right, and Lenny Yourth hold Anna while her prosthetics are strapped on her damaged legs on their farm in Perry County. Anna is looking after the goat kids after their mother died shortly after birthing them.

Anna shows off her new prosthetics on their farm.