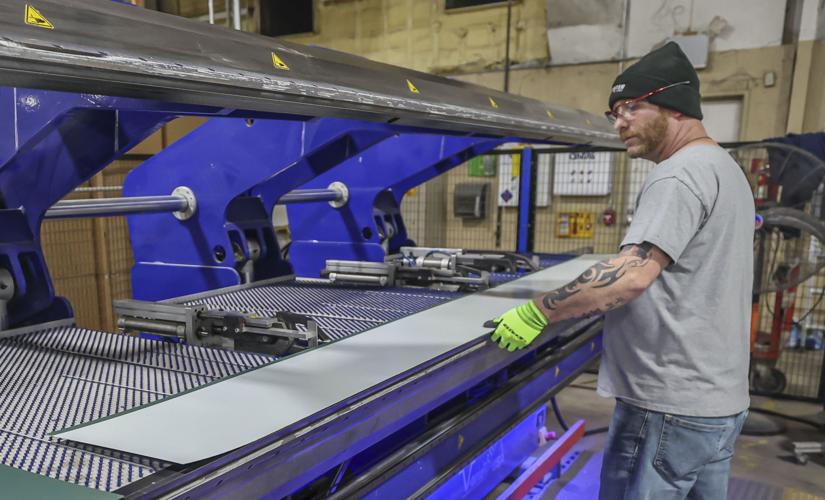 Joey May folds trim at Lester Building Systems in Charleston. Obtaining materials like treated lumber has been one of the bigger challenges the business has faced as the COVID-19 pandemic continues. 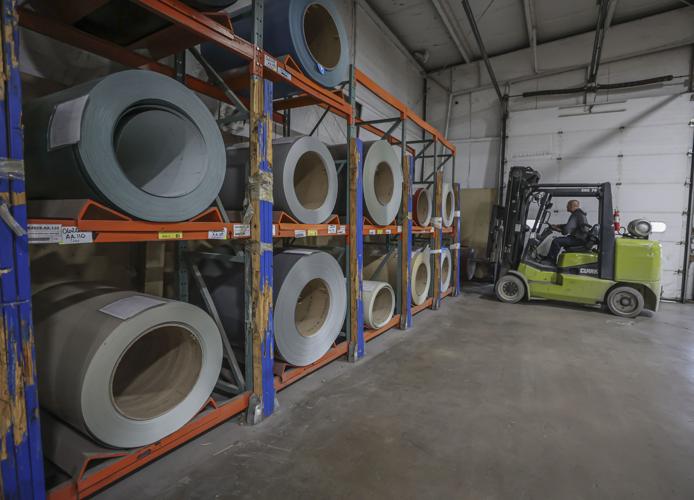 Workers unload coils of steel at Lester Building Systems in Charleston. “We’ve had our own struggles but there are business out there that are struggling much more than we are,” said Tyler Bennett, the company's vice president.

MATTOON — With the job market opening up and new businesses preparing to open, the Coles County economy is projected to grow and expand in the new year while existing business still seem to struggle with staffing shortages and inflation issues.

“For us, it’s been the collaboration across the sectors of local government, the school district, the business community and the chambers of commerce,” Griffin said. “We’re all on the on the same page and we are all working together to complement each other’s efforts.”

Griffin said there has been more activity than they anticipated when it comes to new industries and companies that are developing projects around the county, as well as existing businesses expanding their operations and looking at opportunities for growth.

Ed Dowd, executive director of the Mattoon Chamber of Commerce,  said he is optimistic about the future in Mattoon as new businesses like the North American Lighting factory, which is expected to employ up to 100 worker over the next year, prepare to open.

“We’ve had an amazing downtown revitalization plan that’s been spearheaded by the city to improve the streetscaping in Mattoon which is going to continue into next year,” Dowd said. “Moving forward, we have so many great things coming on the horizon.”

Dowd said current business like the Mars Petcare and Bimbo Bakery plants have been expanding their operations to produce other items like cat treats and Thomas’ Bagels, but are continuing to look for new employees.

Dowd said new developments are being made at the former LSC Communications Printing Co. plant after the commercial real estate firm, Phoenix Investors, purchased the property in at the beginning of last year and plan to renovate the facility to accommodate new businesses.

There is also the Lincoln Land of Sports Complex and the Hilton Garden Inn and McKenna-Yost Convention Center which plans to hire 65 full- and part-time employees and also work with interns from Eastern Illinois University and Lake Land College.

Other plans coming up this next year include the new career innovation center located in the former Consolidated Communications headquarters in downtown. The center's formal name is LIFT, which stands for Leaders Innovating for Tomorrow.

Each of the six floors of the building owned and operated by the Mattoon School District will host a variety of hands-on vocational programs for students from across the area; include a laboratory with a board casting room and areas for developing radio production, digital sound design, cinematography and video production.

Dowd said the city is also working on creating incentive packages for people moving to the area that could include tax breaks on real estate, free water and sewer for a year as well as coupons from local businesses and restaurants.

“We don’t have unemployment, we have under-employment actually,” Dowd said. “We’re working on out of the box ideas to entice people to come, enjoy employment, settle here and become part of the fabric of the community.”

Doug Abolt, chief executive officer of the Charleston Area Chamber of Commerce, said the city is doing OK now and is optimistic for the future with the planned addition of GDB International’s recycling plant in the former Trailmobile facility. The new operation is expected to create 75 new jobs.

“We’ve had some local businesses open and the shop local, buy local mindset is picking up steam alongside the amount of events being held in our square,” Abolt said. “We’re supporting our businesses and the growth in this area is important to the residents.”

Abolt said another company, Apex Clean Energy, is in the process of securing land north of Charleston for the its Coles Wind project,

The project, which is expected to include as many as 70 turbines, has the potential to bring more jobs. The biggest challenge, Abolt said, is workforce availability and filling open positions.

Abolt said organizations in Mattoon, like Elevate CCIC Inc. an innovation center for new businesses and entrepreneurs, and ongoing projects like LIFT will also benefit the Charleston School District and residents in the area looking for career pathways or learn new skills.

“The trades are good jobs for kids coming out of high school but there’s just no easy fix,” Abolt said. “Population is down, the pandemic hurt the Illinois business environment and it’s not as attractive to new businesses as neighboring states.”

Looking to hire 10 new employees, Kirby Johnson, co-owner of Gavina Graphics in Charleston, said it’s been a challenge for the last six months to hire new employees and keep some staff employed.

“Everyone is kind of fighting for the people that want to work right now and, to some degree, we have trouble keeping our staff fully employed because the competition for employees is pretty steep,” Johnson said. “There are a lot of transitory pressures on those positions because if you got a breath you can get hired right now.”

Johnson, who co-owns the business with his wife Bridget, said their business mainly creates print graphics and banners for professional sports teams and concert tours, so when the pandemic first hit, a lot of their clients cancelled orders as mass gathering were cancelled.

While in-person attendance for games and concerts returned to somewhat normal conditions this past summer, Johnson said they have had to raise wages by about 30% in the last six months to maintain and attract employees.

“It’s kind of unheard of for businesses to have that much of a wage growth,” Johnson said. “The inflationary pressures in the wage growth aren’t transitory and we’re having to pass it along to our clientele to be able to pay employees.”

Tyler Bennett, vice president of Lester Building Systems, said they have been able to do well over the past year but they relied heavily on their employees who they ask to run overtime as well as hiring temporary staff to get by with shortages.

Having been in business for about 75 years and primarily focused on manufacturing pole barns, Bennett said they've had issues this past year obtaining treated materials from their provider.

“As a society, we’ve kind of gotten away from the skilled trades and although that was already happening before the pandemic, you just come across people that are having a hard time just doing the basic functions of their business,” Bennett said. “We’ve had our own struggles but there are business out there that are struggling much more than we are.”

As for Johnson, he said there has not been much resistance from their clients but the supplies to create their graphics have gone up in price, making each order more expensive and their cash flow seemingly more unsteady.

“Even if the pandemic just magically ended tomorrow, you can’t start up a lot of these events in mass arenas a day later, they have to be planned months in advance,” Johnson said. “We’re just following the news and the pandemic and hoping it tails off.”

North American Lighting plans to open a factory and begin production this fall in an currently empty warehouse building along County Road 1000N on the north side of Mattoon.

Former Trailmobile site in Charleston gets new tenant, to create at least 75 jobs

GDB, a New Jersey-based company, joined with Charleston city and Coles Together officials on Wednesday in announcing the plans for this former semitrailer manufacturing facility

Before the city council’s meeting on Tuesday, members held a special meeting for a public hearing of the Illinois Department of Commerce and Economic Opportunity’s Community Development Block Grant program which the city is applying for $230,126 in funds.

Joey May folds trim at Lester Building Systems in Charleston. Obtaining materials like treated lumber has been one of the bigger challenges the business has faced as the COVID-19 pandemic continues.

Workers unload coils of steel at Lester Building Systems in Charleston. “We’ve had our own struggles but there are business out there that are struggling much more than we are,” said Tyler Bennett, the company's vice president. 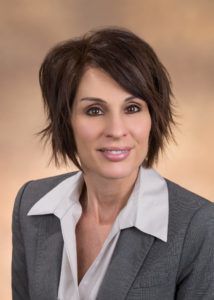 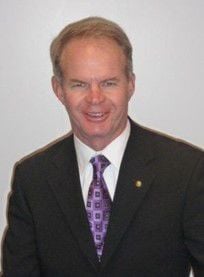 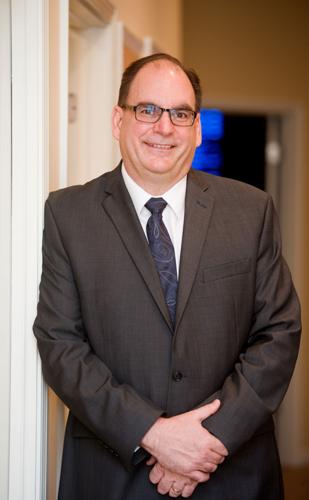