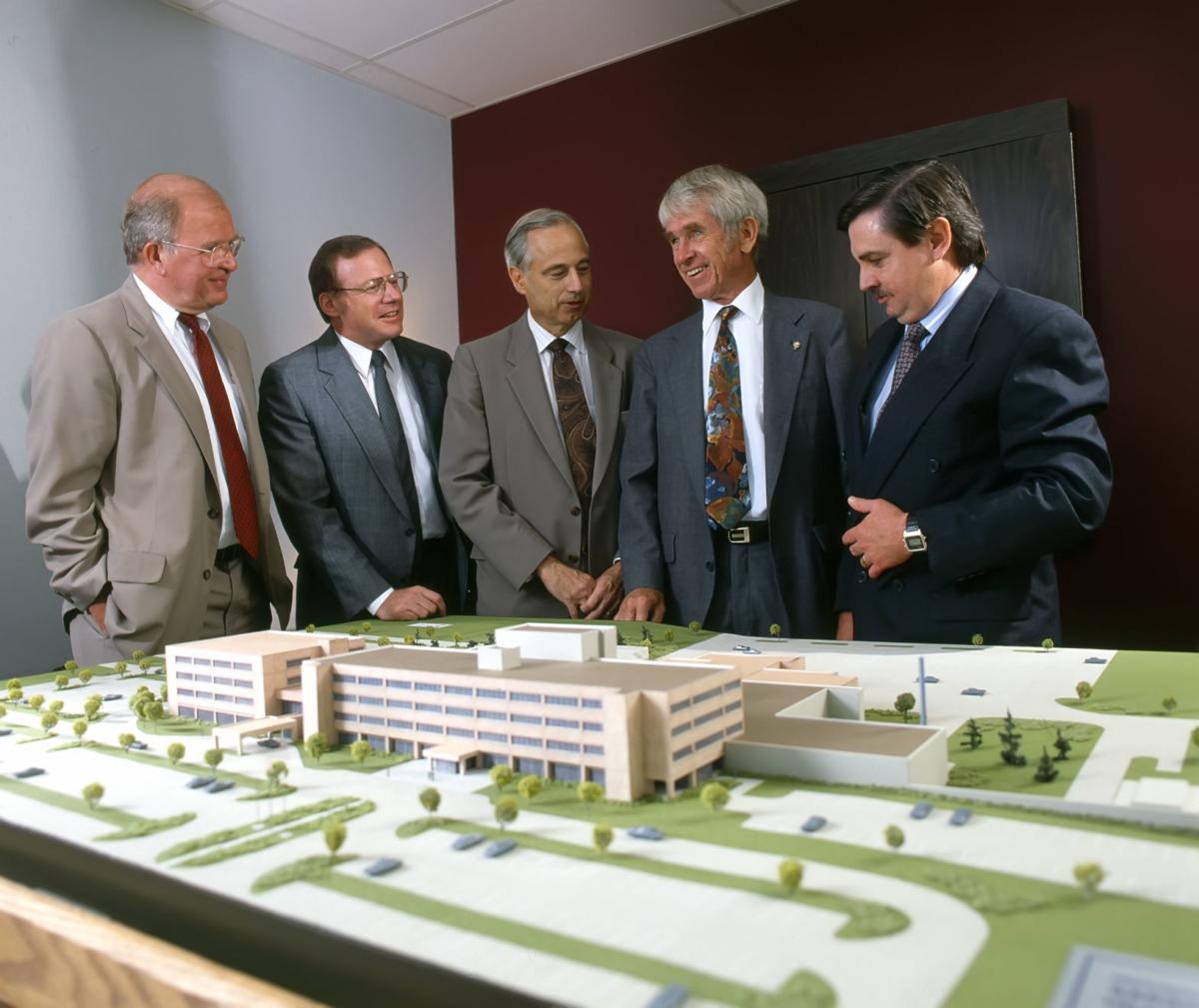 This story from the May 9, 1977 Mattoon Journal-Gazette details an open house for the new Sarah Bush Lincoln Health Center.

The thing that I'm most proud of, in terms of just philanthropic efforts, is Sarah Bush Lincoln Hospital. It's a hospital that started with a great deal of controversy. Both Mattoon and Charleston had hospitals. Mattoon had a hospital that was built back in the early 1900s and it was desperately behind the times. Charleston had had a hospital of about the same vintage, but they had had a fundraiser and … they built a new hospital. But the funds they had were not sufficient to build a modern hospital. What they really built was kind of a first aid station with beds. And it was really inadequate for the needs of the Charleston community and Eastern Illinois University. And so there were a group of us who came up with the idea that we ought to try and find a way to try and merge those two hospitals and if we did, we all of the sudden had a size that would be viable and you could have a really modern hospital. That was strongly resisted. The people in Charleston, in particular, felt that Mattoon, this is the way they expressed it, was trying to steal their hospital. They were very proud of their hospital, but again it had very limited capabilities. And Mattoon's hospital was a forgone conclusion. It had to be replaced. I was asked to serve on a committee that was going to figure out how to do it. It consisted mostly of leaders in the community who were in their 70's or 80's and I was maybe 40 at the time. I was the only younger, so to speak, on this committee. And the committee met several times one summer in the evenings and they would talk about all the problems that they were going to encounter. And they finally came to the conclusion that it couldn't be done and they disbanded. I didn't agree with that. And so I also had made friends with the administrator of the Mattoon hospital. He was a well-educated, bright guy and we started having coffee together and he would send me articles on hospitals and so forth and we decided to make a really full-throated effort to convince Charleston that we ought to put these two hospitals together. I took on that task and I went over to Charleston and I called on all the directors of the hospital and others, some of the doctors, and I got a lot of “don't talk to me about that” and “that will never happen.” And I got a few people that said, “you know something like that really needs to be done and we agree with you.” And we had enough of them that we put together a potential board of directors for a new hospital. The financial community was not interested in financing either one of us, standalone, but when they said we were going to put the two of us together, all of the sudden we have a viable size. We got some financial commitments and we hired a consultant to design the hospital and come up with an estimate of the price of building a hospital, we negotiated to buy the land between Mattoon and Charleston. And we used to say it couldn't have been a hundred feet either way. It had to be as close to the middle of the two communities as you could possibly get. Subsequently, we put together a group of men to raise money and I think we were able to locally raise 2 and half million dollars. The telephone company, the Lumpkin family were both large donors to that, and we financed the rest of it and we built the hospital. The interesting thing is we captured a market, which is south of Springfield, Decatur and Champaign. The hospitals in each of those cities felt they had the Southern Illinois market to the south, but we kinda stepped in half way between and pretty much captured that market and we compete with those three hospitals today.

'Persistence. I think is important. You know, sticking with something you believe in and finding support, you have to go out and kiss a lot of frogs, as they say. We were able to do that.'

Richard A. “Dick” Lumpkin, founding director and former chairman of the Consolidated Communications Board of Directors, was remembered not onl…

This story from the May 9, 1977 Mattoon Journal-Gazette details an open house for the new Sarah Bush Lincoln Health Center.