A view from the Brock grain bin service platform provides a view of the flurry of activity down Eleventh Progress Street during the first day of the Farm Progress Show. 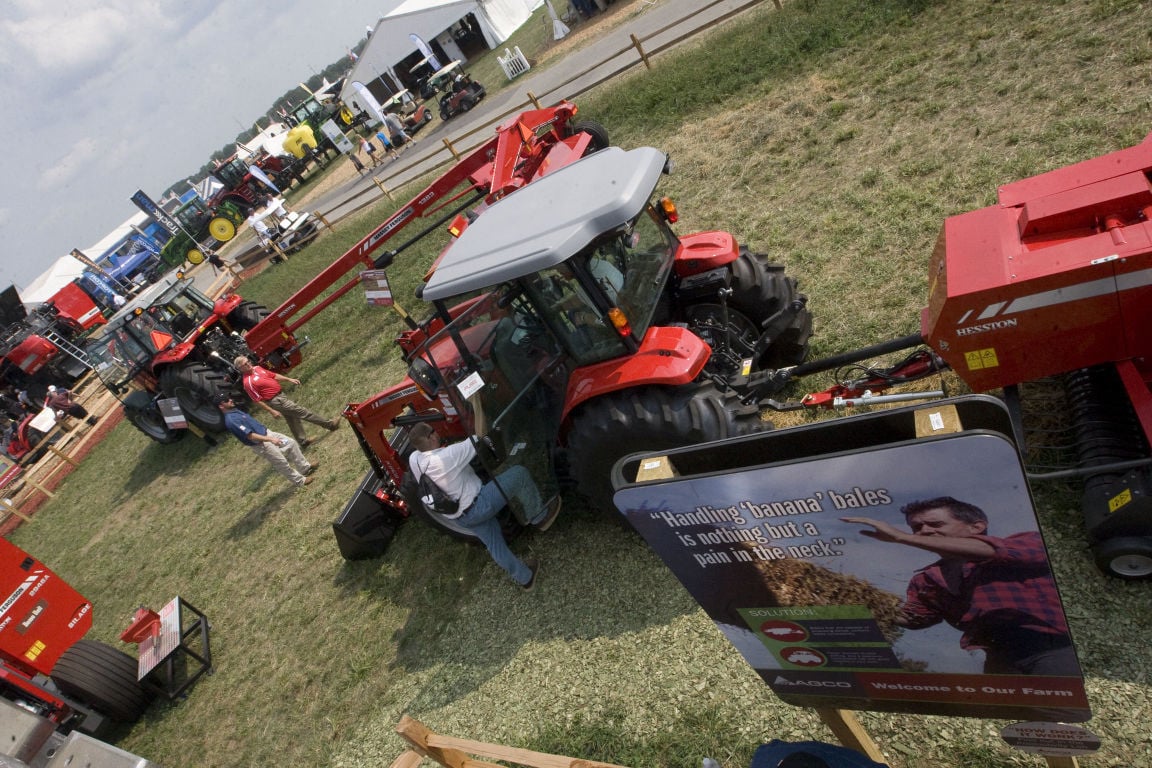 The Agco site had an elevated platform that allowed visitors to look over both their site and the entire show.

DECATUR — Jim and Joan Mahon were back in Decatur on Tuesday marveling at what they saw during the first day of the Farm Progress Show.

They particularly enjoyed seeing the Agco exhibit, which was set up to take visitors through displays of its equipment used throughout the growing season.

The Mahons were among the thousands of visitors who made their way from around the world to Progress City as the show opened its three-day run. It continues from 8 a.m. to 5 p.m. today and 8 a.m. to 4 p.m. Thursday.

The equipment is different from when Jim Mahon operated Decatur Farm Supply, which moved from the 300 block of East Main Street in Decatur to Macon in 1958.

“It's changed a bunch,” said Mahon, who now lives in Texas. “It's the size of everything, and the cost is overwhelming.”

Mahon remembers when similar equipment to what he saw at the Farm Progress Show went for $7,500. Now some of it costs as much as a house, he said.

Agco wanted to change its exhibit this year to catch the attention of local farmers, said Phil Jones, the company's marketing services and creative manager.

“It's telling a story,” Jones said. “This is completely different than what we've ever done.”

Instead of having the equipment just sitting in their area, it was displayed as if they were being used in the various stages of the production year. The display begins with a tillage equipment breaking ground and ends in a grain bin. In between, there is a sprayer displayed over bright green soybeans, and a combine preparing to munch on a final patch of dried corn.

Jones worked with Farm Progress Show host farmer David Brix and FFA students from Heartland Technical Academy in Decatur to plant the corn and soybeans in the middle of the exhibit area. To pull off the illusion of a production season, timing was everything. The corn was planted early in the season so that it would be ready for “harvest.” The soybeans, on the other hand, were planted at the beginning of August so they would be in the “spraying” stage of development.

Agco was debuting equipment that it hopes will help farmers boost productivity in the various stages of crop growth.

“Whether they have big or small operations, they take what they've got and make the best of it,” Jones said. “They can only control so much.”

With all the effort that went into designing the display, Jones said it was satisfying to see the smiles and engagement from visitors. Jones tried using a similar design last year during the Farm Progress Show in Boone, Iowa.

A platform in the middle of the exhibit provided views that Jones hoped caused visitors to think differently about the farming experience.

Equipment companies are continuing to innovate despite a downturn in the agricultural economy. Innovation is everywhere throughout the Case IH exhibit, said Tony McClelland, a crop production marketing manager.

Farmers can make a difference on the outcome of the next growing season starting with how fields are harvested in the fall with tillage work and use of equipment that reduces residue, McClelland said.

“All those things allow for a smoother finish,” McClelland said. “They can really see it in the spring.”

Planting equipment that allows for a uniform distribution of seed becomes important in the spring, especially given recent wet weather during planting time, he said.

“If equipment is holding them back, it can be the difference between getting a crop in and not at all,” McClelland said.

“We don't discontinue our investment in innovation,” Walker said. “We want to be in a position to grow our business and make sure we're doing things profitably so we're here for the long run.”

The farm show comes at a good time in the marketing year for John Deere, spokesman Barry Nelson said. The show is the first chance for growers to see the equipment and learn about the new features it offers, particularly in terms of operator comfortability.

“They're in there all day long,” Nelson said. “The technology has helped them become more efficient at what they do.”

“We want to help them squeeze every penny to make a profit possible,” he said.

He said John Deere is debuting some of its largest tractor models during the Farm Progress Show.

Exhibitor shows system that can plot information from 200 field locations.

DECATUR – When you're focused on feeding America, it's easy to forget to take care of your own health. But hardworking farmers who step down f…

A view from the Brock grain bin service platform provides a view of the flurry of activity down Eleventh Progress Street during the first day of the Farm Progress Show.

The Agco site had an elevated platform that allowed visitors to look over both their site and the entire show.