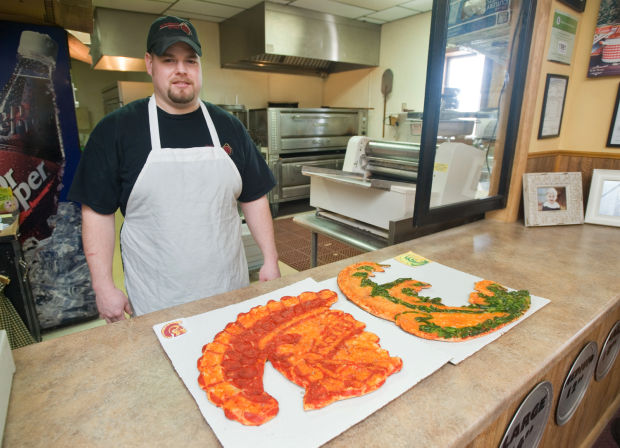 Owner Trent Groothuis stands by a Charleston Trojans pizza, left, and a Mattoon Green Wave pizza that he made at The Greathouse of Pizza in Casey on Wednesday. 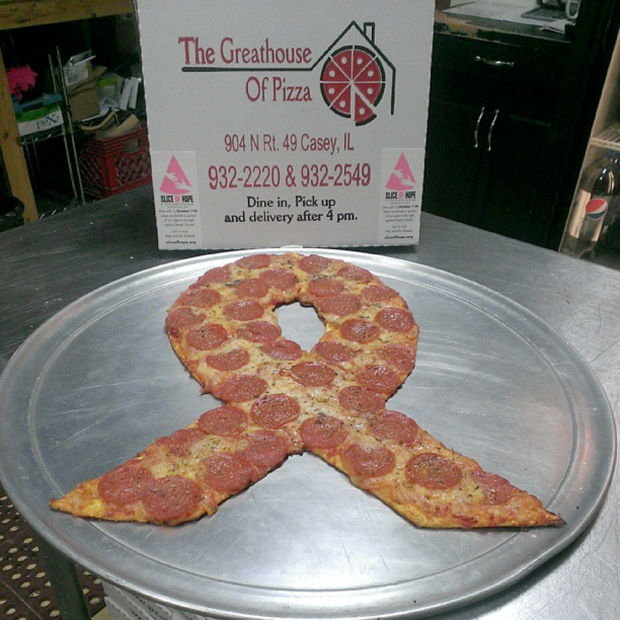 Shown is the first pizza art made by Groothuis. It was a ribbon in support of a fundraiser the company does annually to help in the fight against breast cancer. 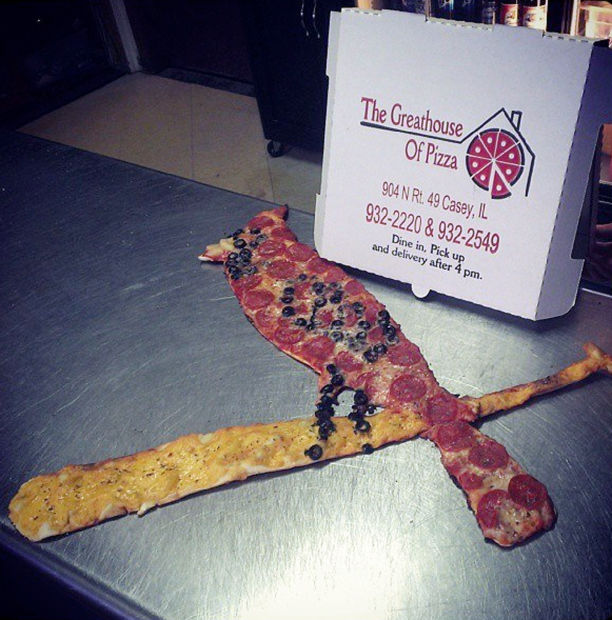 Shown is a pizza art creation by Trent Groothuis, owner of The Greathouse of Pizza in Casey. 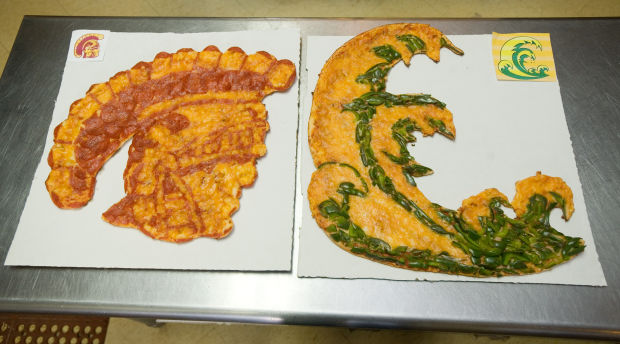 A Charleston Trojans pizza, left, and a Mattoon Green Wave pizza are shown at The Greathouse of Pizza in Casey on Wednesday. 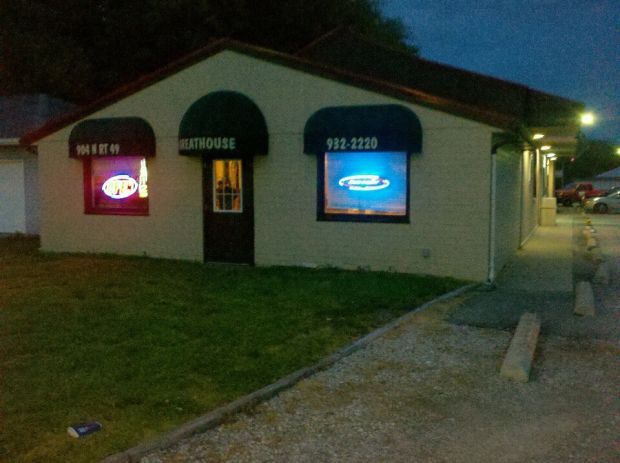 CASEY -- A jalapeno popper pizza is not the only newly designed pizza created with a homemade, personal touch by owner Trent Groothuis at The Greathouse of Pizza in Casey.

Groothuis, who has been in the pizza business since 2002 and bought The Greathouse of Pizza in 2008, has been designing unique pizza art for more than a year. The art, which focuses primarily on sports logos or current events items, keeps gaining more and more attention.

"The pizza art started one day in October of last year when we were doing a fundraiser that we do every year called The Slice Of Hope for the Karen Mullen Breast Cancer Research Foundation," he said.

"It is a fundraiser where a number of pizzerias around the U.S. donate a percentage of their sales to the foundation on the given day in October," the pizzeria owner said. "I decided to make a cancer ribbon pizza and take a pic of it and put it on our Facebook page and Instagram page. The pizza got a lot of 'likes' and 'shares' as well as comments. It even got featured in the magazine Pizza Today."

He said he was so excited about the overwhelmingly positive response that he decided to do a Cardinals logo when the Cardinals made it to the World Series last year. He put photos on social media including Facebook and Instagram and again received a lot of "likes" and "shares."

At the time, Groothuis, who started his career working at Pagliais in Charleston, was actually living in a little apartment at the back of the Greathouse of Pizza restaurant and would work on the creations late at night. Since then he has made more than 30 pizza art designs.

"Whenever I have a little time on my hands, I will make an art pie and put the pics on social media to try to get some responses," he said. "People seem to like them so I just keep doing them when I have time."

Some of the recognition the pizza art has received includes:

Groothuis is the sole designer in all of the creations with the exception of a Tony Romo Jersey dessert pizza. He said one of his employees helped him make that one for her husband's birthday.

The artist doesn't need any special equipment as he works. He said he uses pizza boxes to cut out his templates. He places the templates over the rolled-out dough. He said sometimes it doesn't work, and he just has to go ahead and freehand the design.

Groothuis uses materials he already has, including a dough roller, pizza oven, pizza sauce, cheese and other toppings. He will sometimes have to buy vegetables to coordinate the colors he needs within the designs. For the dessert pizzas, he might have to buy blueberries for blue or strawberries for red.

"I find it rewarding when someone who has never been in before from another town comes in and says they saw my pizza art on Facebook and decided to stop in and try our pizza," said Groothuis. "We seem to be getting a lot more of that from Terre Haute area, Robinson area, and Mattoon/Charleston lately."

Also, here is the link to a video of Terre Haute News Channel 2 news item on the Great House of Pizza https://www.youtube.com/watch?v=gfixeH3eBsk.

MY AMISH HOME: Stirring no more than necessary

See what's going on in Millie Otto's world in this week's My Amish Home column!

Nye's videos have been viewed over seven million times since he posted them.

Dear Abby: "Darlene" and I have been friends for 40 years. She moved to Arizona with me in the ’80s from Michigan. Her boyfriend drove out and…

Harmful algal blooms, also known as “red tide,” happen when some types of blue-green algae grow out of control or “bloom.”

Face masks that do double duty — from hydrating to high style

Now that protective face coverings have become part of everyday life, the choices are endless.

Dear Abby: I'm in my early 30s. I live and work in a beach town and visit the ocean often on my time off. I have a large tattoo on my side, an…

Public bathrooms are risky during the pandemic. These safety tips can help

Bathrooms — especially communal ones — are the perfect storm of shared spaces, poor ventilation, and floating aerosols that can make us sick.

YARD AND GARDEN: Ever had a chigger bite?

If you are new to gardening, deadheading is the process of removing flowers that are past their prime and are said to be spent.

Dear Abby: Cross-country relationship is kept a secret from mom

Dear Abby: I'm in high school. My boyfriend lives across the country in a different state. He is a teenager, too. I have asked people for advi…

Dear Abby: I have been in a relationship with the same man for 15 years. For the last six, we have been living together. He's a machinist who …

Arizona Covid-19 patient: I woke from a coma paralyzed

Microsoft and Land O'Lakes are investing in rural communities

Microsoft and Land O'Lakes are investing in rural communities

Owner Trent Groothuis stands by a Charleston Trojans pizza, left, and a Mattoon Green Wave pizza that he made at The Greathouse of Pizza in Casey on Wednesday.

Shown is the first pizza art made by Groothuis. It was a ribbon in support of a fundraiser the company does annually to help in the fight against breast cancer.

Shown is a pizza art creation by Trent Groothuis, owner of The Greathouse of Pizza in Casey.

A Charleston Trojans pizza, left, and a Mattoon Green Wave pizza are shown at The Greathouse of Pizza in Casey on Wednesday.