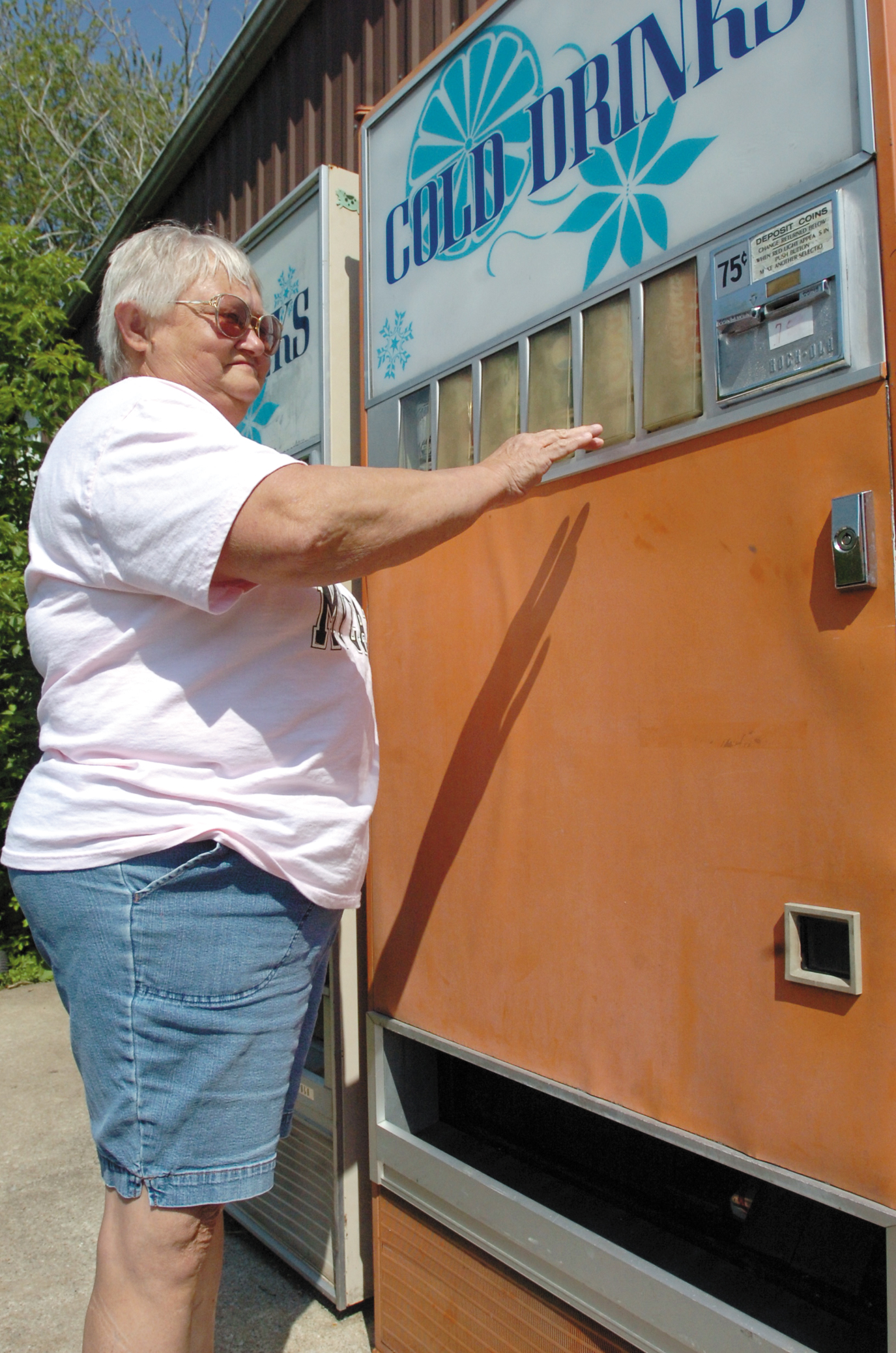 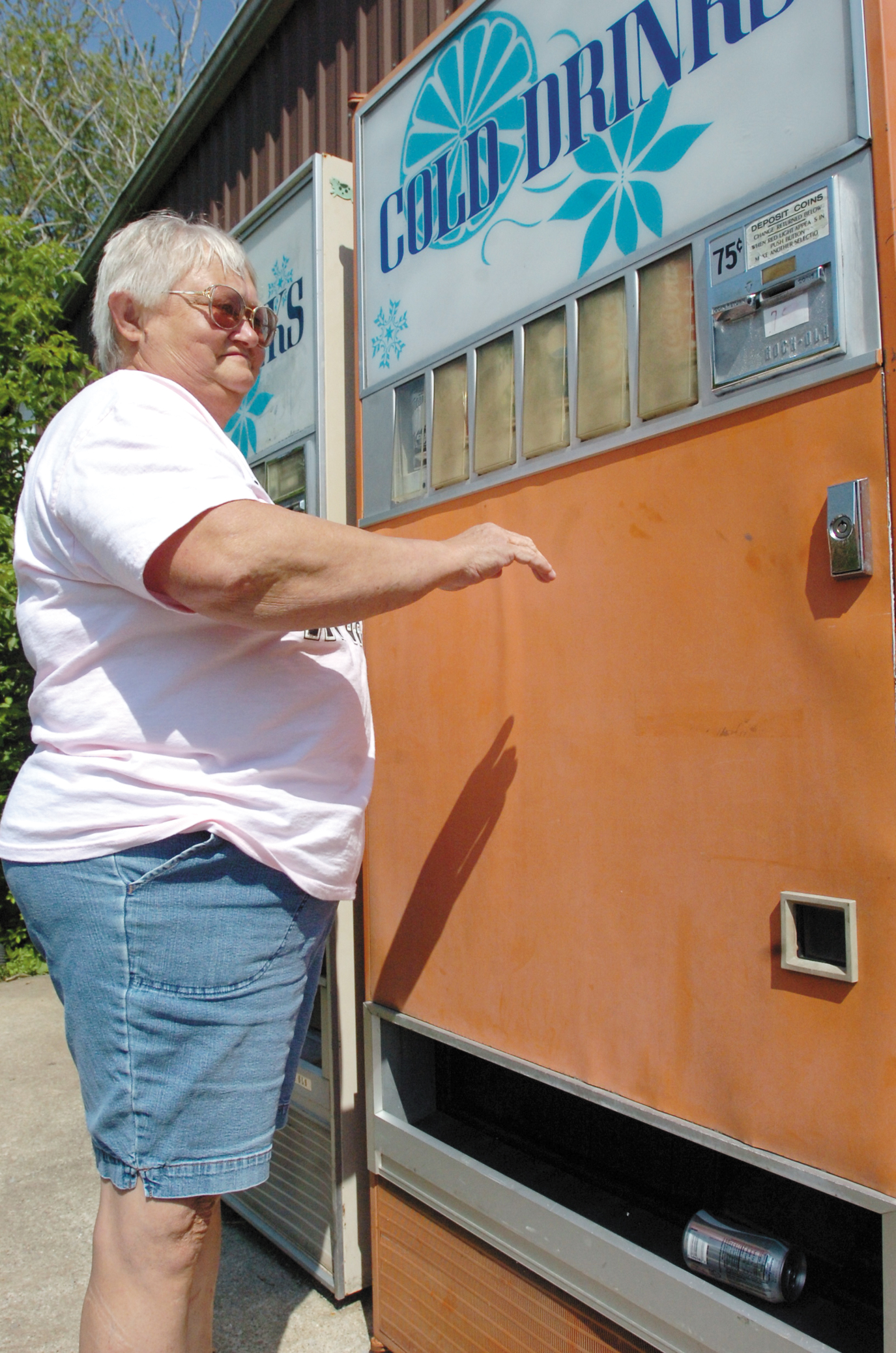 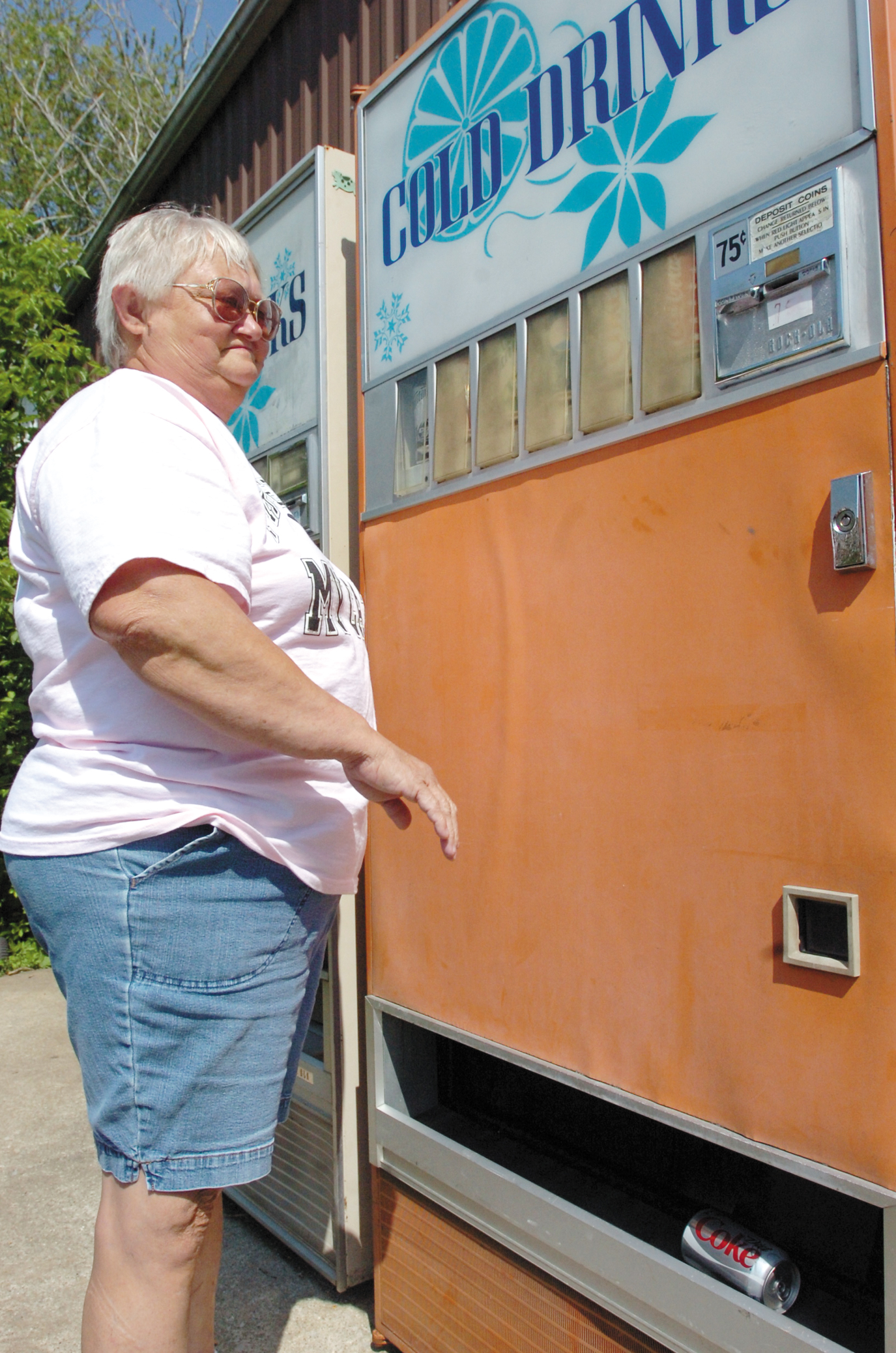 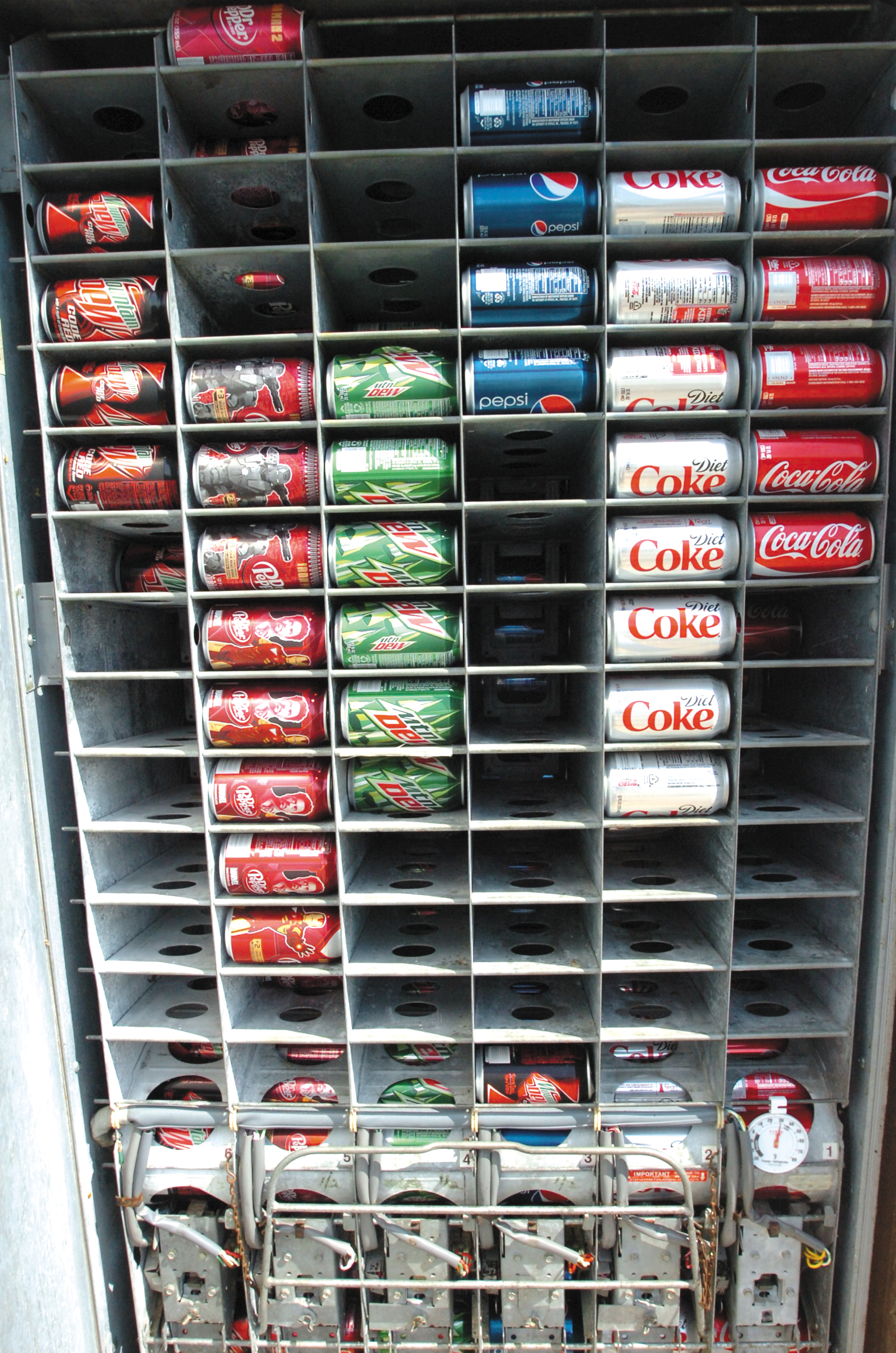 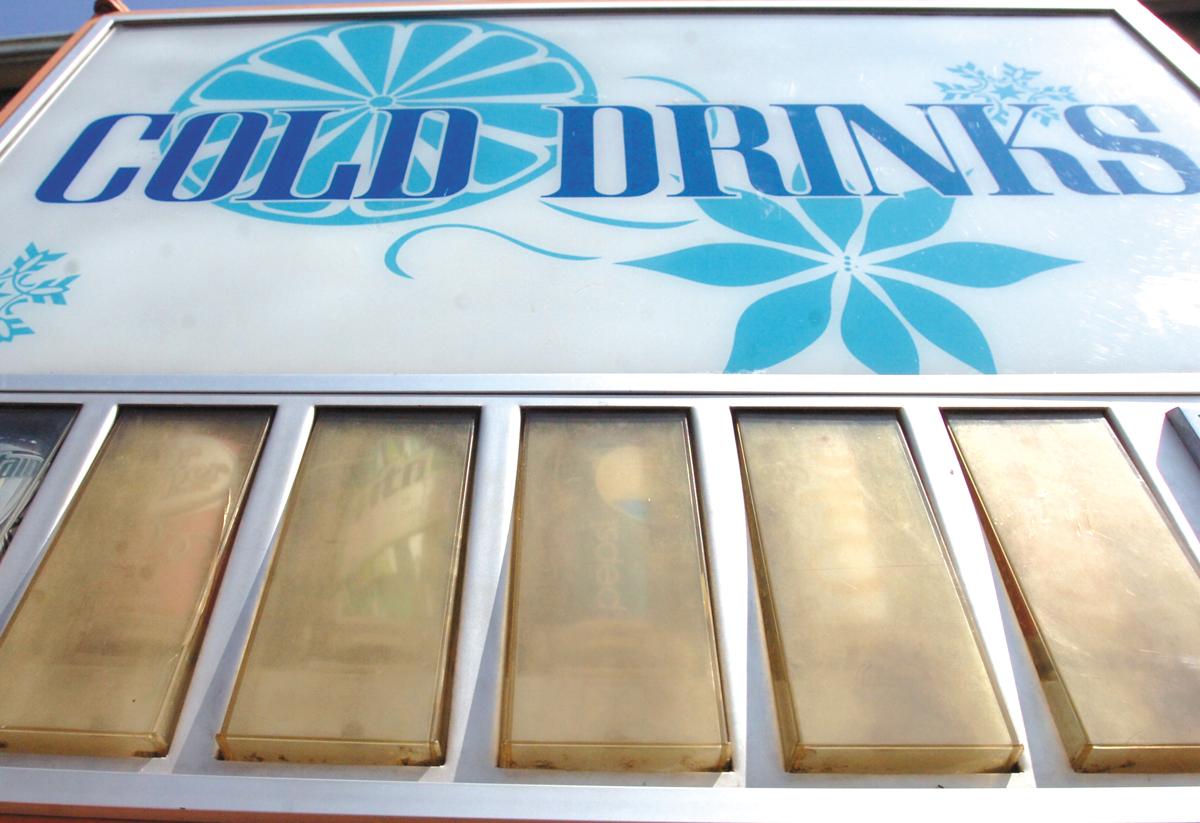 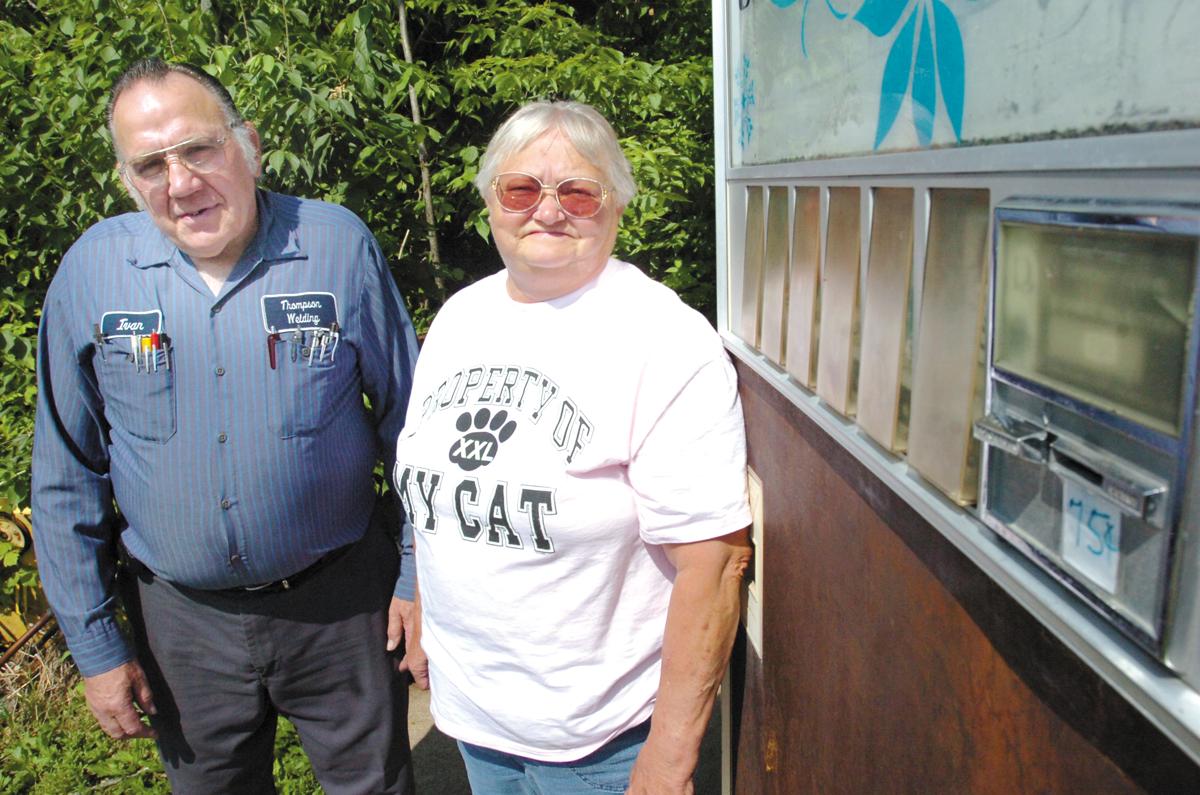 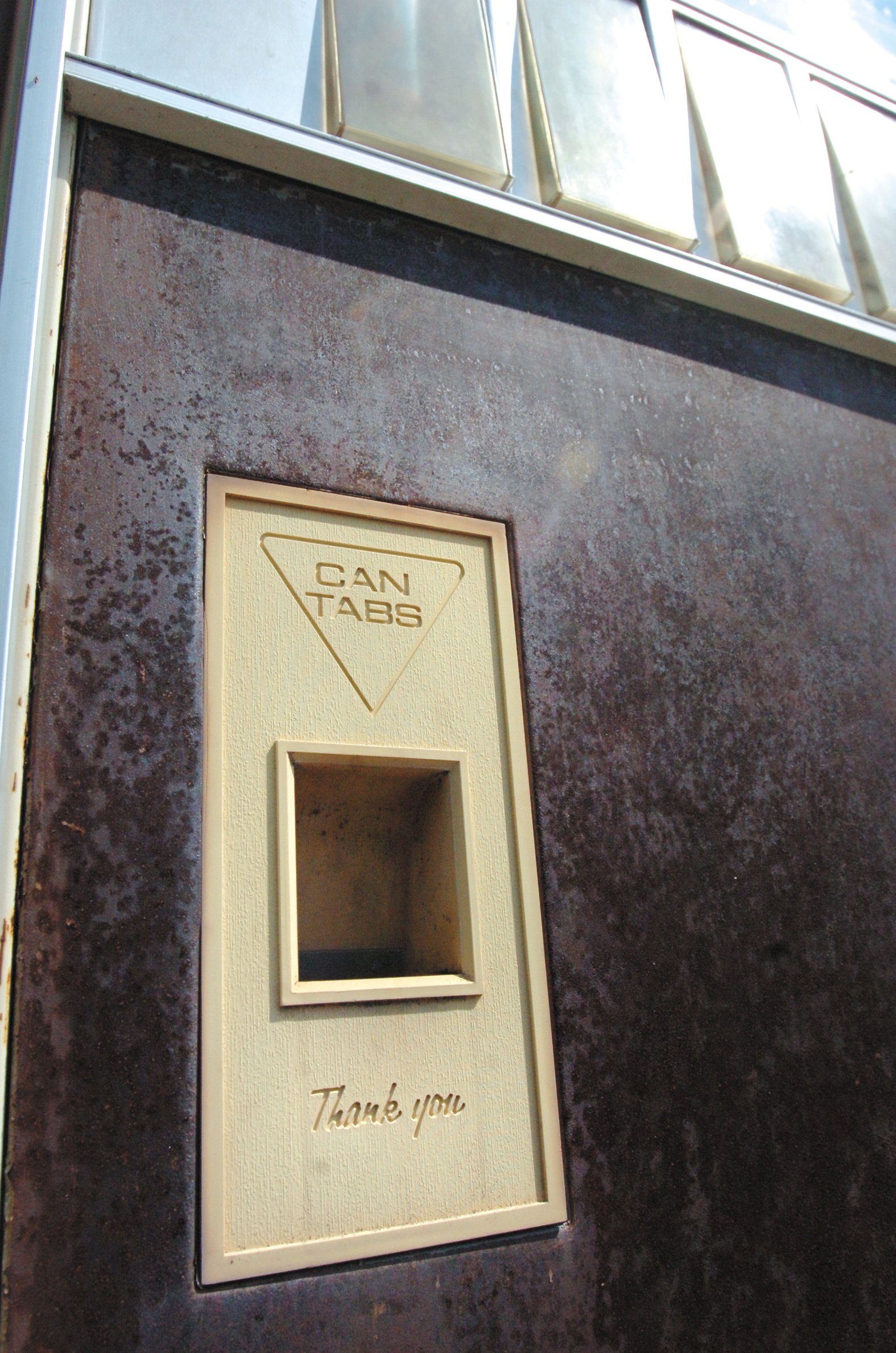 Actually, there are two pop machines, equally fast, but they are treated as one “fastest machine” on Facebook.

They belong to Ivan and Dorsie Thompson, and are located outside Thompson’s Welding Service and Lawnmower Repair shop on Main Street in Lerna.

Fans say a customer cannot press the “select” button and catch the can of soda with the same hand. It’s that fast.

While the machine some describe as “mystic” has brought a certain amount of notoriety, the village isn’t without more scholarly attention as the home of nearby Lincoln Log Cabin State Historic Site, Lincoln Farm, a working mid-1800s farm, and nearby Shiloh Cemetery, burial place of the 16th president’s father and stepmother.

Although Facebook fans most likely don’t want to know, Mrs. Thompson explained that the pop machines are “older models that have micro-switches, causing the cans of pop to drop so quickly.

“The new ones have to bring the pop around and then drop it,” she said.

Fans who have posted remarks on Facebook prefer to consider it magic.

“I wouldn’t have believed it if I hadn’t seen it with my own eyes,” is another.

Others include: “It reads your mind...”; “the Chuck Norris of pop machines”; and “seeing is believing.”

One post, however, reads, “My grandpa wasn’t impressed when I told him about this... He said they all used to be like this.”

According to Facebook fans — currently more than 1,400 of them — the pop machine somehow knows what the thirsty person wants before the choice button is pushed; and a can of soda purchased from the machine will magically stay cold for hours.

Photos and videos of the pop machines delivering cans of cold beverages in the blink of an eye can also be seen on Facebook.

Ivan Thompson said while “fastest pop machine” fans may not have increased business at his shop, “high school and college kids come down by the carload” at all hours of the day and night, especially on weekends.

Thompson has been in the welding, and later, small engine repair business for nearly 40 years. And evidence of the years is plain in the building he occupies.

“I’ve accumulated a lot,” he said. “I’m not the kind of person who can throw stuff away.

“The problem is, stuff is cheaper than it used to be, and people aren’t going to spend $50 to fix something they paid $50 for when they bought it. They just pitch it and go buy a new one.

“You can see on the wall all the weed eaters and stuff I’ve accumulated that people didn’t want to pay to get fixed, but they didn’t want to throw them away.”

Thompson said he always thinks “there’s a part on that piece of equipment I can use.

“It makes it hard to throw stuff away. But, you get so much stuff layin’ around that you gotta remember where you put it to use it.

“I haven’t got into the computer stuff,” he said. “A good memory is important. A lot of times I can just go to my parts bin and pick out what I need instead of having to look it up in a book.”

Thompson said he does all the work himself with no employees to help.

“My wife takes care of the pop machine. We get the pop in town and she helps me fill the machines.

“She also does the bookwork. As long as I can keep it straightened out so she can write it in the ledgers, it works pretty good. If not, she lets me know,” he said.

Main Street hasn’t changed very much in the last half-century, he said. The buildings are still there, but not the businesses.

“When I first got here, there was a grocery store/restaurant in the brick building on the north side,” Thompson said, “and there was a laundromat on the west side of the building. The bank was there until it moved across the street.”

The restaurant and laundromat long gone, the building is empty except for an apartment upstairs, he said.

Locals used to gather in front of the welding shop to cuss and discuss what they read and heard on the news, as well as pass on a little Lerna “small talk.”

“I used to have a couple of those plastic benches and chairs out there in front,” Thompson said. “They’d come and sit and talk awhile.

“But two years ago our big shade tree fell down and since then (people) don’t come like they used to. They’ll come inside and talk, but it’s not like it used to be.

“Everybody gets their mail from a Post Office box and a lot of people gather over there to talk when they pick up their mail.”

Then, there are Thompson’s customers, people like Don Pearcy, mayor of Lerna for 13 years, and Max Jaeger of Mattoon, a retired Lake Land College instructor, who stop to chat a moment or pick up a repair.

“Ivan’s a craftsman. What he can do with small engines and repairs in general is just amazing,” Jaeger said. “I’ve been one of Ivan’s customers for years. He’s a treasure. We’re lucky to have him.”

Bill Duey opened the Fit-2-Serve building in 2014 in a former church, 1320 Lafayette Ave., and planted its first community garden there.

Mattoon and Charleston police said the person who died was driving a vehicle that fled from officers during earlier traffic stop attempts.

One of the defendants was allegedly in possession of firearms as a felon, approximately 226 grams of meth, and U.S. currency.

No injuries were reported to civilians or firefighters during the house fire in Mattoon.

Two people died Wednesday when an oncoming vehicle pulled into the path of another in rural Effingham County.

Have you seen this man? Mattoon police seek help

The Mattoon Police Department is seeking help from the public to identify two people.

The Charleston school board approved of the creation of the new extracurricular during its meeting Wednesday night.

Body found in Wyoming believed to be Gabby Petito

Authorities say a body discovered Sunday in Wyoming is believed to be Gabrielle "Gabby" Petito.

It took a two-hour battle for a Warrensburg man to catch a monstrous, 750-pound alligator in Mississippi — and it had an ancient surprise inside.

Watch Now: Why are there more floods?