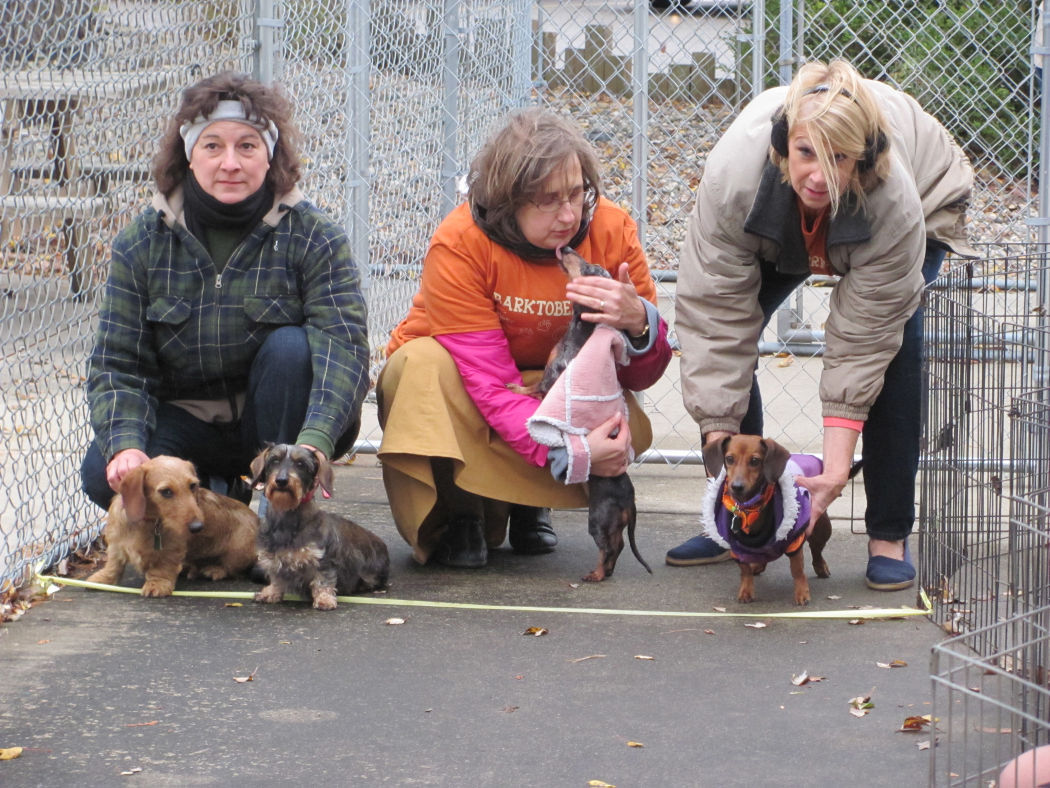 Participants are pictured forming up at the starting line for the Dachshund Dash during the Charleston Area Dog Club's annual Barktoberfest on Saturday. 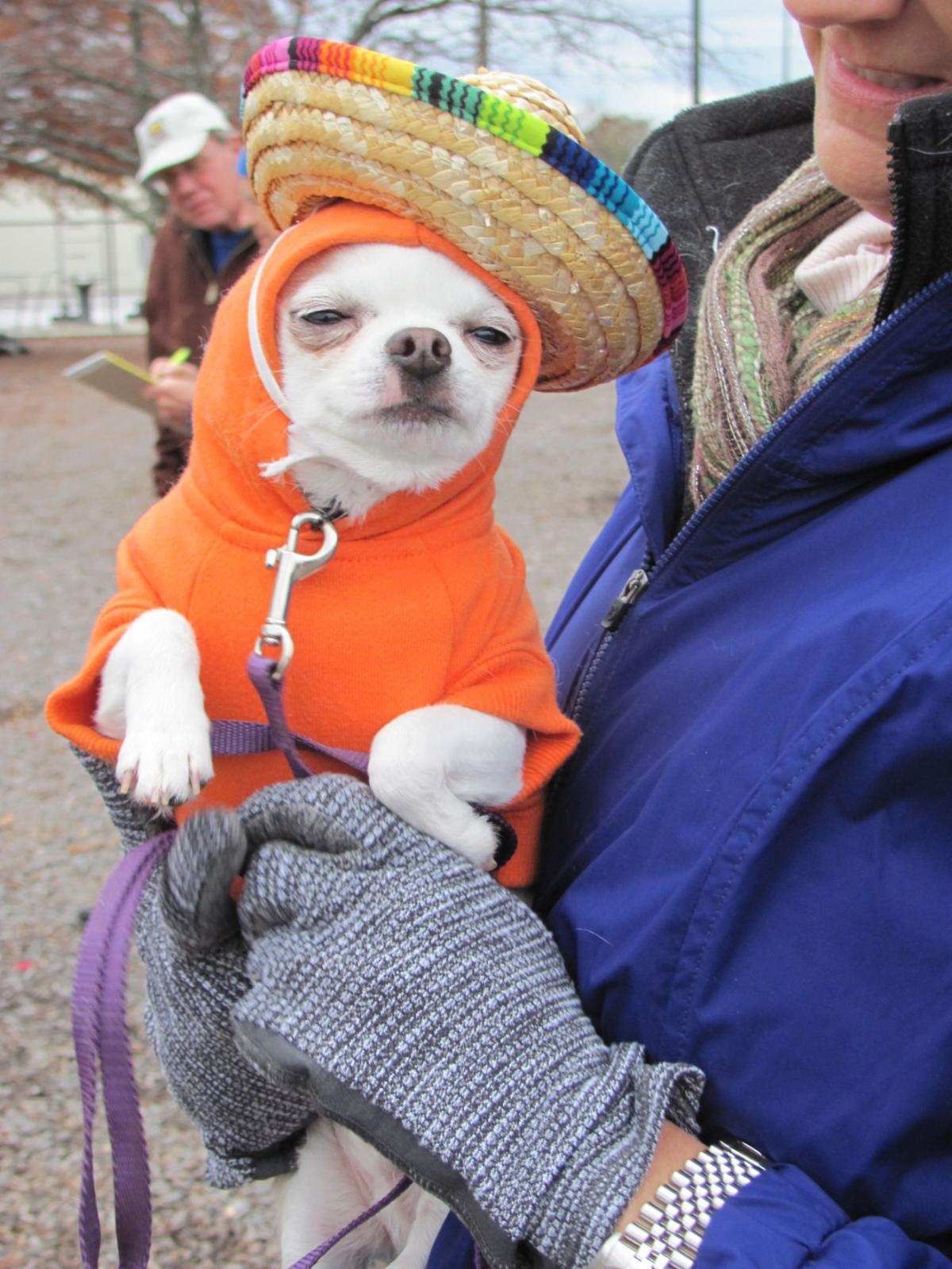 'Paco Bell,' a 4-year-old chihuahua, is pictured sporting his sombrero while being held by owner Becky Furry of Charleston during the Charleston Area Dog Club's annual Barktoberfest on Saturday.

CHARLESTON -- Trick-or-treating children were not the only ones who were out and about in costume on Saturday for Halloween.

Approximately 20 costumed canines and their owners paraded around the grounds of the Charleston Area Dog Club facility on 17th Street during the club's annual Barktoberfest event. The costumes included Spider-Man, Uncle Sam, a Chicago Bear, a bumblebee, a red devil, and more.

Kristen Pierce of Mattoon decked out her 5-year-old border collie mix, Jasmine, with fairy wings and her 2 1/2-year-old Labrador mix, Kiah, with a pink tutu for the occasion.

Pierce said this was her first Barktoberfest, but she has enrolled Kiah in an obedience class through the dog club before. Pierce said she adopted Kia as a rescue dog and found her to be a fearful dog at first, so she sought out the club's assistance.

"The class has helped her quite a bit. It has helped her a lot to come out of her shell," Pierce said. Kia and Jasmine were calm and well behaved as they mingled with the other dogs at Barktoberfest.

Janice Derr of Charleston dressed her 7-year-old chihuahua-dachshund mix, Cinnamon Rose, as a witch and her 6-year-old dachshund, Lucy, as a pumpkin. She said these two little dogs are veterans of last year's Barktoberfest and her 10-year-old pug, Sid, is a alumnus of the club's dog training.

"I just always enjoy coming to events hosted by the dog activity club. We came out last year and had a good time," Derr said. "I know several of the people here. It's good to see them again and their dogs."

Becky Furry of Charleston suited up her 4-year-old chihuahua, Paco Bell, in an orange hooded sweatshirt and a little sombrero to represent his Mexican heritage. She added that chihuahuas get chilled easily, so Paco Bell has grown accustomed to wearing sweaters and costumes to stay warm.

Furry, who is a member of the dog club, said she enjoys the annual Halloween costume event because they get to meet lots of people and their dogs who are new to the club's activities.

"It's a good way to get the community involved and let them know what we are about," Furry said.

Club member Ellen Johnson said they hold classes in the spring, summer and fall at the club's 17th Street facility, which is the former Putt n Swing site. This site has a variety of dog agility obstacles. She said the club holds winter classes in the One Stop Copy Shop building in Mattoon.

Johnson said the club is saving money and raising funds to build an indoor classroom building on the grounds of its 17th Street facility. She said this building also will be a place where local dog owners can take their canines in the event of a disaster, noting that Red Cross shelters do not allow pets.

More information about the Charleston Area Dog Club is available by contacting Johnson at 217-345-3576.

The year 2020 has become infamous for being a rough time period all around, but it was particularly trying for Capt. Ray Hall of the Mattoon Police Department.

Have you seen them? Mattoon authorities asking for help

The Mattoon Police Department has posted photos on its Facebook page of two subjects that it is seeking the public's help in identifying.

Mattoon officers made one arrest on a crack cocaine charge and another on a methamphetamine charge early Tuesday evening.

Witness accounts indicated the man shoved the woman into a bathroom, slammed her head into a wall, grabbed her by the hair and threw her to the ground.

The Mattoon Community Dog Park is set to be constructed this year with the help of donations from the community, including the Mattoon Moose Lodge.

Christopher & Banks, which has Mattoon store, declares bankruptcy, may go out of business

Christopher & Banks is the latest retailer to file for bankruptcy, and it may be going out of business.

U.S. Rep. Mary Miller, R-Mattoon, has said she will oppose any articles set forth to impeach President Trump.

Illinois Facebook users who filed a claim can expect to receive their checks within a few months, pending final approval and barring any appeals.

Firefighters responded to a false alarm caused by a student triggering a pull box alarm Tuesday morning at Riddle Elementary School in Mattoon.

Watch now: Contractors board up windows at Illinois Statehouse

Watch now: Contractors board up windows at Illinois Statehouse

Participants are pictured forming up at the starting line for the Dachshund Dash during the Charleston Area Dog Club's annual Barktoberfest on Saturday.

'Paco Bell,' a 4-year-old chihuahua, is pictured sporting his sombrero while being held by owner Becky Furry of Charleston during the Charleston Area Dog Club's annual Barktoberfest on Saturday.