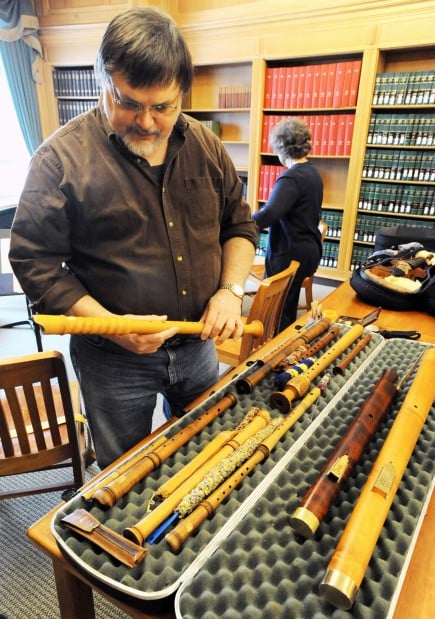 Collegium Musicum Consort member Charles Hughes talks about the history of the recorder before the ensemble's practice begins April 13, 2012 at Booth Library in Charleston. (Photo by Ken Trevarthan/Journal Gazette & Times-Courier). 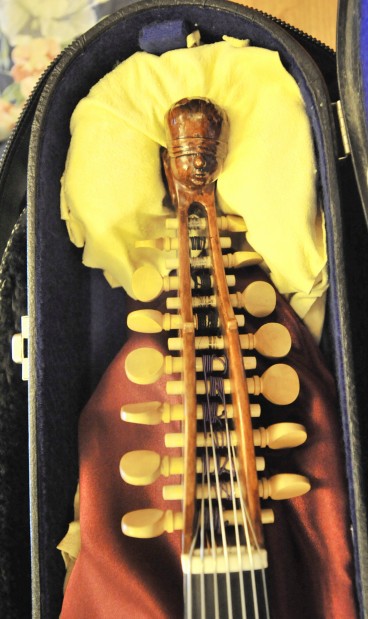 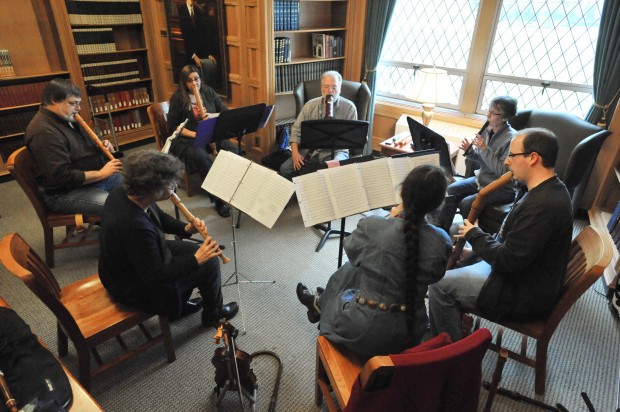 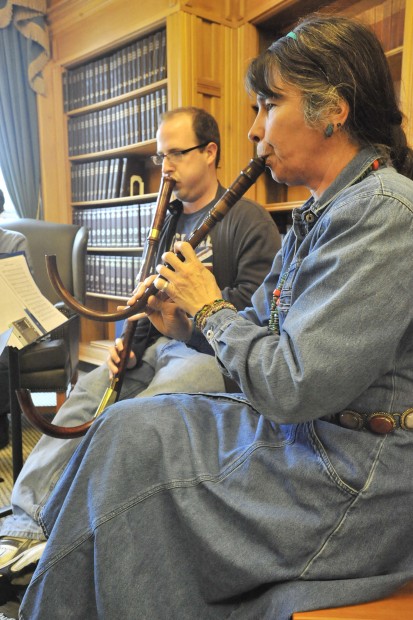 CHARLESTON — The desire to teach, learn and enjoy music brings a diverse group of college faculty, community members and students together on Friday afternoons at Eastern Illinois University’s Booth Library to perform music from a time long passed.

The seven musicians, known as the Collegium Musicum Consort, gather to learn about the instruments, musical literature, composers and performance practice of the Middle Ages and Renaissance.

“When you think about the odds ... what are the odds to have a group like this here?” said Elaine Fine, a core member of the group and music instructor at Lake Land College in Mattoon.

The group originated due to a campus-wide call for performers for the “Elizabeth I, Ruler and Legend” exhibit at Booth Library in March 2004, said Peter Hesterman, a founding member of the group who was a music professor at EIU for 32 years.

Hesterman and Peter Lowen, now a musicologist at Rice University, formed a small, period instrument ensemble, and were joined by Terry Coulton and Fine.

The group’s second performance was in the fall of 2004, when they provided the music for “Everyman” at the Tarble Arts Center. Hesterman, Lowen and Fine were joined by Rosemary Buck, an English professor at EIU, and Richard Rossi.

“We continued with student members and others joined along the way,” Hesterman said.

Today, the group consists of Hesterman; Fine; Buck; Ruth Riegel, an office manager in the chemistry department at EIU; Charlie Hughes, a painter at the University of Illinois, and his wife Jeri Matteson-Hughes, who will be retiring this year from computer technology at EIU; and EIU student Adam Hall.

But while playing together as the Consort, they play period instruments, or modern replicas, of Medieval and Renaissance instruments, Hesterman said.

They hold public performances at churches, the Recital Hall at Doudna Fine Arts Center, Booth Library and at various conferences. However, performing publicly is not the purpose of the group, Fine said.

“The focus is not so much on giving concerts, but playing together,” she said.

The groups uses an online archive of sheet music called the International Music Score Library Project to select music to rehearse and perform. Booth Library also has a collection they select from, Fine said.

Fine, who began playing the recorder at age 5 and spent time as a baroque flutist, describes their sound as old music — “music from the days of kings and queens,” she said.

During the Medieval period, instruments were often passed around the dinner table, similar to how the group shares instruments during their rehearsals, Buck added.

Their audience may also pick up a hint of jazz at times, Hughes said of the Renaissance “dance music.”

“The sacred and secular compositions were originally written for voices, and dance music was written for unspecified instruments,” Hesterman said.

Because of this, the group often improvises, particularly with the Medieval music, Hughes said.

Buck points out that while there is a creative aspect to the music they play, it is based on historical facts.

“It’s not just improvising in any old way,” Buck said. “It’s based on something.”

“We try to work cooperatively so everyone contributes. It’s nice to be able to draw on the different strengths everyone has,” Fine added.

At performances, the group uses mainly recorders, but during their rehearsals, a variety of instruments are played.

Not only is the sheet music challenging, but the range of the instruments is limited and most can only play one level of loudness. The number of keys is also limited, Hesterman said.

To make up for that, the instruments come in all sizes, Fine said.

The Hugheses, the collectors of the group, are well aware of that fact as their collection of mainly Renaissance instruments continues to grow.

At a recent rehearsal, the Hughes brought numerous recorders, dulcians, crumhorns in a variety of families and sizes, along with a Medieval fiddle to share with the group.

“We have three centuries of instruments playing a totally different century of music,” Hughes said.

Hughes’ Medieval fiddle, while a reproduction itself, may not be reproduced in the quite the same way much longer.

Hughes explained that the fiddle was made with gut strings, a natural fiber made from the intestines of animals.

With the spread of mad cow disease across Europe, it has become more difficult to buy gut strings, Hughes said.

“If you’re a purist, purist, you still really try to get gut,” he said.

Authorities said that a examination of the child revealed further injuries, including the loss of teeth.

No serious injuries were reported in a Charleston house fire on Tuesday afternoon, authorities said.

The health department has released new data on COVID cases and deaths.

Torin Kursell was driving southbound Tuesday evening on Illinois Route 130 north of Charleston when he glimpsed an eerie sight in the sky.

Sheriff's officials said Halyna Hutchins, director of photography for the movie "Rust," and director Joel Souza were shot. The Santa Fe New Mexican reported Baldwin was seen Thursday outside the sheriff's office in tears, but attempts to get comment from him were unsuccessful.

Collegium Musicum Consort member Charles Hughes talks about the history of the recorder before the ensemble's practice begins April 13, 2012 at Booth Library in Charleston. (Photo by Ken Trevarthan/Journal Gazette & Times-Courier).