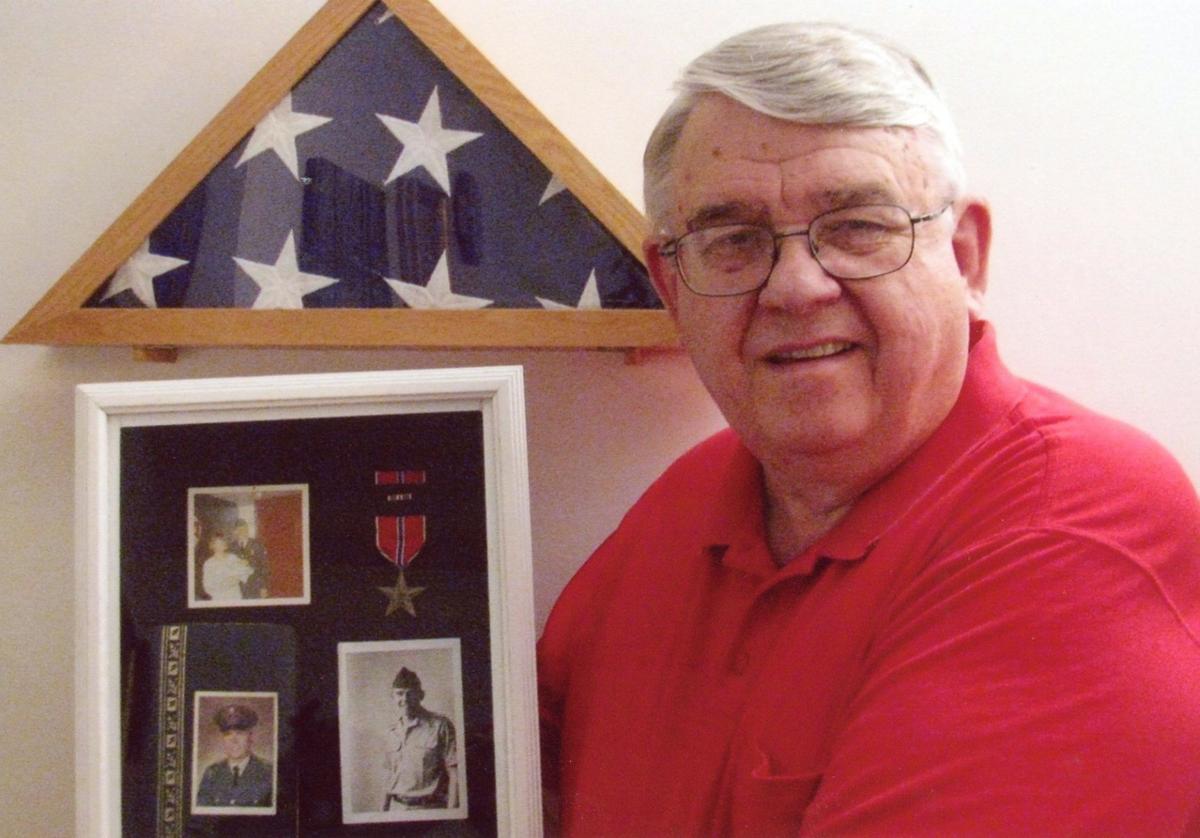 Vietnam veteran Thomas 'Mike' Rice is shown with some of his memorabilia from his time in the service. 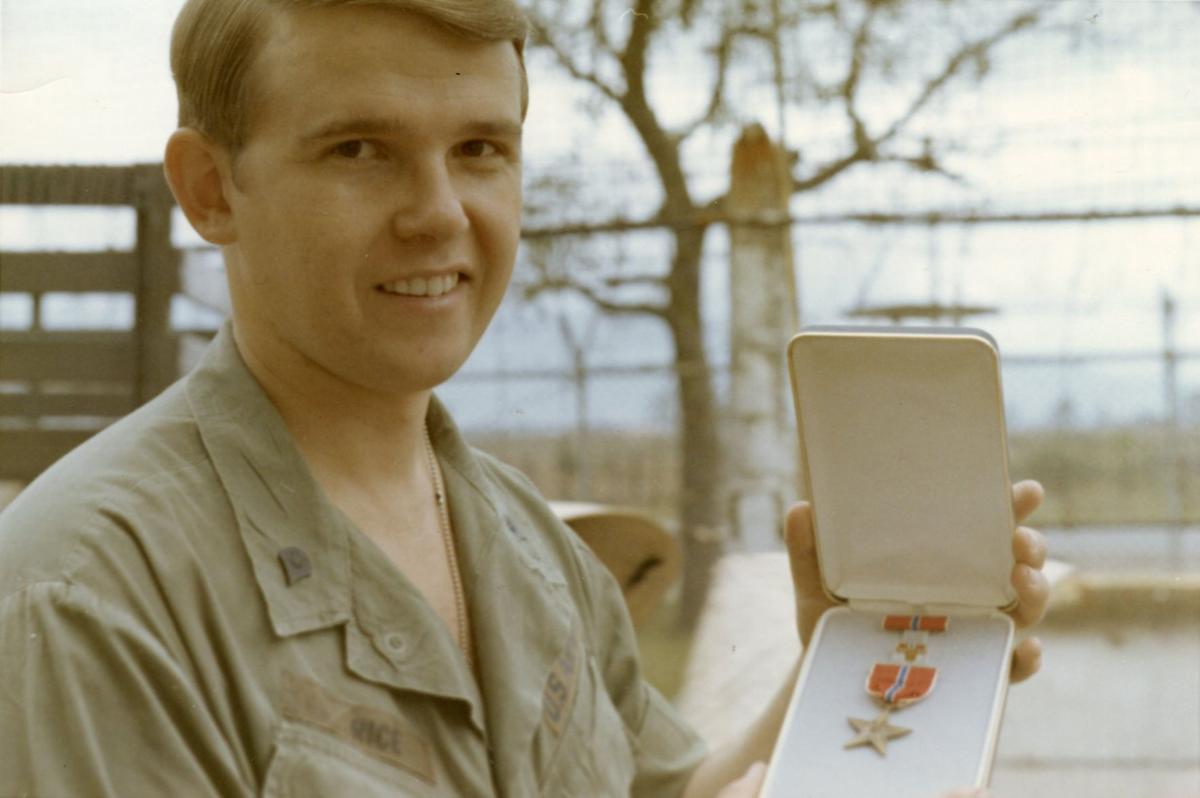 MATTOON -- Thomas "Mike" Rice, a 1965 graduate of Charleston High School and a 1969 graduate of the Grand Rapids School of the Bible and Music, was drafted by lottery into the Army on May 14, 1970.

Rice came from a family of servicemen. He is one of six members of his immediate family to have served his country. His father, Vernon, was a Navy veteran and he, along with three of his brothers -- Jim, John, and Jerry -- all served in the Army during the same time period. Their little brother, Joe, who was seven years younger than Mike, served in the Army in later years.

The lottery draft was determined by birthdate, and the first 185 men were taken accordingly, Rice said. He said his number was 118, Jim's 135 and Jerry's was 37.

Once Mike was assigned to Vietnam, that exempted his brothers from being sent there. Jim and John served in Germany, and Jerry was sent to England.

Rice said he was working as a hoist operator at RR Donnelley's in Mattoon when he was drafted, and he was hoping with his Bible education to be a chaplain's assistant.

God had other plans for him. He shared the following Bible verse in relating his point.

"5 Trust in the LORD with all your heart

and lean not on your own understanding;

6 in all your ways submit to him,

and he will make your paths straight."

Entering as an MP officer would have meant he would take eight weeks of advanced training in Fort Gordon, Ga., but by selecting the other option of language school, he could go home for 16 days and then report to school.

"I was so homesick, and I missed Carol so much," he said. They married in 1967. He said he asked the captain if he could take Carol with him to school. The answer from the captain was "yes," which made his choice an easy one.

When the captain initially told him he qualified for language school, his immediate thoughts were, "This guy didn't know Mrs. Peterka. I was a terrible French student." Rice said in high school he had a morning route delivering the Chicago paper, beginning his day at 6 a.m. and playing three sports: football, basketball and baseball. He said he just wasn't a good student but was a good test taker.

The experience of studying for 30 weeks in Texas, he said, showed him that there is no way one can learn a language completely in that amount of time. While attending the school, he said he was given a month off and couldn't believe how much he forgot in that time.

Rice and his wife were in Texas from August of 1970 through March of 1971 for the schooling. Their son Andrew was born on April 7, 1971, and was 17 days old when Rice initially left for Vietnam on April 24. The soldier returned home the week of Andrew's first birthday. He said Carol would send him pictures and he watched his firstborn grow up through them.

Upon arriving in Da Nang, Quang Nam Province, the young soldier was thankful for the Vietnamese interpreters who spoke English, which helped him with the transition. Da Nang was the headquarters for ICOR, a corps of the Army in South Vietnam from 1955 to 1975.

As part of the 29th Civil Affairs Company, Rice was assigned as a Military Assistance Command, Vietnam (MACV 15) at the compound of Duy Xuyen. His role was to help the Vietnamese.

At this point of the war, America was standing down and sending fewer troops over. He said he was one of 17 soldiers there. Their role was to help the Vietnamese. Some of the projects he recalled were building a school, sharing a new way of growing and harvesting rice, and helping them with medical conditions.

He said the materials for the school such as cement and sand were provided by the US Dept. of Defense and the locals had to organize and run the school.

Other memories include that of children needing medicines and care for awful sores. Dissemination of the products had to be closely monitored to ensure the kids were getting the products and taking them as prescribed. He said they could not dole out a week's worth of medicines to the child's family because more than likely the products would be sold.

The people were desperately poor and any opportunity to make a few dollars was a top priority for them, Rice said.

When they introduced a new rice and a way of growing it, he said, the locals weren't very excited. They didn't like the taste of it, and it was different than how they had grown rice for 1,000 years.

Another recollection he shared was on his first day of arrival at ICOR he noticed a big metal kettle of apples. This was something he continually noticed in oncoming days. He said an order was placed with the Department of Defense for 2,300 apples and they received 23,000. He said it wasn't long before he and his buddies were told to disperse of the fruit before it went bad.

"I never shot at nobody, and nobody ever shot at me," he said. His closest brush with death, he shared, was a near-death truck accident with a little boy on a water buffalo.

His group had been assigned to tear down the American ICOR Marine headquarters at Freedom Hill that was being shut down. The facility sat just outside of Da Nang.

He said they had to tear down the facilities and give the lumber to the locals. Many trips were taken on Highway 1 from Hanoi to Saigon loading up the lumber and transferring it back to unload. On one of those trips, he was a passenger in the two-and-a-half ton truck they were hauling the lumber in and a little boy on a water buffalo came out of the trees and brush quickly.

The one thing that got him through his days in Vietnam was "my wife's faithful letter writing." He said some days he would get two or three letters a day from her and some days he might get zero or one.

He said she sent him 305 letters in the time he was there, and he knows this because they counted them. She sent him a letter every day except for the days he was gone on leave and the last six days he was there. He told her not to write because he would be gone before the letters arrived.

Mike and Carol have two children, Andrew and Ben. Andrew served as a Cobra helicopter pilot with the Marines and had one tour in Iraq. He served from 1994-2013 and is currently a Marine reserve officer. Ben is an actuary with State Farm and resides in Bloomington with his family.

Vietnam veteran Thomas 'Mike' Rice is shown with some of his memorabilia from his time in the service.