MATTOON – A car chase by police that began in Moultrie County ended Friday evening with the pursued vehicle crashing into a parked car and residential garage along DeWitt Avenue in Mattoon before overturning.

Chief Jason Taylor of the Mattoon Police Department said the two motorists in the overturned car, Jamie Mullins and Dayton Ramsey, were taken to the hospital for treatment of what are believed to be injuries that are not life threatening.

He said no other injuries were reported at the crash scene on the south side of DeWitt, just east of North 21st Street.

"Nobody else was in the vicinity. Everyone was OK," Taylor said at the scene.

According to a news release from the Sullivan Police Department, an officer attempted to initiate a traffic stop on the southbound vehicle along Hamilton Street (Illinois Route 32) at 7:25 p.m. A registration check came back with information that the registered owner had a suspended driver’s license and the officer determined the driver matched the description of the registered owner, the release said.

Once the officer activated his emergency lights, the release stated the suspect vehicle accelerated. “Heavy traffic conditions and the safety of the general public” led the officer to terminated the pursuit near the Sullivan Fox Harbor Bridge, the release said. The officer observed the suspect vehicle turning eastbound onto Moultrie County 800N (Bruce Findlay Road) heading toward Coles County, before losing sight of it. Adjacent counties were advised of the vehicle possibly heading toward their counties.

A Mattoon police officer driving westbound on DeWitt/Illinois Route 121 subsequently spotted the eastbound suspect car at 7:33 p.m. at the 31st Street intersection and turned around to begin a pursuit, Taylor said.

"The vehicle picked up speed and started passing cars in the turning lane," Taylor said.

The Mattoon officer then terminated the pursuit due to safety concerns but continued eastbound on DeWitt, Taylor said. The officer soon saw the crash scene near the southeast corner of DeWitt and 21 Street, he said.

Preliminary investigation of the crash determined that the suspect vehicle struck a parked car in front of a garage and pushed this car into the garage before overturning, Taylor said. Police officers found that Mullins was the driver of the vehicle and had to cut her out of her seat belt to free her from the overturned car.

Taylor said police officers subsequently determined that Mullins has a suspended driver's license and that Ramsey has a revoked license, as well as a warrant for his arrest for a traffic issue in Chicago. Taylor didn't have towns of residence for the two motorists.

A resident who lives close to where the rollover took place was in his home when he heard a noise.

"I don't even know how to describe it," the resident, Nic Garcia, said of the noise.

He said he came out to a smoking car to make sure everything was all right. Garcia said the residents who own the garage are lucky they were not in there. He added they are often in the garage.

View a video and more photos from the scene of the crash at jg-tc.com

LISTEN TO THE CHURCH THREAT CALL: Police seek help in identifying caller who made threat against Mattoon church

MATTOON -- An injured driver was pulled out her burning sport utility vehicle Wednesday night after the vehicle struck an electrical utility pole. 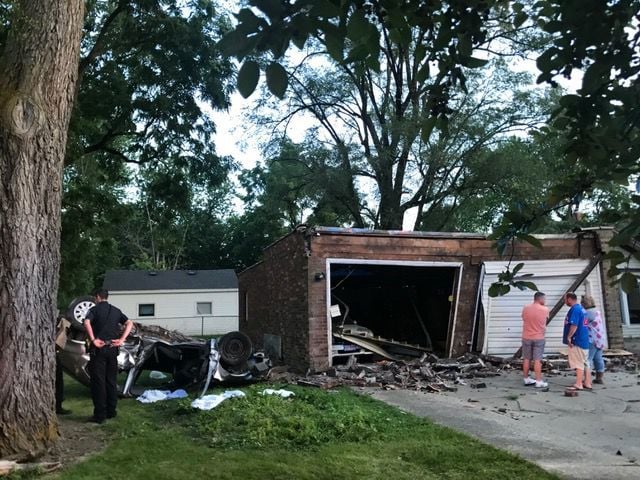 A car rests on its top Friday in the yard at 620 N. 21st St. in Mattoon. The car was involved in a police chase that originated in Moultrie County. 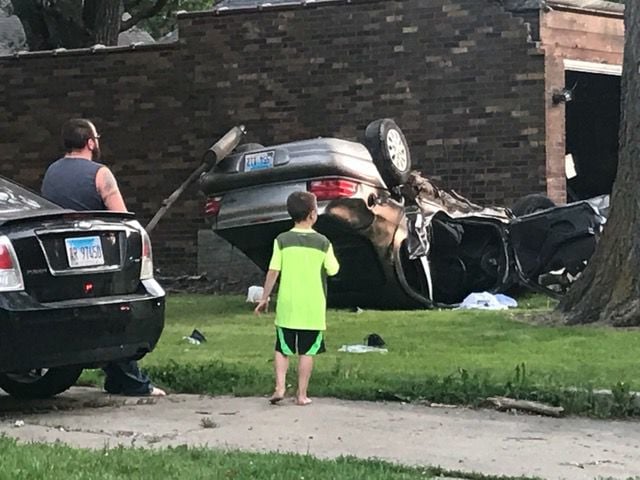