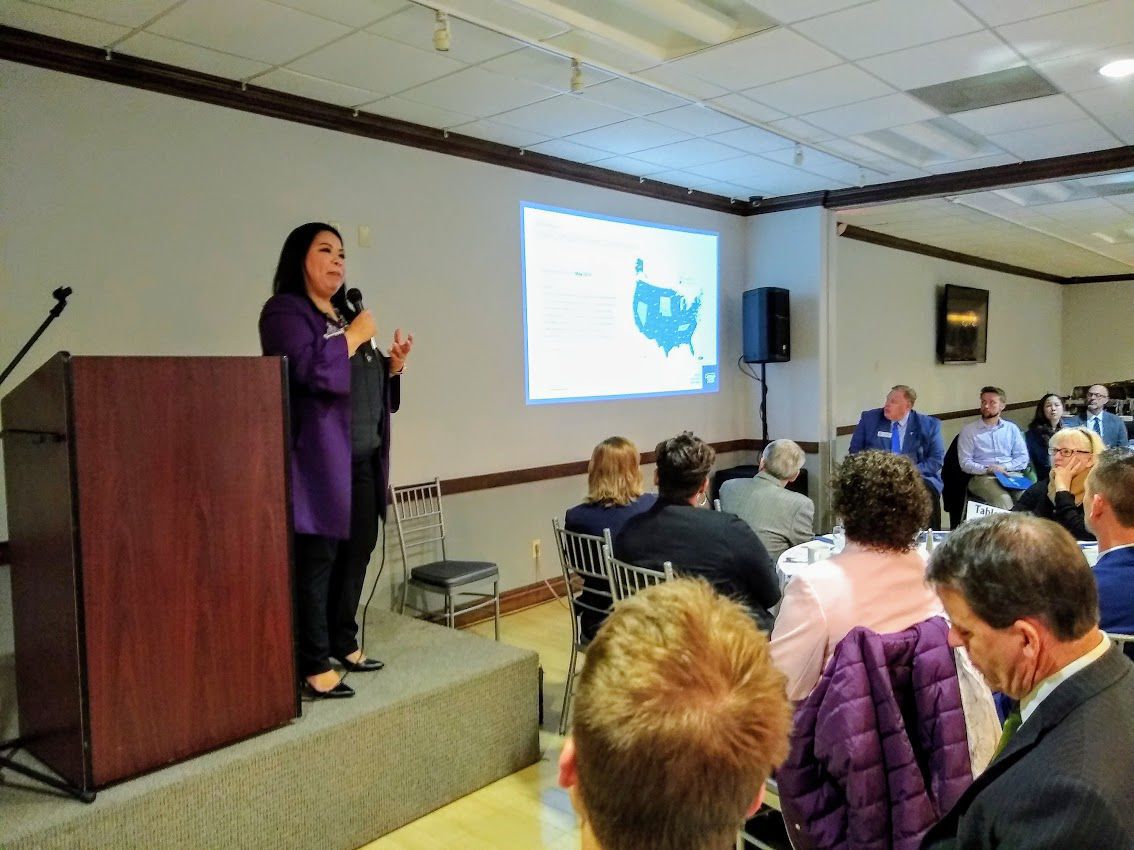 Theresa Le, who is the Chicago region partnership specialist for the U.S. Census Bureau, gives a presentation Thursday morning during the Community Update Breakfast at the Unique Suites Hotel in Charleston. 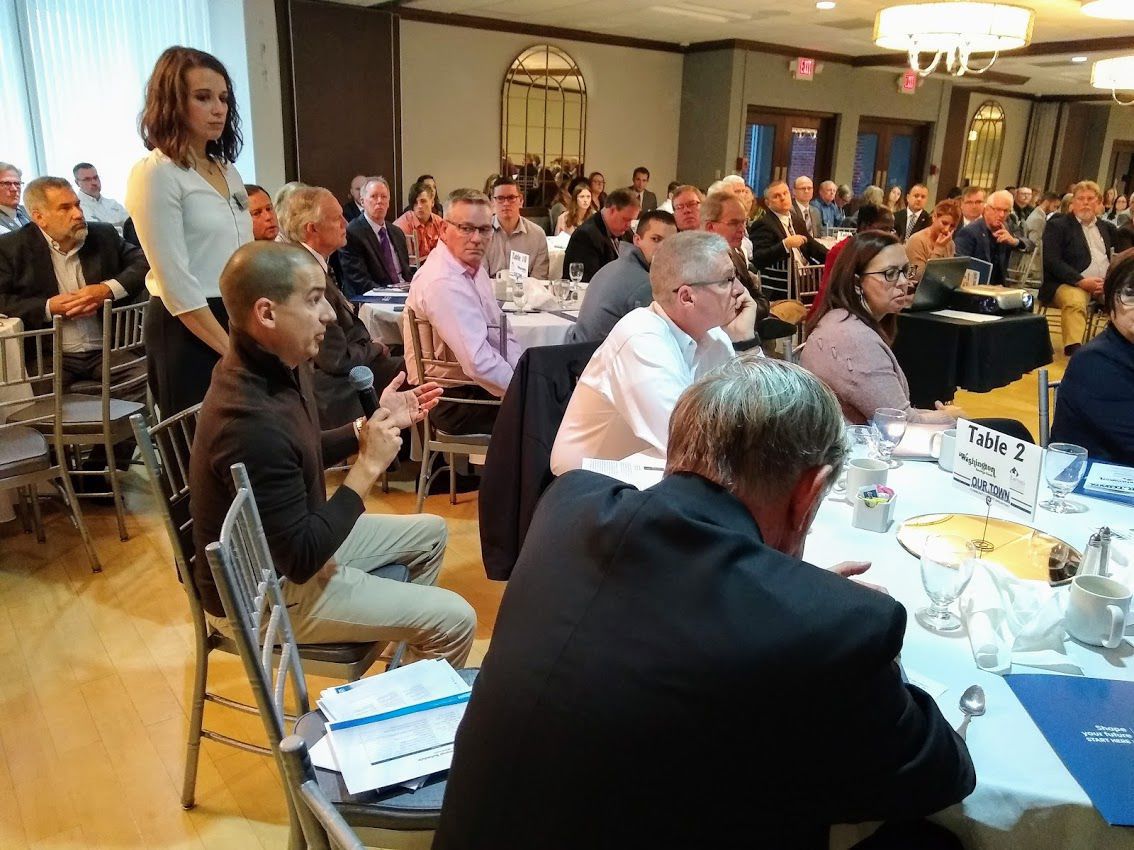 Charleston Assistant City Planner Alex Winkler, seated at left and holding a microphone, asks a question during the U.S. Census presentation at the Community Update Breakfast on Thursday at the Unique Suites Hotel in Charleston. Standing to his left is Charleston Area Chamber of Commerce President and CEO Jessica Killough, who helped facilitate the question and answer session.

CHARLESTON — A U.S. Census Bureau official asked for the community's help Thursday morning in getting a complete decennial count of Coles County residents in 2020, including Eastern Illinois University students.

A bureau Chicago region partnership specialist, Theresa Le, made this request at the annual Coles County Community Update Breakfast while noting that Census data helps determine how much shared tax revenue communities get for infrastructure, schools and social services.

"By filling out these (Census questionnaires), it impacts your quality of life 10 years out and beyond," Le said during her presentation at the Unique Suites Hotel in Charleston. The Charleston Area of Commerce and Mattoon Chamber of Commerce hosted this breakfast.

The guest speaker fielded a few questions regarding the count of students attending Eastern, including whether they would be recorded as living in Charleston or their hometowns.

Le said the questionnaire asks parents to not count children who are away at college as being part of their households because they will be counted by their schools. She said the Census counts students who live in "group quarters" on campus and those off campus.

"Where (students) live and reside, that is where the funding will go to for resources," Le said.

Illinois Republicans are pushing for new ethics rules in Springfield. Here's what they want.

GOP House members are proposing a series of reforms to address corruption. The plan: greater transparency and prevent future abuses of power.

Census workers have been verifying residential addresses this fall. The Census Bureau is scheduled to mail questionnaires to these addresses in March.

Recipients will be able to answer the questions by mail, online or over the phone from mid-March to July. Census workers will then follow up with households, including in person, that have not responded from April through July.

Charleston Assistant City Planner Alex Winkler said Charleston and Mattoon each receive approximately $160 per resident, per year in shared tax revenue from the state for infrastructure, police and fire service, and more.

Census Bureau Chicago region partnership specialist, Jeanine Beasley, responded that the students in "group quarters" on campus are scheduled to be counted in February and March.

Le said community leaders volunteering with Complete Count Committees, such as the one in Charleston, are encouraged to conduct public awareness campaigns about the importance of filling out Census questionnaires.

"We are going to rely on everyone in the community to help us with this effort," Pamperin said.

Le said applications are being accepted at 2020census.gov/jobs for Census takers at $14 per hour. She said these flexible hour positions are a good opportunity for students and other residents who want to work in the evenings or on weekends for extra income.

John Covington, president of the Mattoon Chamber board, said he encourages community members to respond to their Census questionnaires. He said not doing this will result in Census takers having to make more door to door visits.

"If someone knocks at the door and presents the proper identification, please be courteous and help them," Covington said.

A Toledo man was injured as the result of an all-terrain vehicle crash Sunday evening in rural Cumberland County.

A Mattoon family has teamed up with several partner organizations to present three nights of free drive-in movies at the Cross County Mall in Mattoon.

Protests by Black Lives Matter supporters and related groups reportedly occurred without incident on Sunday in Charleston and Mattoon, and another protest is set for 3 p.m. Monday, June 1 at Mattoon City Hall.

Effingham native preparing for America's Got Talent next round

An Effingham native with Mattoon family ties and his partner in music are preparing for the next round of "America's Got Talent" as part of their new Broken Roots duo.

The Coles County Health Department reported that it was notified on Saturday of two additional laboratory confirmed COVID-19 cases.

A man was sentenced to prison for being intoxicated when he was involved in a two-vehicle accident near Sarah Bush Lincoln Health Center just more than two years ago.

The Mattoon Community Food Center plans to hold its second distribution of USDA Farmers to Families Food Box program free produce, dairy and meat to community members regardless of income level or residency at 2:30 p.m. Thursday, June 4 at its facility, 600 Moultrie Ave.

A Coles County Peace March is scheduled to start at noon Friday at Peterson Park in Mattoon.

Theresa Le, who is the Chicago region partnership specialist for the U.S. Census Bureau, gives a presentation Thursday morning during the Community Update Breakfast at the Unique Suites Hotel in Charleston.

Charleston Assistant City Planner Alex Winkler, seated at left and holding a microphone, asks a question during the U.S. Census presentation at the Community Update Breakfast on Thursday at the Unique Suites Hotel in Charleston. Standing to his left is Charleston Area Chamber of Commerce President and CEO Jessica Killough, who helped facilitate the question and answer session.