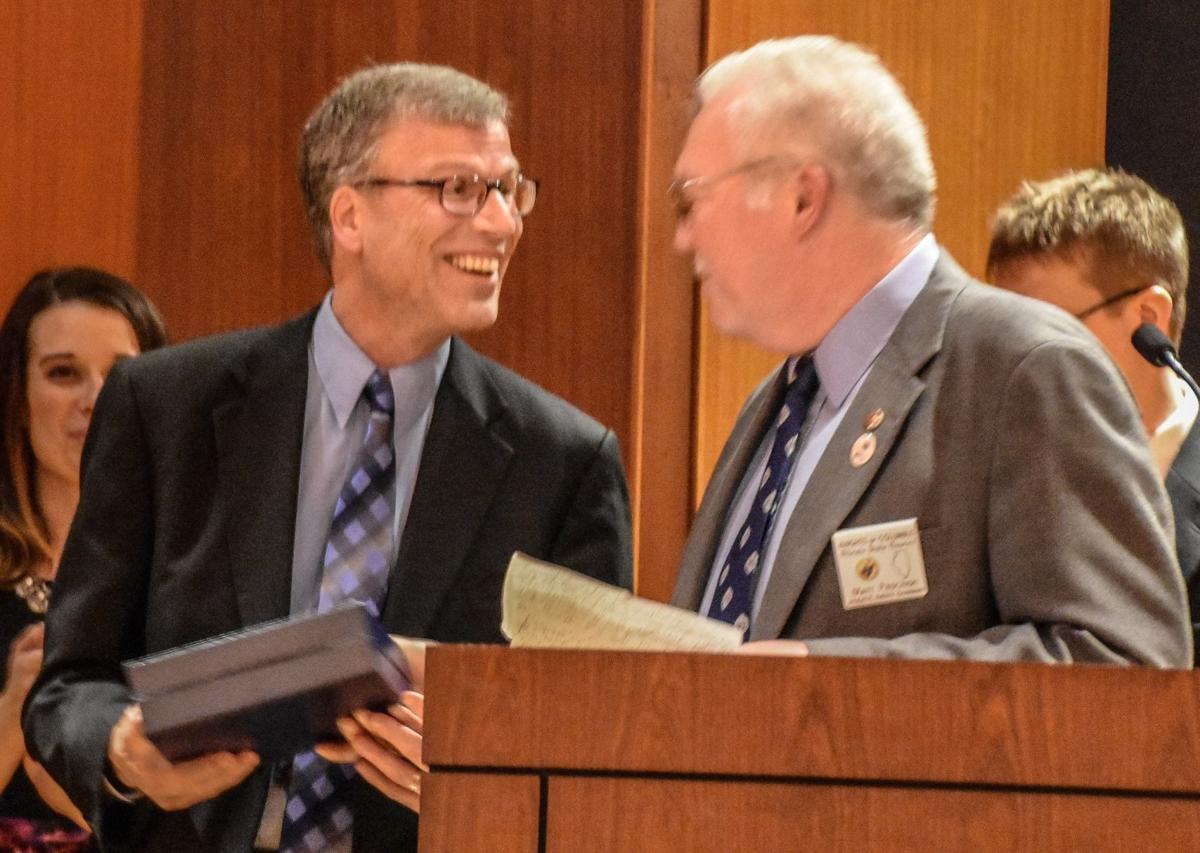 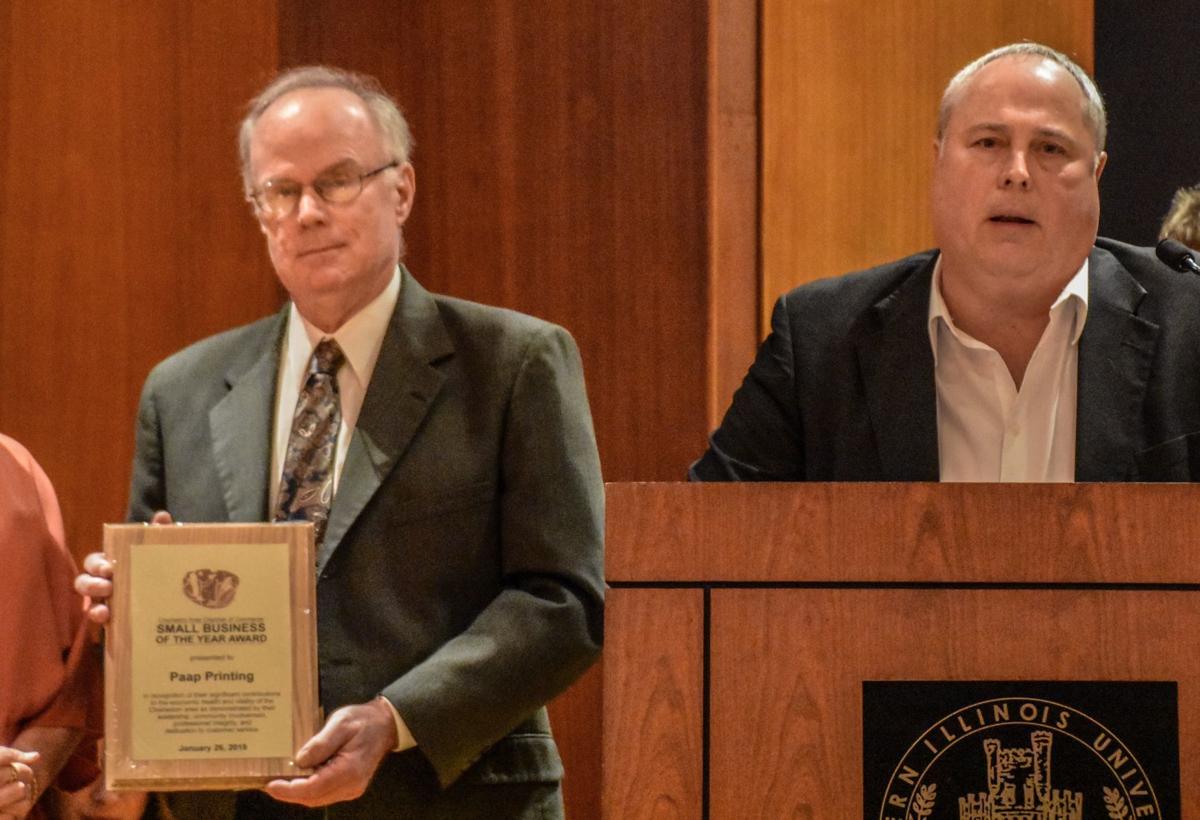 Terry Paap (at right) of Paap Printing speaks during the Charleston Area Chamber of Commerce's annual dinner Saturday. Gary Henigman (at left) presented the business with the chamber's Small Business of the Year Award. 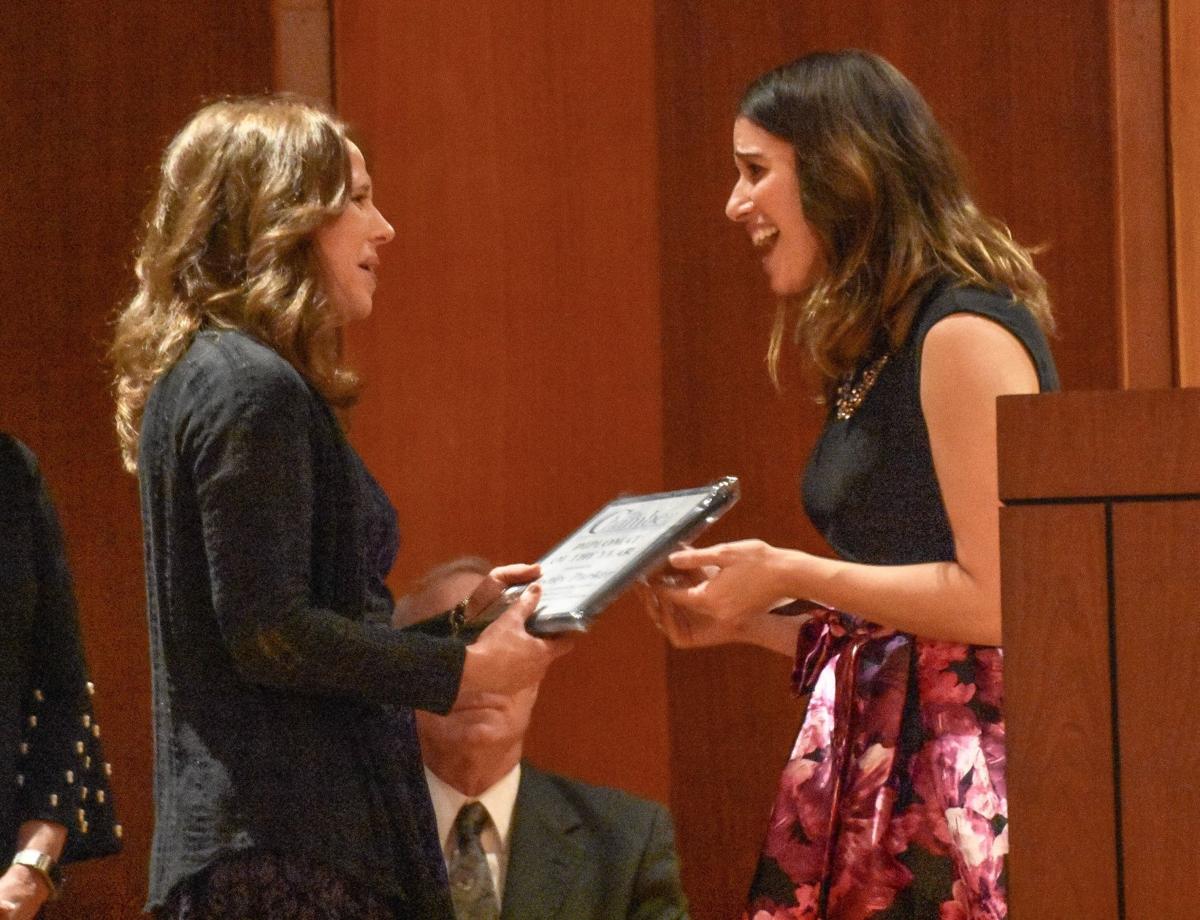 CHARLESTON -- After more than 30 years of work in Charleston, Roy Lanham thinks it's the only place for his endeavors.

That wasn't the original plan for the director and campus minister at the Newman Center in Charleston. But as the years went on, he found that it was a place where people care about their community, somewhere he could do his part.

"I could not imagine doing it anywhere else," Lanham said Saturday while accepting the Charleston Area Chamber of Commerce's Citizen of the Year Award.

"I didn't imagine I'd stay in Charleston but now I can't imagine being planted anywhere else," he said.

Award presenter Matt Piescinski told the audience at the chamber's annual dinner that Lanham came to Charleston to build the Newman Center.

Work over the next three decades included opening the Hedwig Houses women's shelters, mission trips to Haiti and counseling "countless" students and others, Piescinski said.

"He cares too much, he does too much and he loves too much," Piescinski said. "It gives us all comfort to know someone has his eyes open."

The awards presented during Saturday's dinner also included the chamber's Small Business of the Year Award, which went to Paap Printing.

In accepting the award, owner Terry Paap credited his family's work for making the business successful and ensuring it will continue.

"A business is only as good as its workers and I think I've got the best," he said.

Award presenter Gary Henigman said he's been a longtime customer of the printing business and has always been impressed by its "old school" approach.

"I'm proud to call this family friends because that is exactly how they treated me," he said.

Also, the chamber's Diplomat of the Year Award went to Chasity Parker, a vocational evaluator and program coordinator at CCAR Industries.

Chamber President Jessica Killough presented Parker with the award and said her "warmth and energy" exemplify what it recognizes.

The award goes to one of the chamber's "front line of volunteers" that make its events and activities possible, Killough said. She also thanked Parker for welcoming her to the president's position, which she began at the first of the year.

The chamber also recognized outgoing board of directors Chairwoman Tina Held and incoming Chairman Brett Bennett along with other directors changes.

Pfizer shot expands to US children as young as 12

Pfizer shot expands to US children as young as 12

As the new Charleston Area Chamber of Commerce President and CEO, I wanted to take time to introduce myself to the community. I am thrilled wi…

Rewind: A look at Charleston's numerous business shifts in 2018

CHAMBER COLUMN: 2018 was a year to remember for the Charleston Chamber

The Charleston Area Chamber of Commerce staff and board of directors would like to wish everyone a wonderful & safe holiday season! All of…

Terry Paap (at right) of Paap Printing speaks during the Charleston Area Chamber of Commerce's annual dinner Saturday. Gary Henigman (at left) presented the business with the chamber's Small Business of the Year Award.