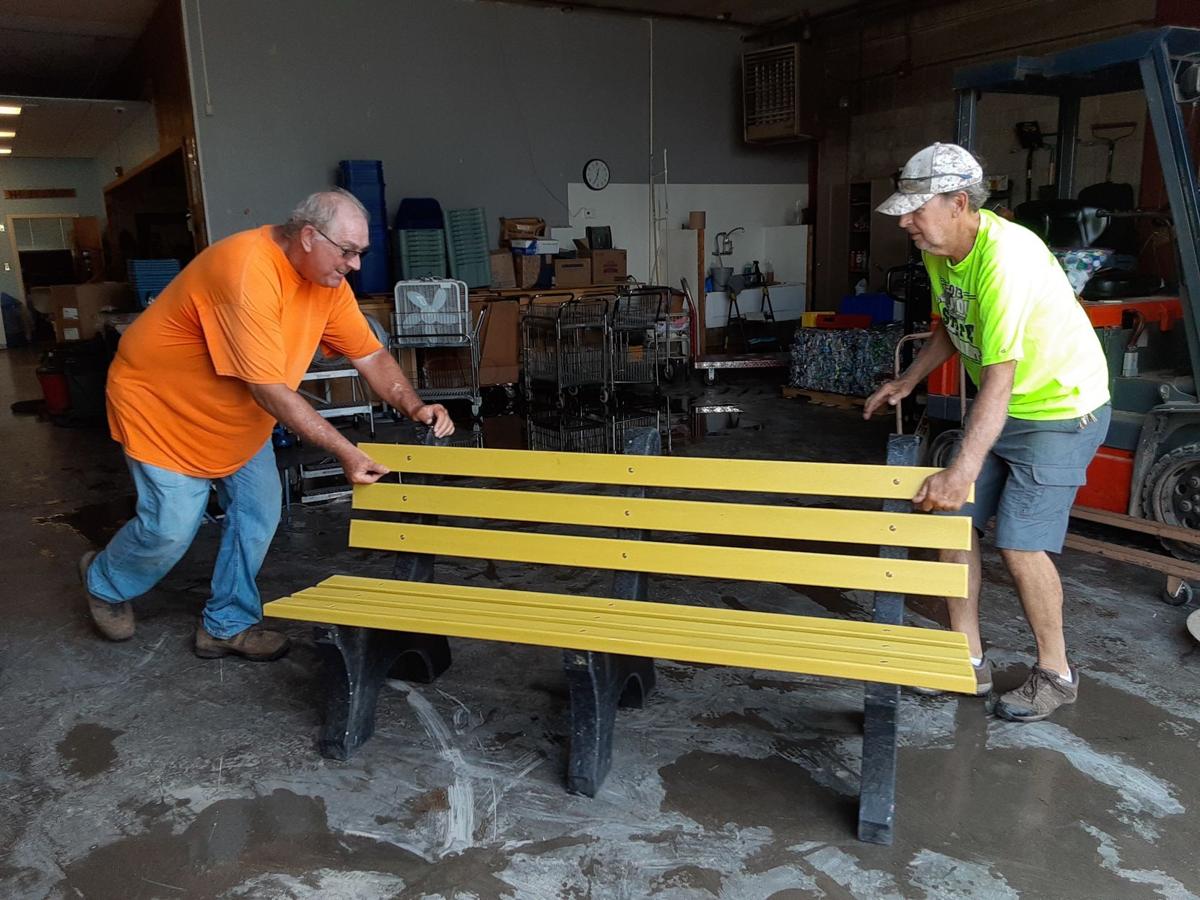 Mattoon Parks Department worker Rob Newlin and Superintendent of Parks Kurt Stretch are shown on July 22 picking up one of the three LIFE Academy benches that the city purchases for Peterson Park. 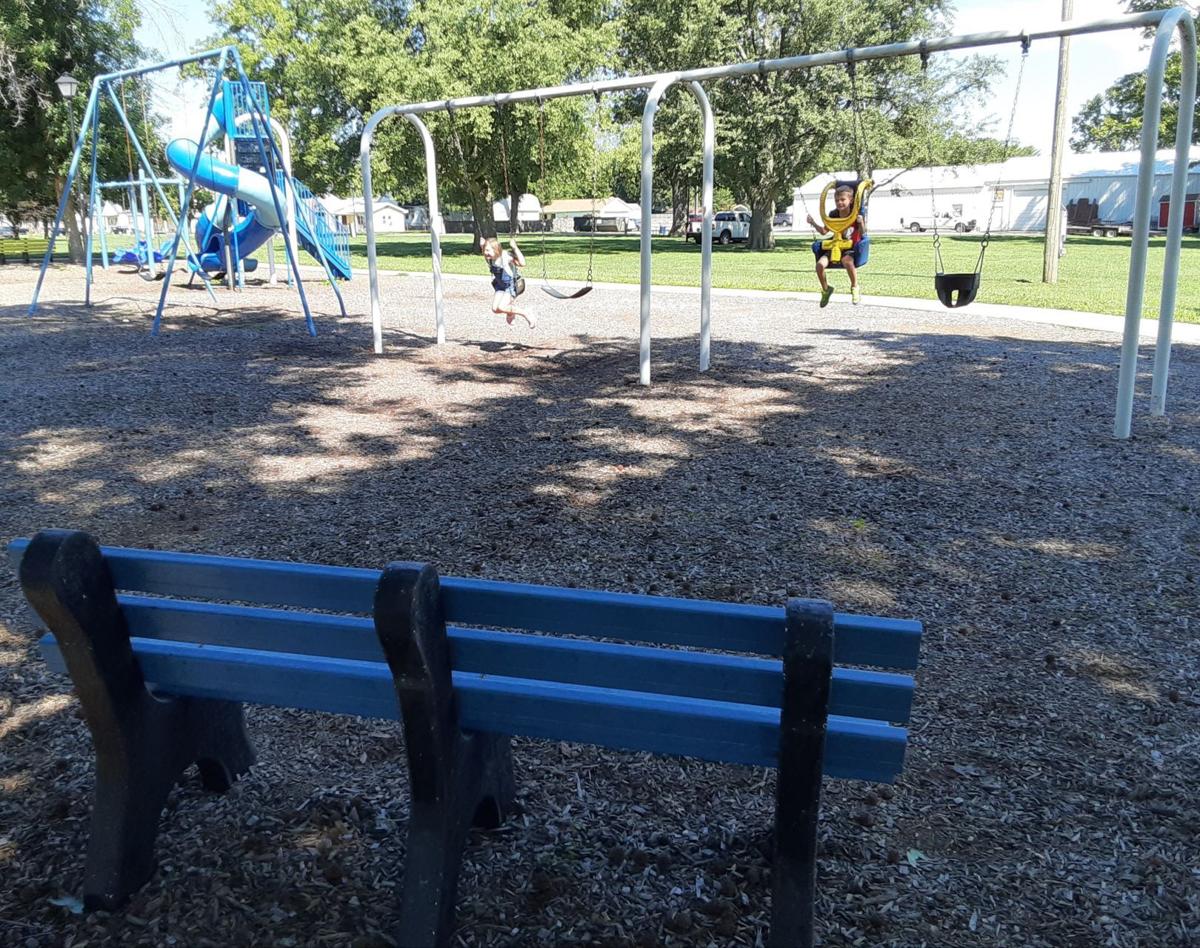 Addison, 8, and Gavin, 5, Baumgarten of Charleston swing Wednesday morning at Mattoon's Peterson Park, where one of the new LIFE Academy benches is in the foreground. 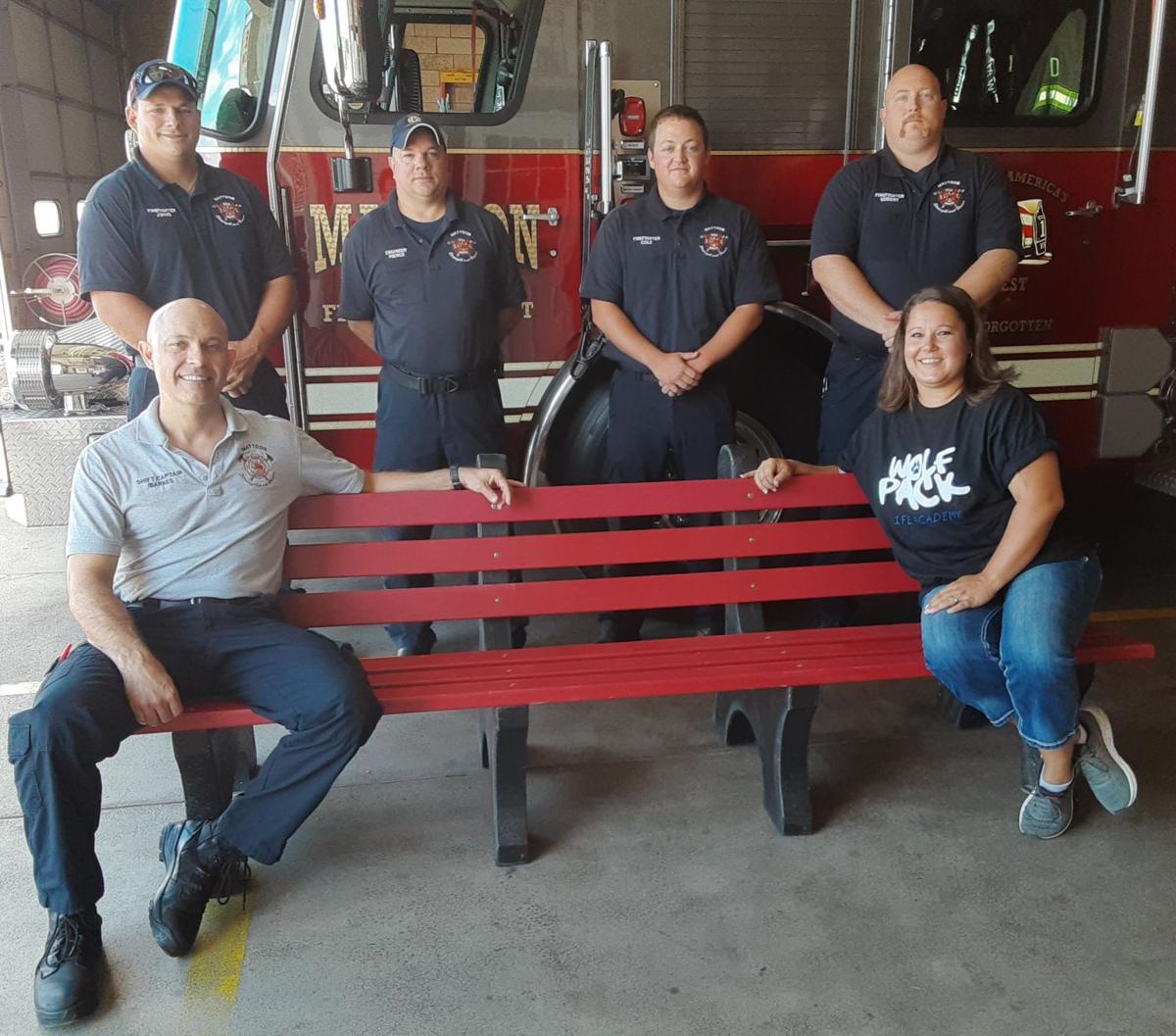 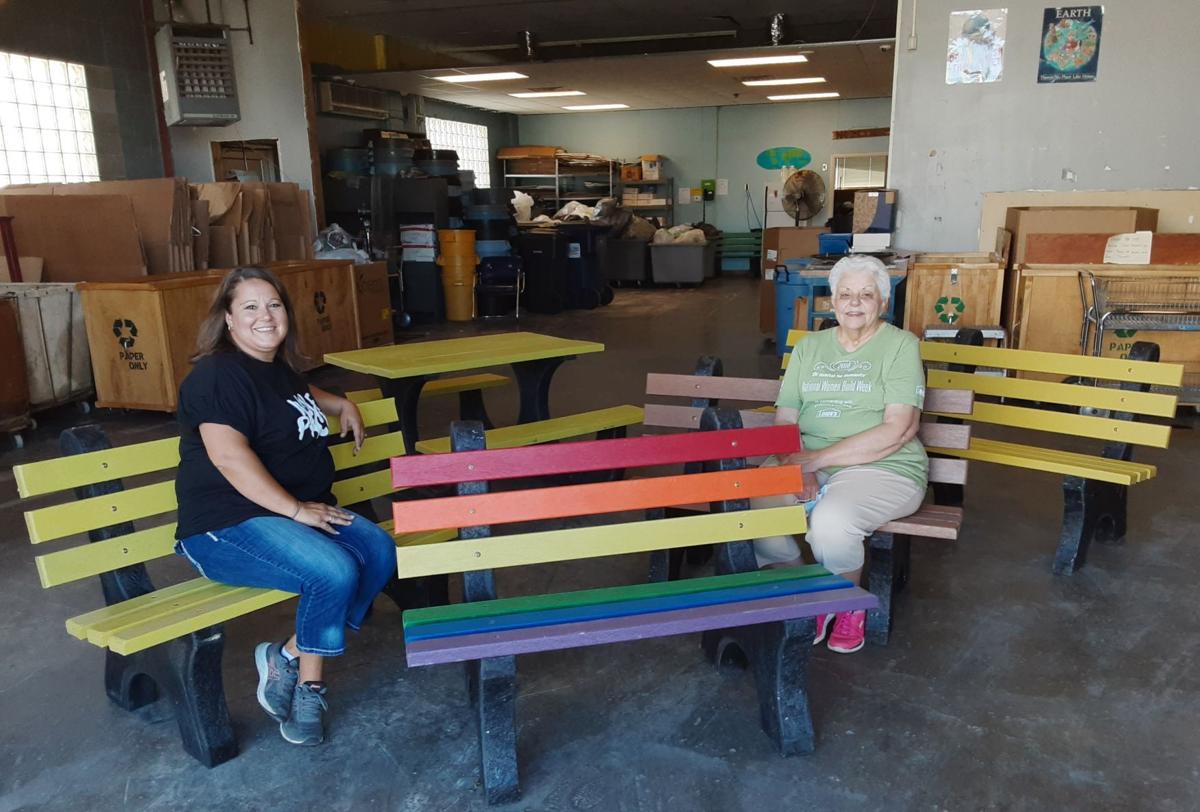 MATTOON — Adult students in Eastern Illinois Area of Special Education's LIFE Academy Recycling Program work throughout much of the year to keep plastics and other recyclables out of the landfill.

Several community members and organizations lent their support to this effort during the 2019-2020 school year by ordering outdoor furniture made out of recycled plastic bottle caps and lids. The resulting 12 benches and four picnic tables arrived last week at the program's recycling facility, 1615 Lake Land Blvd., and have been distributed to Peterson Park, Mattoon fire stations, and elsewhere.

Recycling Coordinator Heather Hughes said the LIFE Academy has been sending bottle caps and lids in recent years to Green Tree Plastics of Evansville, Indiana, which converts this material into plastic lumber and then builds items with it. She said they decided last year to take orders from the public for the first time for benches and tables.

"It raises awareness of the recycling program that we are here," Hughes said, adding that sales help sustain the program.

Hughes said the creation of the benches and tables, which have functional lifespans of at least 50 years, prevented approximately 3,900 pounds of plastic from going to the landfill. She noted that each 4-foot bench weighs 125 pounds and each 8-foot table weights 550 pounds.

The LIFE Academy students also sort and package No. 1 and No. 2 plastic bottles; corrugated cardboard; and office, newsprint and other paper. Hughes said the students learn to follow instructions, to partner with co-workers and to develop other job skills at the recycling facility. She said they also get to know community members while collecting recyclables from more than 50 factories, offices and other workplaces.

"The kids are pretty proud of the work that they do here," Hughes said, adding that they are hard workers. The recycling facility is located directly north of the former Mattoon Area Adult Education Center building that now houses the LIFE Academy adult program, and the facility has a drop-off bin for recyclables.

Ida Cockrum, retired principal of the Mattoon school district's Neil Armstrong Center, is among those who purchased benches. In fall 2018, the Armstrong Center and the EIASE Diagnostic & Development Center merged to form LIFE Academy. She said the students are continuing to do phenomenal work recycling materials and helping the environment through the LIFE Academy.

"They have really done a very good job of taking over the recycling program and expanding on it," Cockrum said.

Hughes said Cockrum bought two benches and the LIFE Academy gifted one to the retired principal in honor of her continued volunteer service with this program. She said Cockrum inputs codes off of Coca-Cola Co. bottle caps so that the LIFE Academy can receive rebates and inputs codes off Prairie Farms milk jug caps to get rebates for Coles County Habitat for Humanity.

Engineer/Paramedic Tyler Johns said Mattoon firefighters purchased two 8-foot benches for the City Hall and Marshall Avenue fire stations. Tyler said the LIFE Academy does good work and provides benches that are made of long lasting materials, adding that he encourages other community members to support this program by ordering benches and tables.

The City of Mattoon purchased three benches and placed them around the playground at Peterson Park. Superintendent of Parks Kurt Stretch said the city may eventually obtain additional benches for placement at other city parks and along the Lincoln Prairie Grass Trail.

For more information or to order a bench or picnic table, visit recycle.eiase.com.

Police are investigating a 911 call that triggered a response by multiple police officers recently in rural Neoga but turned out to be not accurate.

Coles County Health Department has reported that a total of 33 additional laboratory confirmed COVID-19 cases were identified locally over the weekend.

Funding measures for road construction projects are set for votes by the Charleston City Council during its meeting Tuesday.

Mattoon Parks Department worker Rob Newlin and Superintendent of Parks Kurt Stretch are shown on July 22 picking up one of the three LIFE Academy benches that the city purchases for Peterson Park.

Addison, 8, and Gavin, 5, Baumgarten of Charleston swing Wednesday morning at Mattoon's Peterson Park, where one of the new LIFE Academy benches is in the foreground.