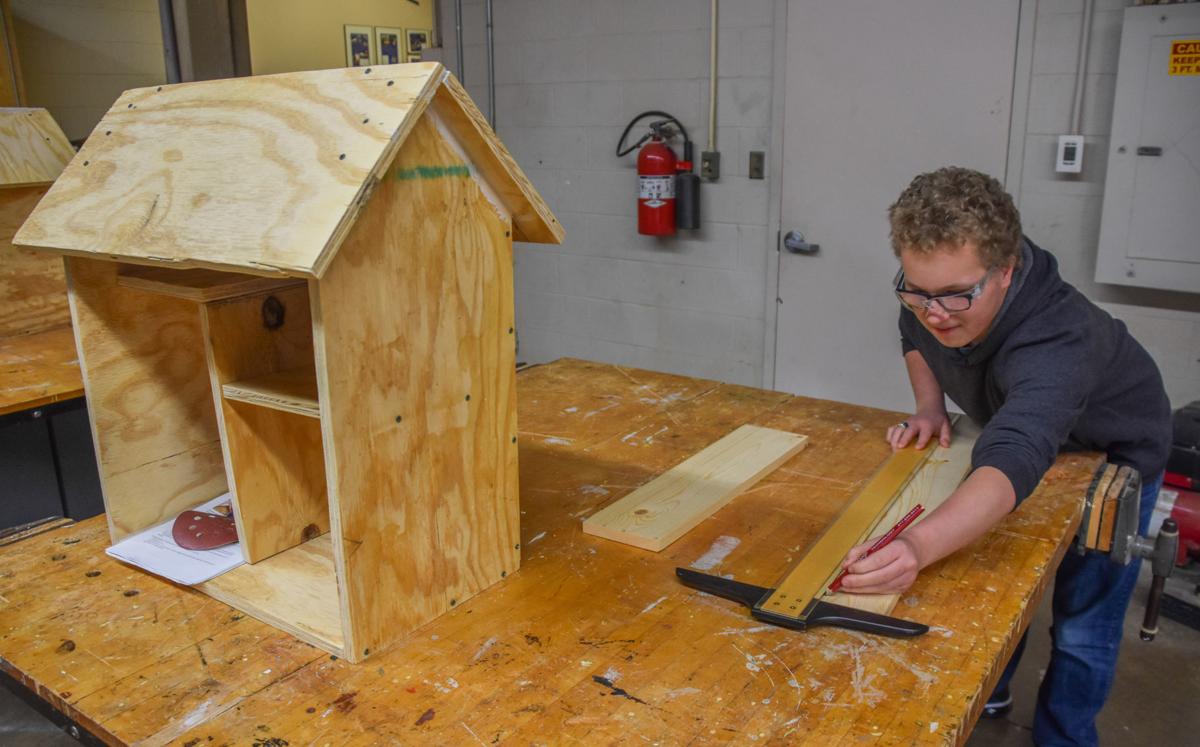 Charleston High School student Bryant Parker works on building a Little Free Library in the shop of the high school's agriculture class building. An effort at CHS will lead to six of the libraries being placed in various area locations later this year. 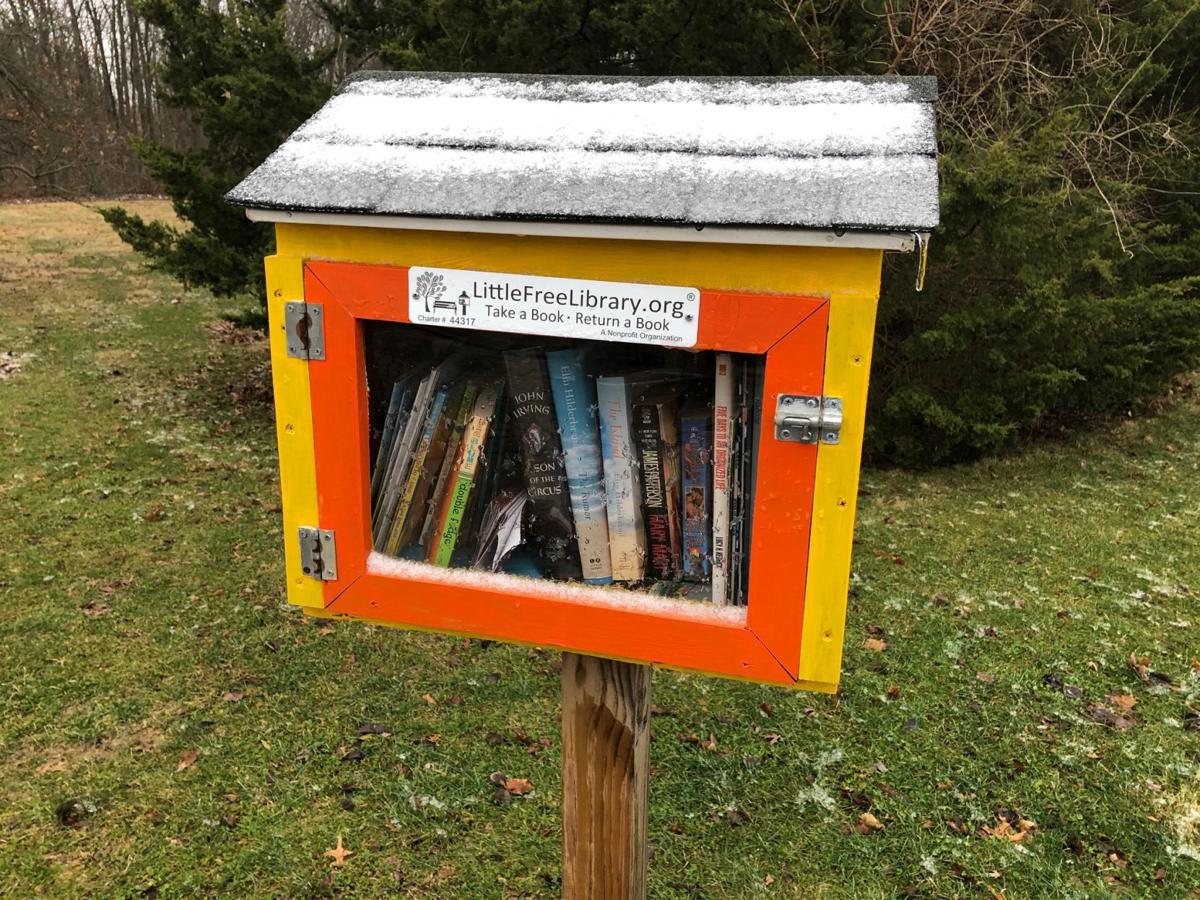 A Little Free Library is shown in Charleston's Lafferty Nature Center, similar to the ones that will be added to the community through a project at Charleston High School.

CHARLESTON — After a book drive brought in more than 2,000 books at Charleston High School, Heather Landrus had an idea about how to make them available for people to read.

Landrus, the high school's media specialist, said she's a fan of Little Free Libraries, boxes filled with books, put on posts and placed in public locations. People can borrow, return and replace books at their leisure.

Some students are helping with the effort that should lead to six new Little Free Libraries being placed in and around Charleston by this spring.

"It gives people of all ages access to free books," Landrus said of the libraries. "I wanted to create something that could tap back into different school groups."

To make the project a reality, agriculture class students are using the woodworking shop in their classroom to construct the libraries. Landrus said agriculture teacher Ben Oakley and his students "absolutely loved the idea" when she approached them about it.

Charleston school board approves $1.3 million in projects; Superintendent: 'We haven't forgotten' about Nov. discussion on issuing bonds for larger projects

And the student group Interact, a community service club sponsored by the Rotary organization, is raising money and will help look after the libraries after they're installed.

Student Delaney Horn, an Interact member who's also in the agriculture class building the libraries, said the project is something the class and the club can do to help the community.

"It will especially help kids," she said, adding that she hopes the project will benefit people who don't have, or have difficulty getting, public library cards.

Agriculture class student Bryant Parker said he appreciates the chance to learn about woodworking in a way that will help the community.

Students from Interact gave a presentation to the Charleston Rotary Club that led to a $600 donation from the Rotary to the project.

The group's members also will regularly check the libraries once they're in place to make sure they have enough books, club sponsor Kori Brimner said.

Brimner said the project is the club's first collaborative effort with another group at the school and, during her two years as its sponsor, Interact has never conducted "such a community effort before."

There are already three Little Free Libraries in Charleston: at Lafferty Nature Center, in Heritage Woods and near the courthouse square.

The locations for the six from the high school project haven't been finalized. Landrus said there are plans to put one in Ashmore and one in Lerna, which are in the Charleston school district.

Money also has been raised through a GoFundMe crowdfunding account and donations can still be made through the site at gf.me/v/c/9xqt/chs-free-little-library-project.

Landrus said enough money has been raised to build the libraries but additional donations will pay for plaques from the Little Free Library national organization and for more books if needed.

She also said she's not concerned about people taking books from the libraries without replacing them or donating another book in exchange.

She has sometimes placed a book in a Little Free Library after taking it from one in a different location, she said. The Charleston Carnegie Public Library also plans to donate more books to the project.

Landrus said the high school book drive took place just before winter break. The freshman class won the contest to collect the most books and will be rewarded with a pizza party, she said.

Awards including Citizen of the Year and Small Business of the Year will be presented Saturday during the Charleston Area Chamber of Commerce's annual dinner.

Getting to know our local raptors: Mattoon's Douglas-Hart offers close-up look at birds of prey

Douglas-Hart Nature Center in Mattoon recently hosted a birds of prey show as the first of its monthly series "Creature Features."

Austin Fehrenbacher took solace, even if he didn't spell it right, from a second chance during Tuesday's Charleston Middle School spelling bee. The eighth-grader ended up winning the competition by correctly spelling "Columbia".

Informational forums and other public activities will take place in Coles County to provide residents with information about the U.S. Census and the importance of completing it.

CHARLESTON — Renovations to the front lobby of the Charleston Police Department are scheduled to begin Thursday.

Charleston High School student Bryant Parker works on building a Little Free Library in the shop of the high school's agriculture class building. An effort at CHS will lead to six of the libraries being placed in various area locations later this year.

A Little Free Library is shown in Charleston's Lafferty Nature Center, similar to the ones that will be added to the community through a project at Charleston High School.