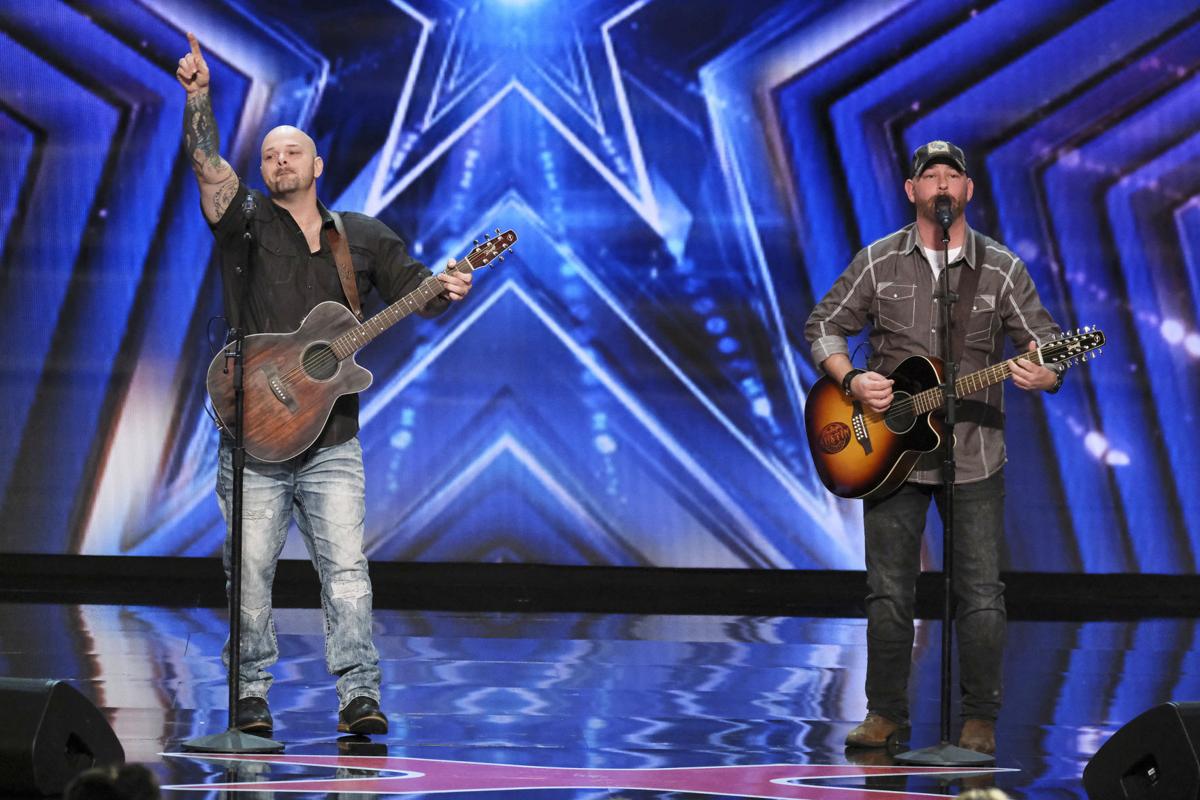 Pictured, from the left, are Joey Kar and Effingham native Austin Edwards performing as the Broken Roots duo on the May 26 broadcast of "America's Got Talent" on NBC. 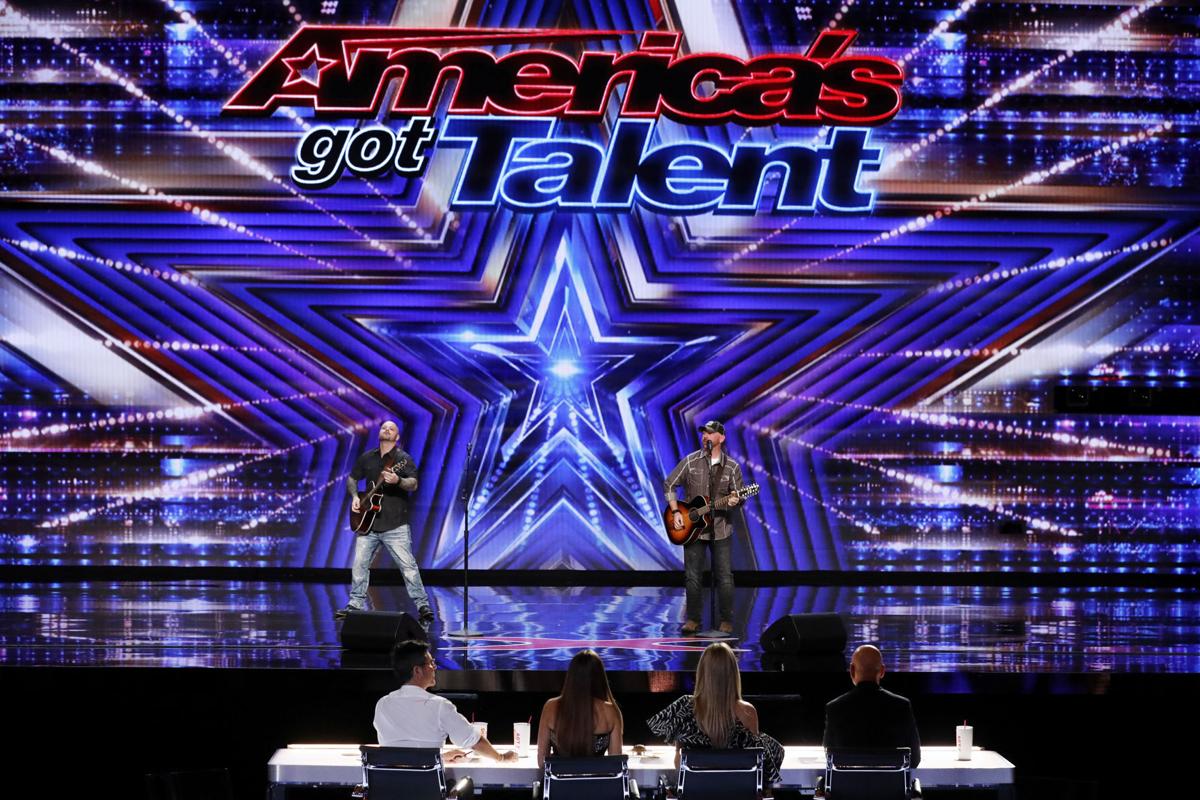 Pictured, from the left, are Joey Kar and Effingham native Austin Edwards performing as the Broken Roots duo on the May 26 broadcast of "America's Got Talent" on NBC. Talent show judges — Simon Cowell, Sofia Vergara Heidi Klum, and Howie Mandel are in the foreground.

MATTOON — An Effingham native with Mattoon family ties and his partner in music are preparing for the next round of "America's Got Talent" as part of their new Broken Roots duo.

"As for right now, we are moving forward to the next round," Edwards said, adding that they are not sure yet when that round will take place.

While growing up in Effingham, Edwards said he developed a passion for music after receiving his first guitar at age 7 and lessons from his father. Edwards said he is from a musical family, noting that his brother and sister-in-law, Adam and Tammy Weinstock of Mattoon, both play guitar. Edwards said he played professional gigs as a musician before starting his law enforcement career and he has renewed this pursuit in recent years.

"It certainly helps when you get into law enforcement, you have to choose your outlet," Edwards said, explaining that police officers have to hold their feelings in as part of their work.

Edwards said he and Kar, who also has a professional background in law enforcement, separately performed in the same circuit of Chicago area venues for several months before they met, found that they have a lot in common, and became friends.

Soon, the two performers decided to form a duo despite their differing backgrounds in country and rock. Edwards said they have needed to re-adjust their solo performance styles and re-arrange their respective set lists.

"For us to join together, we literally had to break all our musical roots," Edwards of the inspiration for the duo's name. Edwards said they have found that they enjoy bringing different musical genres together. Joey Kar added that, "We are trying to incorporate a lot of different ingredients in our pizza. We want to do everything."

Edwards said they eventually got the opportunity to perform on "America's Got Talent," where they debuted their Broken Roots act for their first ever concert.

"What a better place to do what we are doing than the biggest stage in the world," Edwards said.

The Effingham native said they were fortunate enough to perform in front of a live audience prior to the precautionary crowd limitations enacted by cities and states nationwide due to the COVID-19 pandemic. America's Got Talent has since began additional safety measures for the show.

During their appearance on America's Got Talent, Edwards and Kar discussed their law enforcement backgrounds and how Kar stepped down recently to open a music school for youths. The two also talked about their families, including Kar losing his wife to cancer and recently finding a new love, and about the different musical paths that have brought their duo together.

"I feel so bad for what you have had to go through, but the friendship and everything you are doing is to me what I feel this show is all about," Simon Cowell told them.

Kar said he was thankful for the opportunity appear on America's Got Talent and to connect with such a large audience. Kar said he wants to spread happiness and positivity through their music, and he appreciates all the positive feedback they have received so far from listeners.

"We are thankful for all the support. Without them, there is no us," Kar said of Broken Roots.

More information about Broken Roots is available at https://www.facebook.com/austin2music and https://austinedwardsmusic.com/. Edwards said he encourages people to check out other talented upcoming acts on America's Got Talent, which airs at 7 p.m. on Tuesdays.

A Mattoon family has teamed up with several partner organizations to present three nights of free drive-in movies at the Cross County Mall in Mattoon.

The following is a list of closure updates for various local art and entertainment venues in the area.

A Coles County Peace March is scheduled to start at noon Friday at Peterson Park in Mattoon.

Exchange student in Charleston preparing to return to Brazil

Brazilian exchange student Walter Monteiro Ribeiro, Jr. is preparing to return home after a year in which he built close friendships while playing on the Charleston High School soccer team and saw everyday life disrupted by the COVID-19 pandemic.

The second annual Coles County Truck Convoy benefit for Make-a-Wish of Illinois that had been scheduled for June 27 at the Coles County Fairgrounds has been postponed to Aug. 8.

The 2020 Summer Read program at the Mattoon Public Library will have new look with activities that incorporate social distancing when it starts on Monday.

The Mattoon ​school district is investigating comments by a paraprofessional on social media.

Pictured, from the left, are Joey Kar and Effingham native Austin Edwards performing as the Broken Roots duo on the May 26 broadcast of "America's Got Talent" on NBC.

Pictured, from the left, are Joey Kar and Effingham native Austin Edwards performing as the Broken Roots duo on the May 26 broadcast of "America's Got Talent" on NBC. Talent show judges — Simon Cowell, Sofia Vergara Heidi Klum, and Howie Mandel are in the foreground.