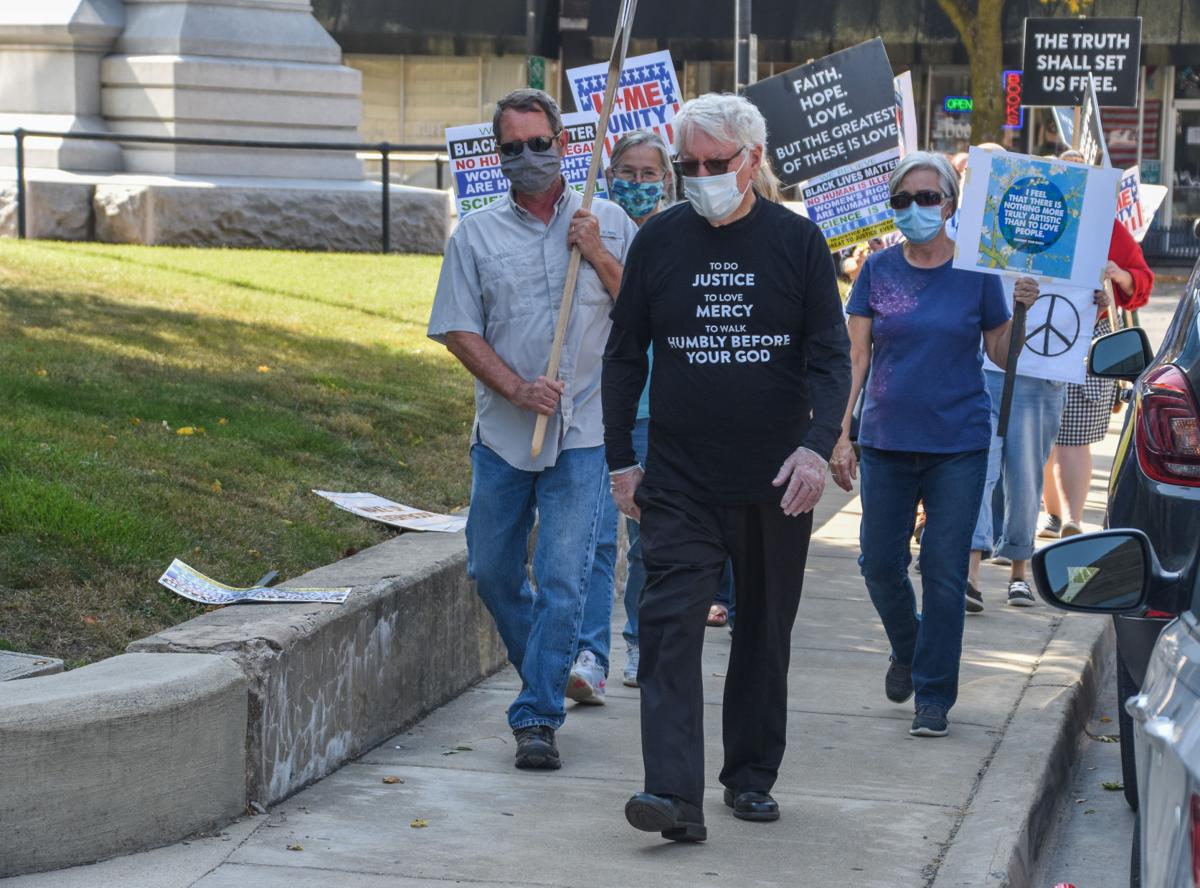 Former area Congressman Glenn Poshard leads a group of about 20 marchers around the Coles County Courthouse in Charleston on Tuesday afternoon. Poshard is visiting courthouses in each of the counties he represented in Congress to deliver messages of nonviolence. 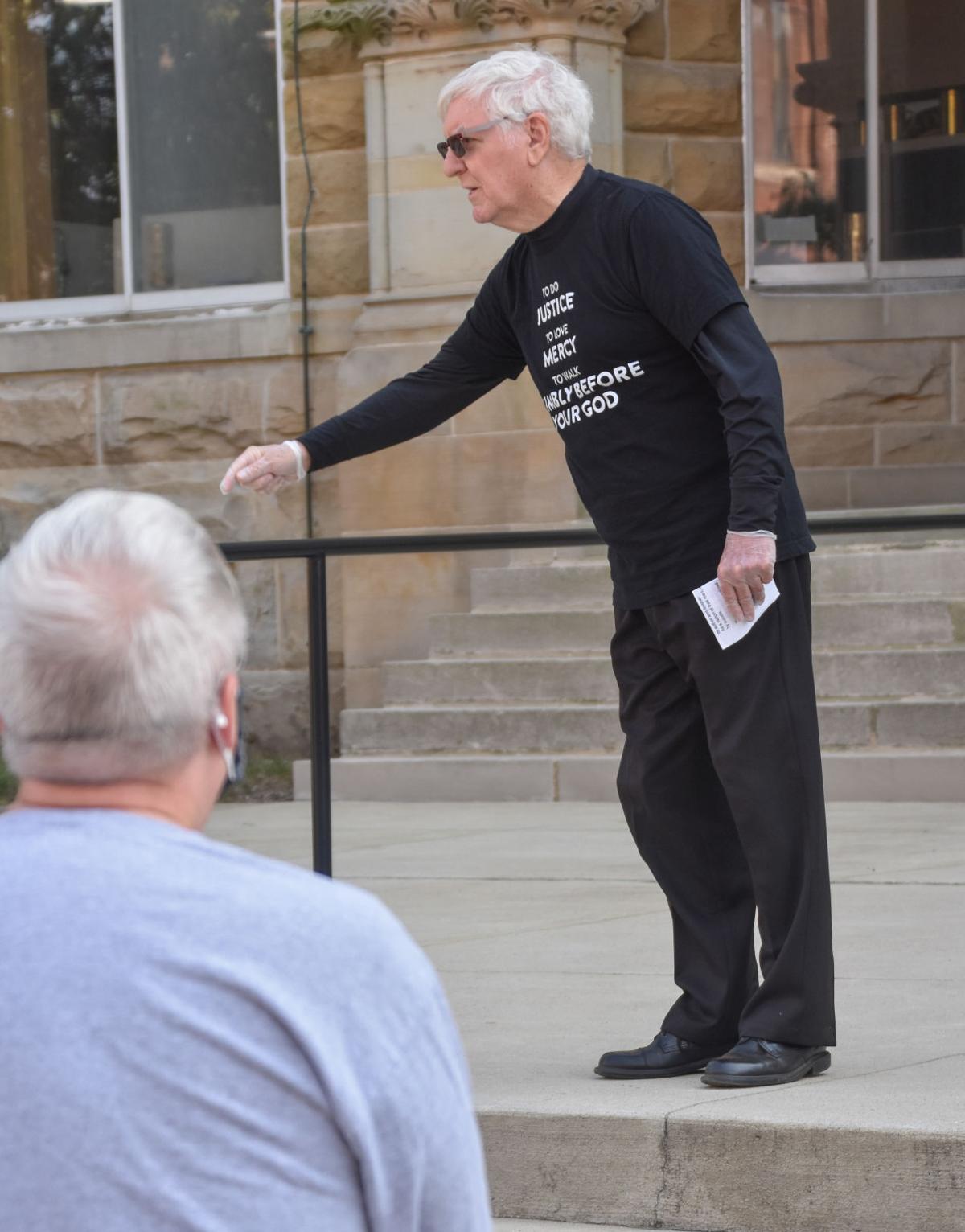 "It will never work and I don't care from what podium it's advocated," the Poshard said to a group at the Coles County Courthouse Tuesday.

The courthouse was one of a series of stops Poshard is making in counties he represented in the U.S. House of Representatives for a total of 10 years ending in 1999.

Also a former gubernatorial candidate and university president, Poshard led a group of about 20 people in four trips around the courthouse. Poshard wore a shirt with quotes from scripture while some who joined him carried signs with messages of type he was trying to convey.

He started by telling the group how he often met with other members of Congress for "many discussions about nonviolence."

That's not limited to acts of physical harm and destruction, he said, as messages through social media and other means are as much of a threat.

"Violence that's being spoken, that's the creator of division and disunity," Poshard said. "We're here to protest all kinds of violence."

Standing on the courthouse's northside steps after the march, effectively socially distanced from the mask-wearing crowd, Poshard leaned heavily on the words of Abraham Lincoln to send his message.

Before turning to the famous Gettysburg Address, Poshard first mentioned an 1838 speech in which Lincoln said the nation would "live forever or die by suicide," rather than succumb to a foreign threat.

Calling the Civil War "a prophecy that came true," he said Lincoln's Gettysburg Address "really spelled out" the "inheritance" and gifts of the Declaration of Independence.

Reciting the address from memory, Poshard emphasized its reference to the Declaration's "life, liberty and pursuit of happiness" along with Lincoln's comment on the war testing if the nation "can long endure."

"Our work is never finished as citizens of this democracy because there will always be challenges to this democracy," he later said.

Watch now: Inside the improvements at Lake Charleston

He also referred to Lincoln's second inaugural address, which came near the end of the Civil War at a time when many were "filled with vindication" toward the Confederate states.

Lincoln, however, embraced "malice toward none," which is "what we're about as a people," Poshard said, drawing applause from the audience.

Poshard's Coles County stop was his third of the day and his 13th since his series of messages started on Sept. 28. He also plans to visit 27 more courthouse between Wednesday and Oct. 22.

His mostly southern Illinois congressional district included Coles County after U.S. Census redistricting in 1990. After leaving the U.S. House, he lost the 1998 governor's election to George Ryan and later served as president of Southern Illinois University.

Look back: Charleston's past

Recognize these photos of Charleston's past?

Glenn Poshard will share his message of non-violence at 2 p.m. Friday, Oct. 9, outside the Moultrie County Courthouse in Sullivan.

More work on property the city of Charleston owns is now planned with an upcoming project to address drainage problems in the location.

The Mattoon City Council voted to support extending the bike trail to downtown and to award grants for improvements to three buildings downtown.

The fitness and healthy eating habits of Angela Kelly of Mattoon, who teaches in Shelbyville, are spotlighted in this fall's Hungry Girl magazine.

Free community COVID tests are coming to Charleston. Here's where.

Members of the public along with the Eastern Illinois University community can take part in free COVID-19 testing and flu shots next week.

A felony drug charge against a man was dismissed when he pleaded guilty to a misdemeanor property damage offense.

The coronavirus pandemic not only limited costume rentals but made for consideration of whether to continue traditional trick-or-treat activities and holiday-themed special events.

Mattoon woman gets probation for fight with police

A woman was sentenced to probation when she admitted fighting with a police officer who responded to a fight in which she was involved.

Building collapses into floodwaters in China

Astronaut captures the 'Southern Lights' aboard the ISS

Astronaut captures the 'Southern Lights' aboard the ISS

Former area Congressman Glenn Poshard leads a group of about 20 marchers around the Coles County Courthouse in Charleston on Tuesday afternoon. Poshard is visiting courthouses in each of the counties he represented in Congress to deliver messages of nonviolence.