Artist Peyton Morrow of Mattoon uses a boom lift Saturday to work on the U.S. flag mural that he has been painting on the west wall of House Brothers Tavern, 2009 Western Ave., in downtown Mattoon. READ MORE HERE.

MATTOON — A new mural honoring military service across multiple generations of a Mattoon family has been put into place on a downtown Mattoon wall in time for Memorial Day.

The centerpiece of this 3,000-square-foot mural at House Brothers Tavern imagines William Lincoln House, who founded this bar in 1905, at the counter alongside seven members of his family who served in the military from the Civil War through the war in Iraq. The mural also includes images of each of those seven veterans during their service years.

"I wanted to do something to honor everyone in the family who had worked in the tavern and was in the military," Bartels said.

Morrow, who is pursuing his master's in art at Eastern Illinois University, painted the giant flag that serves as the mural's backdrop last fall and then went to work over the winter in his Mattoon studio on the figures in the mural. Morrow said he used photos provided by the family and historical research to bring the figures to life. He painted the figures on sections of parachute cloth canvas that he affixed to the wall this spring.

Family history stretching back to William Henry House serving in the Union Army cavalry during the Civil War is depicted in the mural. This cavalryman, who is shown astride a horse at the top left corner of the mural, is the father of the tavern's founder, William Lincoln House. Records in the Mattoon Public Library's Local History Center report that William Henry House was the proprietor of the Pennsylvania House Hotel and that on Sept. 6, 1862 he joined Company H of the 123rd Illinois Infantry as a 2nd lieutenant.

The founder's son, Frederick House, served with the Army in the trenches of the Western Front during World War I, as seen in a mural image of him in his doughboy uniform. Bill House of Mattoon said his grandfather suffered a mustard gas attack in the trenches and his lungs troubled him ever after that.

The right side of the mural depicts its two living veterans — Bill House, who served in the Army in 1971-1973 in West Germany; and his son, Keegan House, who served two tours of duty with the Army in Iraq in the mid-2000s. Bill House is shown standing in front of the Campbell Barracks in Heidelberg and Keegan House is shown guarding a building in Iraq.

Keegan House said he looks forward to seeing parades on Western Avenue pass by the completed mural, especially on Veterans Day when the tavern hosts its annual gathering for veterans.

"It will look really cool," Keegan House said of this mural that can be seen from blocks away. His sister added, "I think the best view is when you are coming down Western Avenue and you see it."

As a Mattoon native, Morrow said he was glad to have the opportunity to create a mural that depicts the history of a local family and that will be seen by so many community members.

"It's pretty cool having artwork on such an established street that I grew up driving up and down," Morrow said.

Pictures Of The Week Photo Gallery

TOMB OF THE UNKNOWNS

Artist Peyton Morrow of Mattoon uses a boom lift Saturday to work on the U.S. flag mural that he has been painting on the west wall of House B…

The planned Mattoon Community Dog Park site is currently being used as a soccer practice field in the Roundhouse Complex.

Former slave Martha Smith had lived to be the oldest resident of Mattoon at the time of the 1917 tornado.

The Memorial Day Celebration will be held from 10 a.m. to 1:30 p.m. Monday at the Lake Mattoon beach and pavilion.

The Five Mile House is at the northeast corner of Illinois Route 130 and Westfield Route south of Charleston.

Charleston Community Band to hold first concert of the season

Charleston Community Band concerts will be held at 7:30 p.m. every Thursday through July 7 at Kiwanis Park, with a rain location at the EIU Doudna Fine Arts Center.

Biden's Mission In Europe: Shore Up Alliance Against Russia 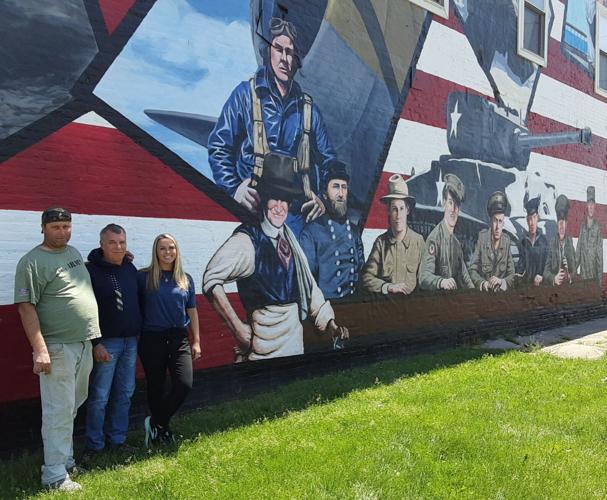 Bill House, at center, is pictured with his son, Keegan House, and daughter, Kelsa House Bartels, on Monday next to a new mural on the side of their family's House Brothers Tavern in Mattoon. The mural depicts the multiple generations of their family that have served in the military. 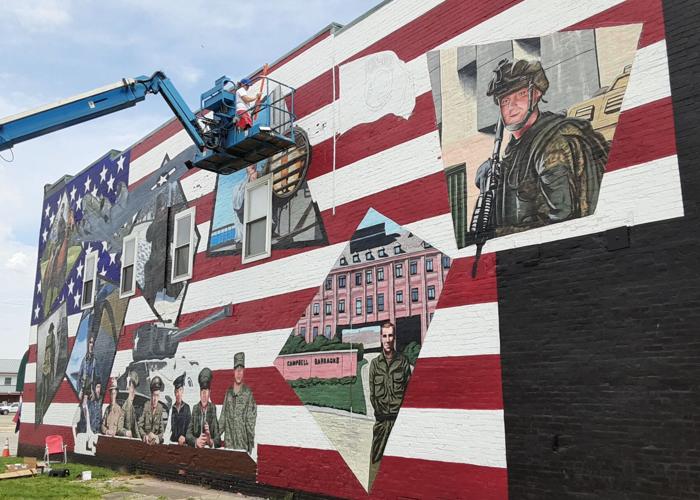 Artist Peyton Morrow of Mattoon is pictured this spring using a boom lift to put finishing touches on the new House family military history mural on the west wall of House Brothers Tavern in Mattoon.