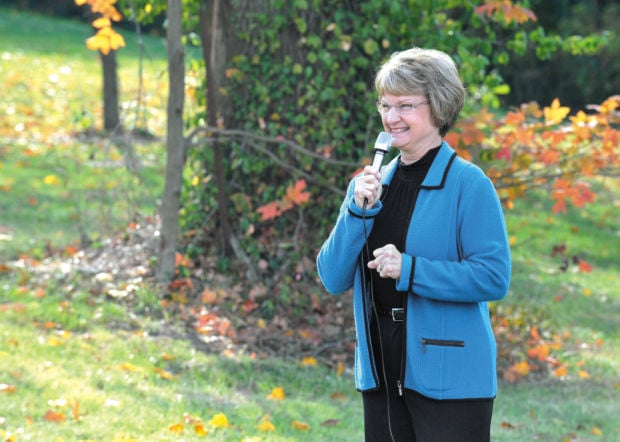 Martinsville on the Move team chairman Brenda Littlejohn talks about the plans for the Linn Park Amphitheatre Monday morning (October 21, 2013) during the groundbreaking ceremony in Martinsville. (Photo by Ken Trevarthan/Journal Gazette & Times-Courier). 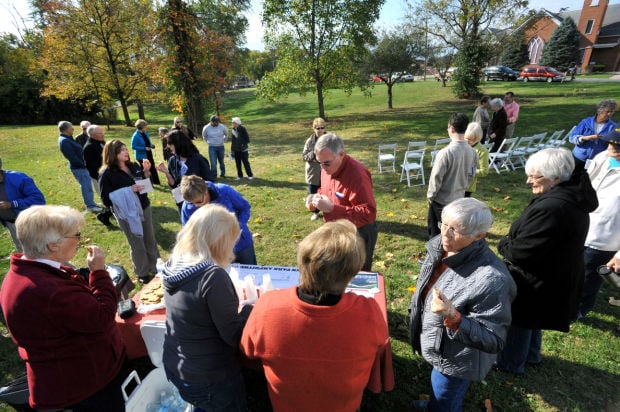 Ceremony attendees enjoy conversation and refreshments in the area of the future Linn Park Amphitheatre Monday morning (October 21, 2013) during the groundbreaking ceremony in Martinsville. (Photo by Ken Trevarthan/Journal Gazette & Times-Courier).

MARTINSVILLE — Ground was ceremonially broken Monday for the construction of an amphitheater at the planned Linn Park, a project made possible by the estate of sisters Lois and Leanore Linn.

The 40-by-30-foot amphitheater is slated to be constructed on part of the former Linn family homestead, about a block northeast of downtown Martinsville. The new city park is being created by combining the homestead with adjacent property purchased to the south along Cumberland Street through the sisters’ estate, administered by the Lois & Leanore Linn Charitable Foundation.

Foundation board Chairman Kent Littlejohn said during the groundbreaking that the sisters grew up in a two-story, white-frame house across from their father’s blacksmith shop. He said they continued to reside in this house while Lois worked for 49 years at the nearby Littlejohn Grain Inc. office. Lois Linn died in 2006 and Leanore died in 2010, leaving an estate dedicated to community projects.

“They wanted to give back to the community. In many ways, the community was their family,” Kent Littlejohn said.

The foundation has worked closely with Martinsville on the Move, a booster group started in recent years through the Martinsville Mapping community planning effort.

Brenda Littlejohn, chairwoman of the Martinsville on the Move Festivals and Events Action Team, said the group set a goal of bringing more special events to the community but found there is a shortage of places to hold such events. She said the group then began to pursue to idea of developing an amphitheater on the planned Linn Park, which is located next to the city’s downtown park.

More than $85,000 has been raised so far for the amphitheater project through the sale of engraved paving bricks and through other donations from the community, Brenda Littlejohn said. Plans call for using these bricks to create a pathway through a botanical garden.

The city has already demolished the vacant houses and out buildings at the Linn Park site. Brenda Littlejohn said excavation work is set to begin soon so that a concrete floor and stage can be constructed for the amphitheater.

“We are hoping in a week or so the bulldozers will be out here,” she said.

Brenda Littlejohn said subsequent phases of construction will include the installation of a roof, placement of stones on the back of the amphitheater, fabrication of a rest room and a dressing room, and landscaping, adding that fund raising will take place throughout this process. She said organizers hope to have the amphitheater ready to host a performance by Trouble & Co. of Martinsville during the June 7-8 Heritage Days festival.

Some of the other possible uses of the amphitheater could include movie showings, lectures, children’s programs, reunions and weddings.

“We see a lot of potential in the amphitheater, and we would like to have your suggestions too,” Brenda Littlejohn said to the audience at the groundbreaking.

More information about the amphitheater project is available by calling 217-382-3033 or emailing bklittle@fairpoint.net.

What the Colonial Pipeline Hack Means for Fuel Supplies

Watch now: Pritkzer on how Illinois state employees will return to the office

Watch now: Pritkzer on how Illinois state employees will return to the office

A man was sentenced to prison when he admitted fondling a 10-year-old girl.

Police say a man locked himself in a bathroom but negotiations successfully led to his arrest for violating an order of protection.

The Mattoon man was arrested Monday afternoon after a woman reported that he hither and wrapped a plastic bag around her head.

A Casey man was injured when he lost control of his motorcycle on a curve in rural Clark County early Saturday.

Martinsville on the Move team chairman Brenda Littlejohn talks about the plans for the Linn Park Amphitheatre Monday morning (October 21, 2013) during the groundbreaking ceremony in Martinsville. (Photo by Ken Trevarthan/Journal Gazette & Times-Courier).

Ceremony attendees enjoy conversation and refreshments in the area of the future Linn Park Amphitheatre Monday morning (October 21, 2013) during the groundbreaking ceremony in Martinsville. (Photo by Ken Trevarthan/Journal Gazette & Times-Courier).