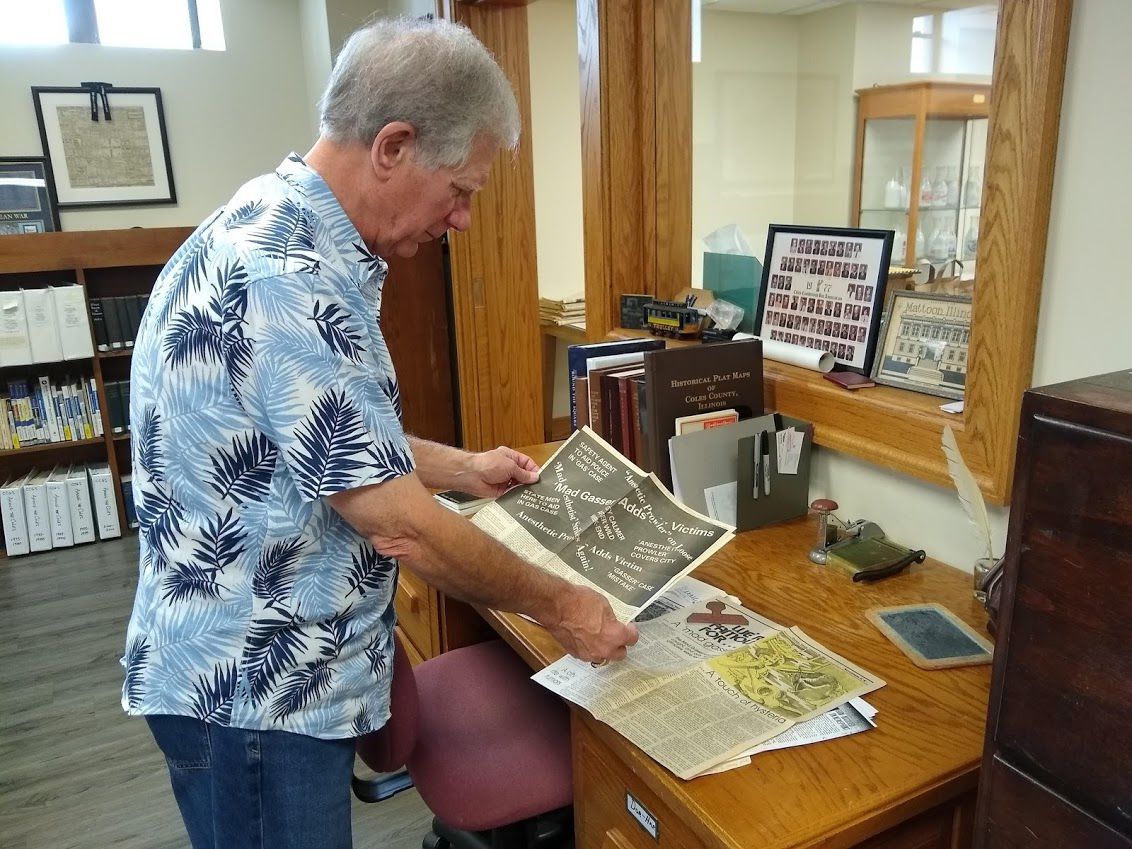 The Mattoon Daily Journal-Gazette reported news of the 'Mad Gasser' in September 1944. 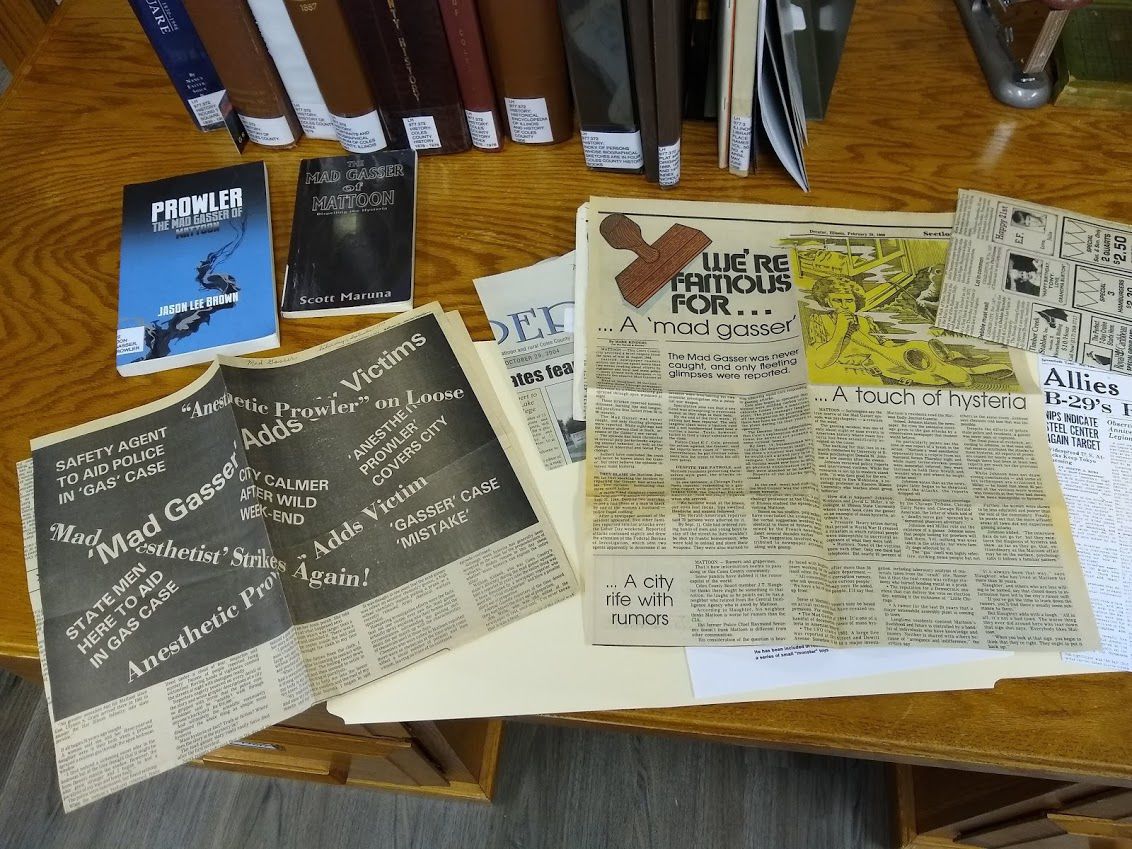 A file in the Mattoon Public Library's local history center contains newspaper clippings and books about the "Mad Gasser" incidents that occurred from late August to mid-September 1944 in Mattoon. 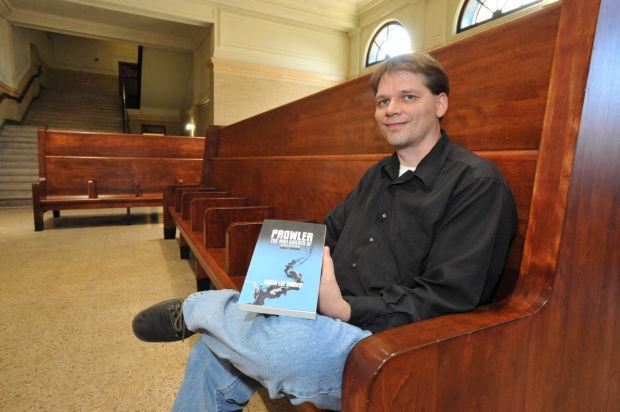 Author Jason Lee Brown is pictured in 2014 at the Mattoon train depot. The depot served as a backdrop for some of the scenes in the Mattoon native's book, "Prowler: The Mad Gasser of Mattoon."

MATTOON — Seventy-five years have passed since several Mattoon residents fell ill during a series of incidents that some at the time blamed on a sinister "Mad Gasser" and others later attributed to mass hysteria.

The approximately two-week long series of "Mad Gasser" incidents, which started on Aug. 31, 1944, still sparks the interest of those looking into Mattoon history, tales of the unknown, and case studies on mass hysteria. The "Mad Gasser," if there was one, was never identified or apprehended by authorities.

Mattoon Public Library's local history center maintains a "Mad Gasser" file, including local newspaper articles written when the community was gripped by fear of a cloaked figure who was reportedly injecting noxious gas into homes.

The Sept. 8, 1944, Daily Journal-Gazette ran a front page article, amid World War II news, about recent victims of the "mad prowler," such as a 60-year-old man who reported being sickened by "something sprayed through a bedroom screen window."

"Mattoon's 'mad anesthetist' apparently took a respite from his maniacal forays Thursday night, and while many terror stricken people were somewhat relieved, they were inclined to hold their breath and wonder when and where he might strike again," the article reported.

Chris Suerdieck, who volunteers in the library's local history center, said the "Mad Gasser" file has been requested a few times during the last year. He said one request was from North Carolina family members who were visiting the community and wanted to research the history of their former Mattoon hometown.

Suerdieck said another request was from a psychologist in Indiana who was looking into the "Mad Gasser" newspaper incidents as part of his research.

"He was doing a study on mass hysteria, and 'the Mad Gasser' came up on his radar screen," Suerdieck said.

Mass hysteria has long been associated with the "Mad Gasser" incidents. The Journal of Abnormal and Social Psychology published, "The 'Phantom Anesthetist' of Mattoon: a Field Study of Mass Hysteria," in 1945.

"One woman's hysterical report of being gassed and paralyzed at night led to heightened suggestibility of many others," the American Psychological Association wrote in its field study summary. "A surge of telephone calls to the police, reporting prowlers and 'gassers,' was followed by an abnormal decrease in calls to the police after the attacks were judged to be imaginary."

Former Mattoon resident Jason Lee Brown, who wrote a "Prowler: The Mad Gasser of Mattoon" novel in 2014, said he was interviewed about the "Mad Gasser" and mass hysteria by Springfield public radio in 2016 for a segment about the nationwide "clown scare" sightings at the time.

Still, Brown said he has found that people outside of Mattoon tend to associate the "Mad Gasser" with tales of the unknown, such as the "Mothman" folklore of West Virginia, rather than with mass hysteria. He said there are different theories about how the "Mad Gasser" may have been an actual Mattoon resident.

Brown said the "Mad Gasser" story is compelling because there were so many incidents — approximately two dozen in a row — from late August until mid-September without a clear resolution.

"Then they just stopped and no other incidents were reported. That lends itself to all kinds of possible outcomes about what caused it," Brown said of the ongoing speculation.

There is a lengthy page about the "Mad Gasser" on Wikipedia that includes a listing a locations of reported sightings or residences where people mysteriously fell ill.

One of those residences along Moultrie Avenue is now home to Steve Sheff of Mattoon. Sheff said he has lived in this approximately 100-year-old house for 23 years now, but had not realized it had "a little notoriety" from the "Mad Gasser" and Wikipedia.

Sheff said he has read newspaper articles about the "Mad Gasser" and believes that the large number of witness accounts indicate there might have been something more to their stories than just mass hysteria.

"It was a weird situation," Sheff said.

MATTOON -- The "Mad Gasser" incidents in 1944 have become a local legend in Mattoon, a case study in possible mass hysteria for psychologists,…

MATTOON (JG-TC) -- During about two weeks in September 1944, several Mattoon residents reported smelling a sickly sweet odor in their homes an…

A granite statue of a mountain lion became a local landmark during its 74 years on the lawn at 2501 Western Ave., and now it's found a home on the front lawn of the Mattoon Public Library.

There now are more ways to see an artist's concept of the divide between political candidates and in the nation leading up to the Civil War.

Community members will have an opportunity to help select the top international short film of 2019 when the Mattoon Public Library hosts two different screenings of the Manhattan Short film festival on Sept. 28 and Oct. 1.

Two blocks of Broadway Avenue will be closed to traffic Friday night so that children can trick or treat and play carnival games there.

The Mattoon Daily Journal-Gazette reported news of the 'Mad Gasser' in September 1944.

A file in the Mattoon Public Library's local history center contains newspaper clippings and books about the "Mad Gasser" incidents that occurred from late August to mid-September 1944 in Mattoon.

Author Jason Lee Brown is pictured in 2014 at the Mattoon train depot. The depot served as a backdrop for some of the scenes in the Mattoon native's book, "Prowler: The Mad Gasser of Mattoon."