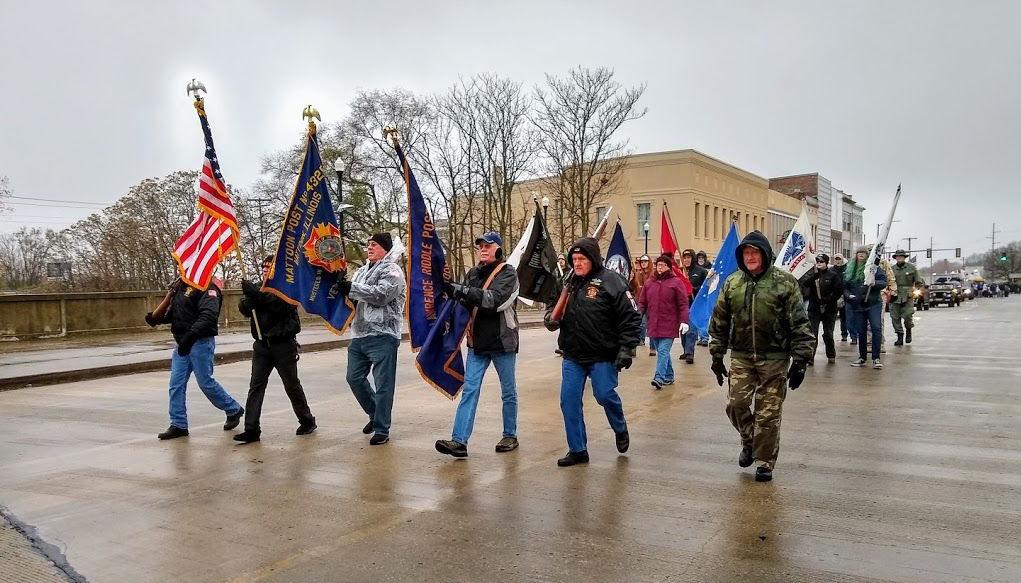 A veterans color guard marches east on Broadway Avenue while leading the Veterans Day parade on Monday in Mattoon. 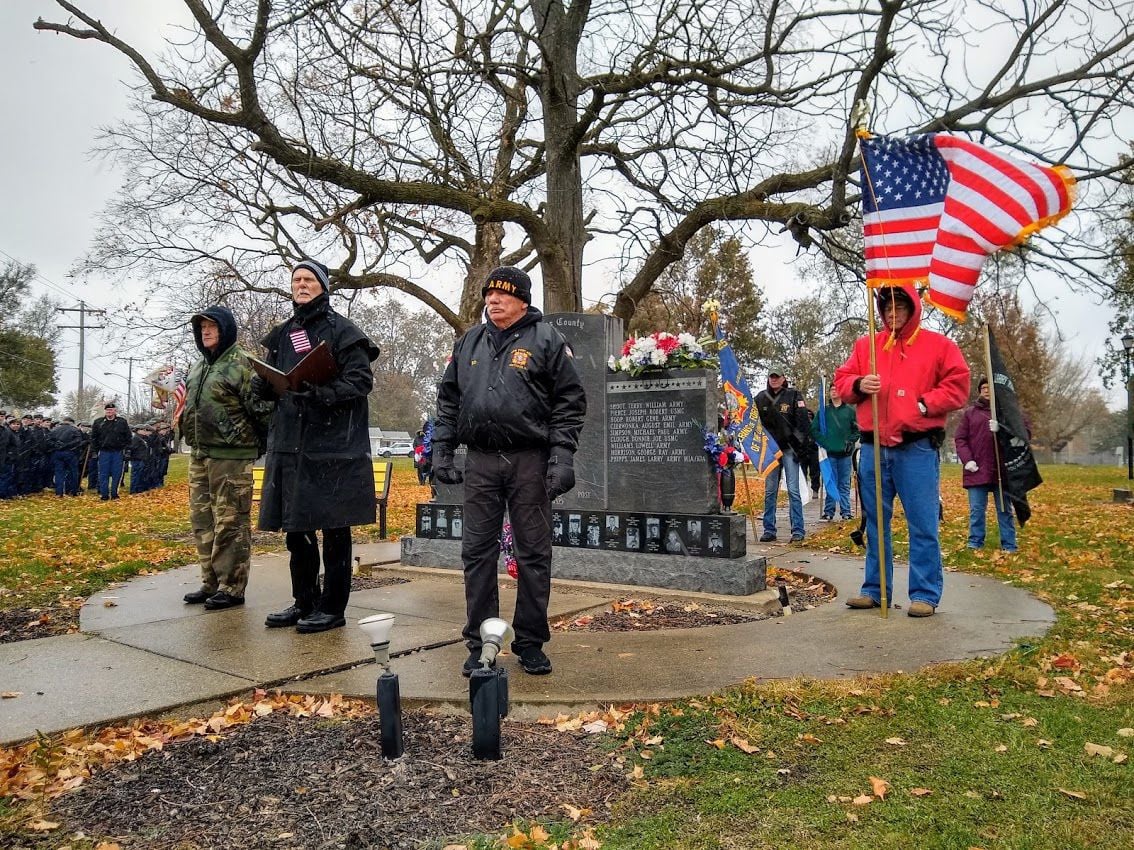 Mattoon American Legion finance officer Mike Weaver, second from left in the foreground, speaks during the Veterans Day ceremony that they and the VFW held on Monday at Peterson Park. 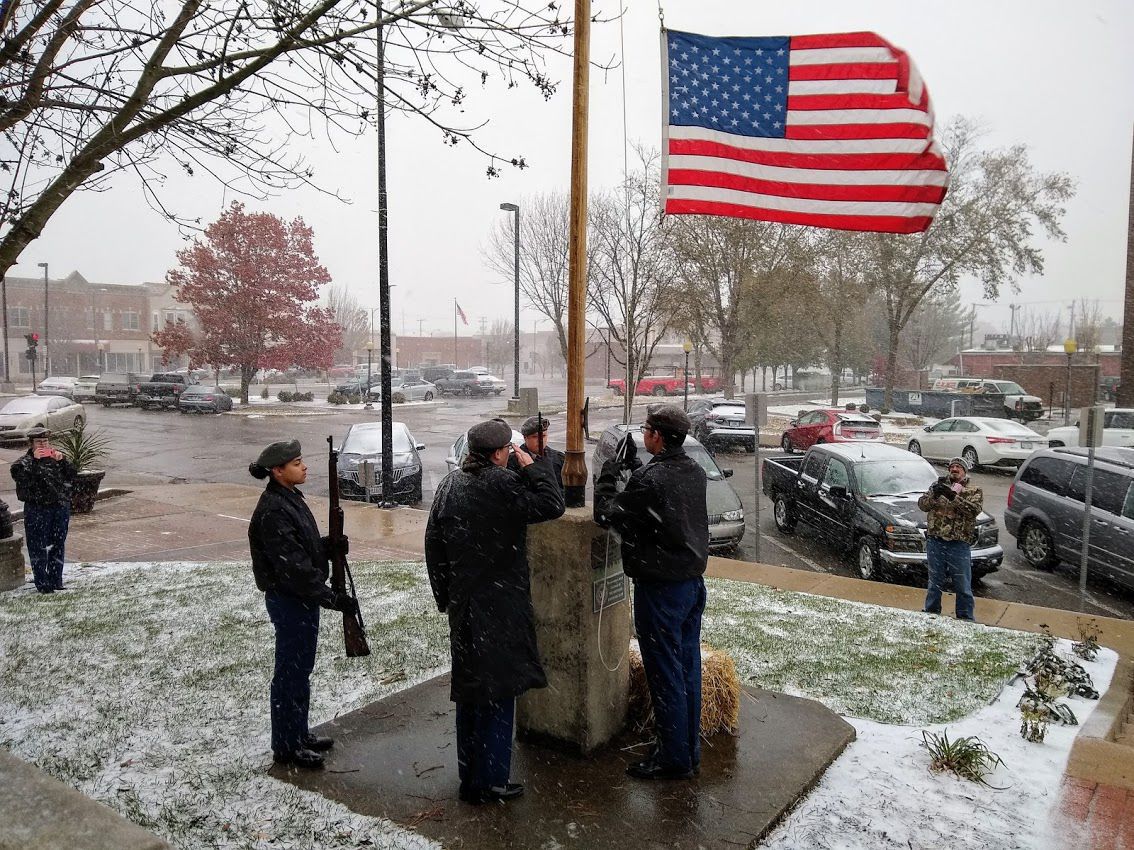 A Mattoon High School JROTC color guard raises the flag during a dedication ceremony on Monday for the restored flagpole at the Mattoon Public Library. 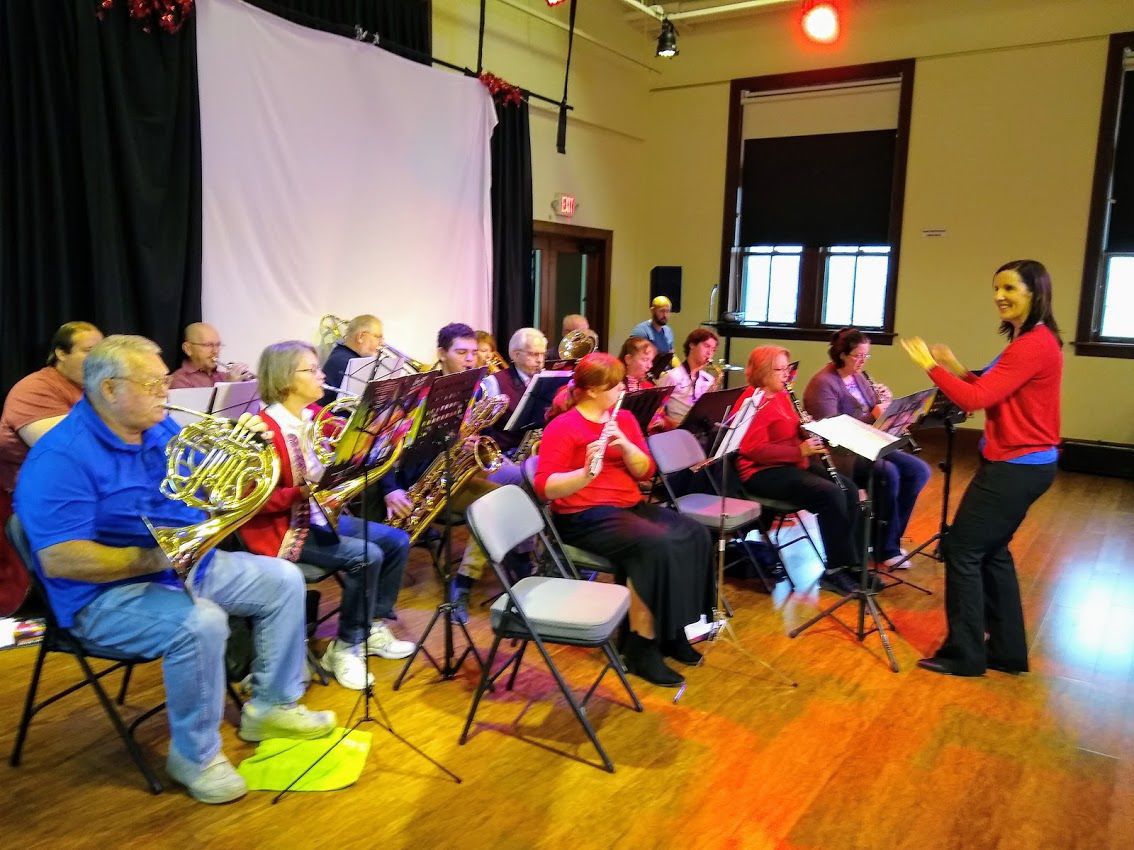 The Mattoon Community Concert Band, led by Jessica Closson, performs a Veterans Day concert on Monday in the Lone Elm Room at the train depot.

MATTOON — The community held a series of four Veterans Day events on Monday despite frigid weather that included snowfall.

The events consisted of the Mattoon Community Concert Band's second annual Veterans Day concert, the longstanding traditions of a parade followed by a memorial ceremony, and the dedication of a restored flagpole.

Monday's events started at 9 a.m. with the concert band, led by Jessica Closson, performing indoors at the Lone Elm in the train depot. The band played a set of 10 patriotic songs ranging from "The Star-Spangled Banner" to "God Bless America."

"We love getting together to create music and relationships," Closson said, adding that the band was glad to have the opportunity to honor veterans. She noted later that this inter-generational band includes several veterans.

One of those veterans is trumpeter Scott McPeak of Charleston, who served as an Army bandsman in 2005-2008 and a civil affairs sergeant in 2010-2011. With the Fort Leonard Wood, Missouri band, McPeak said he played at post graduations and in community parades.

"I played with some great musicians in the Army band. It was an extraordinary experience and I am glad I got to play with them," McPeak said.

The concert concluded in time for audience members to watch the parade at 10 a.m. The procession traveled east on Western and then Broadway avenues, past the depot, to Peterson Park.

A Veterans of Foreign Wars color guard led the procession, which included the Mattoon High School JROTC cadet corps and several other entries.

Sophomore Kelley Stewart, a cadet staff sergeant in JROTC, said the weather was cold, but he still had a lot of fun marching with his fellow cadets to pay tribute to veterans. Stewart said he is on the drill team, so he is accustomed to marching.

The parade concluded at Peterson Park in front of the Coles County Vietnam memorial. There, Mattoon's VFW and American Legion posts held a memorial ceremony at 11 a.m.

Mattoon Legion finance officer Mike Weaver said he has been fortunate to have met many real life heroes: veterans who received medals and ribbons for their acts of bravery. He said there are also many "invisible heroes" who did not receive public accolades.

Weaver said these veterans have important stories to tell, but might be reluctant to share them. He said his father was an "invisible hero," a pilot who was downed during World War II, taken prisoner, and then escaped. He said his mom finally convinced him to record his experiences.

"Please use this Veterans Day to really talk with your veteran. There is no need to search for a hero on TV, in the movies, or online, all you have to do is look across your dinner table at your 'invisible hero,'" Weaver said.

At noon, the Mattoon Exchange Club held a dedication ceremony for the restored flagpole in front of the Mattoon Public Library. A JROTC color guard raised the flag during this event.

Club President Connie Jones said this pole is a replica of the Camp Grant flagpole on display in the library. The original flagpole was part of the recruiting camp that Ulysses S. Grant led in Mattoon before becoming the Union Army commander in the Civil War.

"Today, we recognize all of the proud men and women of the military who have sacrificed and served to honor and protect the freedoms we enjoy in the United States," Jones said. "One of those veterans was Ulysses S. Grant, and today's dedication represents the significance he played in Mattoon history."

Consolidated Communications employees and area veterans collected more than $16,500 during the Operation Honor Guard Day of Giving on Oct. 2 at the company’s corporate office in Mattoon and at Family Video in Charleston.

MATTOON -- An etched portrait of U. S. Army First Sgt. George Ray Morrison was recently placed on the Coles County Vietnam memorial alongside …

CHARLESTON — Traffic was backing up on Illinois Route 130 at Lake Charleston at approximately 9:30 a.m. Tuesday, Nov. 12, as motorists continu…

Motorists continued to have some difficulties with road conditions Tuesday after a rapid, record snowfall hit the area on Veterans Day.

Coles Co. Board meeting ends with dispute over adjournment attempt

A dispute erupted Tuesday after a Coles County Board member attempted to adjourn meeting while public comment presentation was still going on.

A veterans color guard marches east on Broadway Avenue while leading the Veterans Day parade on Monday in Mattoon.

Mattoon American Legion finance officer Mike Weaver, second from left in the foreground, speaks during the Veterans Day ceremony that they and the VFW held on Monday at Peterson Park.

A Mattoon High School JROTC color guard raises the flag during a dedication ceremony on Monday for the restored flagpole at the Mattoon Public Library.

The Mattoon Community Concert Band, led by Jessica Closson, performs a Veterans Day concert on Monday in the Lone Elm Room at the train depot.