OTTAWA — Jelani Day's family attorney has responded after toxicology testing results were announced Thursday amid the investigation of his death.

Caffeine and evidence of nicotine and cannabis use were found during the testing, but the amounts were considered not toxicologically significant, the report said.

"The toxicology report was exactly what we expected it to be and unfortunately provides no answers as to what happened to Jelani," said Hallie Bezner, the family's attorney.

LaSalle County Coroner Rich Ploch declined to comment on the report “due to the ongoing investigation." Results were received Wednesday.

The Pantagraph obtained the report prepared by Horsham, Pennsylvania-based NMS Labs under the Freedom of Information Act. Tissue samples were taken from the liver, kidney and brain on Sept. 8.

A cause of death for Day has not been released by law enforcement.

Jelani "J.J." Day, 25, was last seen on Aug. 24 entering the Beyond/Hello dispensary in Bloomington. Authorities on Sept. 23 said his body was found in the Illinois River.

Jelani Day, a 25-year-old graduate student at ISU, was last seen the morning of Aug. 24 walking into the Beyond / Hello in Bloomington, accord…

Authorities are investigating after body was recovered Saturday morning from the Illinois River near LaSalle-Peru.

"I want you to know, Jelani is not dead and we will find him," said his mother, speaking to a crowd of supporters on Friday night.

Carmen Bolden Day, mother of missing Illinois State University student Jelani Day, speaks at an event Friday night in support of the search for him.

"I just want to hear him call me and say, 'Mama, I just called you because I want to hear your voice,'" Jelani Day's mother said Wednesday.

Carmen Bolden Day, mother of Jelani Day, recounts the last phone call she had with her son prior to his disappearance. Several people gathered…

BLOOMINGTON — Police, family and friends continue to search for Illinois State University graduate student Jelani Day after he went missing last week. He was last on video camera on Aug. 24 at the Bone Student Center on campus.

Kinzy about missing ISU student: 'I ask that we all provide support to each other'

The president of Illinois State University during her annual address to the campus community spoke about a graduate student who has been missing.

A body found floating in the Illinois River in LaSalle County has been identified as that of missing Illinois State University graduate student Jelani Day, according to the Bloomington Police Department.

The LaSalle County Sheriff's Office announced this afternoon a person of interest sought by Peru Police has been cleared by investigators and is not a suspect in the case.

Among the attendees is the Rev. Jesse Jackson. This burial comes 10 days after the family held a funeral service at Danville High School to honor the Illinois State University grad student.

Hallie Bezner, attorney for Day’s family, also told The Pantagraph: “I think that people read between the lines to try to have some conspiracy that doesn't exist."

State law enforcement officials told The Pantagraph on Sunday that DNA backlogs did not slow down confirmation of the body found in the Illinois River last month as Jelani Day.

During Jelani Day's celebration of life, his four siblings sing a tribute backs by a community choir. READ MORE HERE.

Carmen Bolden Day says to work does not end with laying her son to rest. READ MORE HERE.

Pantagraph journalists spent last week in Danville speaking to those who knew Day, and they described him as big-hearted, hard-working and on a path to success.

Watch now: Over 100 meet in LaSalle to release balloons for Jelani Day

"Thank you for realizing Jelani was important, not just to us, he was important to everybody," his mother, Carmen Bolden Day, said.

The Rev. Jesse Jackson told The Pantagraph he expects as many as 1,000 people to attend a Friday march in Bloomington-Normal for Jelani Day, whose mysterious death has stirred national attention.

The Rev. Jesse Jackson speaks with The Pantagraph Thursday morning about the planned march in Bloomington and Normal for Jelani Day, the Illin…

"We want to gain one thing, and that is justice for Jelani Day," said Cameron Barnes, national youth director with the Rainbow PUSH Coalition.

In response to a letter sent this month by state Rep. Kambium Buckner, Peru Police Chief Robert Pyszka said that investigators with the multi-jurisdictional unit gave all files in the case of Jelani Day's death to the FBI.

'The implications are not true,' Jelani Day's family says after autopsy release

The autopsy results released this week in the Jelani Day case have not changed his family’s message.

Carmen Bolden Day, mother of Jelani Day, addresses supporters who showed up Friday to a march led by the Rev. Jesse Jackson for her son. Activ…

The Rev. Jesse Jackson and hundreds marched from Bloomington to Normal on Friday for Jelani Day, the Illinois State student whose death remains a mystery.

The Rev. Jesse Jackson took part in a march Friday for Jelani Day, the Illinois State University student whose remains were found in the Illin…

Marchers move through Bloomington calling for an investigation into the death of Jelani Day. READ MORE HERE.

Carmen Bolden Day says to work does not end with laying her son to rest. READ MORE HERE.

What do we know about the Omicron variant? 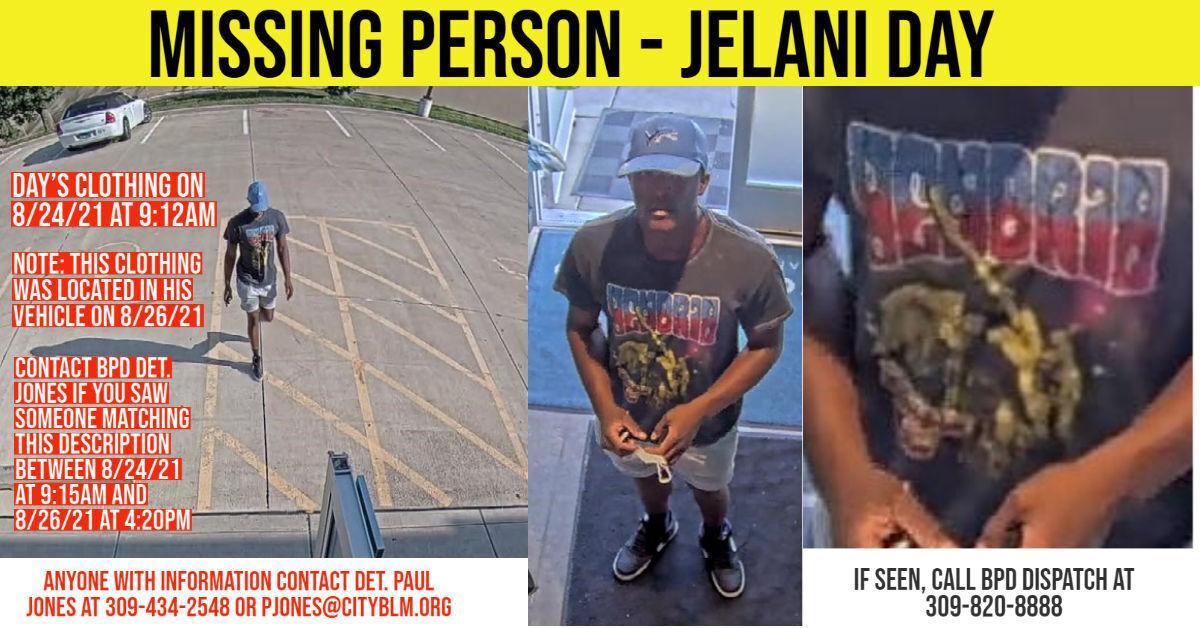 Images released by Bloomington police related to the missing persons case of Jelani Day are shown.