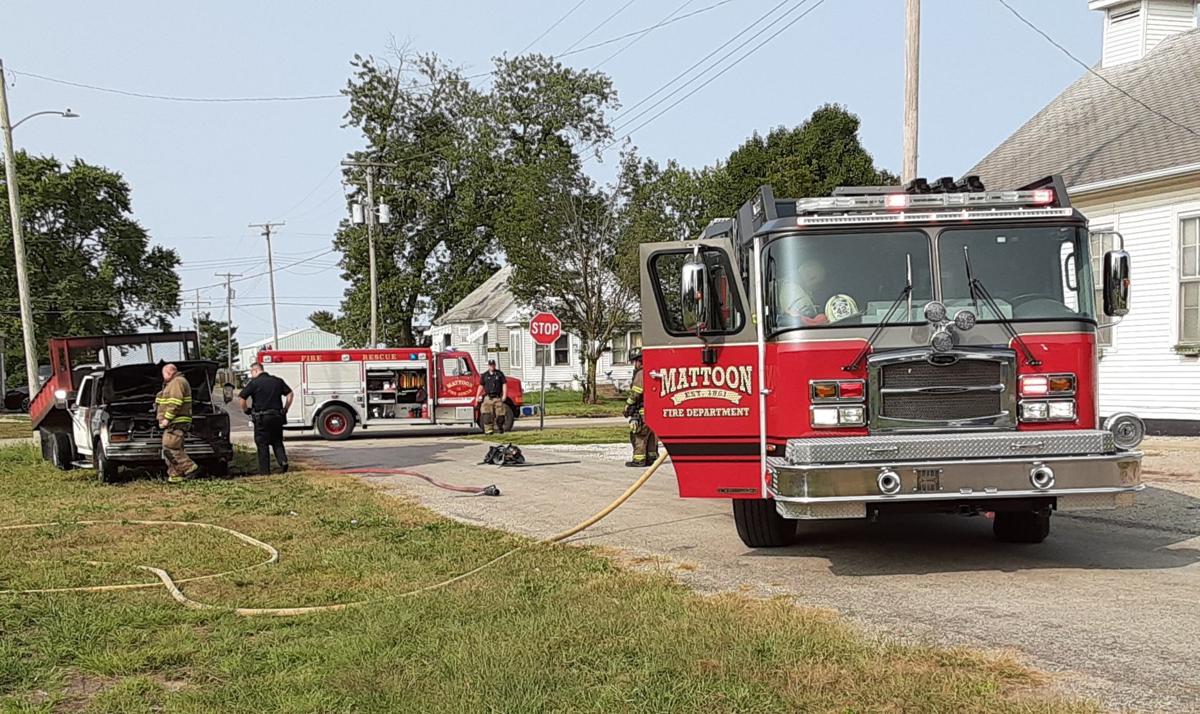 Mattoon firefighters finish up their work at a truck fire scene on Sept. 15 off the south side of DeWitt Avenue and Second Street. The Mattoon Fire Department has not operated an ambulance service since summer 2018, but firefighters continue to carry emergency medical equipment on their fire trucks and use the items as needed. 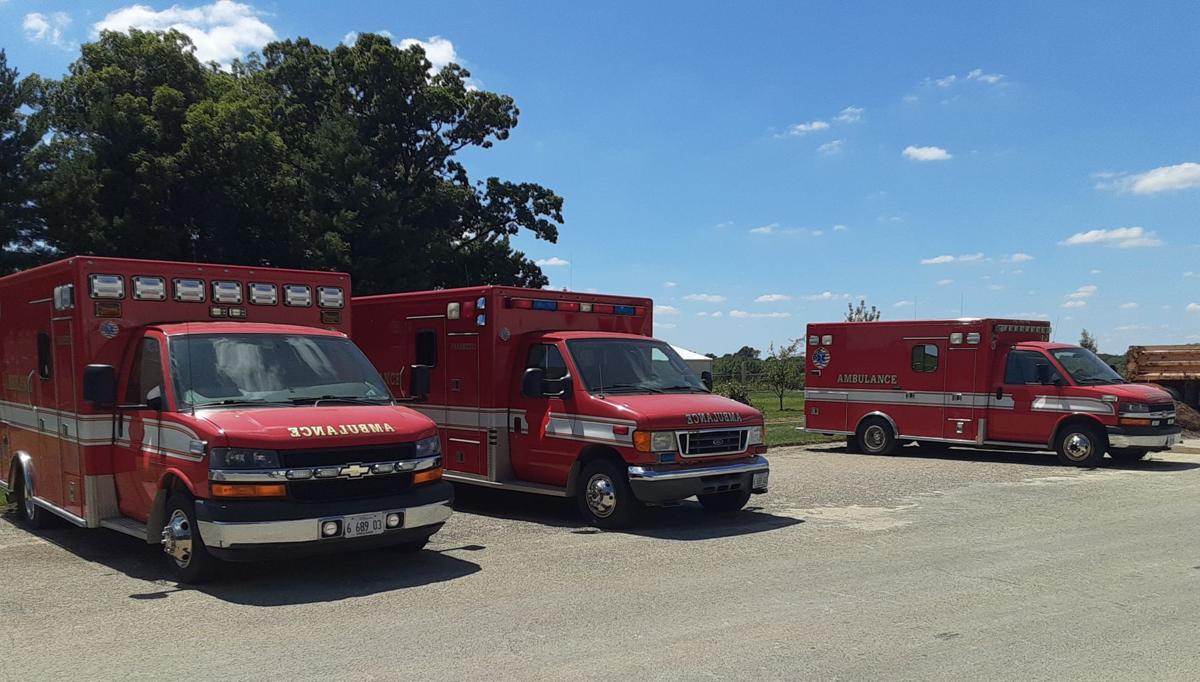 The Mattoon Fire Department's three former ambulances are in storage in the parking lot of the Mattoon Water Treatment Plant.

MATTOON — The city will likely appeal a state panel's ruling that the Mattoon Fire Department's ambulance service should be reinstated, officials have said.

The three ambulances have been in storage since the city shuttered its emergency medical service on July 25, 2018, but officials have said that new equipment would be needed before the service could resume.

An Illinois Labor Relations Board State Panel ruled on Aug. 18 that the service should be restored because the city violated firefighters' collective bargaining agreement by the way it was eliminated.

City Administrator Kyle Gill said the ruling hinges on differing interpretations of the Illinois Substitutes Act's scope. He said the city maintains that it did not substitute "unqualified contractors" for firefighter-paramedics, but instead exercised its right to eliminate the municipal ambulance service and rely instead on the certified paramedics in existing private service in Mattoon.

"If we want to get the Substitute Act question answered, we need to go through the appeals process," Gill said. He added that the city has filed motions with the Illinois Appellate Court saying that it intends to appeal and asking for the ruling to be put on hold until the appeals process concludes.

"We have not made any final decisions yet (on appealing), but we have started to prepare to go down that road."

Watch now: Richard Nixon ate a sandwich in Sullivan 60 years ago. Here's the story of the man who kept it.

The case stems from the city council adopting a resolution on July 18, 2017 to eliminate the ambulance service as a cost cutting measure. City officials reported then that this service was too costly and was duplicating the work of private providers. Mattoon Firefighters Association Local 691, which subsequently filed grievances, has maintained that the service provided essential community care and city revenue.

Following rulings in favor of the city and the union on various points, the ambulance dispute reached a new stage with the state panel's recent ruling.

"The city implemented the change in the firefighters' working conditions under the parties' current agreement without bargaining to impasse or submitting the matter to interest arbitration," the panel wrote. "Because the parties' collective bargaining agreement requires the parties to provide ambulance services, the cessation of city-operated ambulance services and the resultant transfer of firefighters' work responding to emergency medical calls changed the existing conditions of employment."

Firefighters union President Bart Owen said the appeals process can take up to a year. He noted that the union's civil contempt filing from last year in Coles County Circuit Court is still pending. This filing calls for the city to be held in contempt for not bringing contracted staffing levels back up to 30 firefighters as called for by a Dec. 9, 2019 court ruling.

City Council member Rick Hall, who serves as fire commissioner, said the city would fill vacant positions if it could. He said the city has been having trouble getting candidates qualified to serve as both firefighters and as paramedics, which is called for by the current union contract.

"They know we are trying to hire people," Hall said. "There just seems to be a nationwide shortage of paramedics."

The current contract expired on April 30, 2018, but is continuing to remain in effect until a new one can be reached. Owen said no new arbitration sessions have been scheduled, but lawyers for the city and the union have been trying to work out an agreement.

"We have a lot of things that are tentatively agreed upon," Gill said of the negotiations. He said have made progress on wages, health insurance and other issues, but still disagree on minimum staffing and manpower.

The fire department's former ambulance have remained in storage at the water treatment plant. Owen estimated they could be put back into service in a couple of months using the department's supply of emergency medical equipment, plus some new items that would need to be purchased. Firefighters store this equipment on their fire trucks and use it as needed.

Gill said the three ambulances, ranging in age from 2004 to 2013, each have more than 150,000 miles on them. He said at least one of them might need to serve as just a backup ambulance if the service were reinstated.

In addition, Hall said only 12 of the 21 firefighters on staff have paramedic certification. He said the city and the union do not have the available manpower with the skillset needed to operate the service at its previous level.

"It would be very difficult for both parties to get back into the ambulance business without a lot of work," Hall said.

A Charleston man was injured in a two-vehicle collision late Wednesday morning on Illinois Route 49 in Clark County, police said.

A Mattoon man has been charged with shooting another man with a BB gun, court records show.

A news release from the health department said the county's total number of cases of the disease caused by the coronavirus is now 1,486.

A decision that a shooting range isn't subject to Charleston zoning regulations was affirmed by the city's Board of Zoning of Appeals and Planning Thursday.

Mattoon firefighters finish up their work at a truck fire scene on Sept. 15 off the south side of DeWitt Avenue and Second Street. The Mattoon Fire Department has not operated an ambulance service since summer 2018, but firefighters continue to carry emergency medical equipment on their fire trucks and use the items as needed.

The Mattoon Fire Department's three former ambulances are in storage in the parking lot of the Mattoon Water Treatment Plant.