CHICAGO — A long-awaited plan to create 110 new recreational marijuana retail licenses and expand minority ownership in Illinois is expected to be introduced in Springfield this week.

The legislation, which is supported by the governor’s office, is meant to address complaints about the long-stalled licensing process from minority investors who have been almost entirely shut out of the industry.

“We’re making sure that we get cannabis right in Illinois … to end the monopoly of the cannabis industry in Illinois,” said the primary sponsor of the measure, state Rep. La Shawn Ford, a Chicago Democrat.

The final 35 “social equity” licenses would go only to applicants who have majority ownership by people who live in an area that the state has designated as disproportionately affected by the war on drugs, or by those who have been arrested for or convicted of a minor cannabis offense, or who have an immediate family member with such a history.

Unlike the two rounds of 75 licenses, the 35 social equity licenses granted under the new bill would not include the current provision that allows companies to qualify for social equity by merely hiring 10 people from disproportionately affected areas, which generally are low-income, high-crime areas.

The bill would also establish a plan for awarding five remaining medical cannabis licenses, with their accompanying recreational marijuana licenses, to social equity applicants; would allow existing medical/recreational businesses to relocate within the same medical district; and add disclosure provisions to match the recreational cannabis law for more transparency on the ownership of license holders.

In addition, the bill would allow medical cannabis patients to buy from any dispensary, instead of registering with a single dispensary, and it would reduce the backlog in approving new employees so they could begin working while waiting for a required background check.

The bill is meant to address complaints from minority entrepreneurs that wealthy white investors made up most of the 21 applicants who qualified for the first lottery for 75 recreational licenses. After objections that identical exhibits were scored differently for different applicants, or that the scoring process was confusing, state regulators last year indefinitely delayed the lottery to award the licenses and are still rescoring corrected applications.

“It’s a way to keep the same applicant pool until we get as many people as possible and as quickly as possible, since the delay has been so long,” said Toi Hutchinson, senior cannabis adviser to Gov. J.B. Pritzker.

She did not say when the lotteries will be held, only that they will follow the final rescoring of applications, which is in its final stages.

Last year, the state received an outpouring of applications for recreational marijuana licenses, reporting that 937 companies submitted 4,518 applications, with 40,000 exhibits to be scored. The licenses were to be awarded more than one year ago, on May 1. New licenses for craft growers, infusers and transporters have also been delayed.

Michel Andre Taylor, majority owner of two companies that applied for retail and craft grower licenses, said that his group of investors spent roughly $200,000 in the effort but remain “seriously cut out.”

“Every action has only benefited the current big cannabis players … while social equity have been given no voice whatsoever.”

Black applicants raised one issue yet to be addressed in legislation. They say the state should let social equity businesses locate within 1,500 feet of existing weed stores, which is prohibited, saying previously licensed medical dispensaries took all the prime spots.

The legislation was discussed Friday at a hearing of the House Executive Committee. It came a day after one of the large multistate operators located in Chicago, Green Thumb Industries, announced it was withdrawing from the Cannabis Business Association of Illinois, known as CBAI.

In a letter to the CBAI, Green Thumb CEO Ben Kovler wrote, “We do not agree with the direction of the association. ... We believe that expanding industry ownership and opportunity to new and diverse entrepreneurs should be CBAI’s top priority, along with addressing the cultivation side of the Industry. We have fundamental issues with several of the association’s self-interested initiatives.”

In response, the CBAI, which represents most of the existing cannabis business license holders in the state, issued a statement that “social equity licenses must be issued as soon as possible, and the General Assembly should focus on ensuring any change to cannabis law puts awards for social equity applicants at the forefront.”

It also called for the state to reimburse social equity applicants for costs associated with the yearlong delay in awarding licenses.

9 films set in Illinois (but not Chicago)

US Navy sailor puts training to work in boat rescue

US Navy sailor puts training to work in boat rescue

A slew of ex-state lawmakers face criminal charges, but critics question whether proposed reforms are enough for Illinois’ ‘very vibrant culture of corruption’

Gov. J.B. Pritzker and Illinois legislators traveled to the metro-east on Friday to talk about a new law designed to improve health-care access for the poor and people of color, including prenatal and childbirth services.

A state audit released earlier this year warned that Illinois Attorney General Kwame Raoul’s office had cybersecurity weaknesses. Three weeks ago, a hack resulted in data being stolen in a ransomware attack.

Gov. J.B. Pritzker’s administration released a revised plan for how to spend the state’s share of a multi-billion dollar Volkswagen settlement, which found the vehicle manufacturer in violation of the federal Clean Air Act.

Unvaccinated travelers heading from Indiana to Chicago will have to quarantine or test negative for COVID-19 starting Friday under the city’s latest update to its emergency travel order.

Gov. J.B. Pritzker is asking lawmakers to eliminate nine tax breaks to balance the fiscal year 2022 budget by the end of May. Lawmakers and business groups argue the tax breaks are good for the economy, especially as the state recovers from the pandemic.

"If I knew then what I know now, I would not have hired her," Gov. J.B. Pritzker said of the former lawmaker who led the state’s Veterans’ Affairs Department during a deadly COVID-19 outbreak at the LaSalle Veterans’ Home.

Illinois Secretary of State Jesse White wants to put a new statue of the Rev. Martin Luther King Jr. at the state Capitol and is pledging his financial support for the project.

Jesse White said he would personally contribute the first $5,000 in funding the new statue that would be situated in a more prominent location on the Capitol grounds. 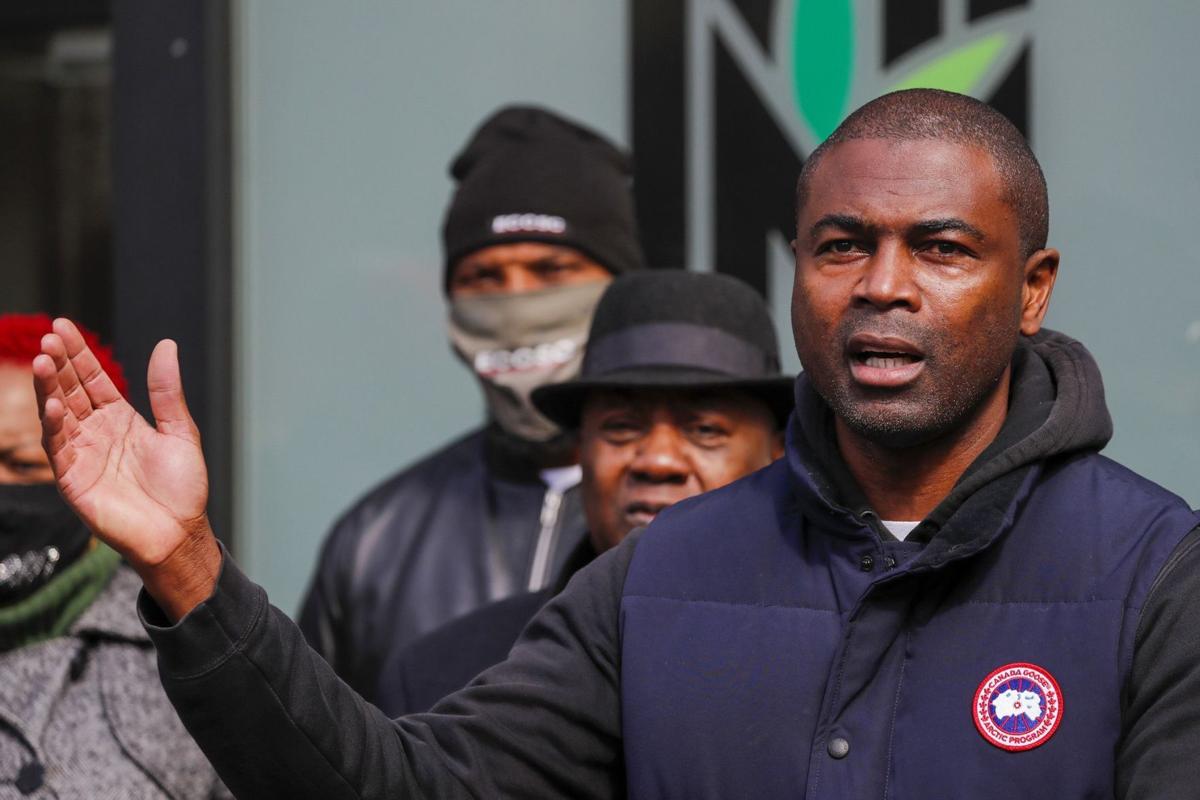 State Rep. La Shawn Ford speaks at a news conference announcing the introduction of House Bill 327 in front of Nature’s Care West Loop Adult Use Dispensary in Chicago on March 16, 2021. 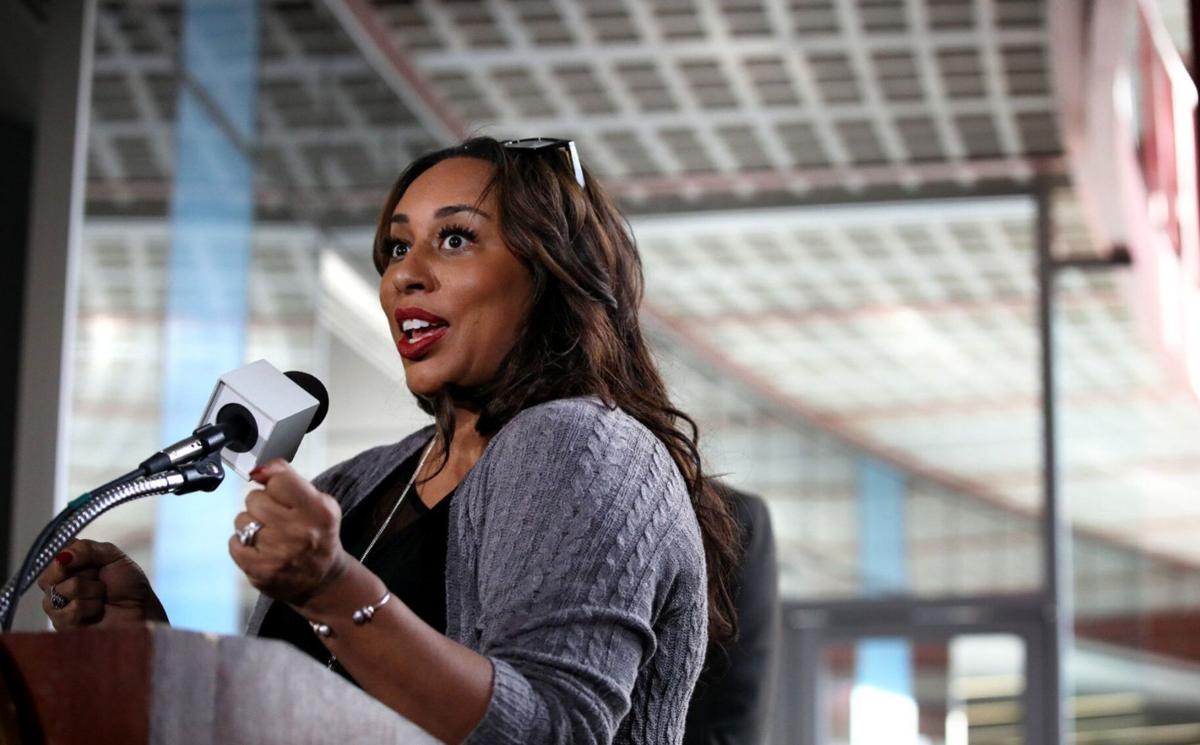