When they met in 2018, Illinois Gov. Jim Edgar found Aurora Mayor Richard Irvin to be “a bright guy” who was “personable” and ultimately left “a favorable impression.”

Irvin, who had just been elected to lead Illinois’ second-largest city the previous year, was participating in the Edgar Fellows program, a five-day executive training designed by the former governor to influence attitudes and foster mutual understanding among emerging Illinois leaders across partisan, ethnic and regional lines.

Irvin so impressed Edgar that he was invited back to speak on a panel of mayors to a future Edgar Fellows class.

But one impression that was not immediately clear to the former Republican governor was that Irvin, who holds a nonpartisan office, was himself a Republican.

“I was impressed with him, but I guess I thought he was a Democrat,” Edgar told me in an interview Tuesday. “And I think that's going to be probably the major challenge for him is to convince Republicans that he's a Republican. Time will tell whether that’s going to happen or not.”

Irvin announced his campaign for the Republican nomination for governor on Monday. He is running as part of a slate of candidates recruited by ex-staffers of former Gov. Bruce Rauner and former Sen. Mark Kirk and expected to be funded by billionaire Ken Griffin and other large donors.

The goal is to beat incumbent Democratic Gov. J.B. Pritzker, a billionaire himself, with Griffin pledging to go “all in” on the effort. Griffin and other major Republican donors had been searching for a Republican candidate to back against Pritzker, believing the existing field of GOP candidates not viable in a general election.

They believe they found their man in Irvin, an Army veteran and former prosecutor who would be the state’s first African American governor, if elected.

A day after his announcement, Irvin released a list of 60 endorsements from various establishment GOP figures in Illinois, including House Minority Leader Jim Durkin and former U.S. Rep. John Shimkus.

However, the take on Irvin and the GOP “slate” that I wanted to hear most was from Edgar, who knows a thing or two about winning elections as a Republican in a “blue” state.

After all, he was the last Republican to be reelected to a second term as governor of Illinois. He also left office extremely popular — so much so that the national party twice attempted to recruit him to run for U.S. Senate.

Edgar’s successor, Republican Gov. George Ryan, on the other hand, opted not to run for reelection and left office under the cloud of scandal, which eventually led to federal corruption charges and a stint in prison.

Republican Gov. Bruce Rauner was defeated by Pritzker in 2018 after four years marred by fights with legislative Democrats and a more than two-year budget impasse.

The party is now shut out of all statewide offices and is toiling away in the superminority in the General Assembly.

So, I called Edgar on Tuesday to ask for his thoughts on Irvin and the “slate,” which includes state Rep. Avery Bourne, R-Morrisonville, for lieutenant governor; state Rep. Tom Demmer, R-Dixon, for treasurer; lawyer Steve Kim for attorney general; former U.S. Attorney John Milhiser for secretary of state; and McHenry County Auditor Shannon Teresi for comptroller.

“It'll be interesting to see how the party receives that,” Edgar told me. “But, the candidates seem like they're legitimate candidates. I mean, I think they bring something to the table and if Griffin's coming through with the money, money is really important in a primary.”

“If he's going to fund these campaigns, that will definitely give them a leg up,” Edgar said. “Now the drawback, though, is people are going to say, 'well, they're all going to be his puppet,' and they're going to have to handle that charge, particularly in the governor's race.”

Irvin’s announcement featured a tough-on-crime message that played up his background as a prosecutor and his record on the issue as mayor of Aurora.

“I’ve seen it up close. Defund the police is dumb, dangerous and it costs lives. And I believe that all lives matter. Every family should be safe,” Irvin said. “My city is now safe, stronger and full of opportunity. I want that for Illinois.”

However, Irvin has pulled Democratic primary ballots in several recent elections and is on tape praising Pritzker’s pandemic response just within the past year. It’s led some to question his conservative bonafides.

In a sense, Irivin is somewhat of a blank slate regardless as running a city is not inherently the most partisan endeavor. There’s no such thing as Republican potholes or Democratic streetlights.

However, this may play to his advantage in a general election, Edgar said, noting the importance of Republicans winning back moderates in the Chicago suburbs.

“I do think that he would make a viable candidate — if he can get past the primary — in the fall,” Edgar said. “The fact that he seems somewhat moderate; he's well funded; he's African American, so perhaps he can pull over some African American votes, which are really the key to the Democrats in Illinois.”

“But the Republicans, I think, have to realize that they've got to win a lot of independents and moderate Republicans back — and maybe what I call 'thoughtful Democrats.' And you can't go too far to the right to do that,” Edgar continued. “That's why Irvin would have a good shot because I think he will undoubtedly be perceived more in the middle than he will be to the far right.”

But even if Irvin emerges from the GOP primary, it will be an uphill climb in the general election, Edgar said.

Though Pritzker’s poll numbers could be better, particularly among independents, Edgar thinks “he is the favorite going into this race” as the incumbent and with his unlimited financial resources. But, Irvin would give Republicans a fighting chance that other candidates would not, he said.

“Again, I still think Pritzker would be the favorite, but I think it would be a race," Edgar said. "Whereas some of these other primary candidates, I'm not sure that it would be viewed as a strong race at that point.”

Edgar acknowledged that “it's tougher than it used to be” to win as a Republican in Illinois, “but it's possible,” he said, if the party can win back voters in the suburbs and exurbs of Chicago who may have been turned off by Rauner and former President Donald Trump.

“If Biden's numbers don't get better, even though he's not on the ballot, it still has an impact on how people vote to some extent,” Edgar said. “In the suburbs, particularly. The suburbs swing more than any other part of the state.”

And, even if Irvin does not win, having a moderate candidate at the top of the ballot may help suburban House and Senate candidates down ballot. And, it could allow other members of the “slate” an opportunity to win.

Edgar, a former secretary of state himself, said “an incumbent has a huge advantage in that office. So not having an incumbent does make it a more level playing field.”

“That, I think, could be a very interesting race, it could be a close race,” Edgar said. “And this is the chance for the Republicans to get that office. Historically that's been a good office to have … It's been a good stepping stone.”

Undoubtedly, the Republican Party has changed since Edgar, a pro-choice moderate, held office.

Still, he’s the most successful living former Republican statewide official. At the very least, his two cents is worth listening to as Republicans decide who they may support in the June primary, which is only 160 days away.

This article has been updated to include the name of state Rep. Dan Brady, R-Bloomington, whose candidacy for secretary of state was omitted in an earlier version.

Top 10 stories in Illinois government from 2021

Speaker Madigan out, Speaker Welch in

Illinois at center of January 6

Former U.S. Rep. Tim Johnson, R-Urbana, who represented swaths of east-central Illinois for more than a decade, died Monday evening. He was 75.

"It is a profound form of love ... to sacrifice one's life in order to save the life of a complete stranger."

"Women are under siege. Basic rights to privacy, to healthcare, to the rights of women to control their own bodies, are about to be stripped away," Pritzker said.

Watch now: Durbin to Putin: 'You have disgraced yourself'

"You will not erase Ukraine," the Illinois Democrat said, in a message aimed at the Russian president.

Kankakee family welcomed President Joe Biden to their farm, but first, some soybeans had to be planted

Jeff O’Connor was up at 4 a.m. Wednesday, the day the president of the United States would be visiting his farm. “It’s planting season,” he had told his wife, Gina, when she gently chided him about worrying whether the visit would take up too much of the day during such a busy time on the farm.

Irvin has largely stayed away from earned media and in-person forums with his fellow candidates, instead relying on a deluge of television and digital ads along with mailers to get his message out.

In Kankakee visit, Biden spotlights role of US farms

Biden toured the 800-acre O’Connor Farms in Illinois with its owners, Jeff and Gina O’Connor.

U.S. Rep. Michael Quigley on Tuesday endorsed Alexi Giannoulias in a highly contentious race for the Democratic nomination for Illinois secretary of state.

For those polled who have picked a candidate, Aurora Mayor Richard Irvin had the lead, followed by state Sen. Darren Bailey. 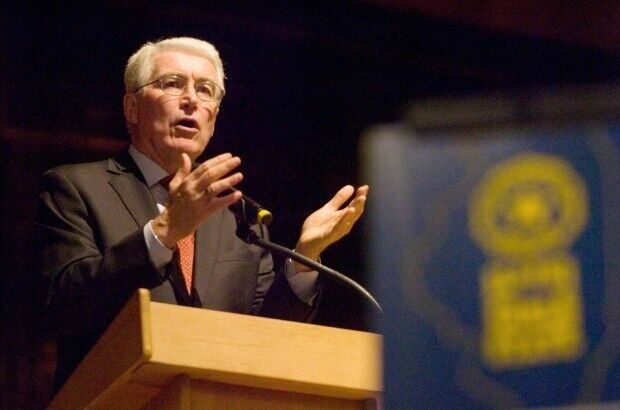 Former Illinois Gov. Jim Edgar speaks during an event in Charleston in 2011. 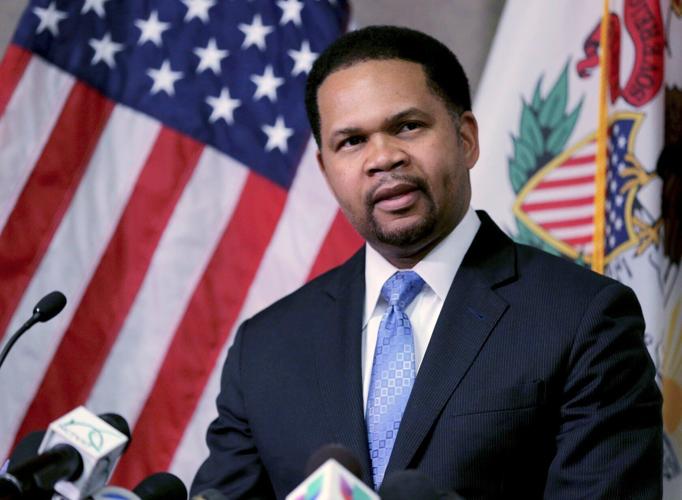 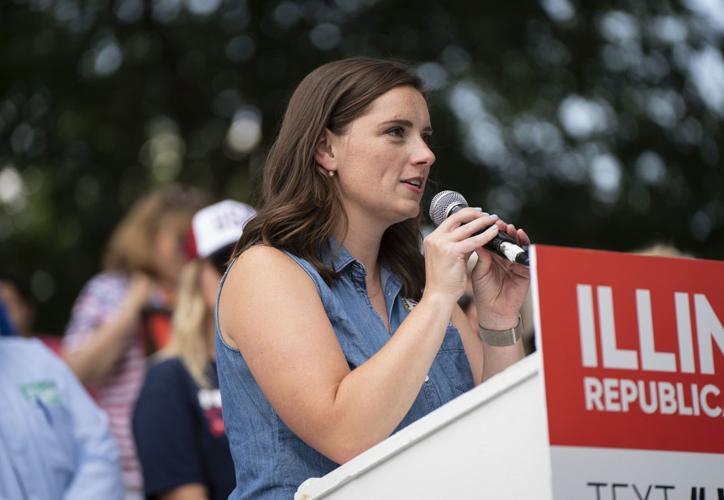 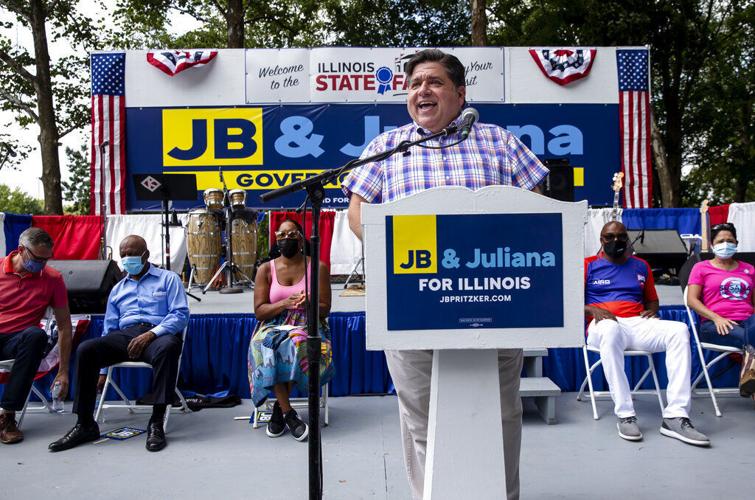 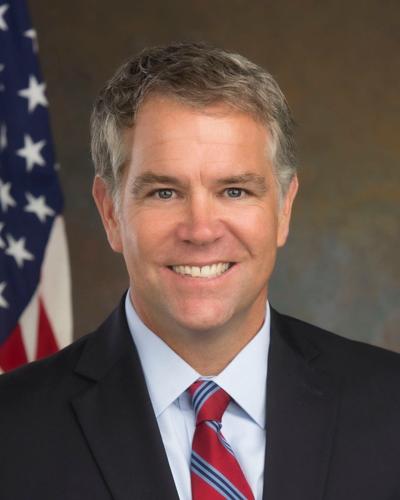