From the outside, there’s nothing to suggest the fire station often is left unstaffed, or that it is used for maintenance rather than as a base for firefighters and paramedics to go out on calls.

That’s one of myriad reasons, experts said, that the person who left a baby boy in a duffel bag outside a Near North fire station around 5 a.m. in the 1000 block of North Orleans Street Saturday should have tried the buzzer and made sure to speak with someone inside. It’s possible doing so could have saved the infant’s life and, ironically, would have meant a “no questions asked” policy. The biological parents now potentially face arrest and charges for abandoning the baby, officials said.

“There is no risk to the person being identified or questioned. You can knock on the door, ring the bell, get our attention, we will take the child from you, thank you and you’re on your way,” said Larry Langford, a Chicago Fire Department spokesman.

Illinois’ Safe Haven Law offers new parents the option to safely and legally give up their child. Under the 20-year-old law, a baby up to 30 days old may be left at a hospital, emergency care facility, police station or firehouse without the parents facing questions or prosecution.

If they had tried to reach someone inside, Langford said, it’s likely they would quickly have learned the difference between a firehouse, where full-time firefighters work, and a fire station with minimal staffing — where the baby was left.

“This is a building that’s used for air maintenance and air supply,” Langford explained. “This is not a regular-man firehouse, and often there is nobody there at all.”

Langford explained the crews at the fire station where the baby was left go out to service and exchange air tanks at fire companies all over the city, so they often can be out for an extended period of time as they go around the city dropping off air tanks or picking air tanks up.

“It is imperative that they have contact with someone at the firehouse. Under no circumstances do we want people to leave children outside. And because of the way the Safe Haven Law is written, you may hand the child directly to a staff member or Fire Department member — they won’t ask for your name, they won’t ask for identification, they won’t question you at all, which is far better than leaving the child outside.”

Dawn Geras, founder and executive director of the Save Abandoned Babies Foundation, said she isn’t sure what the disconnect was in this particular case, but she echoed Langford’s sentiments, saying: “They could have rung the doorbell or called to say they left a baby outside.”

That’s why Geras was both disturbed and puzzled at the decision to leave the baby outside, particularly in winter. She said she believes that, although the Safe Haven Law has been in effect for 20 years, there are still significant gaps in people’s understanding of the law and its protections — if they’re even aware it exists.

“There is a toll-free number that people can go to if they have a question about what to do or call for information ahead of time. That number is 888-510-2229,” Geras said. “The general public can go to our website where there is a lot of information and materials that can be ordered for free for the community to help us distribute lifesaving information such as brochures and posters they can bring to where they work, where they worship, where they get their nails done, anywhere and everywhere.”

As of last year, 143 babies had been taken to a Safe Haven since the law was passed in 2001, according to the Save Abandoned Babies Foundation website. During the same time, 87 babies were found illegally abandoned and 51% of those newborns died.

“Illegal abandonment has decreased over the years, but one baby death like this is way too many,” Geras said. “People don’t think about (the law) until something like this happens.”

Once a baby is left at a Safe Haven location, the newborn will be taken to a hospital to be evaluated. Within 12 hours, either the birth parent or, upon transport from police or a firehouse, the hospital will report relinquishment to the state’s Department of Children and Family Services, according to the foundation.

Once DCFS confirms that the newborn is not missing, he or she will be placed with a licensed Illinois adoption agency. Birth parents have as many as 60 days to change their minds, but after that, their parental rights will be permanently terminated.

For birth parents, resources for postpartum care also are provided.

“They can realize they can take responsible, loving actions for themselves and the baby,” Geras said.

At least two other babies were found abandoned in Chicago in recent years, each sparking the same mixture of confusion and outrage. Fortunately, both survived, even though neither was turned over safely or properly under the Safe Haven Act.

In May 2019, a baby was found, umbilical cord still attached, inside a canvas tote on top of a garbage can in an alley in the 1700 block of North Keystone Avenue Hermosa, Geras and Chicago police said at the time.

The boy was screaming loudly and frequently enough that a mother and daughter found him and walked to a firehouse — right around the corner, at 1747 N. Pulaski Road.

“The fireman on watch was trying to figure out what they were talking about and they handed him a shopping bag,” Langford told the Tribune at the time. “He looked inside and was shocked to find a baby.”

The boy ultimately survived thanks to heroic efforts by the family who found him, firefighters, paramedics and the team of doctors and nurses at Lurie Children’s Hospital; he was named after a longtime paramedic supervisor and a police officer who cleared a path for the ambulance to the hospital.

In August 2021, another baby was found stuffed in a dresser drawer near garbage bins — on the day and close to the time when trash pickup was due, although it wasn’t clear if the dresser would have been hauled off by city workers.

Paramedics were called about 8 a.m. Aug. 10 to the 2300 block of North Oak Park Avenue in the Montclare neighborhood by a person who located the newborn inside the drawer of a dresser, Langford said.

“It’s a good thing somebody came by. It’s hot out there, it could’ve ended differently,” he said at the time. “But it’s all seemingly worked out.” 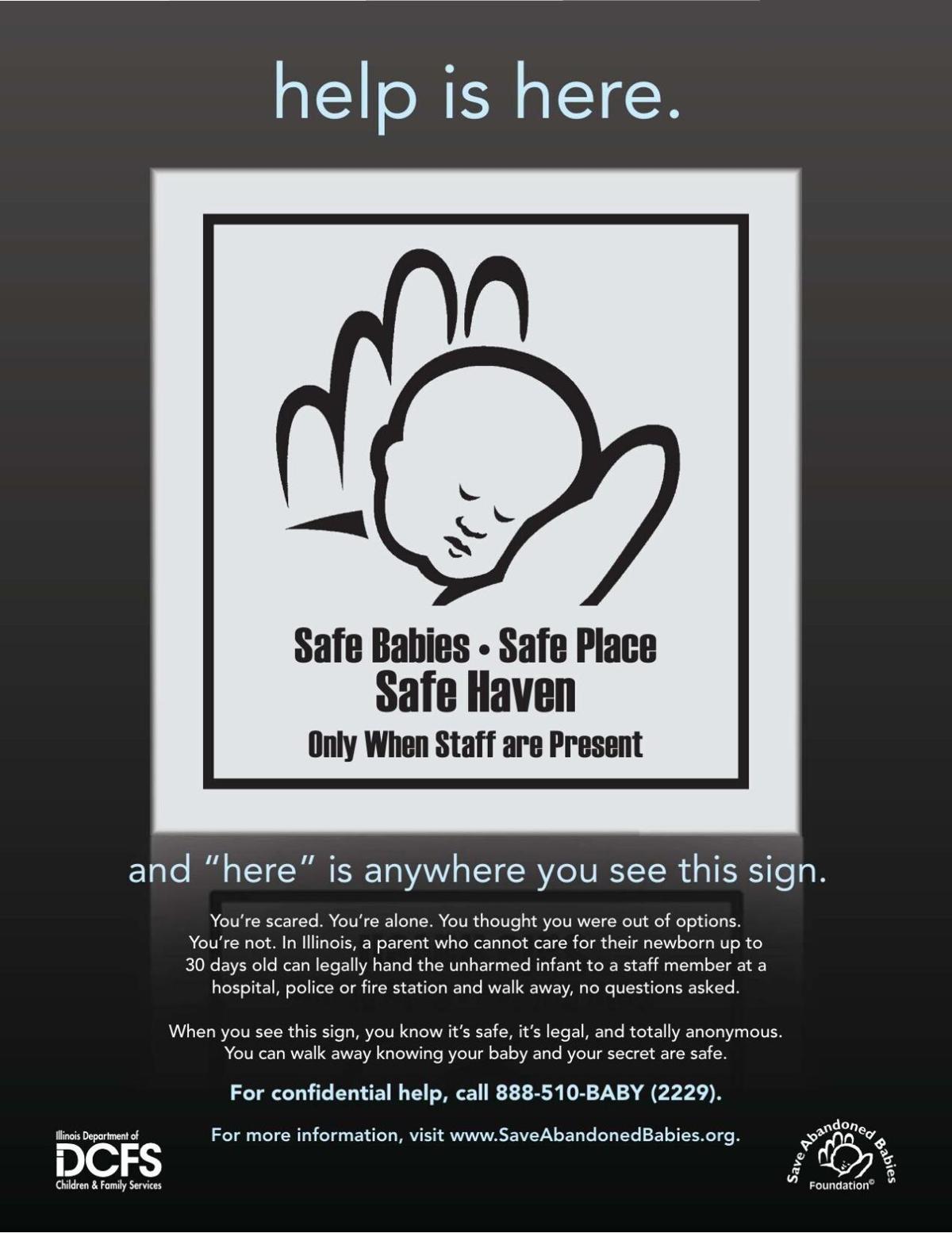 In both cases, law enforcement searched for the biological parents who abandoned the babies without apparent regard for their safety. Geras said those are precisely the types of scenarios the 2001 law was intended to eliminate.

“How tragically sad. And unnecessary,” Geras wrote in an email after the 2021 case made headlines across the city. “If these parents had known to use the Baby Safe Haven law the police would not now be trying to track them down to press charges.”

For more information about the Safe Haven Law or the Save Abandoned Babies Foundation visit saveabandonedbabies.org or text SAFEHAVEN to 313131.

Tow truck driver ran down innocent man while attempting to kill another out of jealousy, Indiana court records state

If a person at the casino offers to give you part of his or her slot machine jackpot if you'll do the paperwork required to claim it, it's not only a bad idea to say yes, it's also a crime.

What happened that day has become a viral sensation on TikTok, leading to countless death threats against the store owners, and even their dogs. The Fox Club shuttered its doors, and locked down its social media accounts.

Illinois fuel retailers argued in a lawsuit filed Thursday that a requirement to post signs alerting consumers about a six-month freeze in the state motor-fuel tax unconstitutionally compels them to promote Gov. J.B. Pritzker's reelection campaign.

A tornado that produced winds of up to 115 mph swept through two southeastern Illinois communities on Thursday, causing damage but no injuries before dissipating in Indiana, the National Weather Service has confirmed.

Normal native Leah Marlene is set to make a return to her hometown Tuesday as part of filming for the “American Idol” finale.

"If you told me a year ago that I'd be looking out at a sea of thousands of people right now ... I would have never, in a trillion, billion, kajillion years, believed you."

The 13-year-old who authorities said was involved in a carjacking was shot and seriously wounded as he ran from Chicago police officers in the 800 block of North Cicero Avenue in the South Austin neighborhood Wednesday night.

As the man attacking the officer repositioned himself to take on two people, William Cassoday said, he turned Christopher Delgado's body and from behind, placed him in what is known as a "rear naked choke."