SPRINGFIELD — Gov. JB Pritzker spent much of the day Wednesday in downstate Illinois, where he observed flood preparations along the Illinois River in Meredosia before heading to East St. Louis. There, officials are preparing to launch a massive contact-tracing effort to control the spread of COVID-19.

About 60 Illinois National Guard soldiers have been deployed to Meredosia, about 60 miles west of Springfield, to assist local emergency management officials in stacking an estimated 150,000 sandbags to shore up a levee that protects the town of about 980 residents.

Morgan and Pike counties were under flood warnings Wednesday as the river there reached a height of 25.3 feet, which is more than 8 feet above flood stage.

“National Weather Service projections had indicated massive potential flooding in the area,” Pritzker said during his daily briefing, this time from the Jackie Joyner-Kersee Community Center in East St. Louis. “This work has likely saved many lives and prevented hardship for hundreds more.”

Those operations to address one natural disaster took place as Illinois passed a grim milestone in the battle against the COVID-19 pandemic. Pritzker announced Wednesday that 160 additional virus-related deaths had been reported over the previous 24 hours, bring the statewide total so far to 5,083.

“These are real people whose lives came to an end because of this pandemic,” he said. “They are grandparents and uncles and aunts and parents, cousins, children, friends. They had whole lives that were cut short because COVID-19 knows no boundaries and only seeks to destroy.”

The Illinois Department of Public Health reported 1,111 new confirmed cases of the disease on Wednesday, a number that likely includes a number of positive tests that came in after the holiday weekend. That represented just 6.47 percent of the 17,179 tests that were recorded.

The rolling seven-day average positivity rate for May 20-26 was 8.6 percent, well below the 20 percent benchmark that public health officials say is needed to enter the next phase of the reopening plan scheduled for Friday.

All told, there have been 114,306 confirmed cases in Illinois since the pandemic first hit the state.

In East St. Louis, Pritzker joined city and county officials to highlight the upcoming contact tracing effort. That’s a project during which officials attempt to trace all other individuals who have been in recent contact with someone who tested positive for COVID-19 so they can take precautions to prevent spreading it to anyone else.

Although IDPH has engaged in contact-tracing for years with other disease outbreaks, particularly HIV, Pritzker said, the size and scope of the COVID-19 outbreak will require hiring thousands of additional people in all parts of the state.

What you should know as Illinois readies to enter ‘Recovery’ phase

St. Clair County is one of two counties, along with Lake County north of Chicago, chosen to operate a pilot program because they have large numbers of people who are especially vulnerable to developing complications from the disease.

In the East St. Louis area, Pritzker said IDPH is partnering with the St. Clair County Health Department and the East Side Health District, which serves townships in the county outside the city of East St. Louis, to operate the program.

Golfers in Illinois allowed to play in foursomes, ride in carts beginning Friday

Elizabeth Patton-Whiteside, administrator of the East Side Health District, called it a “monumental task” to control the spread of COVID-19 in communities with large black and Latinx populations.

“Everyone is aware that the black and Latino adults are far more likely to experience serious illness and death from COVID-19,” she said. “Underlying health conditions such as diabetes, hypertension and obesity are some of the risk factors” that disproportionately affect those populations and are associated with complications.

In addition, Patton-Whiteside said she has had to battle a number of false perceptions in the community that have deterred many people from even being tested for the disease, such as the fear that the test will hurt or that police who are present might be looking for people with outstanding warrants.

“The test does not hurt. It’s just a swab in the nose,” she said. “The police, they’re here for you to help with crowd control. Nobody is trying to run anybody’s license plates and look anybody up.”

Pritzker said the state is tracing about 30 percent of those who have been in contact with people who’ve tested positive, but the goal is to reach more than 60 percent.

“It’s going to take us weeks and weeks. I can’t tell you how long,” he said. “Some people think it will take through August to do it. I’m hoping that we’ll be able to do it much faster than that. But as fast as we can we’re getting dollars out to the counties so that they can do the hiring that they need.”

As Illinois gradually reopens, will you be wearing a mask?

Three months ago, it would have been unthinkable for most Americans to go out in public wearing surgical masks, homemade face coverings or ban…

The Edwardsville-Glen Carbon Chamber of Commerce has filed a suit in Madison County Circuit Court claiming Gov. J.B. Pritzker does not have the authority to close down businesses because he issued the order under a section of law that refers to a "disaster." 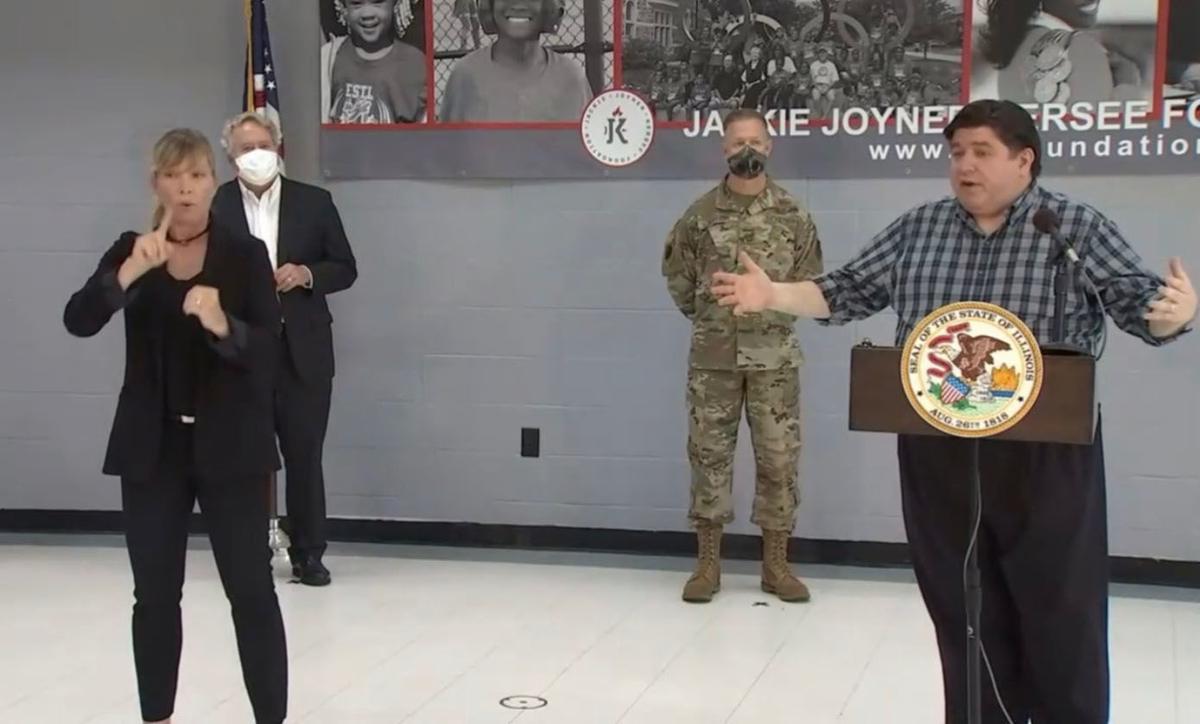 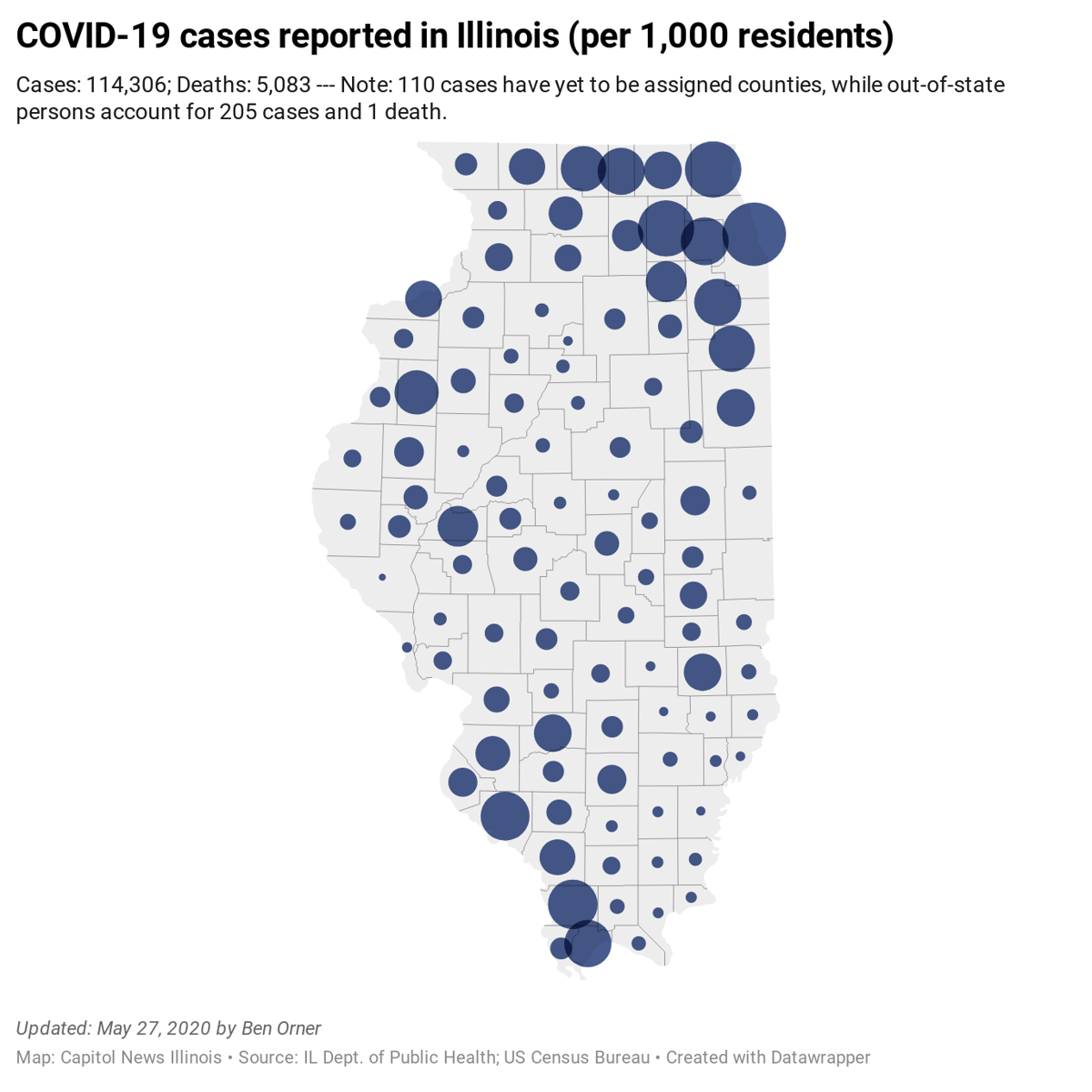 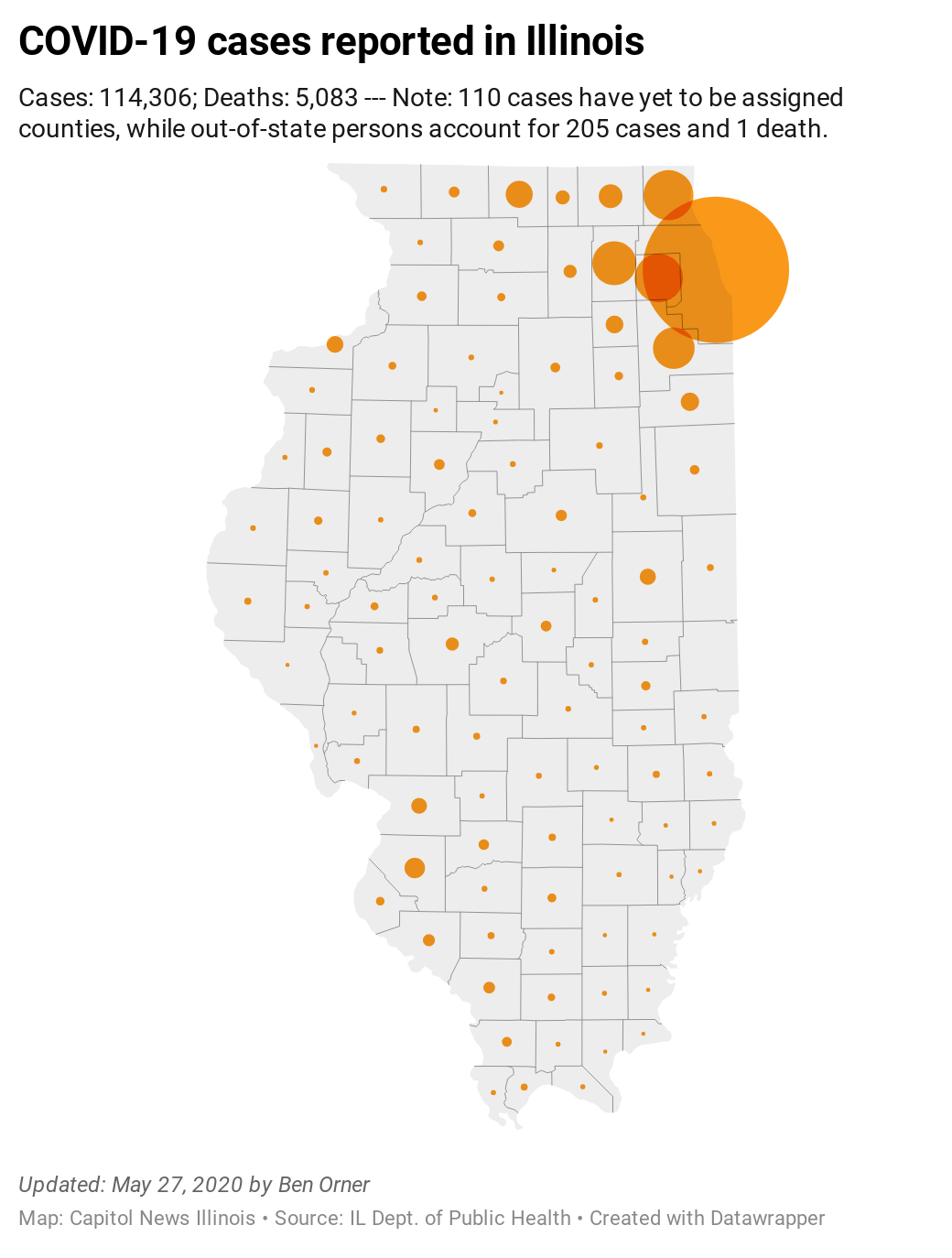