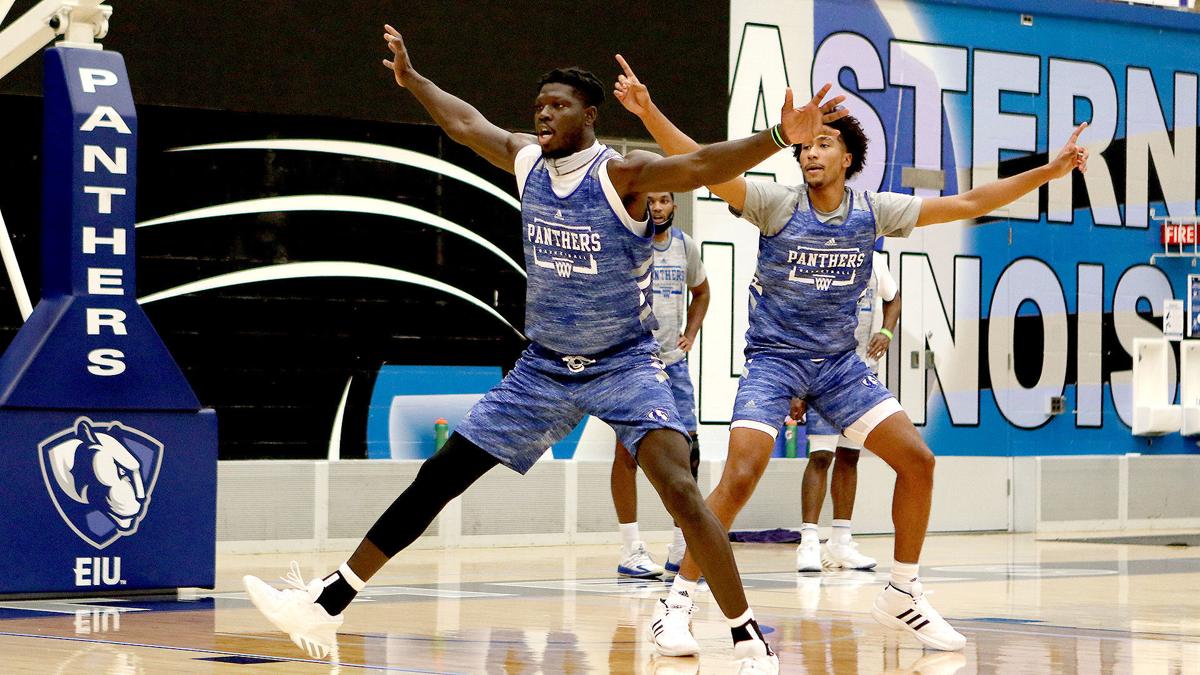 Eastern Illinois University's Madani Diarra works at a recent Panthers practice. Diarra, a native of Mali, is adjusting to life in the U.S. and hopes to make his mark on the EIU program. 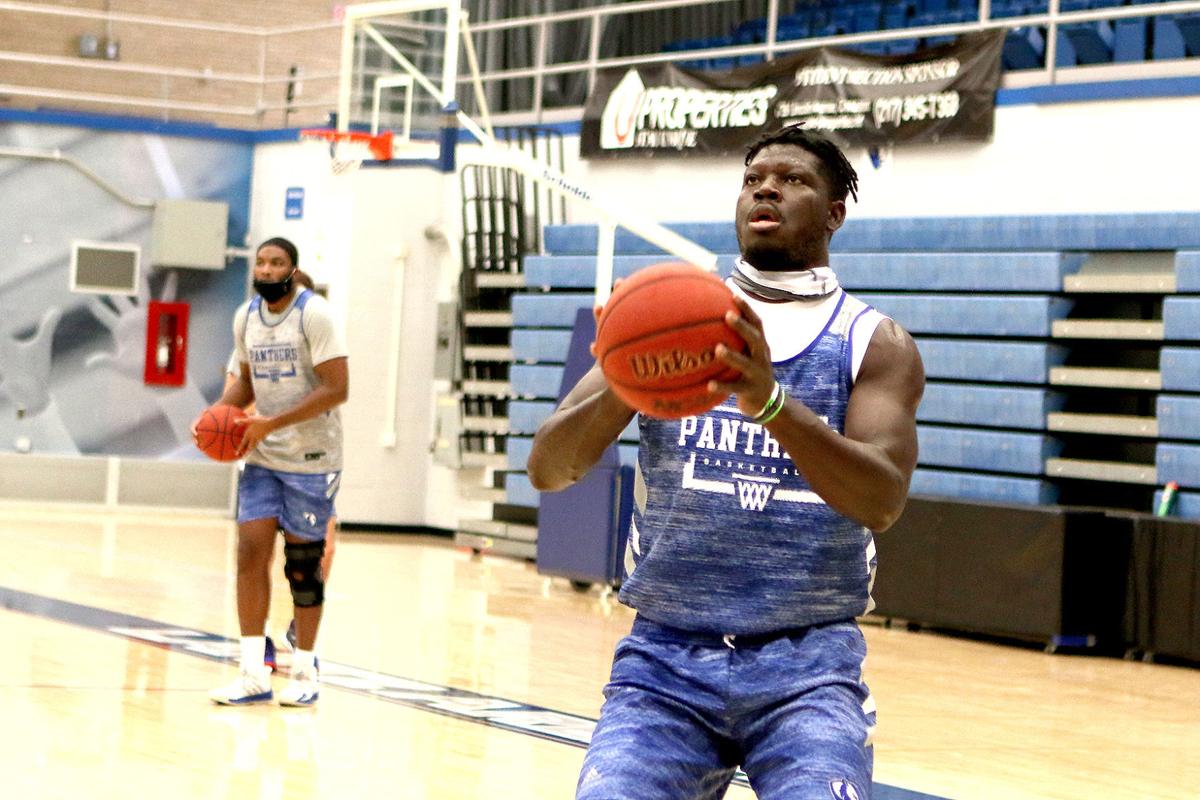 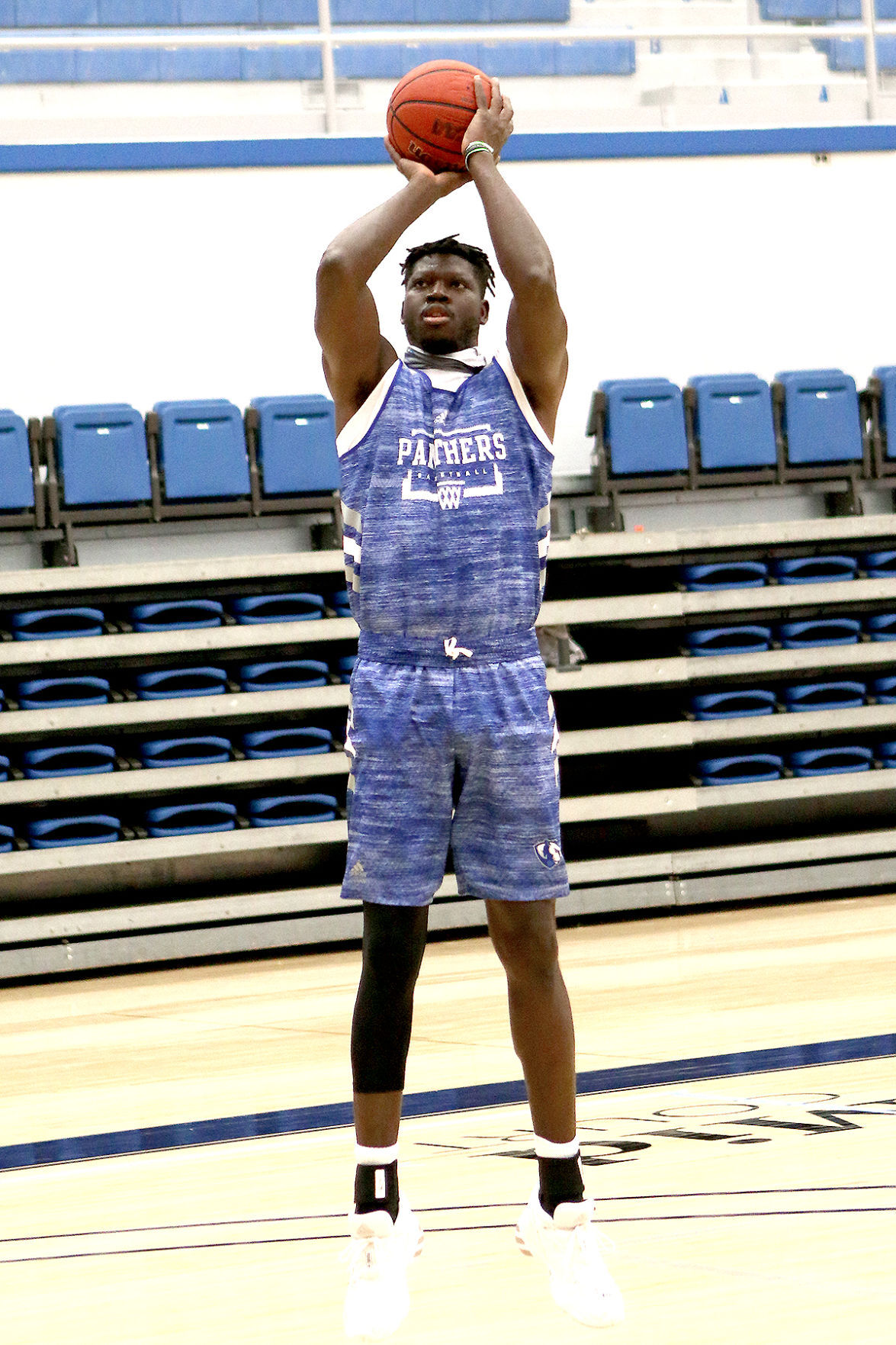 Madani Diarra takes a shot at an Eastern Illinois practice. 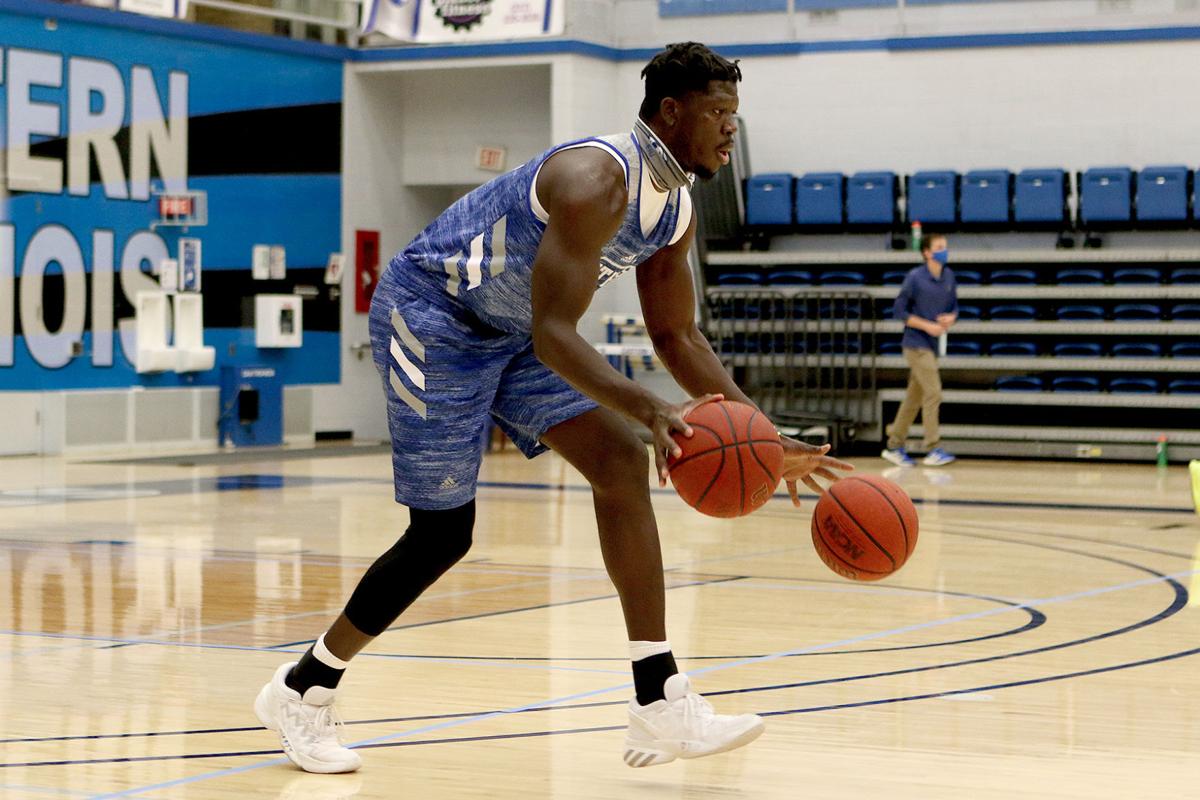 Madani Diarra has had to make several adjustments throughout his young life to land on the campus of Eastern Illinois University as a member of the men’s basketball team.

Diarra was born in the West African nation of Mali and like many young people in his nation, basketball was not his first sport.

“I started playing basketball about six years ago,” said the 6-foot-10 Diarra. “My first sport was soccer and then I started growing really fast, so my friends told me to stop playing soccer with them and try other sports. My mom put me in basketball when I was 13 or 14, and when I turned 16 I left Mali for the United States.”

Since a young age he always knew that he wanted to leave his native country, a place that during his lifetime has seen several instances of unrest. The middle of three children, his parents have always been supportive of him and his siblings.

“Since I was young I would tell my parents that I was not going to end up in Mali," he said. "I don’t know why, but every day I told them. My parents gave me and my siblings the freedom to do what we wanted to do with our lives. Since I had the opportunity to come to the United States, they supported me.”

His younger brother is 16 and just started playing basketball. His older sister is married with children. Both still live in Mali.

Diarra, based on his athletic skill, was given the opportunity to come to United States. He was offered a chance to play at St. Benedict’s Prep, a boys prep school in Newark, New Jersey.

For Diarra the adjustment may not have been as dramatic as one would think. The school, while primarily serving the local community, does provide an international flair with students from 23 different countries.

“It’s known for that," he said. "St. Benedict’s has a lot of international players. It has lots of soccer players and basketball players from around the world. It’s known as an international school. They offer scholarships to kids in other countries to come pursue their dreams in the US.”

While the opportunity provided itself, Diarra still had to make the adjustment of becoming comfortable with English, the third language that he speaks. His other two are French (the official language of Mali) and Bambara (one of 40 African dialects spoken in the nation, but used by nearly 80 percent of the nation).

While a member of St. Benedict’s, another opportunity arose for Diarra as NBA All-Star Stephen Curry appreciated the motto of St. Benedict’s, “What Hurts My Brother, Hurts Me,” and decided to produce a 12-part documentary series on the St. Benedict program for the online platform Quibi.

Diarra is one of the featured players in the series along with current Xavier guard C.J. Wilcher and recent MAAC Rookie of the Year Aaron Estrada (then at St. Peter’s, now a transfer at Oregon).

“It was a great experience," he said. "One of the best of my life. To be able to be on camera for 9 to 10 months and see myself on TV, it’s a blessing. If you would have ever told me I could be on a TV series and it be produced by Stephen Curry, I wouldn’t have believed you.”

For Diarra, his role in the series focused on rehab, as he was limited on the court during his senior season at St. Benedict’s due to a knee injury he was recovering from. Still that didn’t limit his chances at playing at a Division I school — seven or eight schools offered Diarra a scholarship. In the end, he chose to start his career at Saint Louis University.

Still in the midst of recovery from the injury, Diarra appeared in only four games off the bench as a freshman for a team that won 23 games. For whatever reason, it was not the right fit for Diarra and he chose to make another adjustment in his life and place his name, like many other college athletes, in the NCAA transfer portal. That opened the door for his path to EIU.

“Coach Spoon (Jay Spoonhour) is a great guy," he said. "When I put my name in the portal he was the first one calling me and checking in on me. He asked me where I was comfortable at and what I needed to work on in my game, in order to be a great player in the future. I saw that Eastern was in the middle of a small town and I love a town like that. I have been in a big city before, so I wanted to learn some new experiences. I love how Coach Spoon coaches and I think he can really help me.”

Most players that transfer can quickly settle in to meet and bond with their new coaches and teammates. In the midst of a national pandemic, that was not the case for Diarra. So in the early summer he moved the two hours east on Interstate 70 from St. Louis to Charleston, again making adjustments in his life — being the only men’s basketball player in town.

“It was kind of good, but I was a little bit home sick missing some of my friends," he said. "I had the opportunity to work on myself a lot – going running, work outs by myself and some meditation time to myself. It made me really learn how to manage myself. It was the same at St. Benedict’s. I was in a dorm there for three years, so I’m used to being by myself and being alone on the weekends or break when everybody goes home.”

Some of the things Diarra worked on in addition to his mental and physical self were his basketball skills. Still in what some might consider the infancy stages of playing basketball, Diarra knew he had things to work on in his game.

“Right now my strong things are my defense and rebounding," he said. "I’m also strong at finishing free throws. For me I know I need to work on my soft touches. I had been missing a lot of easy soft touches that I should make, so I’m working more on those.”

As Diarra works on his game, one thing he currently doesn’t have control over is when he will get to touch the court for the Panthers. As a transfer from one NCAA Division I school to another, he must sit out a season. He has worked with the EIU Athletic Department for a waiver to get a chance to play this season.

“I’m very excited to play because I missed almost two years of basketball," he said. "I want to play this year because I think there is a good chance I could help the team and help us reach our goals. I hope that they clear me to play because I don’t want to sit out and watch others playing this season.”

As mentioned, Diarra and a couple of other current college players were part of the Stephen Curry series produced for Quibi. With Diarra being one of the featured players in the series, he was recently covered for a follow up story with the YouTube production, No Days Off.

Despite the active part in two series, it wasn’t until an appearance on the Kelly Clarkson show in early October that Diarra and Wilcher actually got to meet Curry.

“It was pretty exciting to me," he said. "One of my dreams is to be an NBA player one day. It gave me more energy to chase my dream and try to maybe one day play with him or play against him on the same court. He is one of my top five players in the NBA right now.” 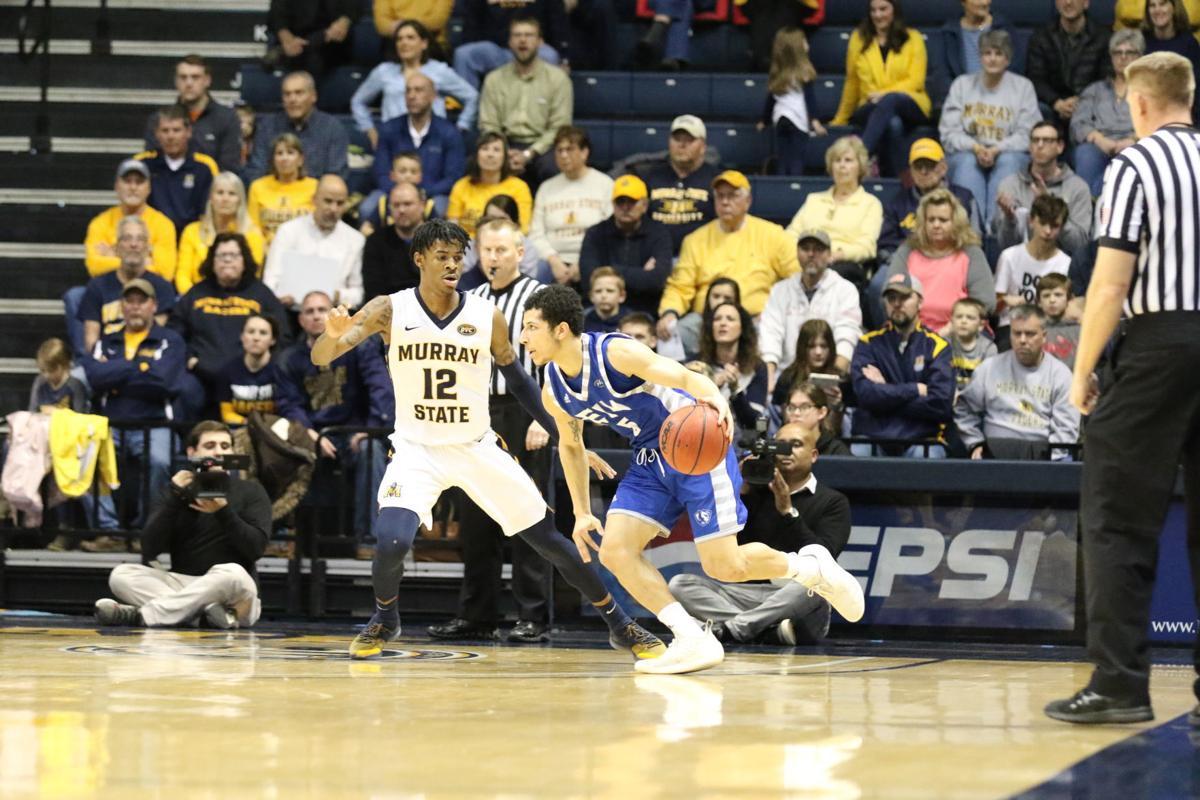 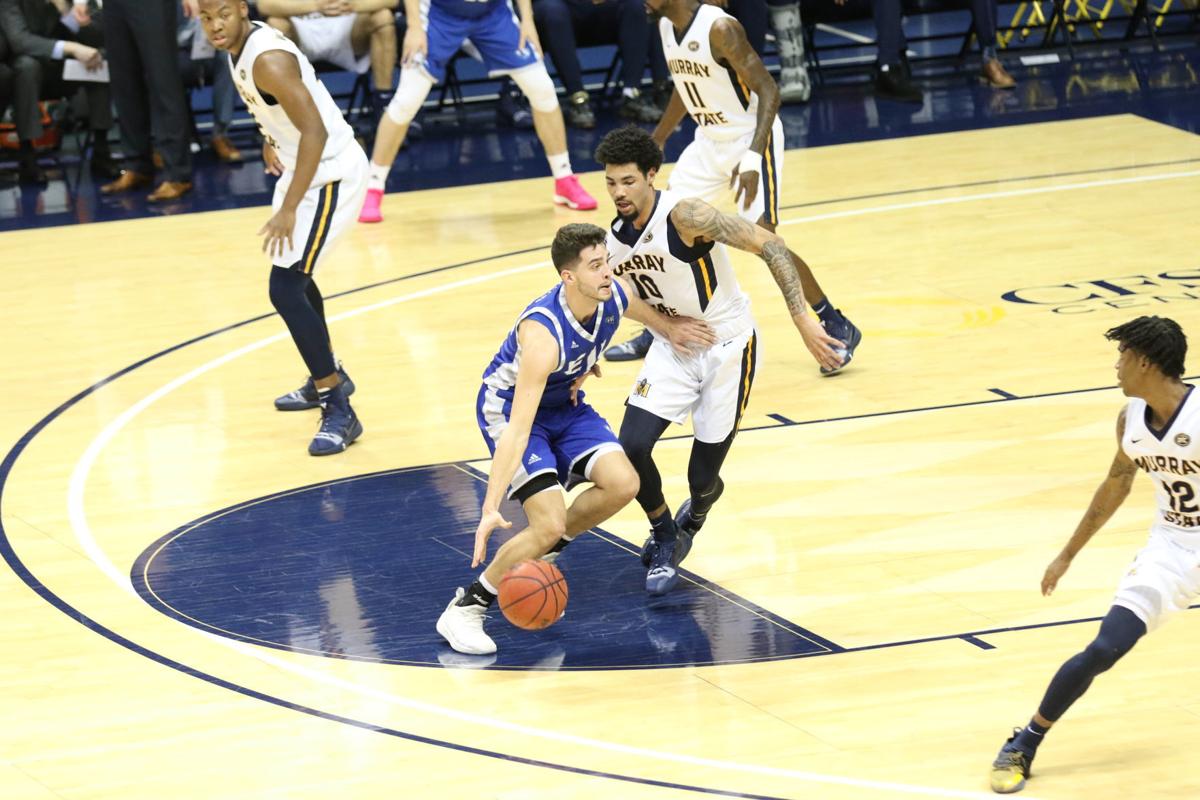 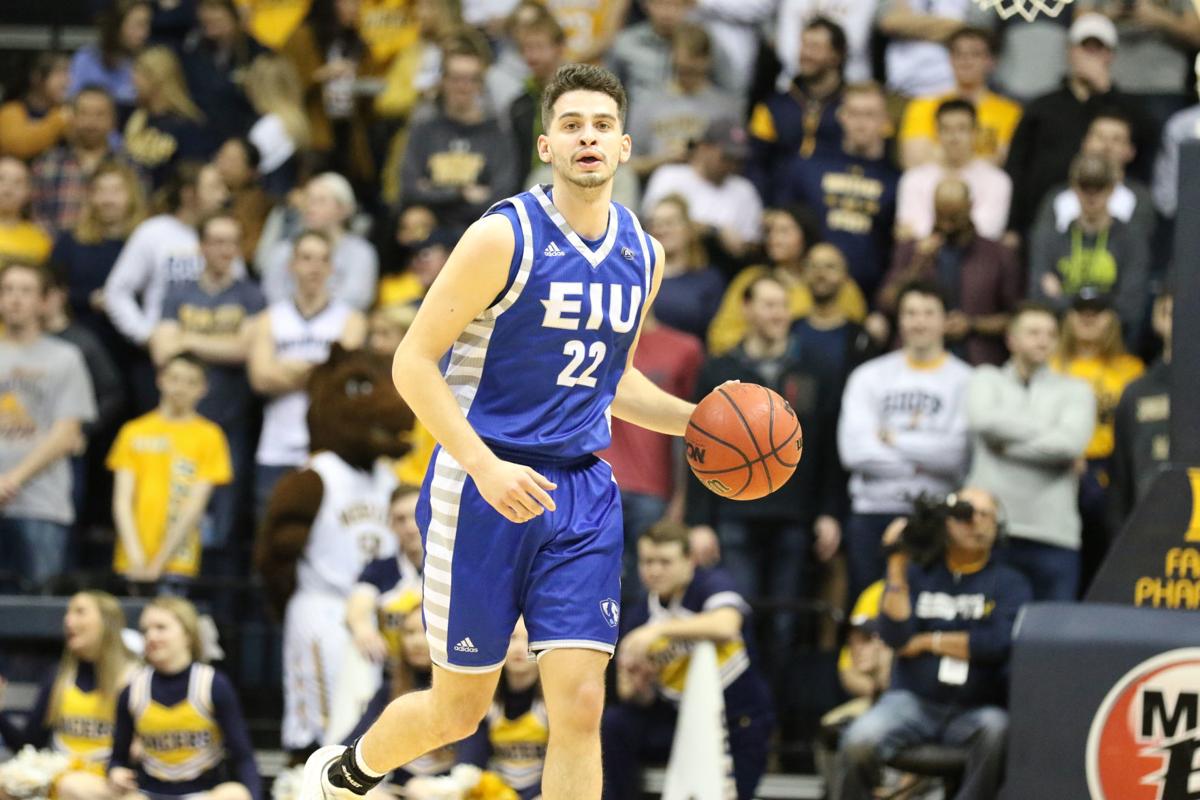 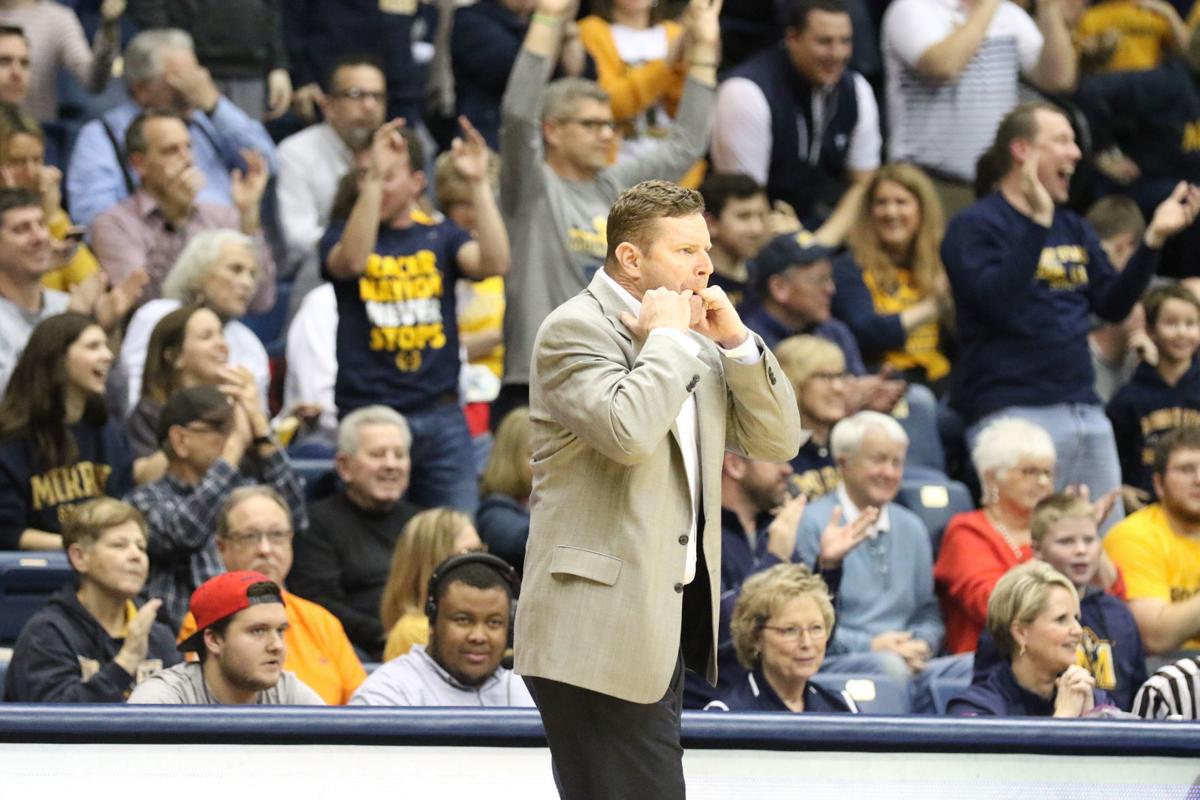 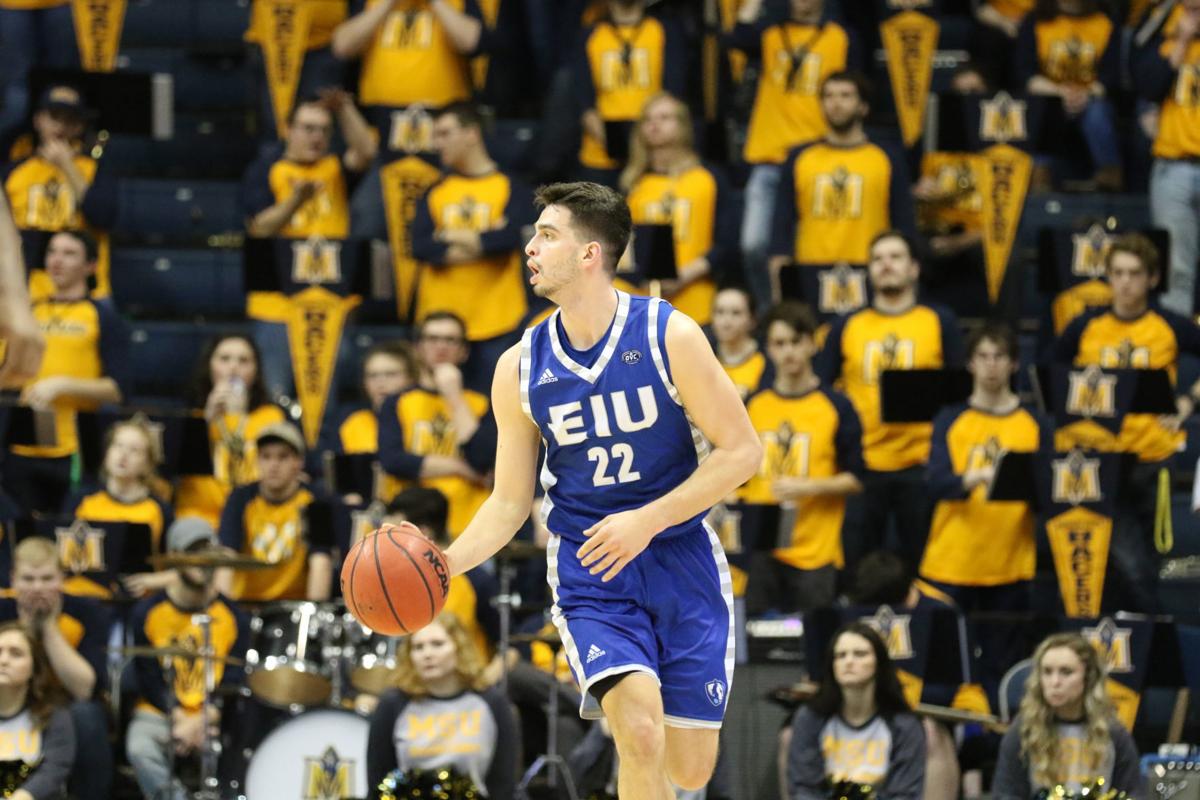 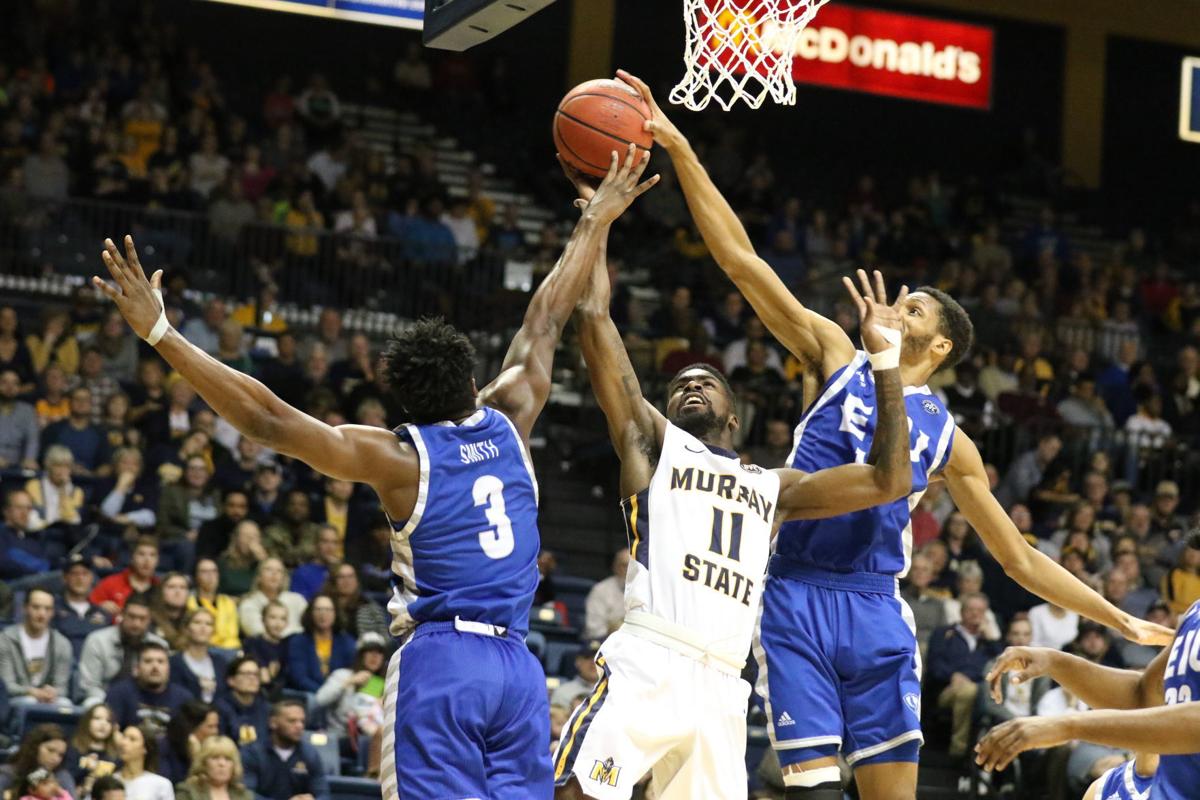 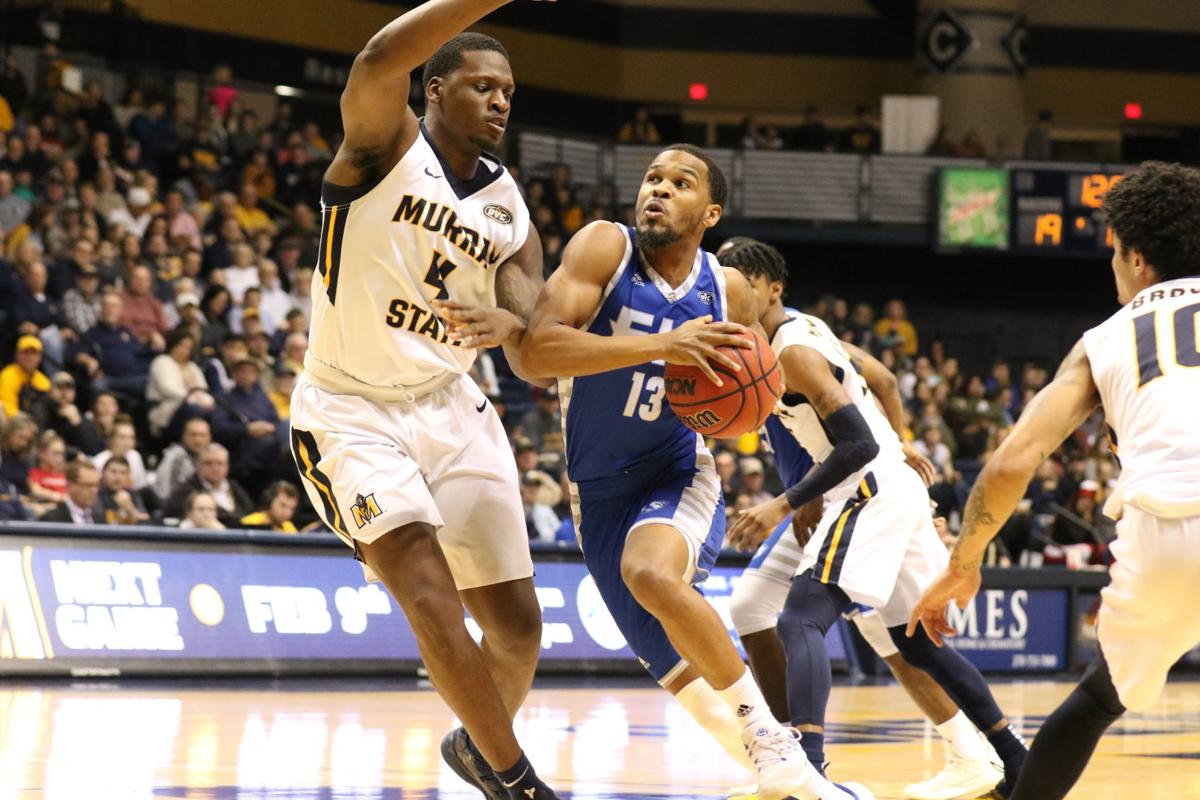 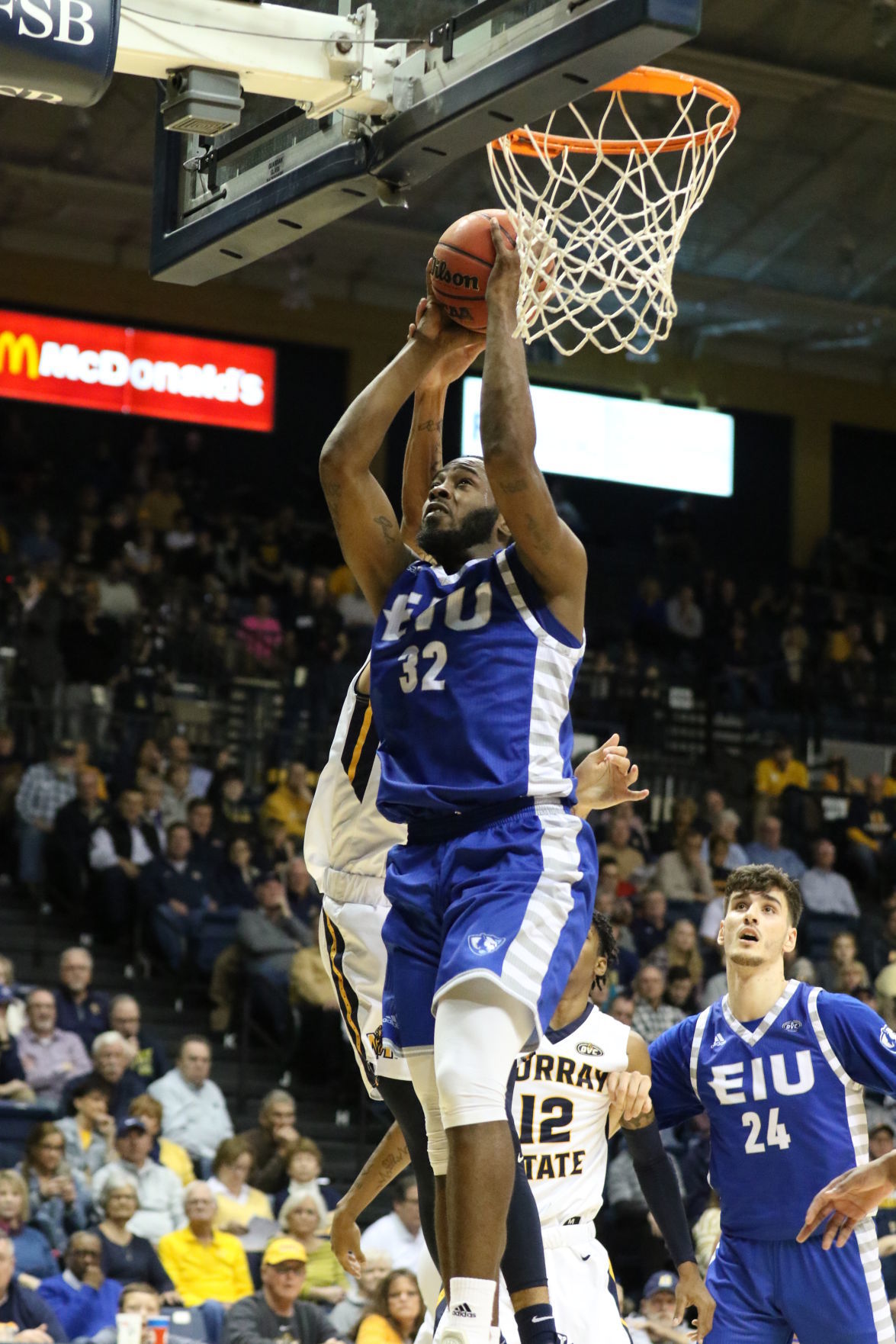 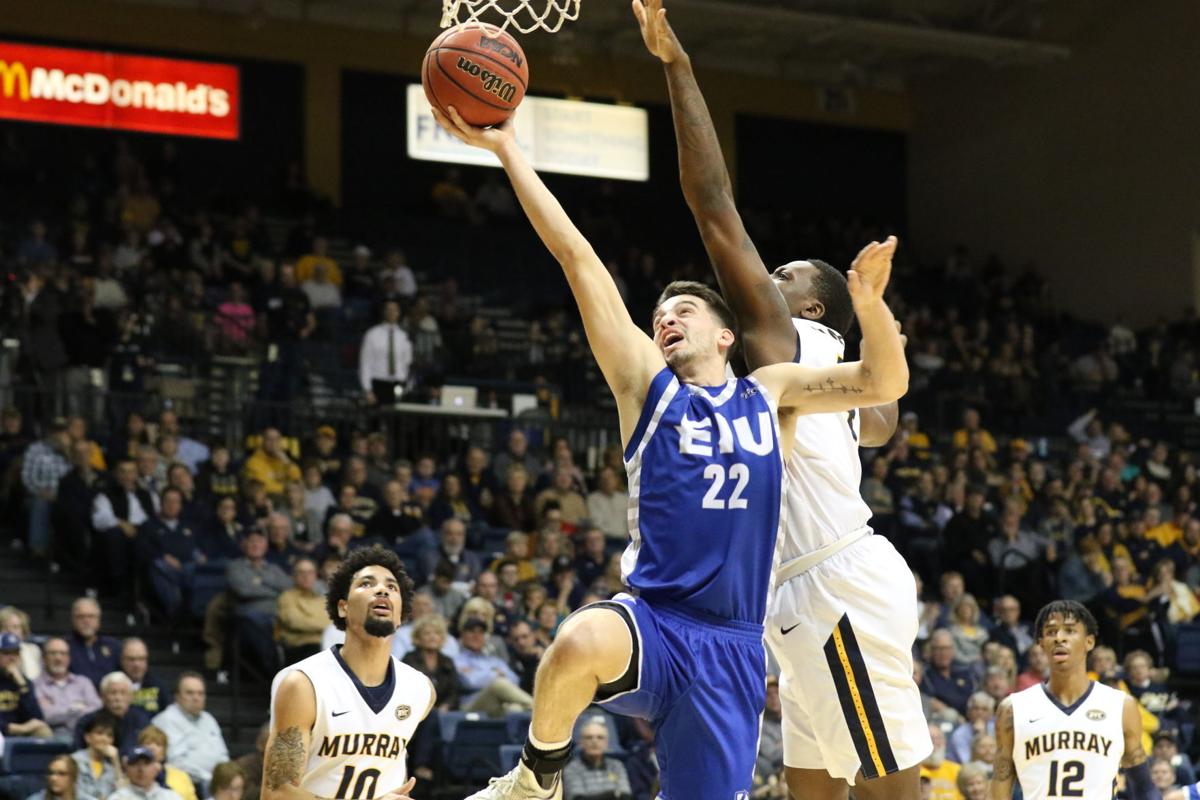 Josiah Wallace and the Eastern Illinois men's basketball team opens the season at No. 7 Wisconsin.

Josiah Wallace and the Eastern Illinois men's basketball team opens the season at No. 7 Wisconsin.

Like many colleges and universities across the country, the nickname for Eastern Illinois intercollegiate teams was something that was develop…

Before the first syringes and swabs were opened Wednesday morning, there was a long line of people ready to take advantage of a chance to address two current health concerns.

As the NBA Finals concluded with the Los Angeles Lakers beating the Miami Heat for the title, wrapping up the season, several former Eastern I…

Decisions are often times hard to make. Throw in a global pandemic and first semester of college life; they can be daunting.

Zakiya Johnson has made a habit of facing life's challenges head-on.

The EIU president said U.S. Sen. Stephen Douglas supported slavery and the naming of the residence hall was "never intended to commemorate that." He said the name is "contrary to EIU's values."

More than 70 applications were submitted for the West Liberty University president position.

In a year filled with unexpected occurrences, professional sports looked much different than in any other year in memory. As the conversation …

CHARLESTON — The Eastern Illinois volleyball team has released its 2020 schedule, which will consist of 16 Ohio Valley Conference matches play…

One of Vincent Webb’s most memorable carries came his freshman year.

Eastern Illinois University's Madani Diarra works at a recent Panthers practice. Diarra, a native of Mali, is adjusting to life in the U.S. and hopes to make his mark on the EIU program.

Madani Diarra takes a shot at an Eastern Illinois practice.