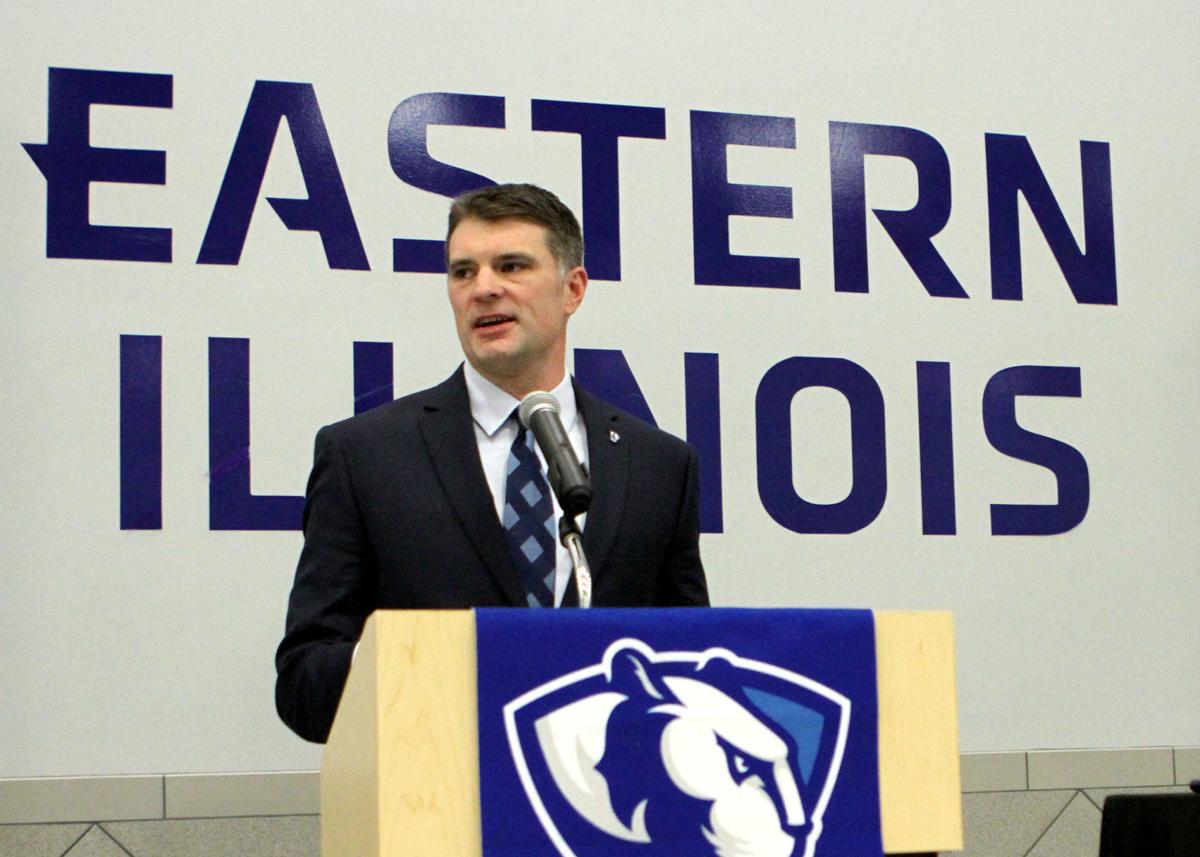 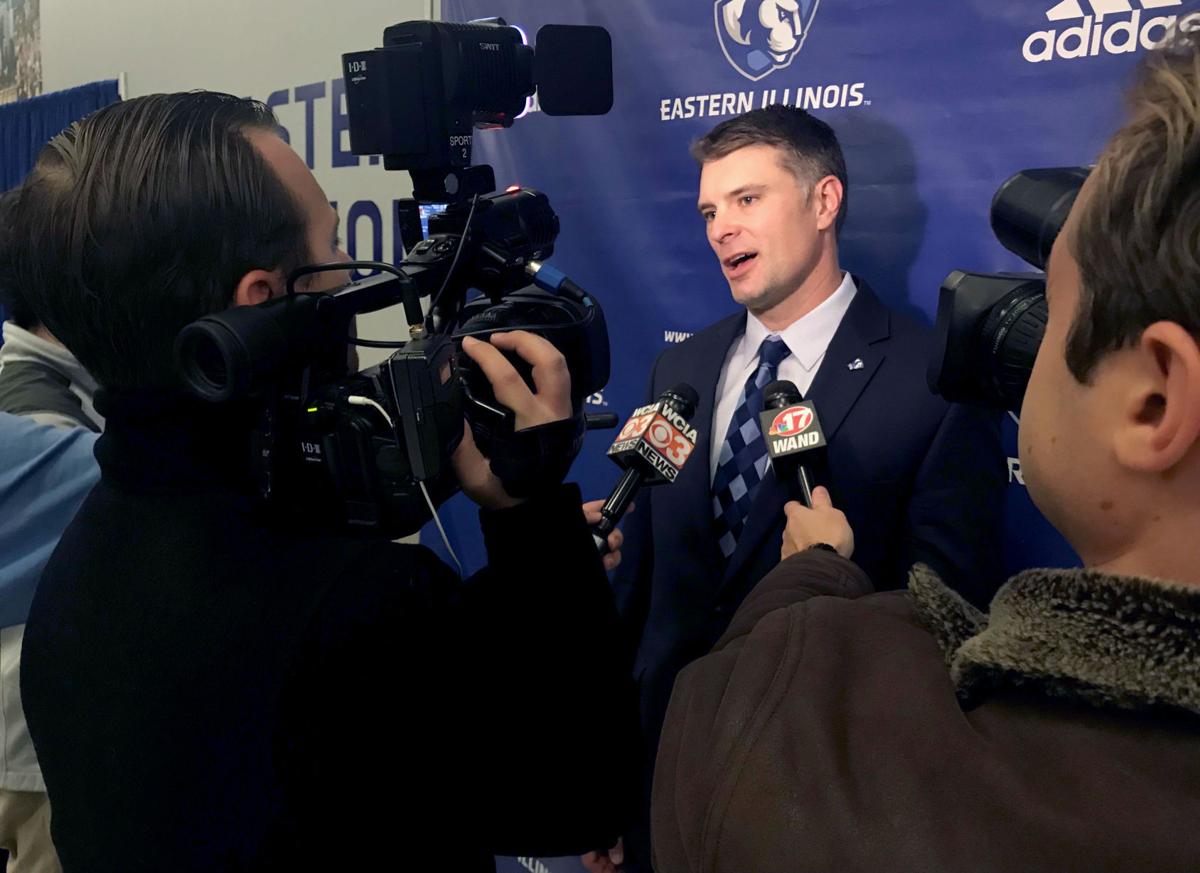 CHARLESTON -- "Today is a great day in my professional career," said Adam Cushing, who was hired as the 25th head football coach at Eastern Illinois University and introduced to the public Monday at the Baker/Warmoth Hall of Champions in Lantz Arena.

"It is a special day for EIU athletics," said EIU athletics director Tom Michael. "It represents a changing of leadership in our football program."

Cushing, who spent the last 15 years as an assistant at Northwestern, including the last 13 under this year's Big Ten Coach of the Year Pat Fitzgerald, is to start at EIU Jan. 2 after the Wildcats compete in the Holiday Bowl on Dec. 29 against Utah.

"Eastern Illinois is an amazing place with a rich football tradition," said Cushing, who serves as the offensive line coach for Northwestern. "I am humbled by the opportunity to lead this program. The plan is to take these students to places they have never been before and transform this community by their actions on and off the field.

"I love football. I love everything about it. I love every single minute I spend at the football office. I want the players to feel that. I want them to be excited even on the most demanding days and there is going to be demanding days, but if they show up with passion, energy and a positive attitude they are going to get a lot of work done. We are going to focus on our acronym What's Important Now -- W.I.N., to win. If we can focus on what is important now for the success we want later, we will get the result that we desire."

As for the football program's vision, Michael said, "It begins and ends with the educational mission of the university and creating an excellent experience for our student-athletes. Our biggest responsibility is transforming our student-athletes academically, athletically and personally. We have to give them back better than we got them."

Cushing replaces Kim Dameron, whose contract was not renewed Nov. 18 after going 27-30 in five years, including 3-8 this season. Dameron did lead the Panthers to the Football Championship Subdivision (FCS) playoffs in 2015.

"The interest in this job was outstanding," said Michael, who added there were applicants within the first hour of the press release about Dameron. "We conducted dozens and dozens of prescreening calls and ended with two candidates coming to campus. I had a number of highly qualified football minds that I was able to speak to in regard to our football program. They are some of the best football minds like Mike Shanahan (former NFL coach for Denver Broncos, Washington Redskins and Los Angels Raiders), Sean Payton (head coach of the New Orleans Saints), Ryan Pace (Chicago Bears general manager) and Tony Romo (former Dallas Cowboy), all proud EIU Panthers.

"I asked them directly what they thought was needed in our football program and each of them were extremely helpful and passionate. I can't overstate the importance of their involvement in this process. When then interviewing candidates for the position of head coach at Eastern Illinois, Adam's vision and performance fit so well with our expectations. Adam's priorities in leading a football program connected in every way."

On Sept. 12, 2015, Eastern Illinois played at Northwestern's Ryan Field and the Wildcats won 41-0. While Cushing didn't have any idea then that he would be the head coach of the Panthers just over three years later, he did always want to be a head coach, especially when he played for the legendary Frank Lenti (374-77 with 11 state championships -- ranging from Class 5A to 8A) at Mount Carmel in Chicago.

"I was very fortunate to play for coach Frank Lenti," said Cushing, a 1998 grad, who was a junior on the 14-0 Class 5A state champions in 1996. "When you play for a man like that who has positively influenced so many lives you can see what it does to people. That was the time of my life that I was truly transformed. I had an opportunity at Mount Carmel my junior year -- we had to do a Christian service project and I went and coached a little league baseball team as my way to give back to the community. It was at that moment that I saw boys improve and I got so excited."

Jack Cushing, Adam's father, coached Adam in all of his youth sports.

"He treated every single player on the team from everywhere with all different attitudes just like me -- like they were his own son," said Cushing. "He held us all to the same standards. With those early influences of my own life with my own father and coach Lenti, it was something I felt I was born to do. I got into coaching not for the next job but to affect young men in the same way I was affected."

Cushing started his coaching career at the University of La Verne (Division III school in La Verne, Calif.) as an assistant coach before becoming a graduate assistant at Northwestern and in 2005 became one of the nation's youngest assistant coaches when he was hired as the tight ends and H-backs coach. He has helped the Wildcats to 10 post-season bowl appearances.

"Pat Fitzgerald and Jim Phillips (Northwestern athletics director) are two individuals that I have been so fortunate to work with for the last 15 years," said Cushing. "They are the best 1-2 punch in FBS (football bowl subdivision) football and I get the opportunity to get that same type of support here from Tom Michael and Dr. (David) Glassman (Eastern Illinois president). The achievement of Fitzgerald and Phillips speak for themselves, but it's the values, the character and the true love for student-athletes that I have learned from them."

Fitzgerald had nothing but praise for Cushing.

"Adam has been a mainstay on our staff throughout my entire head coaching tenure, and someone I've relied upon constantly across a variety of roles. He's proven to be a terrific recruiter (twice named one of the Big Ten top recruiters by Rivals.com and ESPN.com) and a relentless teacher of the game. Over the last five years, he coached an offensive line that blocked for the most productive running back and quarterback in Northwestern history. Our staff won't be the same without him, but he's ready for his new chapter and he's earned it."

"He is just a stand-up person. He really turns his attention to dedication, commitment and is very solidly interested in the education of his student-athletes," said Glassman. "I think he is just going to bring a great measure of discipline and a winning attitude."

"As the saying goes, 'I have truly outkicked my coverage with my wife,'" said Adam Cushing. "She the most beautiful, most passionate, most inspiring woman that there is. It is her sacrifice that allows me to stand up here today. Everything she does is for the family that includes these beautiful children that we talk about. They are my constant reminder of what it is to serve the student-athletes to treat every single student-athlete the way my own children want to be treated and to love them the same."

Cushing's brother Matt Cushing is a 1993 Mount Carmel grad and was inducted into the school's Hall of Fame this year. Matt Cushing was an Academic All-Big Ten tight end at Illinois (1994-97) and played six seasons for the Pittsburgh Steelers in the NFL.

"Matt was a huge influence on me growing up, his work ethic and his attitude," said Adam Cushing. "When I was little I watched him succeed in the football field and it made me say, 'I want to do that -- I want to be just like him.' To this day we are each other's best friends and talk very openly and honestly about what the game does."

CHARLESTON -- At least for students, defense was at the forefront of the conversation Monday following the announcement of Eastern Illinois Un…

Adam Cushing, a Northwestern University coach since 2002, will be announced as the 25th head football coach at Eastern Illinois during a press…

EIU looks to even OVC record in season finale

Adam Cushing says EIU football plans to base its recruiting efforts in Illinois.

The Panthers hauled in 18 of their 26 total signees from Illinois.

CHARLESTON – Eastern Illinois is under the direction of new head coach Adam Cushing with the program utilizing the phrase #RunWithUs. With the…