CHAMPAIGN — Illinois quarterback Brandon Peters has only played 13 snaps this season. On Friday night, he'll finally get more as he returns from injury.

The sixth-year senior entered the season as the Illini's starting quarterback but left the season opener against Nebraska on Aug. 28 with an "AC joint sprain" to his left (non-throwing) shoulder, per the ACC Network. Peters was available last week at Virginia, but since he didn't take any practice reps leading up to that game, according to first-year Illinois coach Bret Bielema, he was held out.

Rutgers transfer Artur Sitkowski filled in for Peters, guiding the Illini to a 30-22 home win over the Huskers, but the team has dropped back-to-back non-conference games since then.

Bielema announced Monday that Peters is once again QB1 as the team looks to rebound Friday at home against unbeaten Maryland.

"A lot of the things that we had saw (from Peters) during fall camp, even going back to last spring, through the summer, through fall camp, weren't able to be materialized yet," Bielema said. "But he obviously has a very live arm and I think a lot of experience."

Peters is in his third year at Illinois. He's completed 194 of 359 passes for 2,348 yards and 21 touchdowns with eight interceptions in 17 games. The super senior completed 3 of 4 passes for 35 yards in the season opener, including a 19-yarder to tight end Luke Ford on the Illini's first offensive play of the game.

Offensive coordinator Tony Petersen said Peters has had a strong week of practice with the first-string unit.

"He's sharp, he's healthy, he's ready to go," Petersen said. "(He's) throwing the football. His right arm's got a lot of rest in the last two weeks, which is a good thing, but he's fired up and can't wait to get back in there."

Isaiah Williams, who used to share the quarterback room with Peters before switching to wide receiver, is eager for Peters' return, too.

In Peters' absence, Williams has established himself as the team's No. 1 target. The redshirt freshman leads Illinois in catches (19) and receiving yards (183) and scored his first college receiving touchdown in the season opener.

"Having BP, you know he got a huge arm so that's just more plays to be made," Williams said. "So having him back, it's time to just open it up and make some plays."

Running back Chase Brown, who returned from an undisclosed injury himself last week, added that Peters' knowledge of the game can't be overlooked either.

"Dude is really smart and knows the offense better than anybody," Brown said. "And I think that's what he's going to bring, his smart football play and that's really going to help us."

Two years ago, he briefly committed to Hutchinson Community College in Kansas.

Now, after his late SAT results made him eligible for Division I football, he's in his third season at Illinois and has become arguably the team's best cornerback.

Witherspoon has registered 20 tackles and a team-high seven pass breakups through three games. He attributed his success to his coaches, teammates and a matured mindset he's developed since joining the program.

"I done actually grew up finally," Witherspoon said. "Everybody holds me to my responsibilities — accountability. I just feel like I grew a lot more, not just as a football player but as a person.

Although Witherspoon and his peers have had a few moments of triumph, overall the Illini's defensive secondary has struggled. The team ranks last in the Big Ten in passing defense, allowing 311.7 yards per game.

"I just think it's being aware of the (other teams') formations, what routes and what concepts they might run," Witherspoon said. "So I just think our awareness around us can help us perform better."

When Maryland takes the field Friday at Memorial Stadium in Champaign, it'll serve as bit of a homecoming for Terrapins head coach Michael Locksley and associate head coach Ron Zook.

Locksley was Illinois' offensive coordinator from 2005-08 and worked alongside Zook, who was the Illini's head coach from 2005-11. They led the program to its fifth Rose Bowl appearance in 2007 and first in 24 years before eventually losing to USC and finishing the season 9-4.

"For me and my family (Illinois is) a special place," Locksley said, per the Associated Press. "Raised my kids there. My two older sons both graduated from high school there, and the two younger ones call it home. We were able to do some exciting things there."

Bielema said safety Sydney Brown will start Friday after leaving last week's game with a shoulder injury, but defensive lineman Keith Randolph Jr. "is probably a week away" from returning from a leg injury.

Brown has recorded 18 tackles and one pass breakup this season while Randolph has two sacks and one forced fumble.

Watch now: Jacksonville intercepts MacArthur in the end zone in the second quarter

Watch now: Jacksonville intercepts MacArthur in the end zone in the second quarter

Watch now: Illinois' Bret Bielema says 'as a head coach you're only as good as your roster"

"Instead of trying to get people to give something to me and to get a birthday present for me, I wanted to give people something from me."

Illinois has high expectations for the 2021-22 season and the Associated Press Top 25 preseason poll reflects that.

"I'm gonna come in and work hard," Payne said, pointing at the slogan on the tongues of his sneakers. "Just try to be the 'Every day guy' like they say."

Watch now: Who will start at quarterback for Illinois? Brandon Peters or Artur Sitkowski? 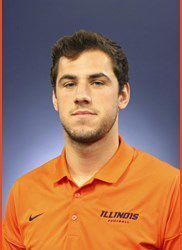