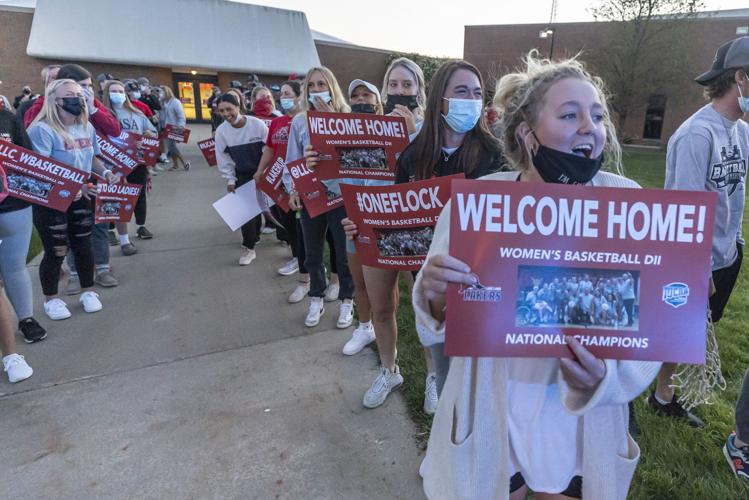 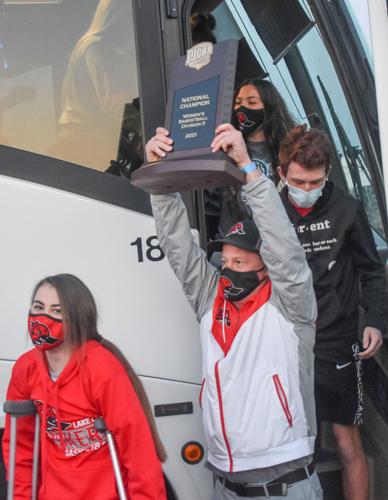 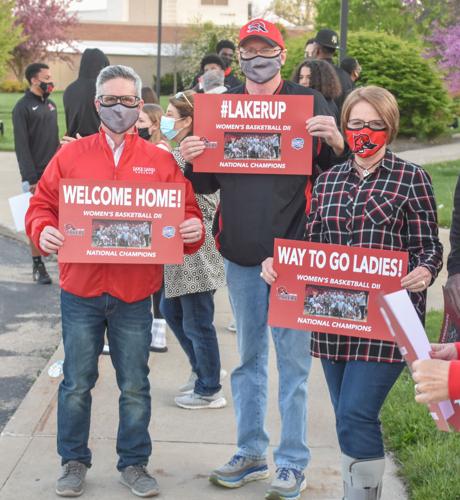 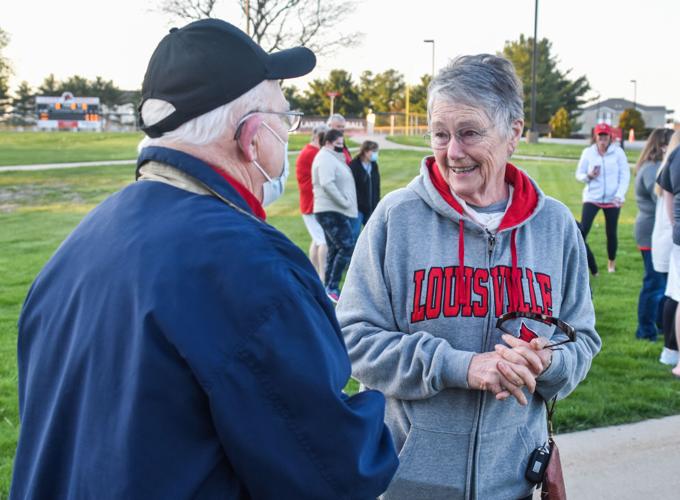 Nancy Gass, grandmother of Lake Land College women's basketball player Josie Orris, talks with college Board of Trustee member Mike Sullivan before the team's return from winning a national championship Sunday evening. Gass was able to attend the tournament and watch the team's win in Hickory, North Carolina, on Saturday. 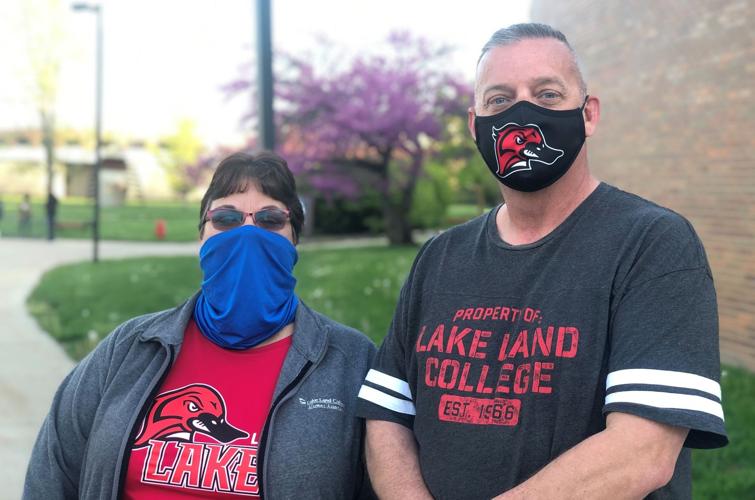 MATTOON — Having to come from behind to beat a team from Kansas wasn't the only obstacle the Lake Land College women's basketball team faced in winning a national championship.

Managing a season and staying on the court during the COVID pandemic wasn't easy, but Lake Land managed it.

Upon returning to Lake Land after winning the championship game against Johnson County Community College on Saturday, team members were understandably excited to talk about the game-time effort.

"We had to take it to our game," said team captain Harley Barry, who was named the tournament's most valuable player. "That what we're successful in."

After leading early, the team fell behind in the second half before coming back for a 53-49 victory in the title game of the NJCAA Division II Tournament, bringing the program its first-ever championship.

But while head coach Dave Johnson, also understandably, praised the team for being "exceptional all year," he and others mentioned the additional obstacles the team faced with the coronavirus pandemic.

"It was difficult year" because of it, Johnson said.

Last year, the pandemic interrupted what was proving to be an outstanding season and left only speculation about whether it would have included a championship.

During a welcome-home celebration on Lake Land's campus Sunday evening, Johnson noted that the team's won-loss record over the last two years is 55-5.

He said the team met shortly after the halt of last year's season and "from day one everybody said we're getting back there."

Returning to games this season while still dealing with the pandemic meant twice-weekly testing and "fingers crossed" that no one was positive for COVID-19, the coach added.

Johnson lauded the team for being careful because of the pandemic "but not only doing that but still focusing on studies and basketball."

The interruption from the pandemic means the teams' current sophomores have the option of returning to Lake Land for another season, Johnson said. He said he plans to talk with his second-year players in next couple of weeks about "what's best for them."

COVID-19 rates up, vaccinations down in Coles County

Lake Land President Josh Bullock was one of the 100 or so people who welcomed the team home Sunday evening and said he was "absolutely thrilled" with their accomplishments.

He also mentioned that the team, and all the schools' sports teams, were able to follow precautions, stay safe and still have a season of competition.

"Their desire to play really outweighed the challenges they faced," Bullock said. "There's no doubt this was their year."

Also on hand was Samantha Thompson, a Lake Land basketball player during 2015-17 who helped coach the team last season.

Thompson said she was "absolutely" certain that the team could make the "huge adjustments" to deal with the pandemic and make a strong run at the championship.

"I thought the girls were phenomenal," she said. "It was amazing to see everything they accomplished."

Madge Shoot, the college's comptroller, was one of the other college officials who greeted the team Sunday. She said the team performed well all season and could have won it all last year as well.

"I'm thrilled that they got the opportunity," Shoot said.

“They got kind of denied last year. They couldn’t go from the pandemic, of course, but we actually thought if they could have, we probably would have had back-to-back championships.”

He also said Lake Land students are "not only good here in the classroom and on the field, they're just all-around good kids."

Nancy Gass, who lives near Gays and is the grandmother of team member Josie Orris, was able to attend the tournament and see the team take the title.

She said it was "so exciting" to see the team fall behind but then end up with "everything on the rosy side."

"To think our little school could get that far," she said.

Lake Land plans another recognition ceremony to honor the team's championship but the arrangements for that haven't been finalized, according to college officials.

The latest case rate average for the county is 4.1% and the rate for the state region that includes Coles County is 2.9%.

The property at the northwest corner of Broadway Avenue and North 19th Street has been the location Mattoon's first gas station, a decades spanning taxi service, and a Greyhound bus depot at various times during the last 100 years or so.

The third annual Coles County Truck Convoy is slated to be held Aug. 7 at the former Trailmobile site, 1000 N. 14th St., in Charleston.

The Lake Land College Board of Trustees will vote on a new chair, vice chair and secretary at Thursday's post-election meeting.

Check out photos and results from the Green Wave's win against Effingham. Mattoon will play Charleston in the regional final on Thursday.

Nancy Gass, grandmother of Lake Land College women's basketball player Josie Orris, talks with college Board of Trustee member Mike Sullivan before the team's return from winning a national championship Sunday evening. Gass was able to attend the tournament and watch the team's win in Hickory, North Carolina, on Saturday.