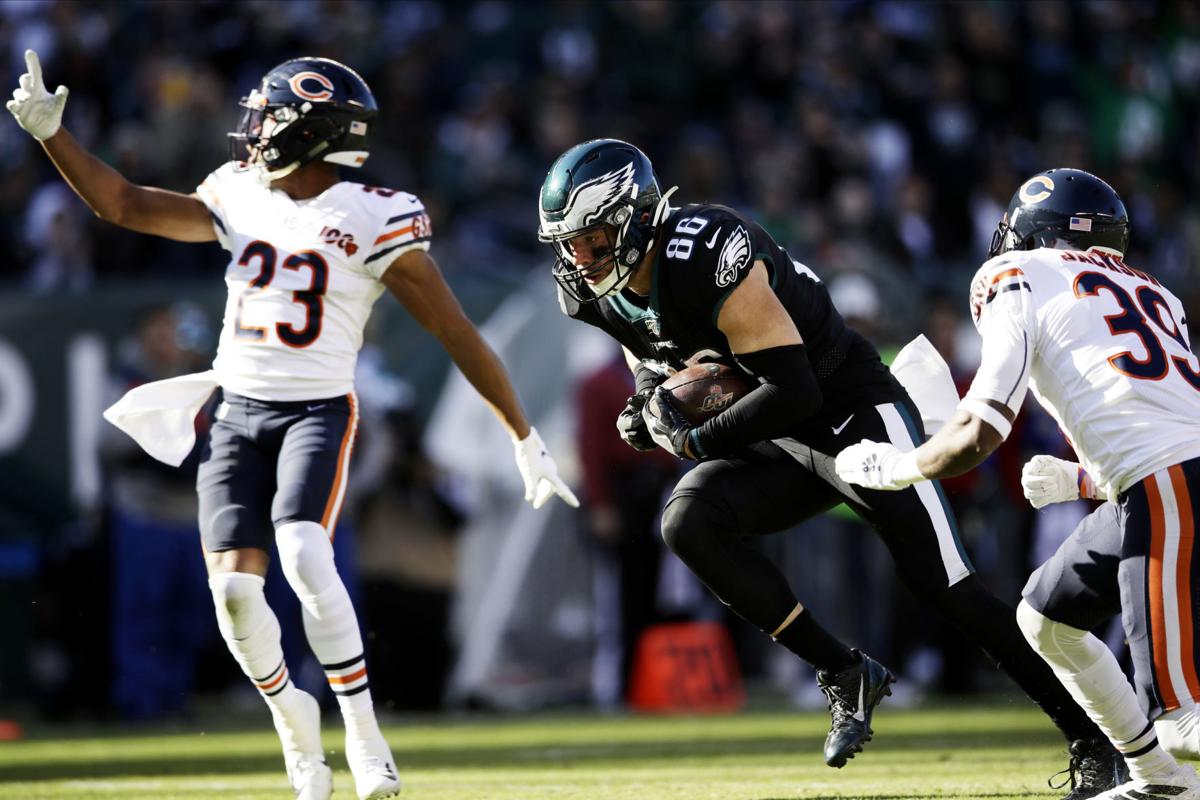 The Eagles' Zach Ertz, center, runs after a catch for a touchdown during the first half against the Bears Sunday in Philadelphia. 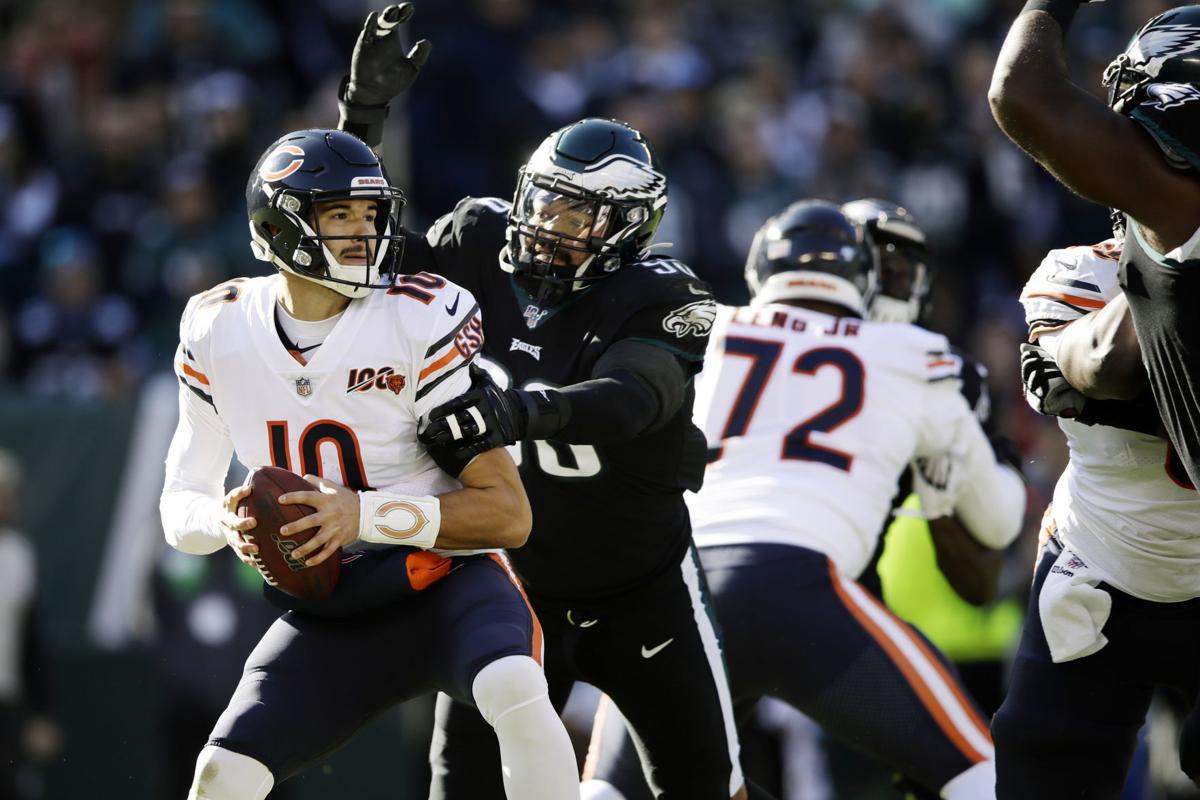 The Bears' Mitchell Trubisky (10) is tackled by the Eagles' Derek Barnett (96) during the first half Sunday in Philadelphia.

PHILADELPHIA — When they needed it most, the Philadelphia Eagles made all the plays.

Carson Wentz threw for 239 yards and one touchdown, Jordan Howard ran for 82 yards and a score and the Eagles held on for a 22-14 victory over the Chicago Bears on Sunday.

The Bears had just 9 yards in the first half and trailed 19-0 before David Montgomery had a pair of 1-yard TD runs to make it a one-possession game in the fourth quarter.

But Philadelphia put it away with 16-play, 69-yard drive capped by Jake Elliott's 38-yard field goal. Wentz completed all four of his third-down passes on the drive for first downs, and the Eagles held the ball for 8:14.

"We stayed on the field," Wentz said. "Those third downs were huge for us."

Dallas Goedert turned a screen on third-and-9 into a 16-yard gain. Miles Sanders had a 15-yard reception on third-and-12 and Alshon Jeffery bounced back from two big drops to make a 13-yard catch on third-and-3.

"That was a heck of a drive," Goedert said. "We connected when we needed to. It was well-executed."

The Eagles (5-4) have won two in a row after a pair of lopsided losses.

The Bears (3-5) have lost four straight.

Mitchell Trubisky was 10 of 21 for 125 yards and was sacked three times.

The Bears went three-and-out on their first five possessions, gaining minus-10 yards. They didn't get a first down until the final minute of the first half.

"The score felt a lot worse than it was," Bears coach Matt Nagy said. "We just couldn't get going and it snowballed. One thing after the next."

Wentz connected with Zach Ertz over the middle for a 25-yard touchdown pass to give the Eagles a 12-0 lead in the second quarter. Elliott missed the extra point wide right.

Howard ran up the middle 13 yards for a TD on the opening drive of the third quarter, extending the lead to 19-0.

"I saw a big hole and tried to hit it as fast as I could," said Howard, who was nearly untouched.

The Bears finally got going when Trubisky connected with Taylor Gabriel on a 53-yard pass to the Eagles 9 and Montgomery ran in from the 1. He leaped in from the 1 early in the fourth quarter.

But Chicago couldn't complete the comeback.

"Losing sucks and you can tell we don't like it," Trubisky said. "On the sideline, you're trying to find solutions to how to spark this offense to get going. It could just be getting back to the simpler things. Go fast and let our guys roll."

The Eagles had a first down at the Bears 5 on their opening drive, but settled for a 28-yard field goal by Elliott after Eddie Goldman sacked Wentz.

Elliott kicked another 28-yarder on the next drive to make it 6-0.

Wentz has thrown a TD pass in 12 straight games, tied with Seattle's Russell Wilson for longest active streak. ... Eagles have won 11 of last 15 against Chicago. ... Bears LB Khalil Mack had four tackles, including two for loss, one quarterback hit and one pass knockdown. ... Eagles DT Genard Avery had a half-sack in his debut with his new team.

Howard averaged 4.3 yards per carry in his first game against his former team. Jeffery had four receptions for 36 yards and at least two drops.

"I did a lot more talking than I usually do," Howard said. "There was a lot more back-and-forth with the guys."

Eagles cornerback Sidney Jones, a second-round pick in 2017, didn't dress. Jones was projected to be a first-round pick before tearing his Achilles on his pro day. He has failed to live up to expectations in his two-plus seasons.

Eagles: WR DeSean Jackson lasted just one series after returning to the lineup for the first time since suffering an abdomen injury in Week 2. He drew a pass interference on the first play and had a 5-yard catch. Coach Doug Pederson said Jackson was held out for precautionary reasons and will undergo more testing this week. ... LT Jason Peters (knee) and LB Nigel Bradham each missed their third straight game.

The Eagles' Zach Ertz, center, runs after a catch for a touchdown during the first half against the Bears Sunday in Philadelphia.

The Bears' Mitchell Trubisky (10) is tackled by the Eagles' Derek Barnett (96) during the first half Sunday in Philadelphia.