Become a Member
Read Today's E-edition
Share This
Brett Favre’s advice to Aaron Rodgers: ‘You don't want to go out this way’
0 comments
Share this
1 of 2 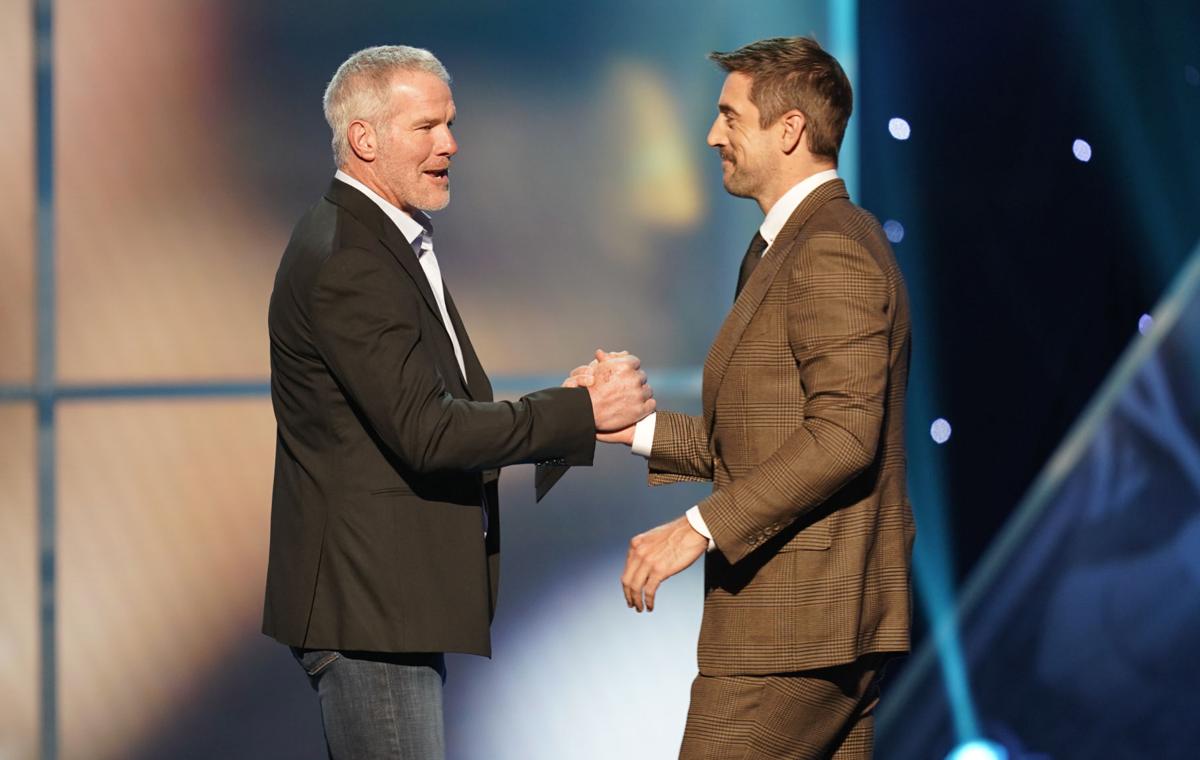 Brett Favre presents the moment of the year award to Aaron Rodgers at the NFL Honors at The Fox Theatre Feb. 2, 2019, in Atlanta. 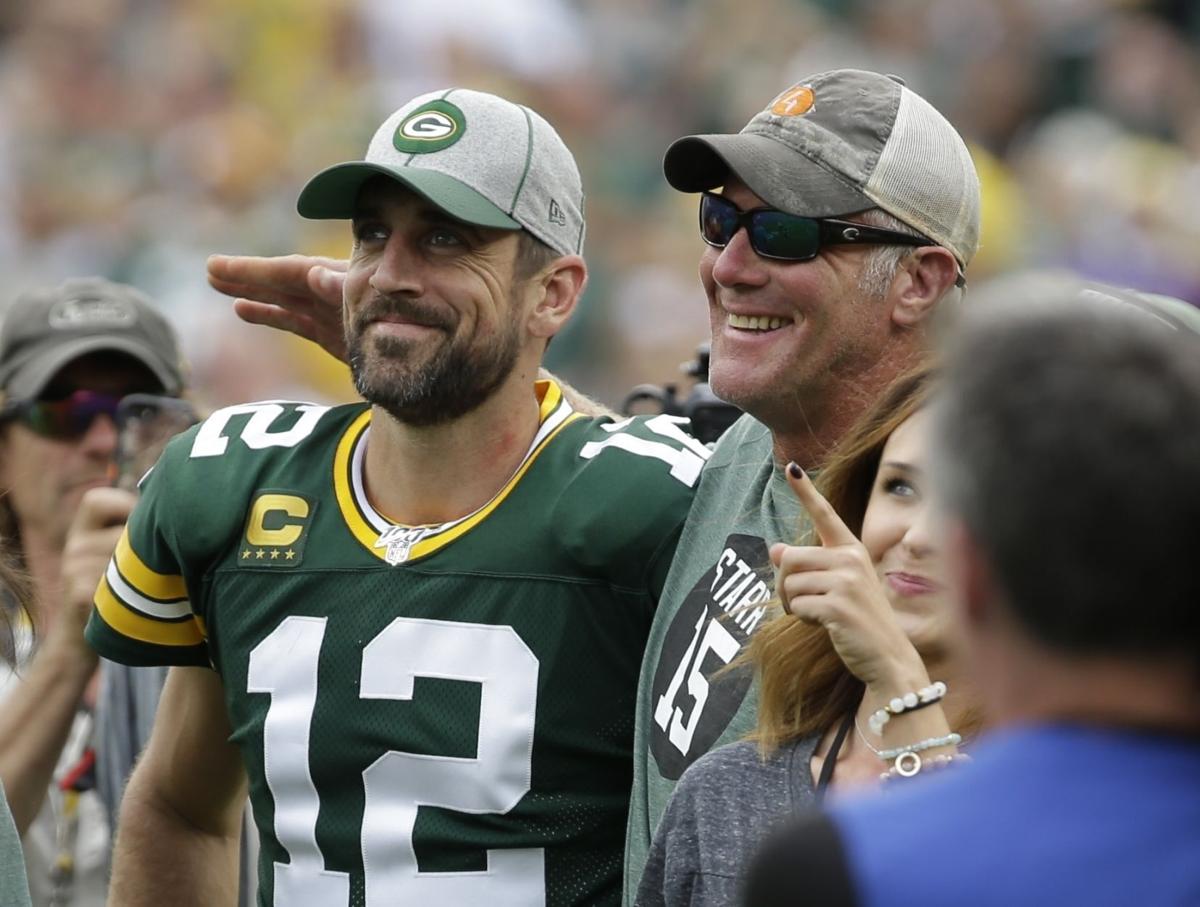 Green Bay's Aaron Rodgers smiles with ex-Packers quarterback Brett Favre during halftime of the Sept. 15, 2019, game against the Vikings at Lambeau Field.

GREEN BAY — Brett Favre would like nothing more than to see his quarterbacking successor and good buddy Aaron Rodgers do something Favre himself couldn’t: Win a second Super Bowl title in a Green Bay Packers uniform.

But given the level of acrimony he sees between the organization and Rodgers — a familiar feeling, having been there himself in 2008 before being traded to the New York Jets — Favre isn’t betting on there being a happy ending here with Rodgers holding another Vince Lombardi Trophy aloft.

Speaking during a 45-minute interview on ESPN Wisconsin’s “Wilde & Tausch” Wednesday morning, Favre shared that he and Rodgers exchanged text messages after news of Rodgers’ unhappiness with general manager Brian Gutekunst and the organization came to light last Thursday, a few hours before the 2021 NFL draft kicked off.

“I think I know Aaron fairly well, and honestly I just don’t see him coming back and just saying, ‘All right, let’s just bury the hatchet, whatever caused the rift, and I’m just going to come back and play because I love the guys, I love the Green Bay fans,’” Favre said. “His rift isn’t with the fans or the players. It’s with the front office. Will he just swallow his pride and come in? Maybe. But I don’t see that happening.

“If there’s not a trade, my gut tells me that he’d rather sit out than play. That’s just my gut. There’s no reason for me to say that other than that’s what my gut’s telling me, and I think you guys know Aaron fairly well enough to sort of feel the same way.”

Later, Favre added: “It’s going to be interesting what takes place here between now and the start of camp. But right now, I’m not very optimistic.”

Favre said he started getting texts from friends and family after ESPN reported what had long been known behind the scenes — that Rodgers had been unhappy the team since even before the Packers’ NFC Championship Game loss to the Tampa Bay Buccaneers, who went on to win the Super Bowl.

“I didn’t watch the draft, but I had everybody sending me messages. Within in the first few picks of the first round, people kept sending me messages. ‘Hey, Aaron’s getting ready to be traded.’ I’m thinking, ‘You’re crazy. What’s going on?’” recounted Favre, who lives in Mississippi in retirement but has become close friends with Rodgers in recent years. “I kept getting different people (asking), ‘What’s Aaron going to do? Have you heard anything?’

“I just sent Aaron a message and said, ‘Hey, am I going to see you playing for the (New Orleans) Saints this year?’ Just kind of joking. He sent back, ‘Hey, buddy, I don’t believe that’s going to happen.’

“I said, ‘Hope everything’s OK. I’m getting a lot of messages from people asking me what’s the deal.’ He said, ‘Thanks for checking on me. I’ll touch back with you after all this is over.’ And that was it. We haven’t talked since.

“Everybody thinks that I’m a direct line. I don’t expect Aaron to reach out to me. If he said, ‘You mind if I pick your brain?’ I’d certainly love to talk to him.”

Please log in to keep reading.
Enjoy unlimited articles at one of our lowest prices ever. {{featured_button_text}}
Football

Defining moments: Packers’ 5 most consequential trades since the team’s renaissance began in 1992

Multiple sources have said that among Rodgers’ frustrations has been Gutekunst’s lack of communication with him and what he perceives to be a lack of respect for him from the GM. That goes back well beyond Gutekunst’s decision to trade up in the first round to take Rodgers’ heir apparent, Utah State quarterback Jordan Love — and doing so without giving Rodgers a courtesy call beforehand to tell him what was about to happen.

None of those moves in and of themselves would have been problematic if they didn’t create a clear pattern that Rodgers’ input and opinion isn’t valued — or even sought — by Gutekunst, though the fourth-year GM said otherwise when the draft wrapped up on Saturday.

Asked then if he’d be open to including Rodgers in such conversations if that was a requisite for Rodgers returning, Gutekunst replied: “Absolutely. Quite frankly, I think over the past three years that I’ve been doing this, I’ve always welcomed that input. I think he has such an experience in this league that that input would always be something vitally important to me, if he’s willing to give it. That’s not new. That’s not unique.”

Certainly, Favre could be a resource for Rodgers, given how Favre left the organization in 2008, getting traded to the New York Jets after unretiring and reporting to training camp. Favre eventually engineered his way to the rival Minnesota Vikings, whom he led to a pair of regular-season victories over the Packers and to within overtime of a Super Bowl berth.

Favre was embraced by most of the Packers’ passionate fan base when he returned in 2015 to be inducted into the Packers Hall of Fame, but he admitted Wednesday that might not have been the case had he led the Vikings to their first NFL title.

‘They might kill you, but they won’t eat you’: Brian Gutekunst could use Ted Thompson’s advice amid Aaron Rodgers saga

For his part, Favre is hoping Rodgers doesn’t end up in the same spot. Having led the 1996 Packers to the Super Bowl XXXI championship before taking the 1997 team to Super Bowl XXXII only to lose to John Elway and the Denver Broncos, Favre said Wednesday he wants to see Rodgers get that second ring — while still in a Packers uniform.

He just has his doubts.

“I’d like to see him win a Super Bowl in Green Bay, another one,” Favre said. “But the thing is, life’s too short, I want him to be happy. He’s been there as long as I was there, and I know what that means, and he’s put up unbelievable numbers. Win another Super Bowl and then do what you want to do, whether it’s keep playing, play somewhere else, whatever. But win one more in Green Bay and go out the way you want to go out.

“You don’t want to go out this way, whether it’s sit out or play somewhere else.”

Look to the Chargers and Seahawks to make the playoffs

Watch now: Packers add talent on both sides of the ball with deep draft class

Get to know all nine players taken by the Green Bay Packers in the 2021 NFL Draft.

Look to the Chargers and Seahawks to make the playoffs

Brett Favre presents the moment of the year award to Aaron Rodgers at the NFL Honors at The Fox Theatre Feb. 2, 2019, in Atlanta.

Green Bay's Aaron Rodgers smiles with ex-Packers quarterback Brett Favre during halftime of the Sept. 15, 2019, game against the Vikings at Lambeau Field.