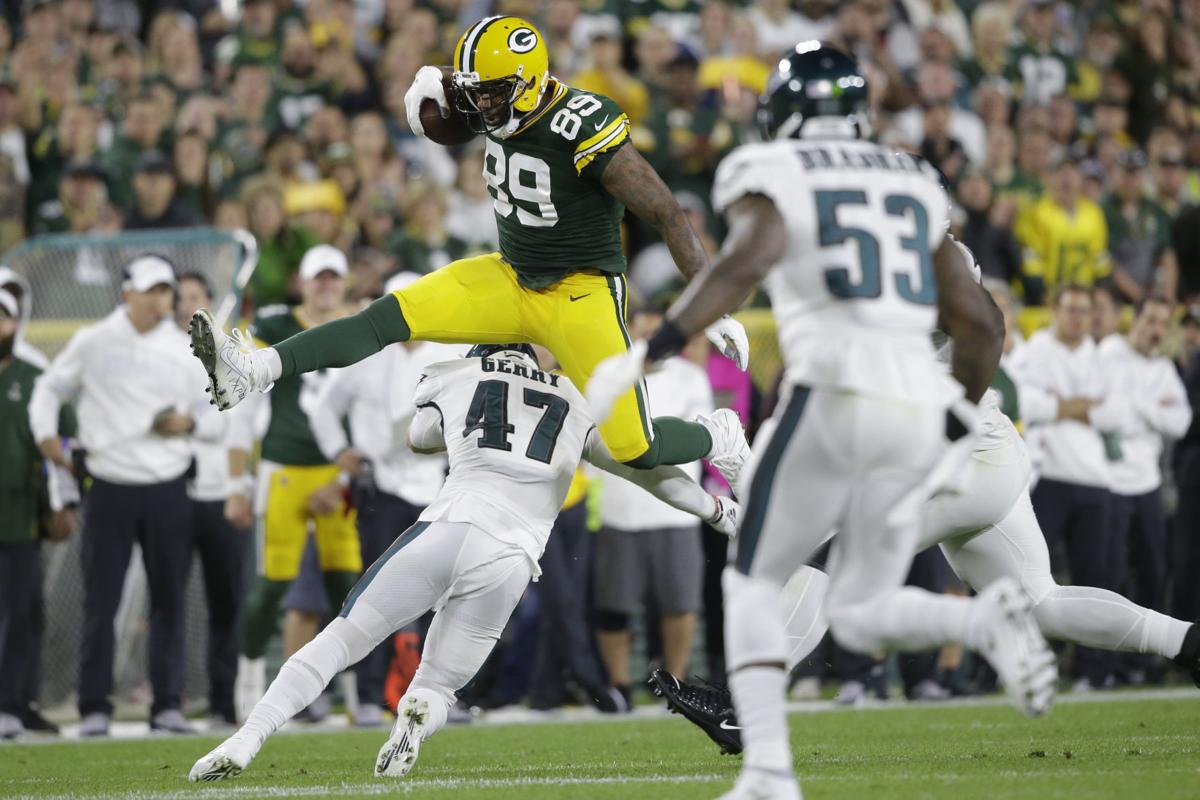 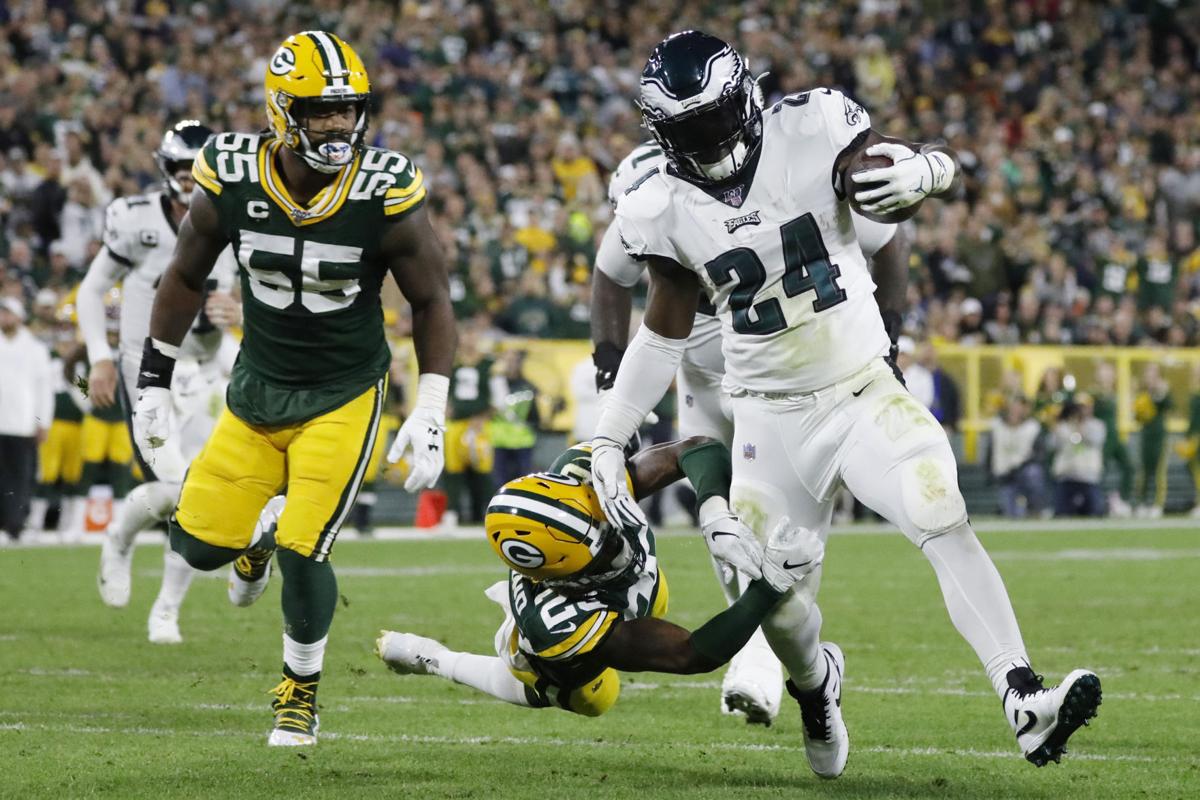 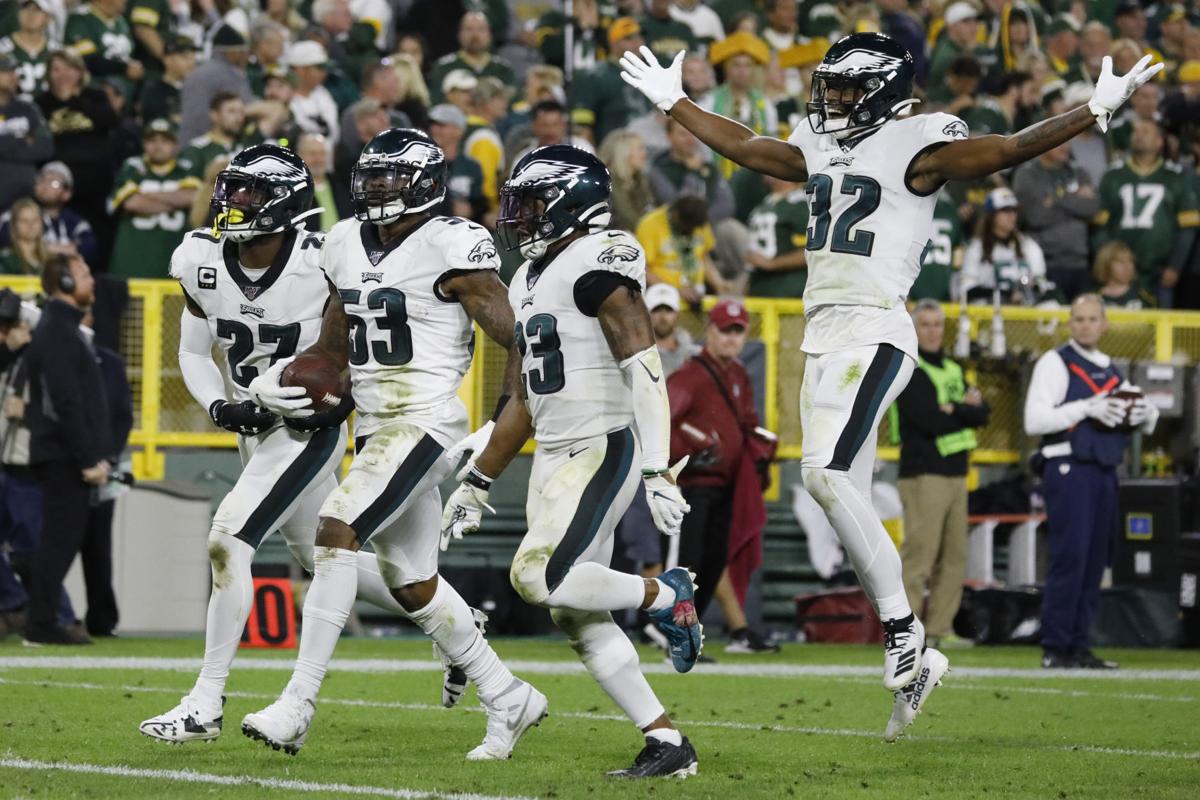 Eagles outside linebacker Nigel Bradham (53) and teammates celebrate his interception in the last minute of Thursday night's game against the Packers in Green Bay, Wis.  Philadelphia won 34-27.

GREEN BAY, Wis. — Craig James was on the practice squad at the beginning of the week.

The short-handed Philadelphia Eagles promoted the second-year undrafted cornerback to the active roster two days before the prime-time matchup in Green Bay. James responded by making the game-winning play in the 34-27 win over the Packers on Thursday night.

With 25 seconds left, James jumped a quick slant by Marquez Valdes-Scantling and tipped Aaron Rodgers' pass into the end zone where Nigel Bradham collected it and sealed the victory.

"I'm a no-name out there, so when somebody that doesn't get a lot of playing time gets in the game, that's the target," James said. "That's the game plan. Coaches tell you, 'Go at him. That's the weak link.' But as the weak link, I still have to be as prepared as the starters."

Howard finished with 87 yards on 15 carries and two touchdowns rushing and one receiving, Carson Wentz went 16 for 27 for 160 yards, three scores and no turnovers, and the Eagles rebounded after losing consecutive games by a combined seven points.

"We already were confident," Howard said. "We already believed in ourselves. It probably reassured everybody else."

Rodgers started 10 for 10 and finished 34 for 53 for 422 yards, two touchdowns and a fumble that set up a short Philadelphia scoring drive.

Davante Adams had a career-high 180 yards on 10 catches for Green Bay, but he wasn't on the field for the Packers (3-1) on the last drive because of a toe injury.

"Obviously, having him out there would have been for the better, but we had a lot of chances down the stretch," Rodgers said. "We moved the ball well all day long. We just struggled in the red zone."

Adams was hurt after making a catch in the fourth quarter that gave the Packers first-and-goal at the 8. Avonte Maddox was called for pass interference on the next play while teammate Andrew Sendejo collided with him.

Maddox was carted off the field on a stretcher late in the fourth quarter, which forced coach Doug Pederson to turn to James.

Rodgers had first and goal from the 1 after the delay and threw four straight incompletions.

"Credit the defense, man, it was twice down there," Pederson said. "... Any time you can keep an Aaron Rodgers team out of the end zone, it's a positive thing."

After punting on its first two drives and falling behind 10-0, Philadelphia scored on four straight possessions against a defense that had only given up 35 points through the first three games.

Sacked six times in the previous two games, Wentz managed to stay upright. Zach Ertz had a team-high seven catches for 65 yards, and Alshon Jeffery, who missed all but six snaps over the past two weeks with a calf injury, finished with 38 yards and a touchdown on three catches.

Rodgers and Adams connected on a 58-yard completion on the opening drive. It was the longest play of the season for Green Bay, which scored a touchdown on its opening drive for the third consecutive game. Aaron Jones scored from 3 yards out two plays later to give the Packers the early lead.

Mason Crosby added a field goal in the beginning of the second quarter to make it 10-0.

The Eagles finally got a little momentum on a 67-yard return by Miles Sanders on the ensuing kickoff. The return set up a 6-yard score by Jeffery.

Green Bay added another field goal to take a 13-7 lead.

Wentz found tight end Dallas Goedert for a 3-yard touchdown strike to give the Eagles a 14-13 lead just before the two-minute warning.

Rodgers fumbled on the following drive after a strip-sack by Derek Barnett. The Eagles capitalized with 1-yard score by Howard. Howard's touchdown made it 21-13 with 54 seconds to go.

Rodgers needed just 50 seconds to lead the Packers 70 yards. The two-time MVP found Geronimo Allison for a 19-yard touchdown to make it 21-20 at the half.

The Eagles opened the second half with a 20-yard score from Wentz to Howard. After a failed two-point conversion, Philadelphia led 27-20.

Jimmy Graham got his first catch and score since Week 1. Graham had six catches for 61 yards and a 14-yard touchdown that tied the game at 27-27 with 3:16 to go in the third.

Howard scored his third touchdown on a 2-yard run that made it 34-27 at the start of the fourth.

The Eagles picked up the victory despite committing nine penalties for 93 yards.

Eagles: CB Sidney Jones suffered a hamstring injury and did not return. That leaves Philadelphia with only two healthy cornerbacks — Rasul Douglas and James — on the roster.

Packers: RB Jamaal Williams was carted off the field on the first play from scrimmage. He did not return. CB Tony Brown suffered a hamstring injury and did not return. RT Bryan Bulaga left with a shoulder injury. He also did not return. S Will Redmond was being evaluated for a concussion. CB Kevin King suffered a groin injury. Adams suffered an injured toe.

Eagles outside linebacker Nigel Bradham (53) and teammates celebrate his interception in the last minute of Thursday night's game against the Packers in Green Bay, Wis.  Philadelphia won 34-27.