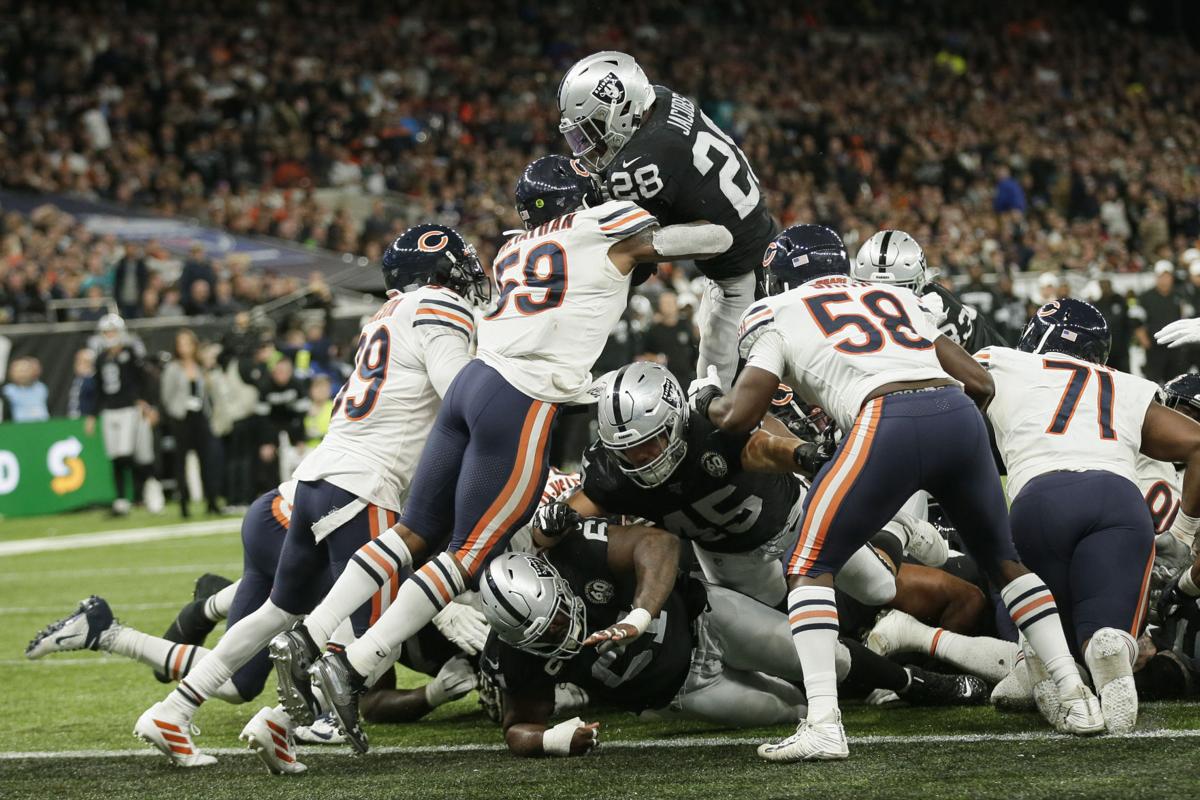 Raiders running back Josh Jacobs (28) goes over the top for a touchdown late in the fourth quarter of Sunday's game against the Bears in London. Jacobs' TD gave Oakland a 24-21 win. 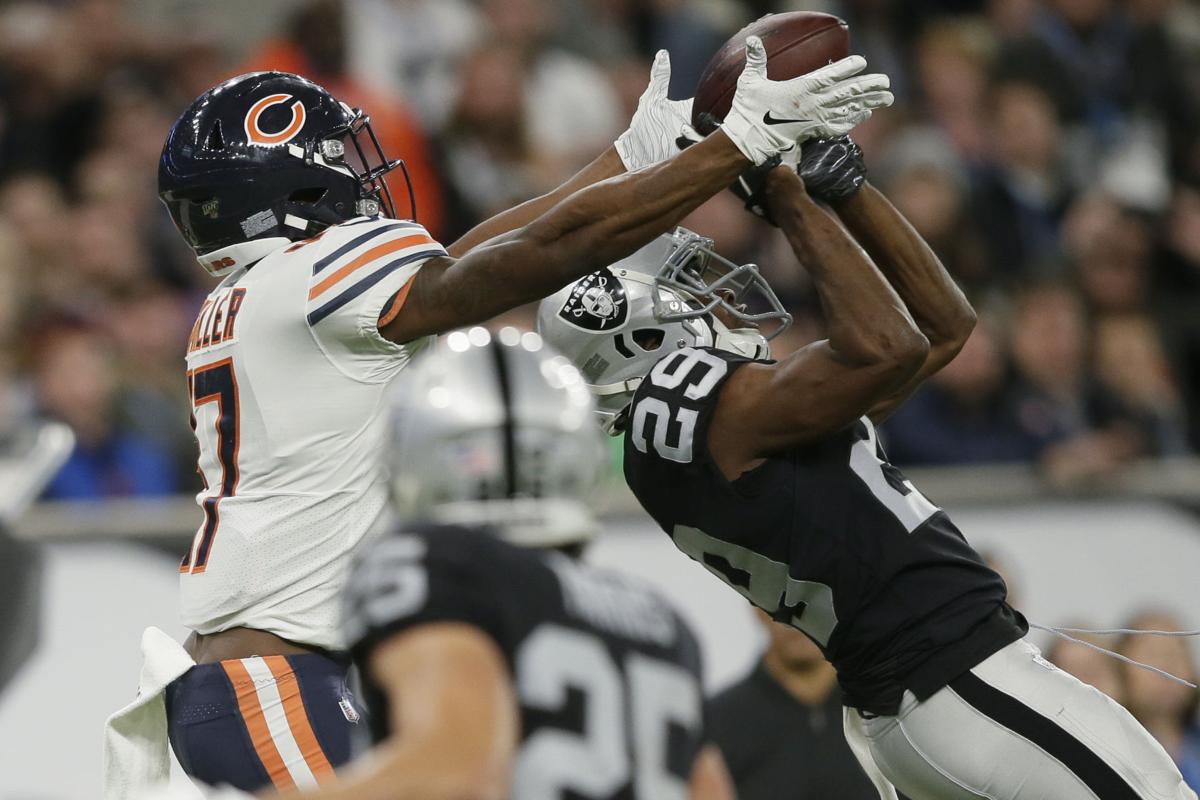 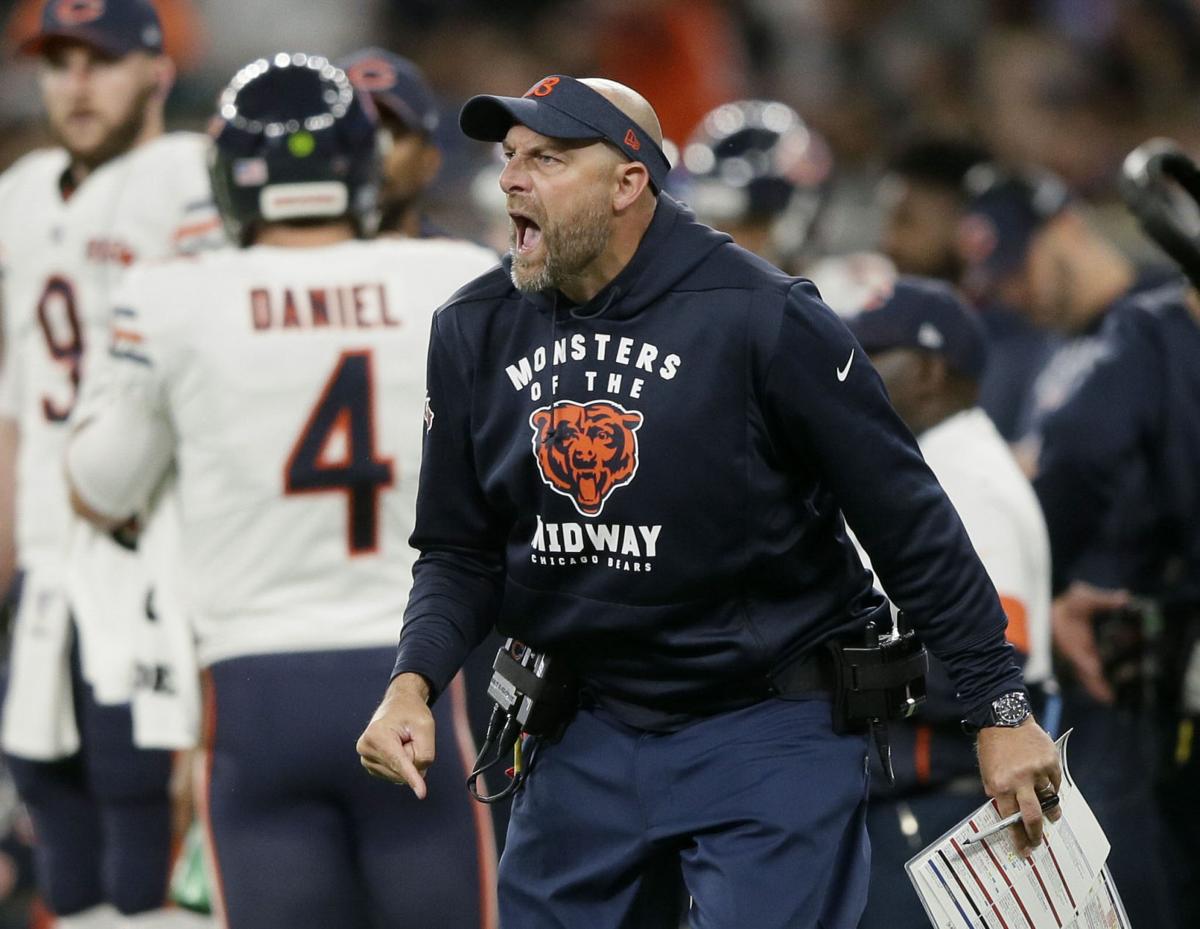 Bears head coach Matt Nagy reacts during the second half of Sunday's game against the Raiders in London. Oakland beat Chicago, 24-21.

LONDON — All that pregame talk about Khalil Mack and the Monsters of the Midway defense only served as motivation for the Oakland Raiders.

A dominant performance from the offensive line, a breakthrough game from a rookie running back and the ability to bounce back from a third-quarter meltdown made Oakland's weeklong stay in London a success.

Josh Jacobs scored his second touchdown of the game with a leap from the 2-yard line with 1:57 to play, capping a 97-yard drive that helped the Raiders rally after blowing a 17-point lead to beat the Chicago Bears 24-21 on Sunday.

"We were up for the challenge," Jacobs said. "All week that's all we heard was how good their defense was and they are a great defense. But we wanted to prove we're a good offense."

They did that with an impressive drive that was part of a roller-coaster game that delighted the sellout crowd in London. The Raiders (3-2) broke out to a 17-0 halftime lead only to fall behind the Bears (3-2) in a mistake-filled third quarter.

Then Oakland fumbled at the goal line when going in for the go-ahead score, needed a replay review to overturn a fumble on a successful fake punt on the game-winning drive and then intercepted Chicago backup quarterback Chase Daniel with 1:14 to go to seal the victory.

"We know everyone counted us out," Raiders quarterback Derek Carr said. "We knew no one would pick us to win this football game. And we hadn't really proven anything for them to pick us, right? But it just shows you the grit and determination of our young guys."

It sure didn't come easy but the Raiders earned a satisfying victory in its first game against Chicago since dealing star edge rusher Khalil Mack to Chicago before last season.

That trade has come under heavy scrutiny as Mack led the Bears to the playoffs last year while the Raiders struggled. But Oakland came out ahead this day with Mack's only big play coming when he recovered a fumble after Jacobs went the wrong way on a pitch that sparked Chicago's third-quarter comeback.

The Bears turned that turnover into a 1-yard run by David Montgomery and got two TD passes from Daniel to Allen Robinson in the third quarter to take a 21-17 lead.

It looked as if it wouldn't be Oakland's day when Sherrick McManis punched the ball loose from Trevor Davis at the goal line and Prince Amukamara recovered at the 1 for Chicago.

A brilliant top-tapping sideline catch by Robinson and a roughing the passer penalty on Maurice Hurst that angered the Raiders and overturned an interception by Daryl Worley helped the Bears move the ball off the goal line.

Chicago pinned Oakland to the 3 with the punt before the Raiders responded with their longest game-winning drive in the fourth quarter in at least 20 years, aided by Erik Harris' 3-yard run on a fake punt after Chicago committed a running into the punter penalty on fourth-and-6.

Carr completed a 23-yard pass to Foster Moreau on third-and-1 to get the ball deep and Jacobs finished it off as part of a big night from the player acquired with one of the draft picks Oakland got for Mack. Jacobs ran 123 yards and two scores against a defense that hadn't allowed 100 yards rushing to a single team all season.

The Bears on the other hand managed only 42 yards on 17 carries for the game as Oakland controlled both lines of scrimmage.

"In this game, it usually starts up front, and know that," coach Matt Nagy said. "We preach it. We talk it. We understand that, and we just throughout the game weren't real successful offensively with running the football. It's been an issue this year, and so we need to figure out why."

BLIND SIDE: Mack got most of his pass rush attempts against second-year left tackle Kolton Miller. Miller had a rough rookie year but is playing much better in year two and managed to keep Carr clean most of the night thanks to some help from his tight ends and back and a quick-passing game.

SACK ATTACK: The lack of a pass rush had been a recurring issue in Oakland ever since the Mack trade. The Raiders came into the game with a league-low 18 sacks since the start of 2018 but had three alone in the first half as Daniel held onto the ball too long. Maxx Crosby, Benson Mayowa and Maurice Hurst all came up with sacks, the first time Oakland had three in the opening half since Mack's final season with the team in 2017. Hurst added another on the final play of the game.

INJURIES: Bears DT Akiem Hicks (elbow) left the game in the first half and didn't return.

Jacobs left the game briefly for the Raiders with an elbow injury but returned.

UP NEXT: Chicago gets a week off following the long trip and will host New Orleans on Oct. 20.

Oakland gets the week off and then will continue a 48-day stretch between home games with a visit to Green Bay on Oct. 20.

Raiders running back Josh Jacobs (28) goes over the top for a touchdown late in the fourth quarter of Sunday's game against the Bears in London. Jacobs' TD gave Oakland a 24-21 win.

Bears head coach Matt Nagy reacts during the second half of Sunday's game against the Raiders in London. Oakland beat Chicago, 24-21.