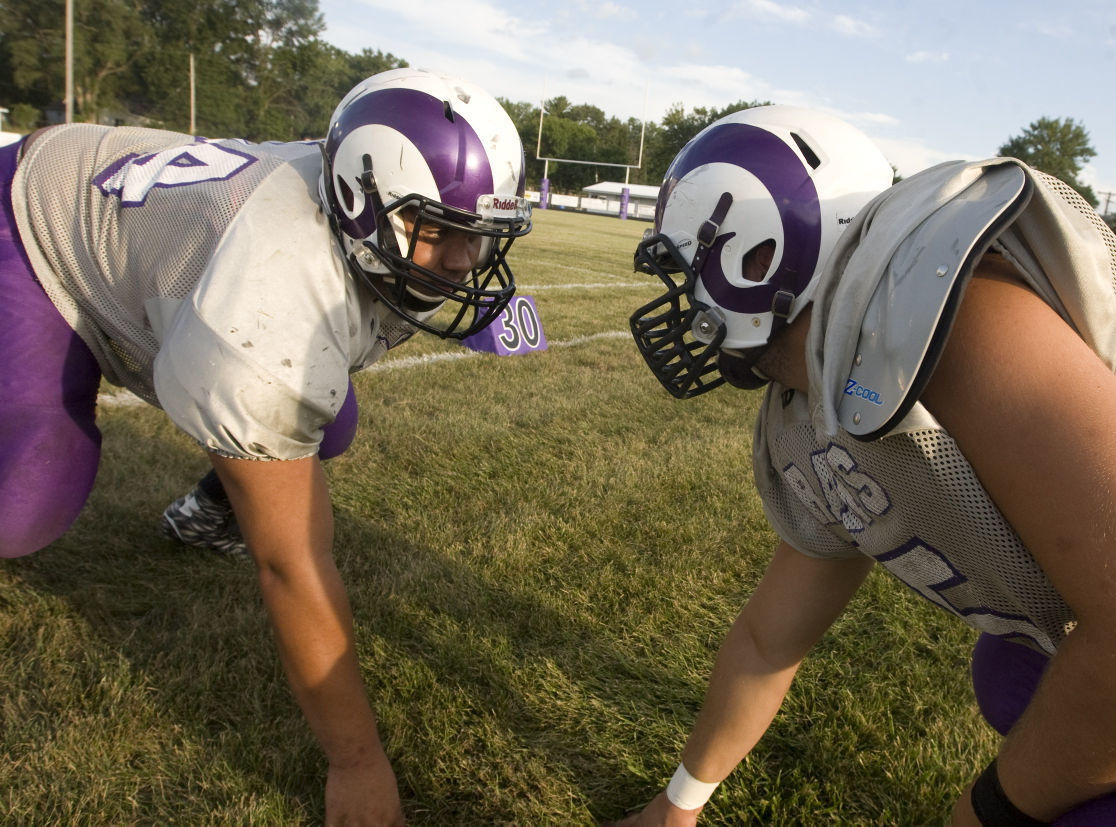 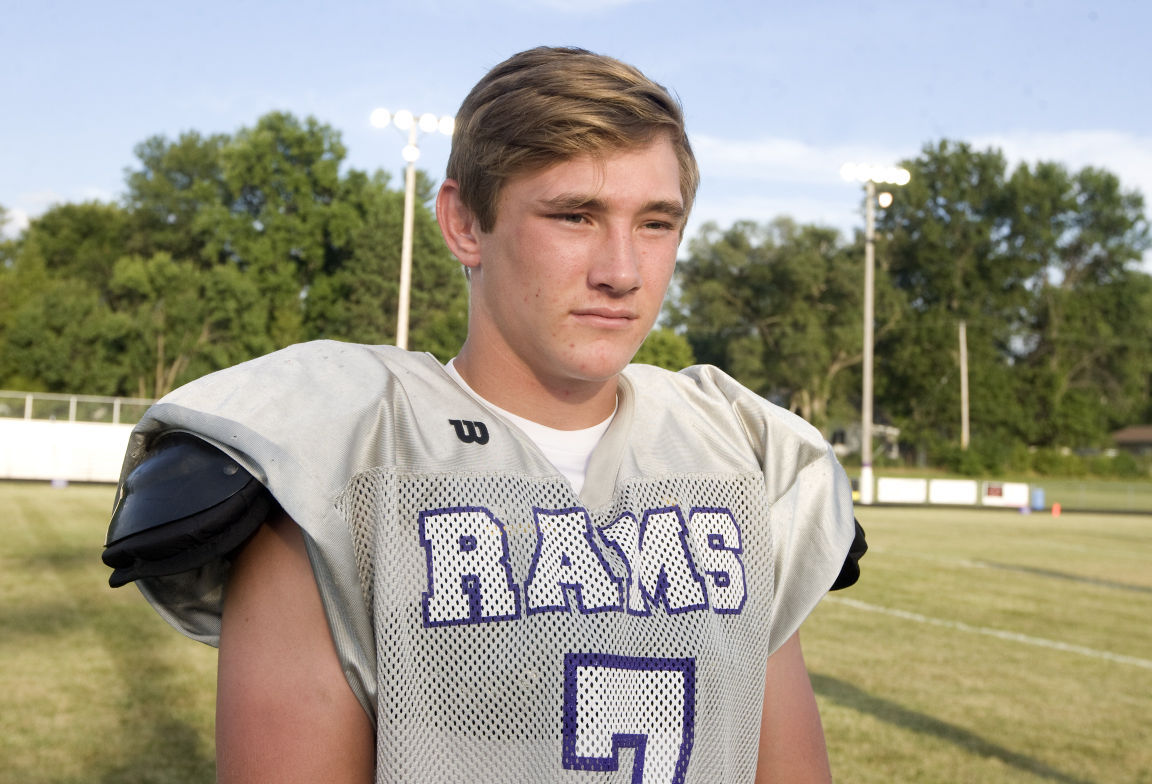 SHELBYVILLE -- Mark Ramsey has never had more fun coaching. He's also never coached a team quite like this one.

Last year was just Ramsey's second coaching at Shelbyville, but the team was what Ramsey was used to during his years at Central A&M -- senior-led, with coaches he was familiar with and players who knew what was expected.

Ramsey figured this year's team would be a challenge, with small junior and senior classes. But he had no idea just how young the team would end up being.

"We thought we were going to have more upperclassmen, but there were a couple that didn't come out, we had this big heavyweight wrestler who moved back to Marengo and there was another kid who was a senior who got a job," Ramsey said. "I have six or seven seniors and five juniors in all. And 19 sophomores."

Somehow, with that much youth, Shelbyville won its first two games. The Rams looked like they were in trouble in Week 1 against Pawnee, which began the season No. 11 in the Class 1A poll. Shelbyville fell behind 14-0 in the first half but scored the game's final 20 points to win. In Week 2 against a Class 4A team in Rantoul, Shelbyville built a 21-0 lead and held Rantoul scoreless until the fourth quarter in a 29-16 win.

"Pawnee had 15 seniors -- big, strong kids with a big line and kids who ran hard," Ramsey said. "When I saw that, I thought, 'If we get behind to these guys, we're in trouble.' Then we did fall behind, but they came back.

"They've surprised me a couple times. They haven't hung their heads at all. That's been a plus."

While sophomores have played a huge role, the four senior starters have been the backbone. Running back Garrett Brachbill has been explosive, with 273 yards and three touchdowns on 31 carries. Caleb Cloe and Keiffer Johnston have solidified the line. And Jordan Smith gives the Rams a big-play threat, with three 60-plus-yard TDs in the first two games -- one receiving, one rushing and one on a punt return.

"Smith has really good hands and he has a really good vertical, so he makes plays even when he's covered," Ramsey said. "He's the kind of kid who can turn a five-yard hitch into a touchdown. Between him and Garrett running as hard as he does, they've given us a lot."

While the group makes plays, it's not the ideal mix for a young team.

"Those guys have never had to lead before," Ramsey said of the seniors. "I wish they were better leaders. Caleb Cloe has stepped up the most in that regard, but we don't have a lot of it. And when you don't have a lot of senior leadership, you're fragile."

But what the group lacks in leadership, it makes up for in talent and determination.

Brachbill is one of the top wrestlers in the state, with a 121-14 record his first three years and a fourth-place finish at 126 pounds as a sophomore.

"Wrestling definitely helps me with being in shape and being mentally tough," Brachbill said.

Smith might be the best pure athlete in the conference, and could be the key to Shelbyville's success in the conference. He broke his collarbone as a sophomore, but emerged as a starter last year and put up good numbers (338 yards receiving, 7 TDs) playing behind several seniors.

"I learned right away you had to step up to the plate and prove you belong there," Smith said. "That was a challenge. But it was fun."

But they're not the only part of the leadership group that isn't back this year. Ramsey's longtime offensive line coach Mike Allen moved to Monticello and became part of Cully Welter's staff with the Sages. And offensive coordinator Brent Weakly took Ramsey's old job at A&M.

"I coached all those years where I had Gerald Temples, then Mike Conlin for 15 years, then I had Mike Allen and Weakly at A&M and also here," Ramsey said. "So this is something new for me -- instead of depending so much on the other coaches, I've had to do a little bit of everything."

But instead of being worn down by the extra responsibility in his 33rd year coaching, he said it's rejuvenated him. Ramsey considered retiring from coaching after his final season at A&M in 2012 and has often said he probably wouldn't coach much longer. But with a sophomore class he's genuinely excited about, don't make plans for Ramsey's retirement party yet.

"The guys we have on the coaching staff now are great, and this sophomore class is really good, but with new coaches and young players I had to go back to square one," Ramsey said. "I'm probably working harder than I have in a long time. But I'm having as much fun as I've had in a long time."

CLEVELAND — Justin Fields’ draft night drop ended outside the top 10 and ended up in a favorable opportunity to win right away.

Biggs: Bears paid a big price for Justin Fields, but it could be worth it

If Justin Fields turns into the kind of quarterback the Chicago Bears are hoping, the price paid to move up and acquire him will be more than worth it and quickly forgotten.

Chicago Bears single-game tickets to go on sale May 12

The Chicago Bears will begin selling single-game tickets for the 2021 season May 12, marking preparation for fans’ return to Soldier Field.

Winners and losers from the NFL draft

Two league sources told the Wisconsin State Journal on Thursday afternoon that Rodgers’ unhappiness has been festering for a while, despite Rodgers putting together his third MVP season last year.

Brett Favre’s advice to Aaron Rodgers: ‘You don't want to go out this way’

Given the level of acrimony Brett Favre sees between the Green Bay Packers and Aaron Rodgers — a familiar feeling, having been there himself in 2008 before being traded to the Jets — Favre isn’t betting on there being a happy ending.

Illinois offensive lineman Kendrick Green was selected by the Pittsburgh Steelers in the third round of the NFL draft Friday night.

With the NFL Draft starting Thursday, search the results of previous Packer picks. Search by round, name, school, position, year or any combination of these variables.