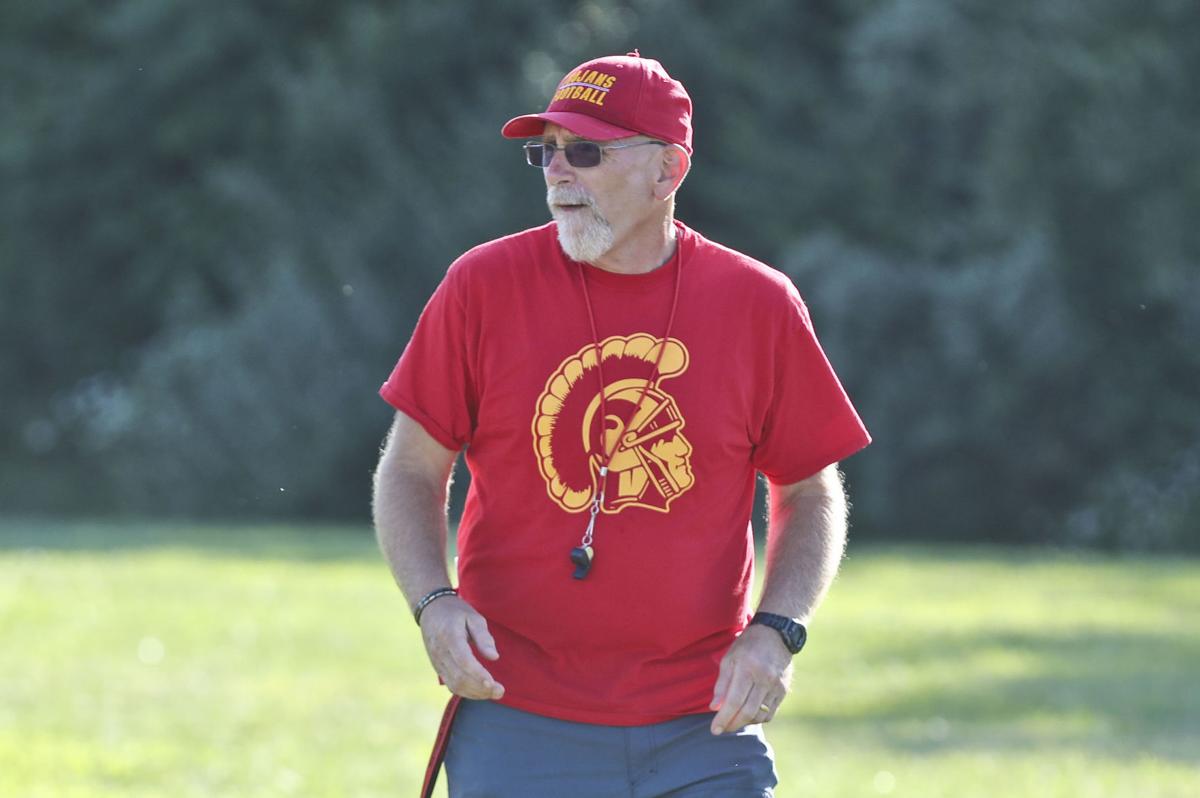 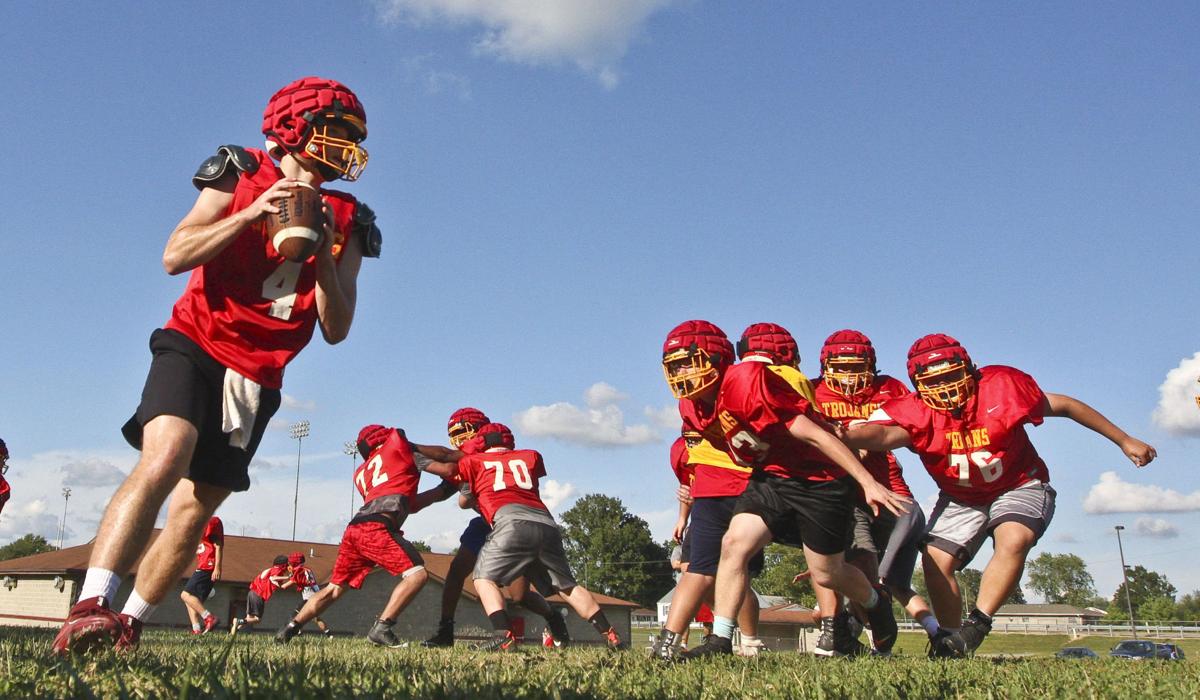 Quarterback Nick Cheney drops back for a pass on Thursday during practice for Charleston High School. More photos at www.herald-review.com 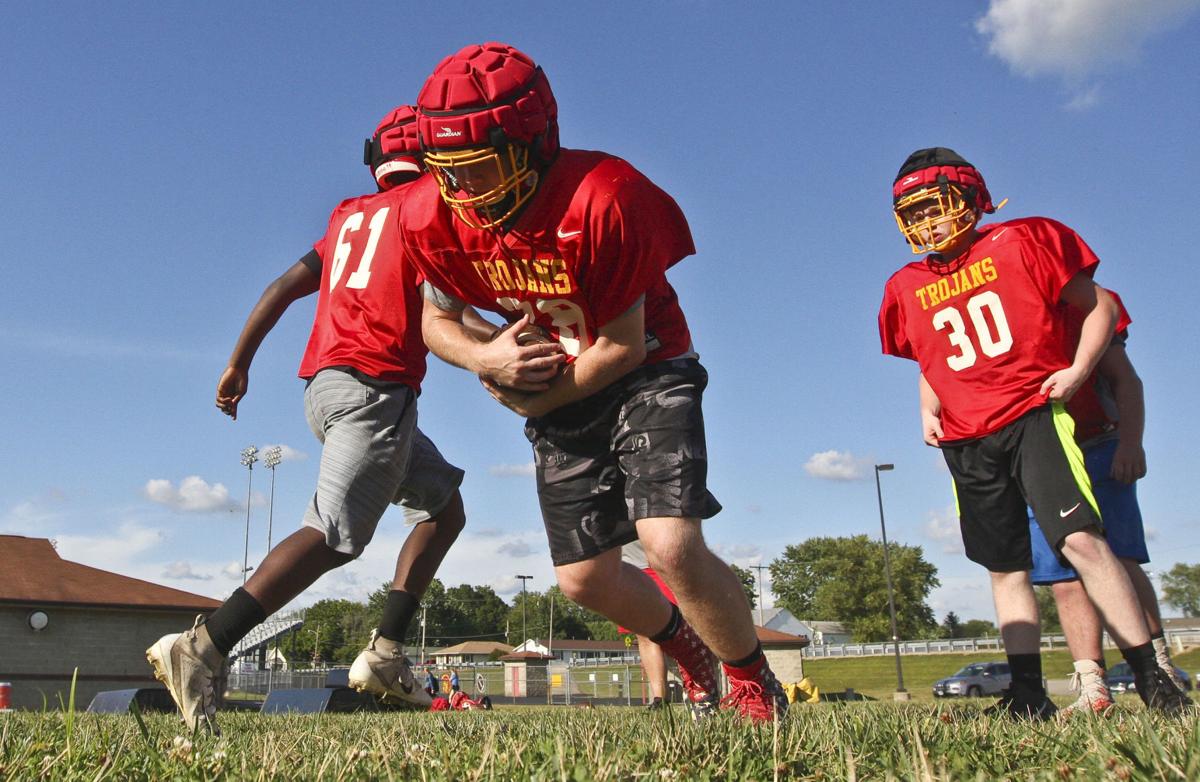 Running back Brayden Doyle goes through drills on Thursday during practice for Charleston High School. More photos at www.herald-review.com 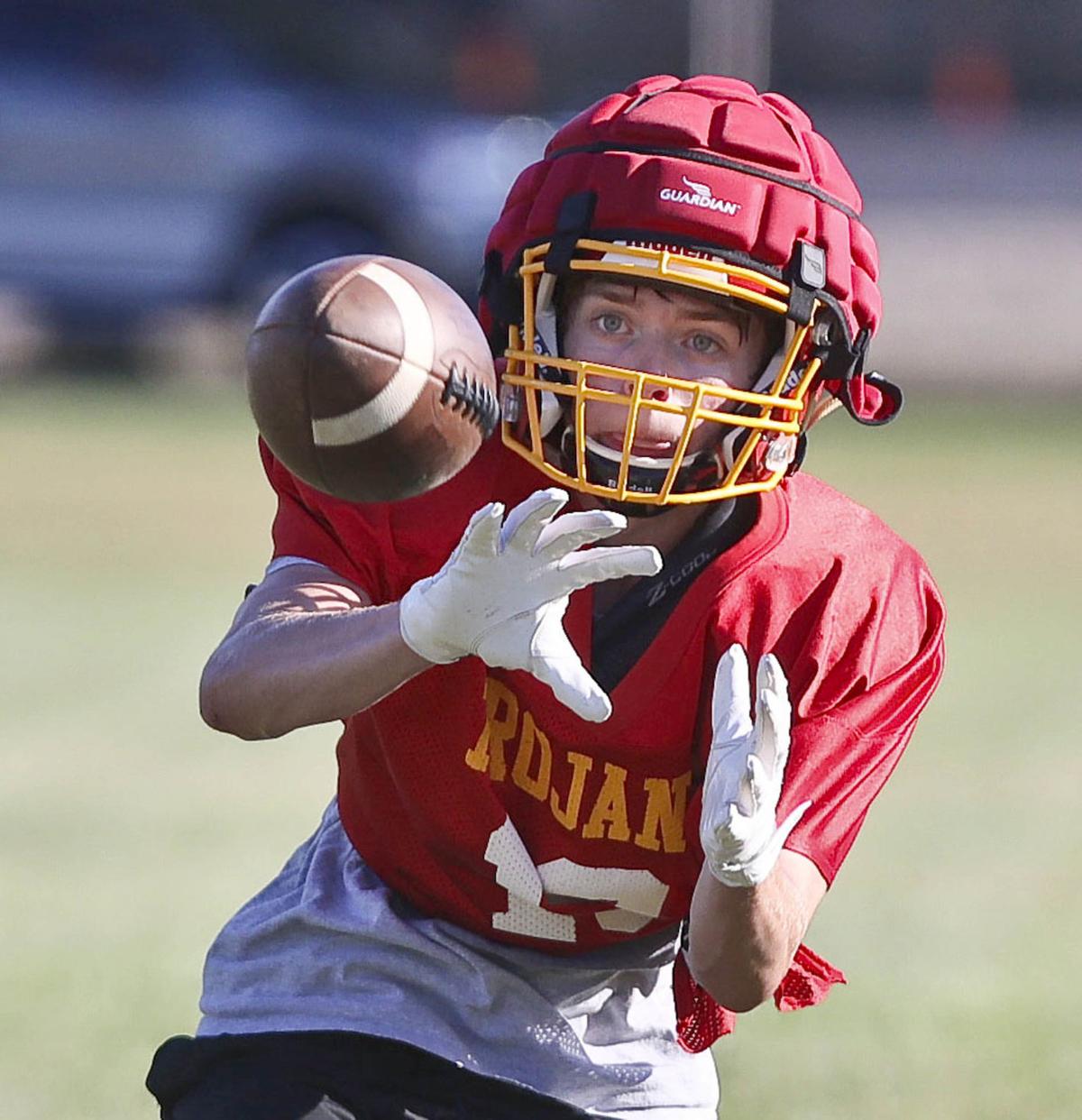 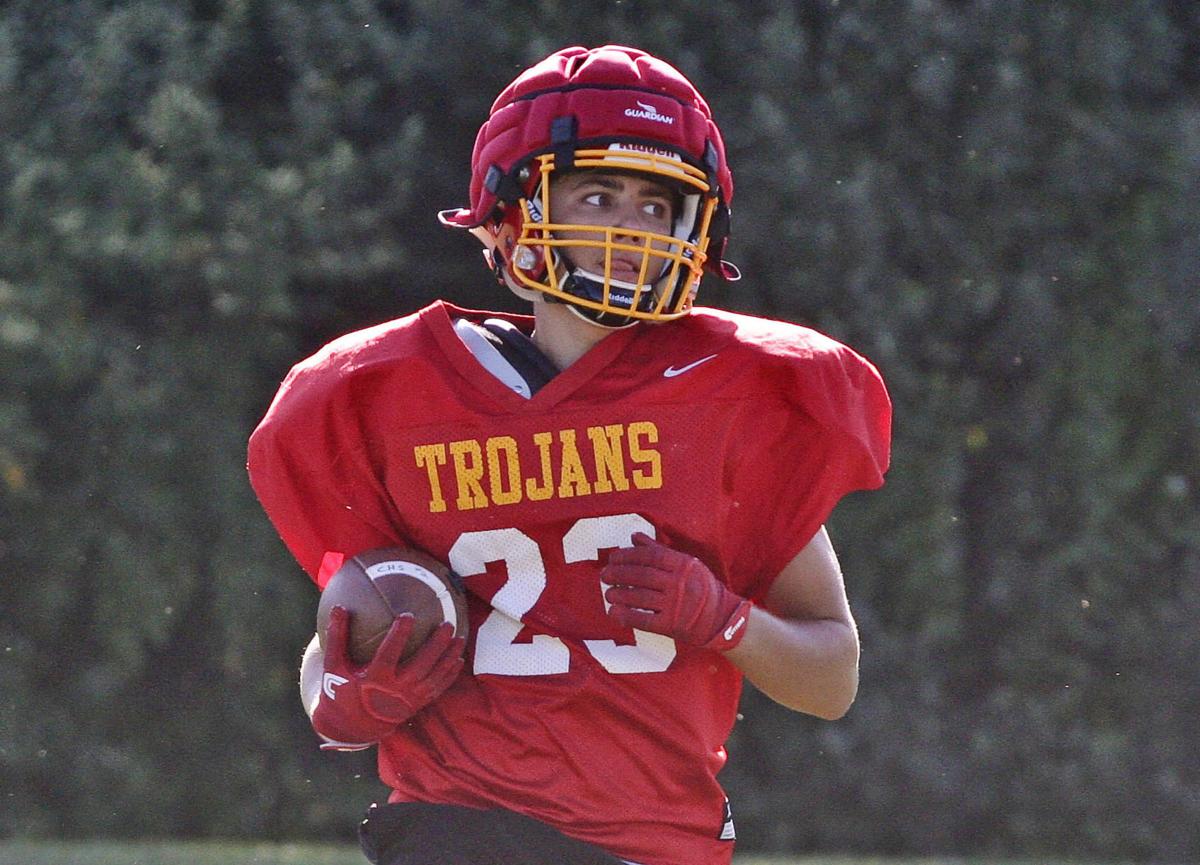 CHARLESTON — Jerry Payne’s Ford F150 sped along the interstate on a trek to visit his father in Missouri, coaching clinic webinar as the soundtrack. The first-year Charleston football head coach downloaded a few of them from Glazier Clinics for his ride, listening to all he could as he shaped his philosophy for the unenviable undertaking he signed himself up for and earned.

A particular catchy phrase from one of the webinars stood out: What’s important now?

Weeks later, he stood outside Charleston’s locker room and turned around to reveal that same mantra emblazoned on the back of his Dri-Fit T-shirt, each letter capitalized in Trojan gold occupying its own row.

Payne is tasked with re-engineering Charleston — currently stuck in a 19-game skid and without a win since October 2016 — into the prosperous program it has been during a few stretches of its history.

Charleston has more winless seasons (three) this decade than it has playoff appearances (two). The Trojans last made the postseason in 2012, also the last year they won the Apollo Conference. Before that came five playoff appearances in the 2000s and four each in the 1970s and 1980s. Winning here hasn’t always been an exercise in futility.

Payne did not adopt the appealing acronym because he took the job with lofty visions and dreams right away, though. Sure, those letters form the word that every player and coach strives for every game. But for now, it’s just something that sounds fun.

What’s actually important now? Gradual but consistent growth, Payne said. That’s a common coachspeak phrase that sometimes induces eye rolls, but it’s genuinely Charleston’s focus. When there’s no possibility of becoming any worse, well, what else could the objective be?

“Our goals,” Payne said, “are to get stronger, get better every day, be coachable and somewhere along the line...”

He paused for a fleeting second.

Payne does not deal in expected win totals. He says he’s impatient by nature, but this is one situation where he will adjust his habits.

“Everybody wants to win quite a few games, win a conference and go to the playoffs, but right now our goals have to be to keep getting better and stronger,” Payne said. “I have no grand delusions here. You’re not going to turn it overnight.”

Still, why would any coach willingly enter a situation like Charleston’s? It’s a herculean task two coaches have attempted in the last four years and left with next to no on-field success to show for their efforts.

Asked that exact question, Payne pointed to his coaching roots. He began in 1997 in Charleston’s Junior Football League, where he coached for 15 years. All he wanted to do was teach the game and watch his players grow. The team’s record took secondary importance.

“You’re in it for improvement,” Payne said. “When things started developing and it looked like this would come open, it was more me thinking, ‘What could I do to help these kids?’ Until last year, I had never been paid to coach. Never. I was here for the kids. Whether I was paid or not, I still would have applied for this job to help the kids.”

It’s a group he knows well. Payne spent last season as a Charleston varsity assistant and freshman team head coach. He was a varsity assistant from 2012-2014, took 2015 off and moved to Tri-County as a running backs and linebackers coach in 2016. In 2017, he stepped aside from coaching, thinking he was done for good.

Payne returned to Charleston’s school district in 2018 and became a history, sociology and psychology teacher at the high school. Eventually, he agreed to help then-varsity coach Tyler Hanner as an assistant. About two weeks before the opening game, though, Charleston’s freshman coach stepped aside. Hanner and Payne met, and a decision was made. Payne would coach the freshmen Wednesday through Friday of each week.

When Hanner resigned in January, Payne took the plunge and applied. He knew the team. He could empathize with the struggles. And he could lead the effort to forgetting all about it.

“We’re trying to build a program around the kids we have,” Payne said. “We’re trying to be as positive as we can and put positive things in their heads. They’ve been responsive. We have some guys who are pretty excited about being here.”

Charleston’s senior class arrived as freshmen in 2016. Since then, the Trojans have three wins. All of them came in that 2016 season. Since no senior is a four-year starter, each of them has won exactly zero career games. Payne knows this. He knows how such a burden can imbue itself in a teenager’s head. And he’s doing all he can to ensure permanent melancholy stays away.

“With all the changes, they keep pounding that into our head,” said senior wide receiver/defensive back Jordan Socarras. “It’s the only thing we can really think about.”

Added quarterback Nick Cheney: “We’re a different team. It’s a new year. You can’t think about the past.”

Every time Charleston players enter or exit the locker room, they stroll past two columns of numbers written in red marker on the cinderblock walls. They designate each year the program made the playoffs or won the conference since the 1970s. It’s an age-old reminder that winning has happened here before, and not too long ago.

The goal of adding to it, though, can be implemented in a later season.

“We want to win some games, but right now we just have to improve,” Payne said. “That’s what we’re out here preaching.”

CHARLESTON -- Tyler Hanner, a 1999 Charleston grad, turned in his resignation as head football coach according to Charleston athletics directo…

The IHSA allows fall sports to begin competition on Aug. 26.

It doesn’t matter what happened last season, how many seniors departed, or how tough the schedule may be. The purity and buzz of that first Friday night trumps all of that.

The Trojans earned the win with an improbable and incredible fourth-quarter comeback.

'We raised the bar.' Charleston rings in new era with a win and one tradition that had nearly gone missing

The Trojans made an exception for the tradition usually saved for home games - and hoped they didn't offend the neighbors.

'Two new teams going at it.' After Week 1 and a lot of changes, 2019 Coles County Clash offers higher sense of parity

This year’s Clash has the makings of one of its most competitive episodes since the 2012 re-ignition of the rivalry.

The Trojans won their first Apollo Conference game since 2016.

The Trojans cleanest and most convincing win of the year left little doubt of the overall direction they're heading.

Quarterback Nick Cheney drops back for a pass on Thursday during practice for Charleston High School. More photos at www.herald-review.com

Running back Brayden Doyle goes through drills on Thursday during practice for Charleston High School. More photos at www.herald-review.com