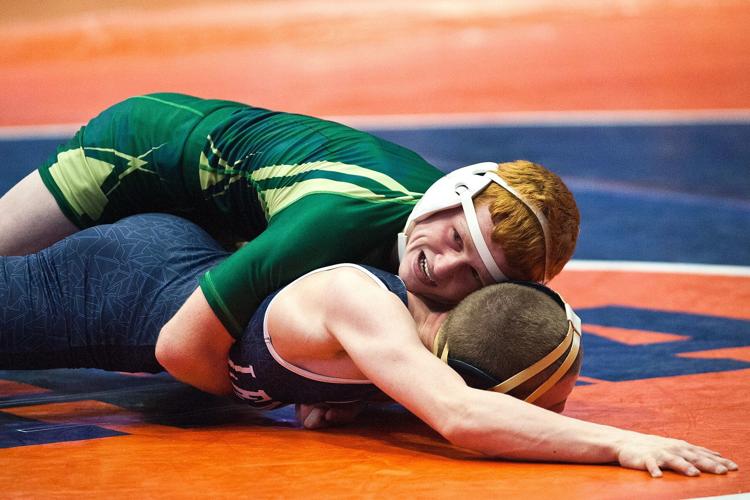 Mattoon's Brady Foster works for positioning against Lemont's Tyler Bentley during their 106-pound match in the Class 2A Dual Team State Tournament on Saturday at Grossinger Motors Arena in Bloomington. 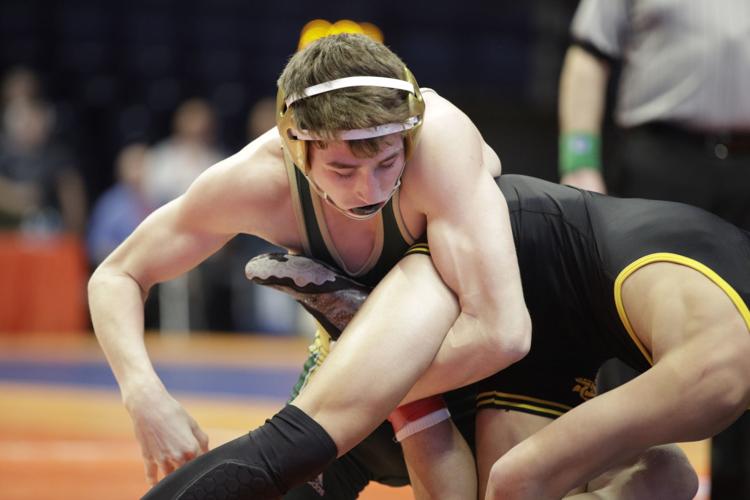 BLOOMINGTON -- Mattoon's wrestling team set new heights for the program this season and for Green Wave coach Brett Porter, the squad was something different for the long-time coach.

"Every year is different but to see the growth that this team has done is one of my proudest years. We just have a great group of kids and when they feed off each other and when they are able to put together great practices and reach their goals, it is a success," Porter said.

Mattoon advanced to the Class 2A state dual tournament quarterfinals for the first time in program history after defeating Troy Triad, 42-30, in Tuesday's sectionals. The Green Wave faced a strong Lemont team and lost 58-7 on Saturday at the Grossinger Motors Arena in Bloomington.

Porter knew defeating Lemont was going to be a long shot.

"I'm really proud of our guys today. Lemont out gunned us in pretty much every weight class and we knew what we were getting into when we got started," Porter said. "They are a very talented and very strong team that we faced. We set our goals to win four matches against that team. We were only to come away with two but I was pleased with the way the kids performed and how they finished the season."

"It was a great experience for them. Our whole Mattoon community sort of wrapped themselves around the boys and celebrated making it for the first time. To have a team make it this far in wrestling is a huge accomplishment for them and it was a fantastic season for them," Porter said.

The Green Wave (18-3) entered the quarterfinals on an 18 dual meet winning streak.

Said Porter: "To win 18 in a row and then do as well as they did in the state series individually, it was a great year to be with the Green Wave."

The future is bright for the Green Wave next season as the team's four state individual qualifiers -- sophomores Brady Foster (106) and Kiefer Duncan (132) and juniors Rick Wright (120) and Jeremiah Jones (138) -- all return.

"We are losing two talented seniors in Hayden Stanley and Gavin Jones but we have a really talented junior class with two guys who have been to state twice," Porter said. "I'm looking forward to see how they take over the leadership of the program and I know these guys are super excited to see what next year is going to bring and how they can get back to the dual and individual state tournaments.

Mattoon's Brady Foster works for positioning against Lemont's Tyler Bentley during their 106-pound match in the Class 2A Dual Team State Tournament on Saturday at Grossinger Motors Arena in Bloomington.