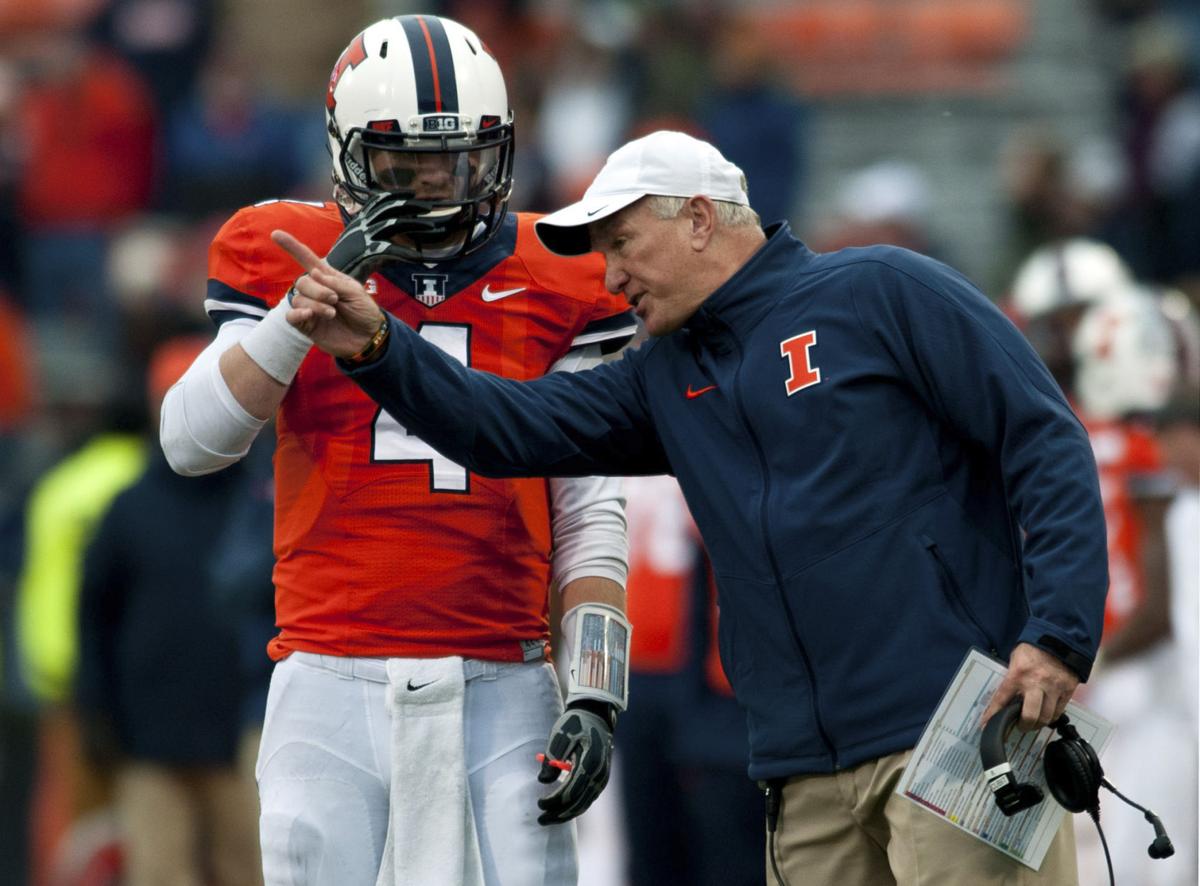 Interim head coach Bill Cubit has been a bright spot on the coaching staff, coaxing some production out quarterback Reilly O'Toole at the end of last season as offensive coordinator. But Cubit will have a lot more on his plate as head coach this year. 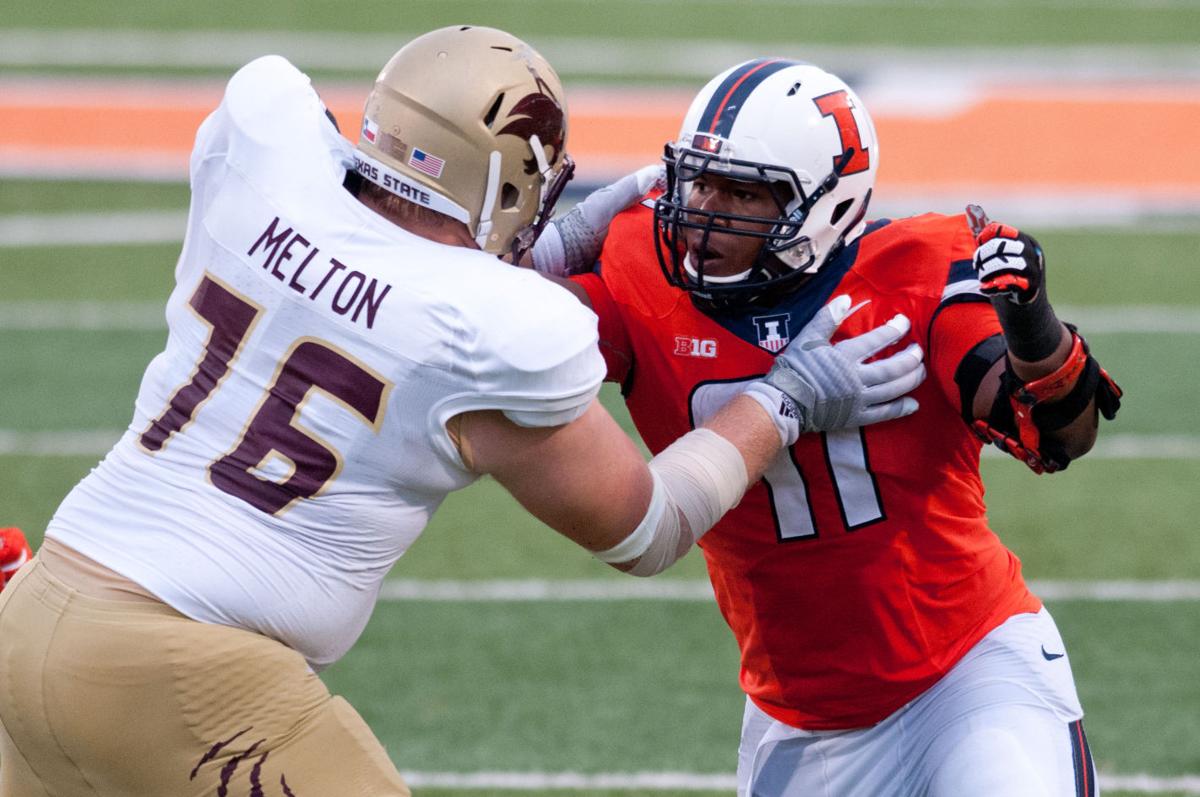 Illinois defensive end Dawuane Smoot leads what is likely the strongest unit on the team, particularly when Jihad Ward recovers from his injury.

CHAMPAIGN – The players and remaining coaches have been polite and patient and they’ve tried to say all the right things.

But since Tim Beckman was fired as Illinois’ head football coach last Friday, it’s clear only one thing will give them the relief they seek.

“I can’t wait to finally play a football game,” offensive lineman Ted Karras said this week after answering question after question about Beckman’s departure, the appointment of Bill Cubit as interim head coach and the affect it has in a team that feels like it has been dragged through a wringer.

“It’s been a little crazy but it is what it is,” Karras said. “But finally it’s game week. It’s time to go now. Everyone is on board with the changes. I’m excited to get on the field and put on a great show.”

Illinois opens the season Friday night after one of the most tumultuous off-seasons imaginable. Beckman had been under fire for much of his tenure since being hired in December of 2011, so it was not new for players to hear those rumblings.

But stunning accusations of player mistreatment leveled by a former player this spring led to an full-blown investigation into the program, which led to AD Mike Thomas’ abrupt decision to fire Beckman exactly one week before the opener.

Ready or not, with Cubit in place and despite a week filled with shock, chaos and changes, Illinois takes the Memorial Stadium field at 8 p.m., Friday against Kent State.

Here are five questions, the answers to which should determine if the Illini can win enough to put some of these unpleasant memories behind them:

Q: What is the “Cubit Factor?” Will Illinois look and play differently with the former offensive coordinator running the whole show?

A: Initially, signs are positive. The players have liked Cubit since he arrived in 2013 after Beckman’s first try at organizing an offensive staff failed. Cubit had been head coach at Western Michigan for eight seasons and put together a 51-47 record that included a victory over Illinois in 2008.

Even the defensive players see a coach they can warm to and Cubit spent much of this week giving closer attention to the defense.

“I’m basically a cheerleader over there,” Cubit said. “I’ve been an encourager. I’ve wanted those guys to see me and know that I care and I’ve made a couple of suggestions. But I’m more or less letting those defensive guys (co-coordinators Tim Banks and Mike Phair) do it.”

Cubit is a more outwardly emotional coach than Beckman was. He said to expect some heavily charged pre-game speeches because Cubit believes this team needs an extra dose of love given what its been through.

On special teams, he said he has tried to simplify things, hoping that basics done well will produce better results than tricks and gimmicks.

Offensively, he’ll delegate more to his son, quarterbacks coach Ryan Cubit, with whom he has coached and worked for many years.

And it goes without saying there will be no more sideline bickering between Bill Cubit and the head coach, as happened wheh Beckman wanted Cubit to be more conservative in his play-calling.

A: That’s been the No. 1 question all along, regardless of who the head coach is.

When healthy and on the field, Lunt is one of the better passers in the country. He threw 14 touchdown passes and just three interceptions while completing 63.5 percent of his throws last season, and that was without a reliable running game.

A broken leg derailed his season and even though Illinois made it to a bowl game with backup Reilly O’Toole filling in, Illinois no longer has the luxury of an experienced senior to lean on if Lunt goes down.

This season it’s redshirt freshman Chayce Crouch, who’s more of a running threat than a passing threat, and a pair of true freshmen, Jimmy Fitzgerald and Jeff George, Jr., who aren’t ready.

Illinois could return to a bowl game and could pull a notable upset or two if Lunt can stay healthy. But he’s never made it through a complete season without significant injury and Illinois’ prospects without him are bleak.

Q: Will the defense finally be able to hold its own against Big Ten opponents?

A: Illinois has struggled consistently the past three seasons, although a late resurgence last season can be traced to a defense that finally improved.

Illinois won three of its final five games in 2014 after it made headway stopping the run and generating turnovers.

Illinois beat Penn State when it held the Nittany Lions to 265 total yards. And it won at Northwestern to clinch a bowl bid when it generated five turnovers.

Co-coordinator Tim Banks thinks there will be a carryover and on paper this is easily the most experienced defense in the last four seasons.

“Guys we’ve recruited trust us and know us,” Banks said. “We’ve been consistent in our teaching. They know what the expectation is and that’s important.”

Despite some training camp injuries, Banks likes what he has on the defensive front, especially since it appears big defensive end Jihad Ward shouldn’t miss much time following an arthroscopic procedure on his knee.

“I feel good with what I see,” Banks said. “It gives me chills to think we played with these same guys when they were 20 pounds lighter and 40 to 50 pounds weaker.

“We still have to go out and get it done, but I finally feel like we have the players to do that.”

Chunky Clements and Rob Bain will anchor the middle of the defensive line and Dawuane Smoot will open at defensive end until Ward returns.

The pass rush should be improved because Illinois’ secondary, its best in some time, now starts three seniors and a junior and should be able to cover well enough to prevent quick strikes.

Q: Kicking field goals and extra points was an unpleasant adventure last season. Is there reason for hope this year?

Punting was a plus last season with Justin DuVernois averaging 44.0 yards per boot. This year Ryan Frain gets the job. He punted just once last year, for 34 yards.

Q: Which true freshmen will play?

A: The best bets going into the opener are running back Ke’Shawn Vaughn from Tennessee, wide receivers Sam Mayes from Texas and Desmond Cain from Florida and defensive lineman Jamal Milan from Chicago.

The coaches love offensive lineman Gabe Megginson from Jacksonville but they’d prefer to redshirt him, knowing players are better in their fifth season than their first.

Everything you need to know about Illini football

Illinois opens the season Friday night after one of the most tumultuous offseasons imaginable. Ready or not, with Bill Cubit as head coach and…

Illini expand to a global audience

CHAMPAIGN – The University of Illinois has had attendance issues in recent years, but this season it’s taking a unique approach to cultivate a…

CHAMPAIGN – Illinois’ new head football coach showed up Monday with a sport coat, a bundle of passion, a promise for the fans and a tear in his eye.

The saga of Illini Football: head coaches through the years

Take a look back at the past 15 coaches who have led the University of Illinois football team.

Interim head coach Bill Cubit has been a bright spot on the coaching staff, coaxing some production out quarterback Reilly O'Toole at the end of last season as offensive coordinator. But Cubit will have a lot more on his plate as head coach this year.

Illinois defensive end Dawuane Smoot leads what is likely the strongest unit on the team, particularly when Jihad Ward recovers from his injury.