PARIS — Thinking of her late coach the whole time, Barbora Krejcikova went from unseeded to Grand Slam champion at the French Open.

Putting aside a shaky set, Krejcikova won just her fifth major tournament as a singles player by beating 31st-seeded Anastasia Pavlyuchenkova 6-1, 2-6, 6-4 in the final at Roland Garros on Saturday.

When it ended with Pavlyuchenkova's backhand landing long on the fourth match point for Krejcikova, a 25-year-old from the Czech Republic, they met at the net for a hug.

Then Krejcikova blew kisses to the sky, her eyes squeezed shut, in a tribute to her former coach, Jana Novotna, the 1998 Wimbledon champion who died of cancer in 2017.

"Pretty much her last words were just enjoy and just try to win a Grand Slam. I know somewhere she's looking over me," Krejcikova told the crowd at Court Philippe Chatrier, limited to 5,000 people because of the coronavirus pandemic.

"She was such an inspiration for me. I just really miss her," Krejcikova said. "I hope she's happy right now."

She is the third unseeded women's champion in the last five years at Roland Garros.

Krejcikova now will try to become the first woman since Mary Pierce in 2000 to win the French Open singles and doubles titles in the same year. Krejcikova and partner Katerina Siniakova already own two Grand Slam doubles titles and are scheduled to play in the final of that event Sunday.

The 31st-seeded Pavlyuchenkova was playing in her first Grand Slam final in the 52nd major tournament of her career.

She was treated for a left leg injury late in the second set Saturday.

This was only the second WTA singles title for Krejcikova, but they have come in her past two tournaments. She won the trophy on clay at Strasbourg, France, last month and is now on a 12-match winning streak.

She is the sixth consecutive first-time Grand Slam champion to collect the trophy at Roland Garros, where the red clay can diminish the effectiveness of speedy serves and the sometimes odd bounces on a surface that can frustrate players and demands particular footwork.

Saturday's matchup between two first-time Grand Slam finalists was perhaps a fitting conclusion to a two weeks filled with surprises.

Naomi Osaka, a four-time major champion seeded No. 2, withdrew after one match — and a conflict with Grand Slam officials over a rule that mandates speaking to the media — to take a mental health break. No. 1-ranked Ash Barty, the 2019 champion, retired from her second-round match with a left hip injury. No. 3 Simona Halep, the 2018 champion, never showed up because of a hurt calf. Serena Williams was beaten in the fourth round. Defending champion Iga Swiatek lost in the quarterfinals.

Krejcikova spoke frankly earlier in the tournament about her feelings of stress and panic before heading out to face 2017 U.S. Open champion and 2018 French Open runner-up Sloane Stephens in the fourth round.

Krejcikova said she worried she wouldn't win a game and was in tears, not wanting to even play the match, before her sports psychologist talked her through it.

Good thing, too, because Krejcikova beat Stephens 6-2, 6-0. That went alongside wins over No. 5 seed Elina Svitolina and No. 24 Coco Gauff, a 17-year-old American, before Krejcikova saved a match point in the semifinals and edged No. 17 Maria Sakkari 9-7 in the third set.

There were some jitters apparent in the opening game Saturday: Krejcikova double-faulted twice and got broken.

But she snapped out of it right away.

Krejcikova excelled with her crisp two-handed backhand, net skills honed in doubles and particularly good use of defensive lobs. One curled over Pavlyuchenkova and landed right in a corner for a winner that helped Krejcikova break to 1-1 and begin a six-game run that gave her the first set. Another was dumped into the net on an overhead attempt by a backpedaling Pavlyuchenkova.

But Pavlyuchenkova regrouped and went up 5-1 in the second set. But that's when she stretched for a backhand, winced and leaned on her racket while reaching for her upper left leg.

At the ensuing changeover, she took a medical timeout. A trainer treated and taped the leg while Pavlyuchenkova was laying face-down on a towel, a bag of candy within reach.

Right away, Pavlyuchenkova claimed that set. While Krejcikova took a lengthy trip to the locker room before the third, Pavlyuchenkova stood on the sideline pantomiming a serving motion to practice landing on her left leg.

Pavlyuchenkova saved two match points while serving at 5-3, and Krejcikova wasted another by double-faulting in the next game.

But she won it on the following chance and soon enough was kissing the Coupe Suzanne Lenglen and gently rocking the trophy during the Czech national anthem.

Is Sean Payton an early frontrunner for Coach of the Year?

Tailgating, face-painted fans back in force at NFL stadiums

Tailgating, face-painted fans returned in full force at stadiums around the country as the NFL opened its doors to capacity for the first time since the coronavirus pandemic.

Results from all of Sunday's NFL Week 1 games

Blues 'tryout' players hoping to get noticed in Traverse City

Ten of the 25 players on the St. Louis Blues' prospects squad are not part of the organization — a larger number than usual.

Is Sean Payton an early frontrunner for Coach of the Year? 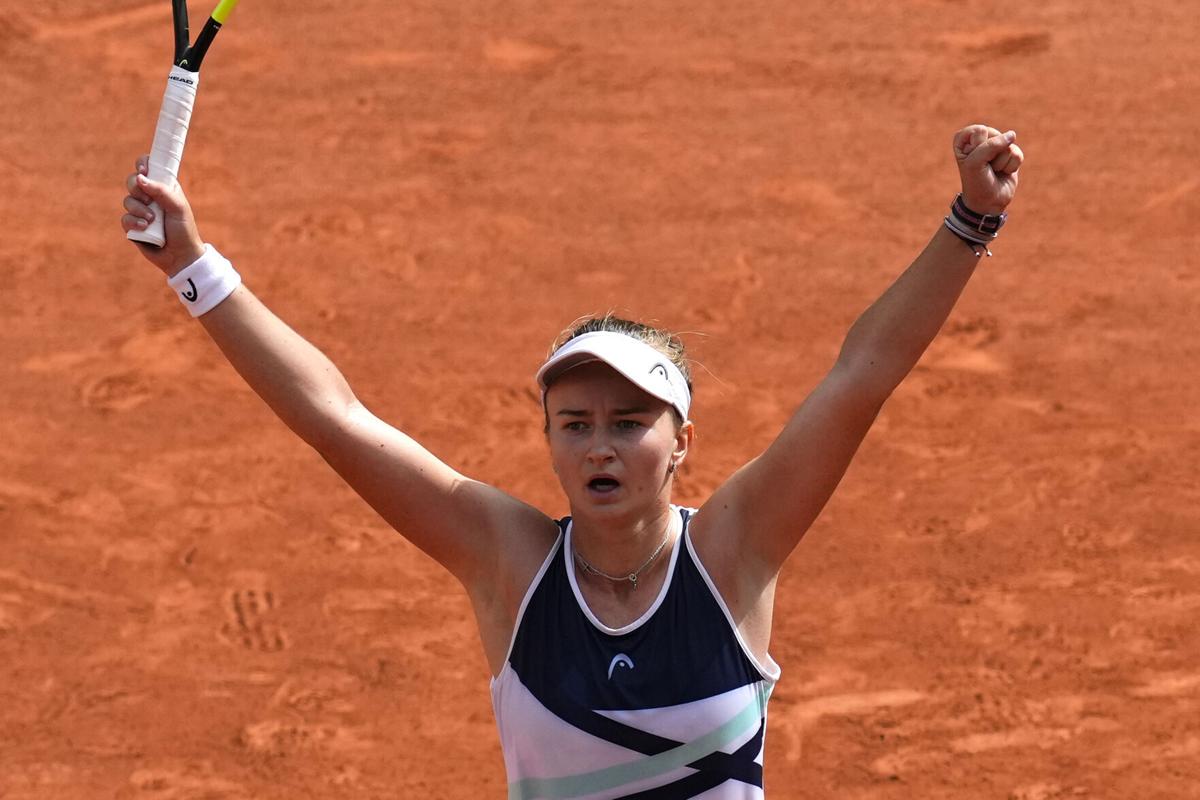 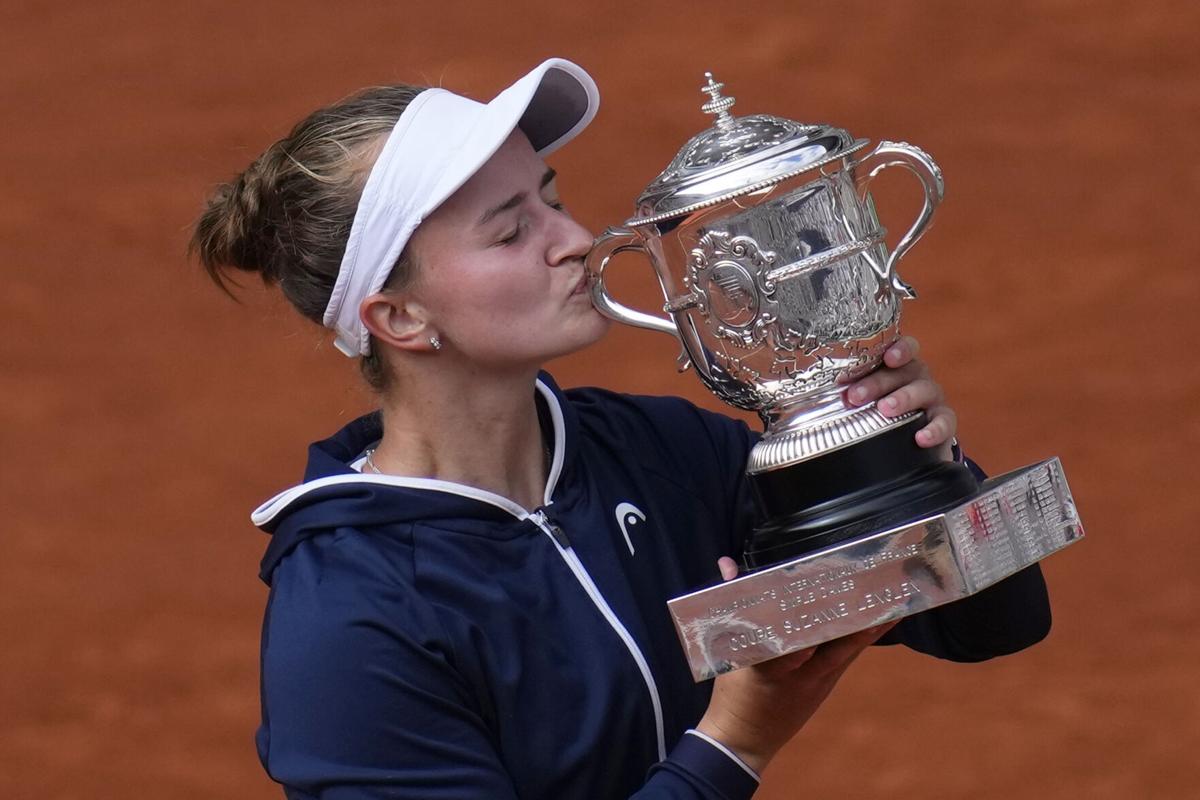 The Czech Republic's Barbora Krejcikova kisses the cup after defeating Russia's Anastasia Pavlyuchenkova in the final of the French Open tennis tournament Saturday in Paris.