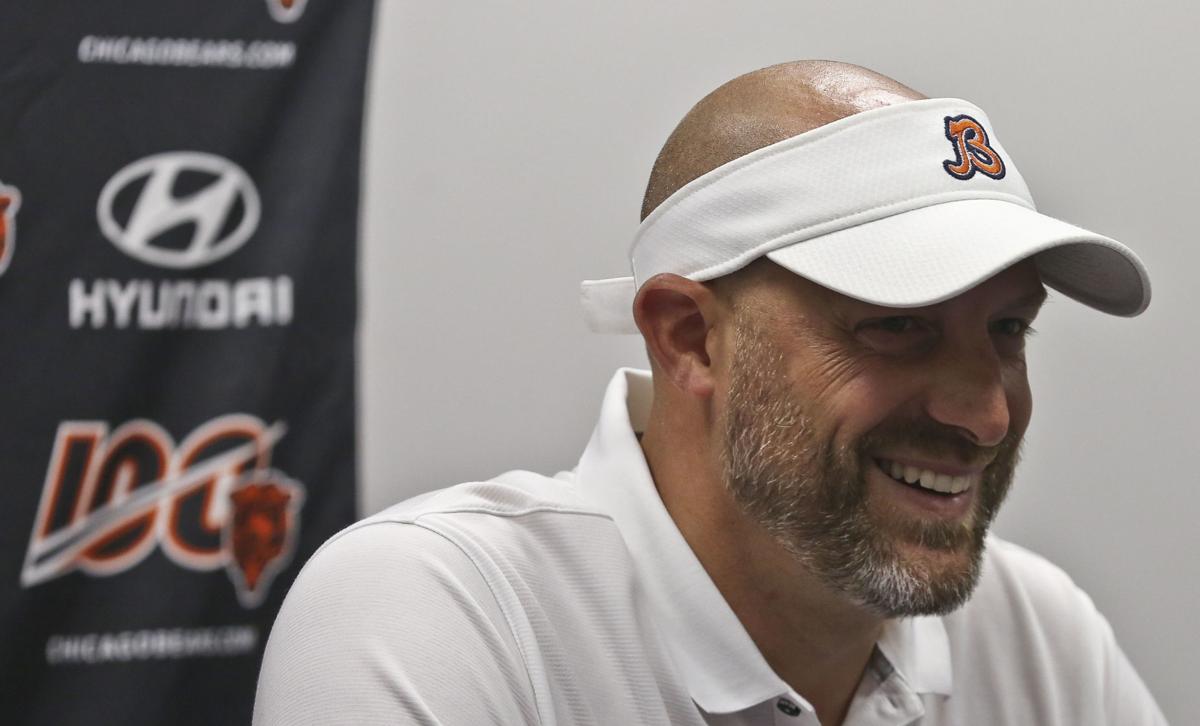 Chicago Bears head coach Matt Nagy talks with media during a July press conference at the Decatur Civic Center, where he was part of an event celebrating the team's birthplace at the Decatur Staleys. 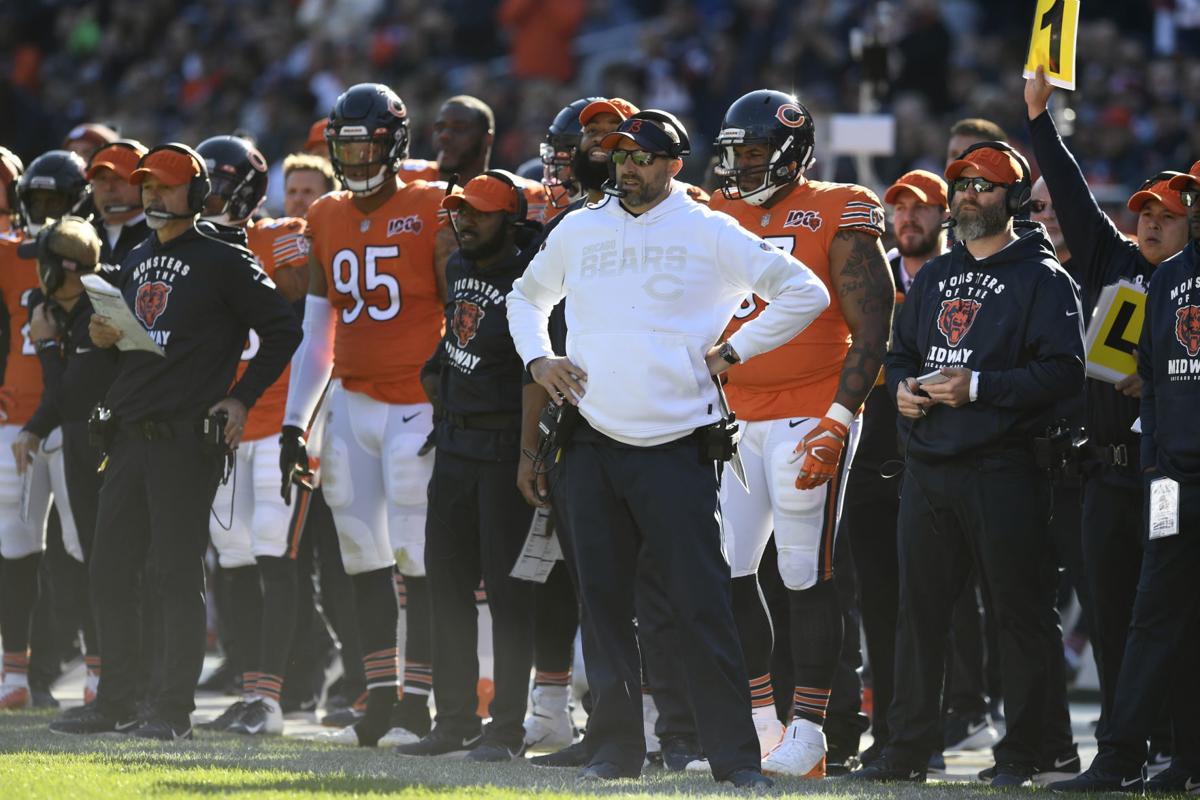 Bears head coach Matt Nagy, center, watches from the sideline during the second half of Sunday's game against the Chargers in Chicago. San Diego won, 17-16, after kicker Eddie Pineiro missed a 41-yard field goal attempt as time expired.

The Bears wrapped up their week of practice Friday at Halas Hall as they get ready to face the Lions on Sunday at Soldier Field.

Here are four things we heard from the Bears this week.

1. Matt Nagy thinks tight end Trey Burton is still not 100% because of injury.

Burton, who plays the “U” tight end in Nagy’s offense, missed the opening loss to the Packers with a groin injury, something separate than the injury that kept him out of last season’s playoff loss and required offseason sports hernia surgery.

He played in the next seven games but has totaled just 14 catches for 84 yards after grabbing 54 for 569 yards in 2018. In Sunday’s loss to the Eagles, he was targeted only once while playing 27 snaps (61%) and didn’t have a catch for the first time this season.

Nagy said he thinks Burton has been playing better each week despite the lingering injury, but he acknowledged the tight end’s production hasn’t been where the Bears want it.

“Do I think he’s 100% yet? No, I don’t,” Nagy said. “There’s some opportunities that we’ve had here or there, but it hasn’t been nearly as much as we want it to. Between everything else that’s going on, that’s definitely a part that we would like to improve at.”

Nagy said it hasn’t gotten to the point where the Bears considered sitting Burton to help the injury heal.

“That’s not where I feel like where we’re at,” he said. “But we always want to keep an eye on guys and we watch if there’s a guy that might be playing a little bit slower than we want him to.

"You always have to look at it, at least we do, where if somebody’s on the field, is the defense concerned? That’s how they’re looking at it.”

2. Khalil Mack wasn’t much for reminiscing about last year’s success against the Lions.

That was a tactic for Nagy and the Bears offense this week as they try to help Mitch Trubisky recapture some of his positive play from his game against them last season.

Mack, however, said the defense can’t think about the success it had last season against Lions quarterback Matthew Stafford, who threw four interceptions in two games -- both Bears victories. In his 11th season, Stafford is having one of the best seasons of his career.

“You can talk about last year all day, but that ain’t really going to have anything to do with what happens on Sunday,” Mack said. “You’ve got to do everything it takes to keep him on the bench because he’s a good quarterback and he’s got a lot of weapons. Those two receivers (Marvin Jones and Kenny Golladay), I mean, they’ve got a special group, and there’s going to be a great task for us.”

3. Matt Nagy lauded wide receiver Taylor Gabriel for his growth over the last season and a half.

The Bears coach said he counted Gabriel’s work as a “true pro’s pro in every aspect” as a positive in a season that hasn’t had many highs for the offense.

Gabriel has 17 catches for 238 yards and three touchdowns and has been one of the biggest explosive-play threats for Trubisky. That included a 53-yard catch Sunday against the Eagles.

Offensive coordinator Mark Helfrich added to the praise for the sixth-year wide receiver.

“He’s matured and realized his role in a way, but then kept pushing and kept competing for more,” Helfrich said. “He’s continued to show up in positive ways all over the place -- blocking, playing without the ball is always something we stressed with him last year, and he’s continued to buy into that. His best ball is still ahead of him.”

Goldman practiced in full Friday after suffering a thigh injury against the Eagles, but the Bears still listed him as questionable.

Outside linebacker Isaiah Irving has been ruled out with a quad injury.

Stafford is listed as questionable with hip and back issues, but he hasn’t missed a game since the 2010 season.

Column: As hope fades for the Bears’ 100th season, it might be time for the McCaskey family to sell the team

Chicago Bears head coach Matt Nagy talks with media during a July press conference at the Decatur Civic Center, where he was part of an event celebrating the team's birthplace at the Decatur Staleys.

Bears head coach Matt Nagy, center, watches from the sideline during the second half of Sunday's game against the Chargers in Chicago. San Diego won, 17-16, after kicker Eddie Pineiro missed a 41-yard field goal attempt as time expired. 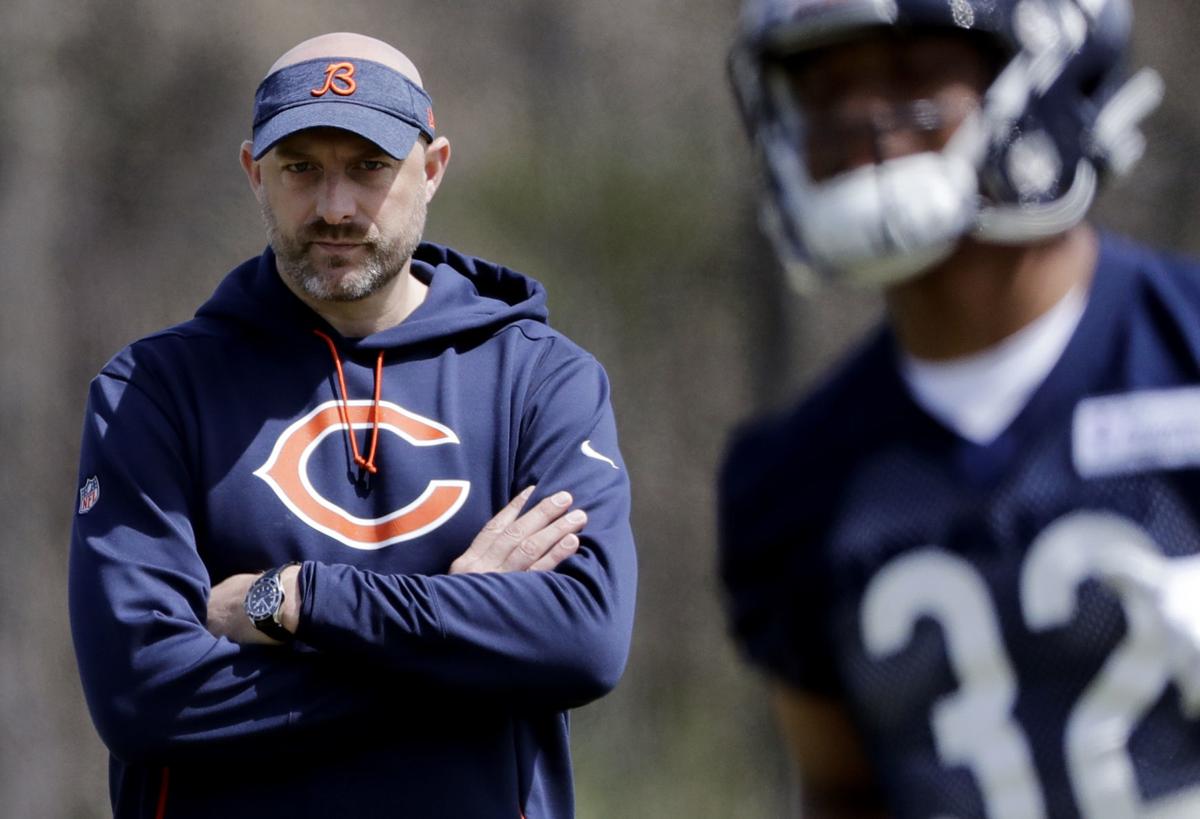