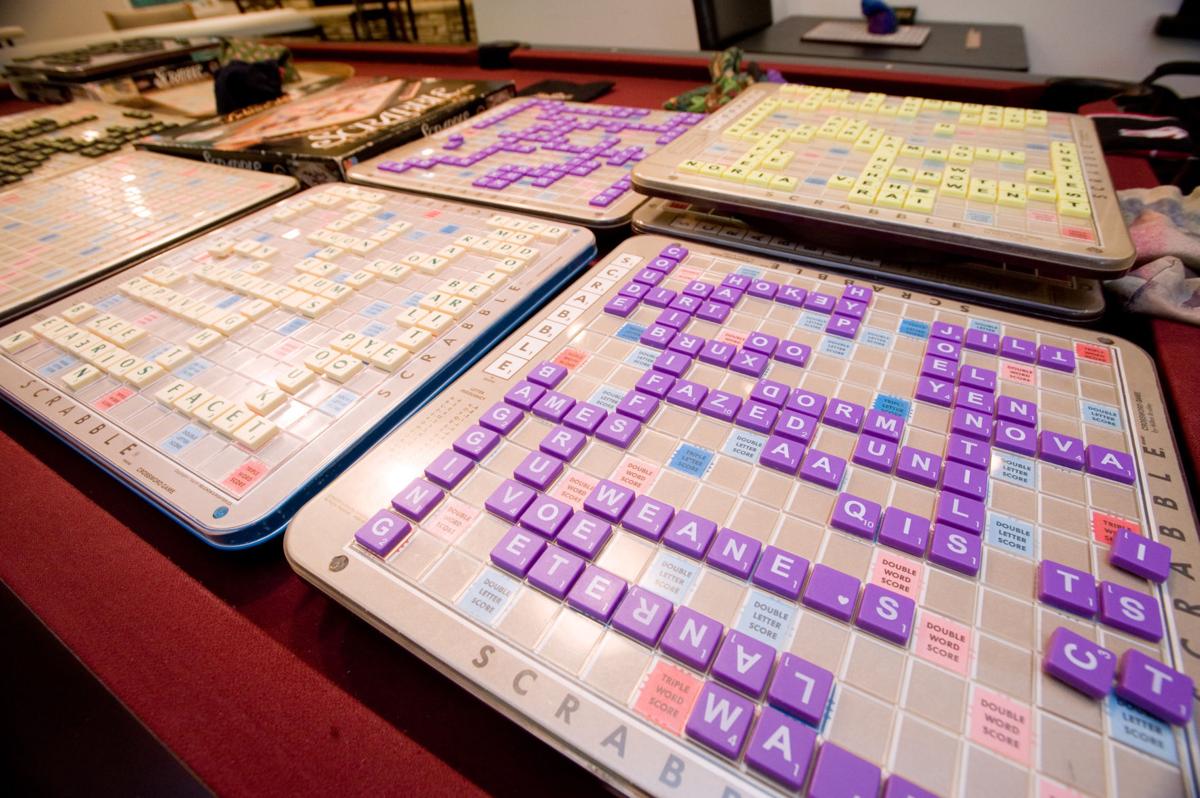 Scrabble boards at Marty Gabriel's residence in Charleston on Wednesday. 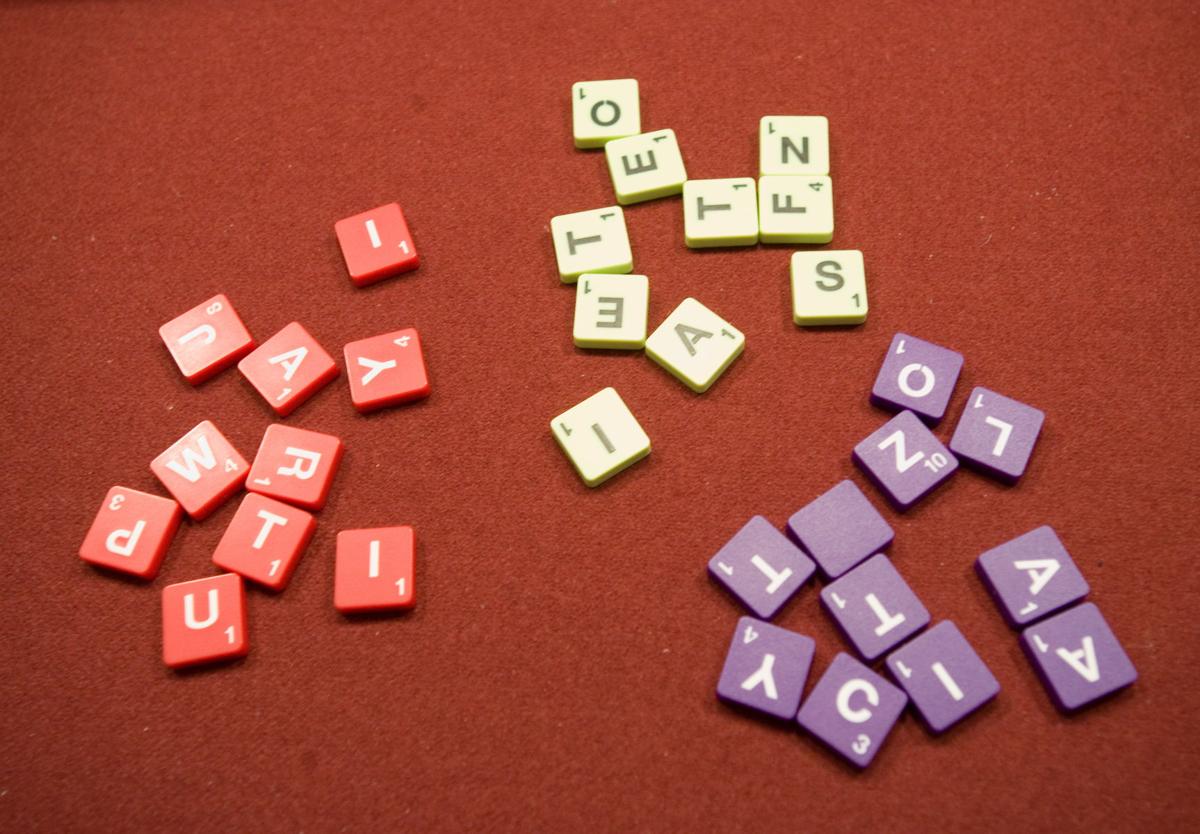 Scrabble pieces at Marty Gabriel's residence in Charleston on Wednesday. 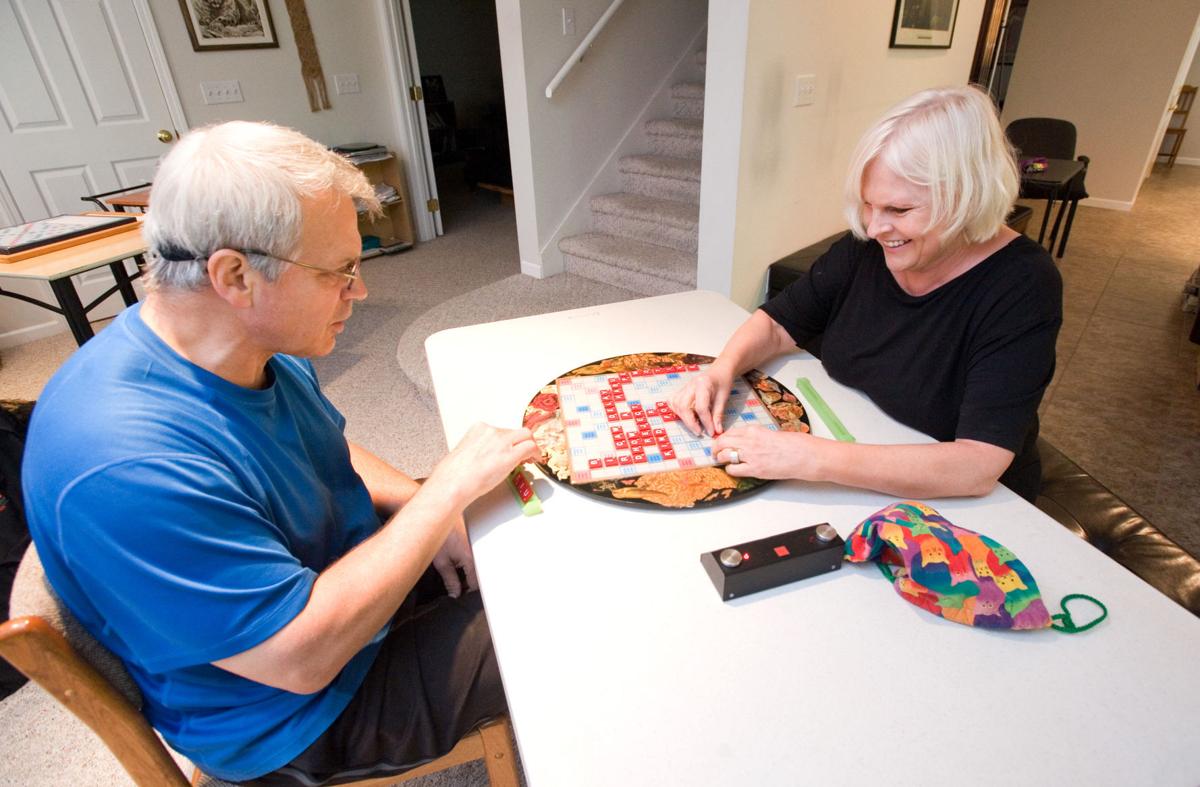 Marty Gabriel, left, and his wife, Diva Markelis, right, play a game of Scrabble at their residence in Charleston on Wednesday. 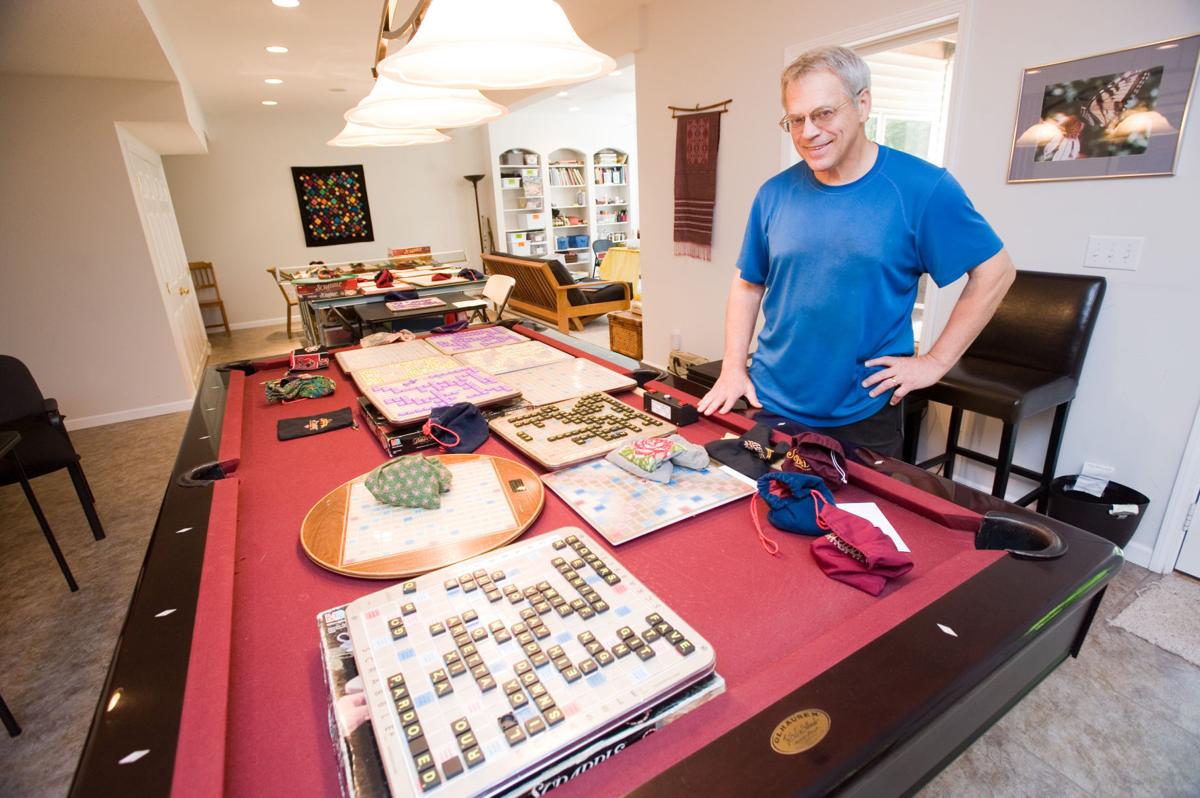 Marty Gabriel with some of the Scrabble boards at his residence in Charleston on Wednesday.

CHARLESTON -- Marty Gabriel of Charleston and Scott Garner of Memphis, Tenn. are not messing around when it comes to Scrabble and 276,000 words that are included in the Scrabble dictionary.

Approximately 50 Scrabble boards covered in the small lettered-tiles for the game laid across the various surfaces of Gabriel’s basement including his pool table and couch Wednesday.

This was the aftermath of one of several practice attempts at breaking a Scrabble Guinness World Record: Highest Scrabble score in 24 hours between two players. The two have practiced for two years to break the current record kept by Lakshan Wanniarachchi and Yeshan Jayasuriya, both of Sri Lanka, who tallied a score of 196,525, according to Guinness World Records.

Now, with more than 1,100 games played this year alone in preparation for their official attempt, Gabriel and Garner will seek to demolish that record playing from 9 a.m. Sunday until 9 a.m. Monday upstairs in the Charleston County Market.

The two will continue to play game after game rotating five Scrabble boards and only stopping for restroom breaks.

Garner, a Greek and Roman Studies professor at Rhodes College in Memphis, said the idea sprung to Gabriel, a retired social worker, and himself two years ago after reading about another pair who attempted to break it in Britain. While they technically did break the current record, the United Kingdom pair’s camera that was recording the event malfunctioned during some of the games played, which were not able to be counted.

“We are going to have two video cameras to make sure it all works,” Gabriel said.

Gabriel said they will basically have to have gotten 2 to 3 points a second within the upcoming 24 hours to beat the current standing record, which he continued they could do and have done. Unofficially in previous practice attempts at beating the score, he said they have beat it three times.

Through practices, they have been learning to focus more on finding good play instead of taking more time to find the best plays.

Please log in to keep reading.
Enjoy unlimited articles at one of our lowest prices ever.

“Spending that extra time just isn’t worth it in the long run,” Garner said.

Also, it is important to them to make sure the board remains “open” for one another to score big plays. Gabriel said in the roughly 220 games they will likely play, it will not be about competing against each other but with each other.

The practicing has been steadily ramping up over the past two years. Garner said more and more they have been playing more games at a time.

But it is worth it, Gabriel said. Both developed a passion stemming from similar game, Boggle, which they played when they were younger.

Gabriel got into Scrabble around 20 years ago. While his interests when he was younger, and even still today, laid with sports and other physical activities, they did not for his wife, when they were dating. In a search for common game to play, they landed on Scrabble.

From there, his interest in the crossword-like board game grew beyond a hobby to an attachment, as he found that it induced similar feelings he would get from playing sports.

“To me, it is like the same kind of excitement I would get playing sports,” Gabriel said. “I like to be in those spots where I am making decisions all of the time. In this, you are making decisions constantly.”

Garner developed an interest later, getting really involved in the Scrabble-life in 2007 when he originally taught in Urbana-Champaign.

“I had played Boggle for years, but much of my playing of that game had moved online, and I wasn’t a very good typist,” Garner said. “So, I considered the possibility of playing Scrabble. Through a little searching online, I learned that there was a local Scrabble club that met weekly, and I’ve been playing ever since.”

Along with attempting to break a record, they will also be raising money for the Sexual Assault Counseling and Information Service in Charleston through a pledge drive during the event.

SACIS along with other services in the state have struggled to continue service without state funding, he said. Volunteers will be accepting donations and pledges upstairs in the County Market. More information on SACIS can be seen on their website at www.sacis.org.

Actress and St. Louis native Ellie Kemper issued the apology after critics last week noted she was named queen of the ball in 1999.

The lack of an activated siren likely played a role in a collision involving an ambulance last week near Sarah Bush Lincoln Health Center.

Blue Cross and Blue Shield of Illinois will hold a job fair at noon-2 p.m. Wednesday on the patio at its new Mattoon facility, 201 Coles Centre Parkway

The Mattoon Police Department made this domestic battery and methamphetamine charge arrest on May 25.

Coles County and many surrounding areas won’t see many cicadas this year.

Tombstone, dating back to 1943, left on doorstep of Mound Cemetery office.

The Mattoon Police Department made the arrest in this child pornography possession case Friday afternoon.

Scrabble boards at Marty Gabriel's residence in Charleston on Wednesday.

Scrabble pieces at Marty Gabriel's residence in Charleston on Wednesday.

Marty Gabriel, left, and his wife, Diva Markelis, right, play a game of Scrabble at their residence in Charleston on Wednesday.

Marty Gabriel with some of the Scrabble boards at his residence in Charleston on Wednesday. 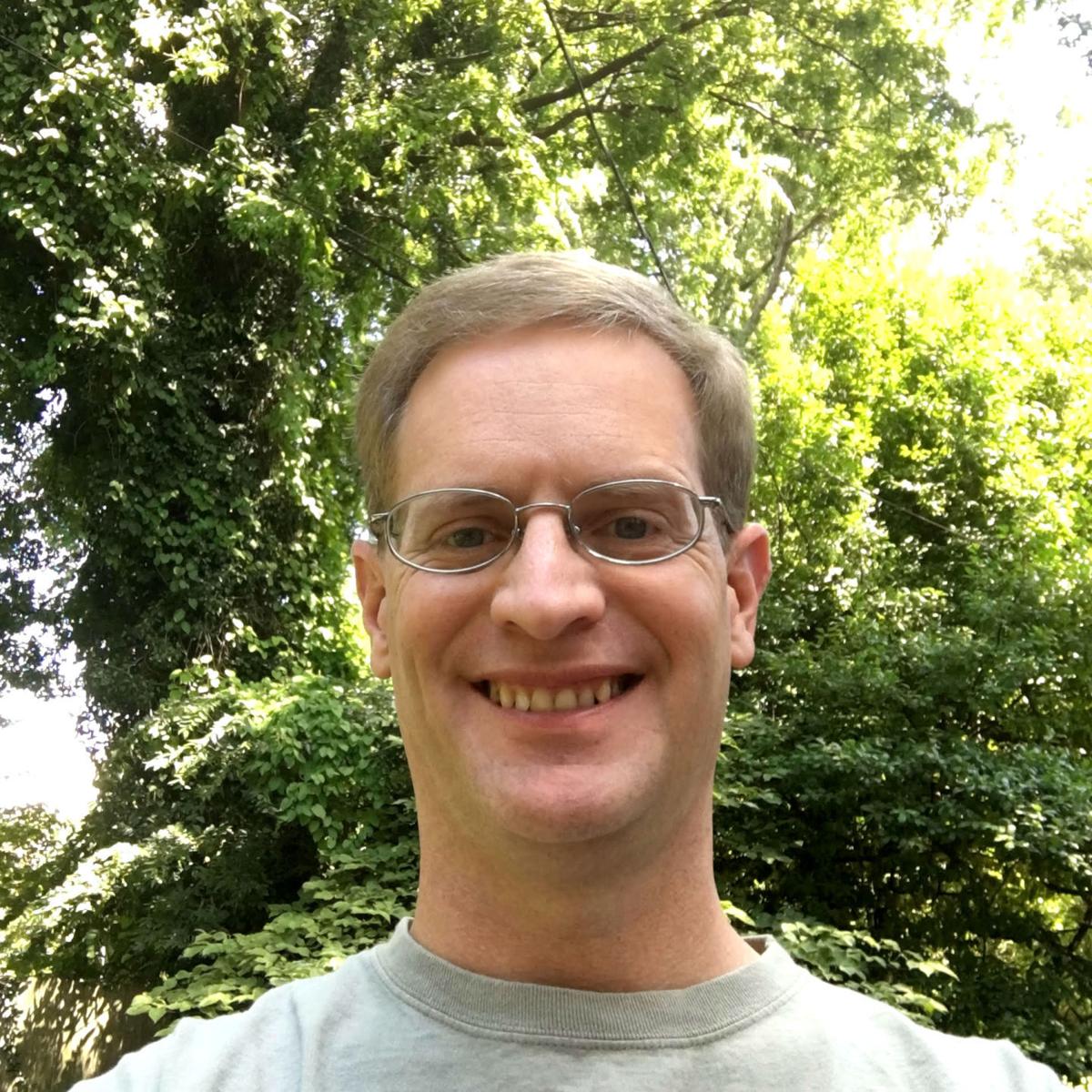